Picture This: St. Henry Is State-Bound

Jackson Center’s Trent Platfoot and Co. cut St. Henry’s nine-point lead to a one possession game in the final minute, but the Redskins’ pulled out the win to earn a Division IV regional title and trip to the state semifinals.

Kettering – As the St. Henry Redskins posed for another celebratory photo, senior Jay Knapke climbed on the massive shoulders of teammate Caden Niekamp. Consider it a picture perfect moment.

After giving the Redskins a needed lift Friday during the Division IV regional championship at Kettering’s Trent Arena, Knapke got one in return.

It took more than Knapke to hold off Jackson Center 46-43, of course, but the first-year varsity starter rallied the Redskins into the fourth quarter. He helped give St. Henry the lead for good by scoring eight of his team’s 10 points. His personal run started with 2:35 left in the third quarter when he scored off a rebound to tie the game 24-24. It ended with 5:08 left in the fourth to put the Redskins up 32-26. 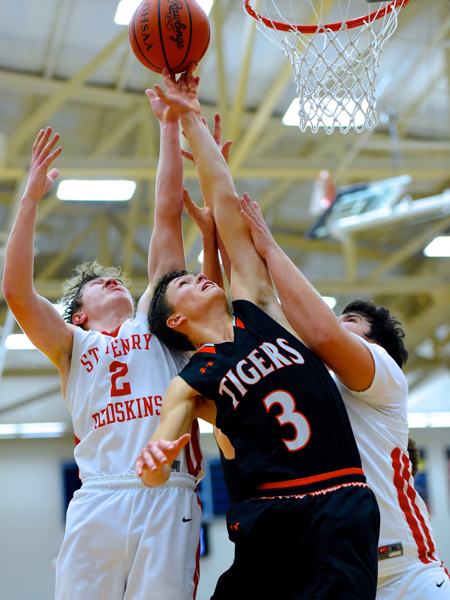 Platfoot put the Tigers on his back – and the Redskins on their heels – with an offensive blitz of his own. The senior scored 15 of his team’s 17 points in the fourth quarter. He had 23 of their 25 second half points in a relentless effort.

St. Henry led by a game-high nine points four times in the fourth quarter, the final time coming at 41-32 with 1:25 remaining. Platfoot hit four free throws and knocked down a three-pointer with 36 seconds left to will the Tigers to within 43-40.

After a pair of Zach Niekamp free throws, Platfoot sank another three with 20 seconds left to make it 45-43. Knapke missed the first bonus free throw to give Jackson Center possession. With 15 seconds left senior TJ Esser’s three-point attempt bounced off the rim. Caden Niekamp pulled down his game-high 11th rebound and sent an outlet pass to cousin Zach Niekamp, who was fouled. Niekamp missed the free throw with three seconds left.

The ball found Platfoot’s hands one last time, but his half-court heave just before the buzzer came up a couple feet short of the rim.

“That’s what a senior – that’s a great player – does,” Jackson Center coach Scott Elchert said of Platfoot’s effort. “We had an agreement before we left practice that he and I were going to meet for practice Monday. I think he was trying to carry through with his promise.” 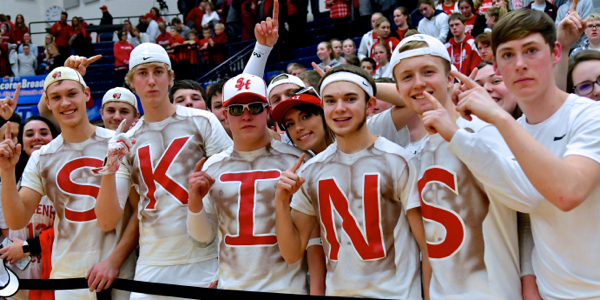 For these Redskins students St. Henry’s first regional championship since 2004 was, well, fan-tastic!

“Rosie (coach Eric Rosenbeck) is always saying he believes we are one of the better teams in Division IV. It was always in the back of our mind,” senior Zach Niekamp said. “When we started winning the games we started believing in it and stringing along wins.

“We have big expectations. When we go there we’re expected to win. That’s what we have to do.”

The goal for St. Henry coming into Friday night’s was threefold – limit Jackson Center’s 3-pointers, control the glass and be more mentally tough than the Tigers. Two out of three turned out be good enough. The Tigers finished 6-of-19 from 3-point range (31.6 percent). Some of those shots, especially in the first half, were rushed and NBA deep. The Redskins won the rebound battle 35-20 and contributed to 11 of St. Henry’s second-chance points (Jackson Center had five).

The St. Henry Redskins won the Division IV regional championship with a 46-43 win over Jackson Center on Friday.

As for being mentally tough, that one ended in a draw as both the Redskins and Tigers gave gusty efforts.

“That mental toughness paid off,” Rosenbeck said. “There were some big moments where momentum was on Jackson Center’s side with Platfoot going crazy like he did. But our guys came through with clutch free throws.”

Said Elchert: “The fact we fought back and put ourselves in position to tie or win the game speaks to our kids’ character. We were just one play short, I guess.” 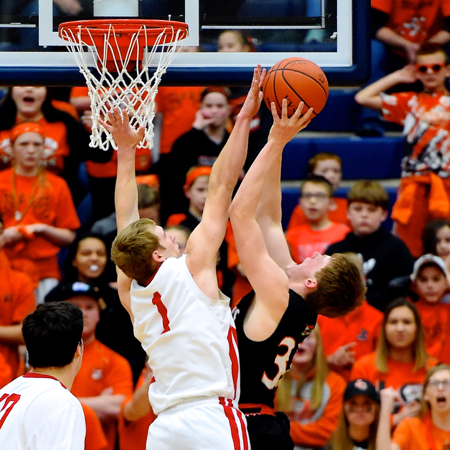 Jackson Center (22-6) was vying for its first trip to state since 2016 and fifth overall. The Tigers dealt with adversity early in the season with the loss of 6-foot-4 junior Calvin Winner. His post presence was missed this season, especially on defense. But the Tigers readjusted and settled into their roles to help the team finish second in the Shelby County Athletic Conference behind Anna.

The Tigers graduate four seniors off this team with Platfoot, Esser, Sean March and Joey Irwin. Platfoot led the Tigers with 28 points and Esser added seven points and eight rebounds.

“The thing that stuck out to me very early in the season was the chemistry of the 13 guys. I mean that,” Elchert said. “The support players have been incredibly great in their roles. The fact this team came together – we started the year without a 6-5 junior starter – so we had to overcome that obstacle right from the get go. I am extremely proud of the season these guys put together and the way they went down fighting to the bitter end tonight.” 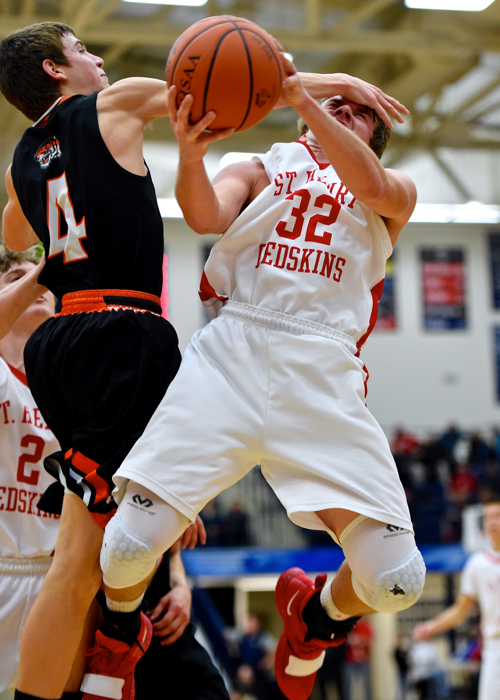 Nothing came easy in this one: St. Henry’s Ethan Thieman takes a foul to the face from Jackson Center’s TJ Esser.

“It means everything. We’ve worked hard as a team to get to this moment,” Knapke said.

Did he think his hard work – including those 6 a.m. weight lifting sessions in the summer and January and February – would result in his season that saw him go from JV to varsity starter?

“No, not really. I didn’t think I’d do this good. I’ve been working hard so it’s paying off,” Knapke said. “I just wanted to do whatever was best for the team to win. If that was starting or not playing at all, I didn’t really care.”

“I’ve said this 10 times if I’ve said it 100 times – Jay Knapke is the epitome of St. Henry basketball,” Rosenbeck said. “He’s making huge plays in the regional final. He just never stops. He’s relentless. That relentless paid off, especially in the fourth quarter.” 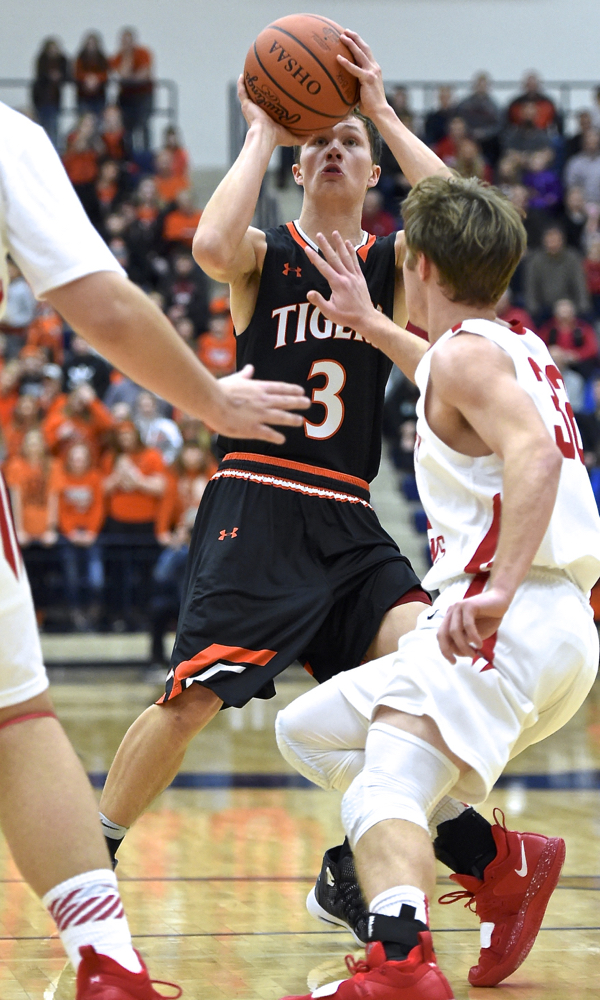 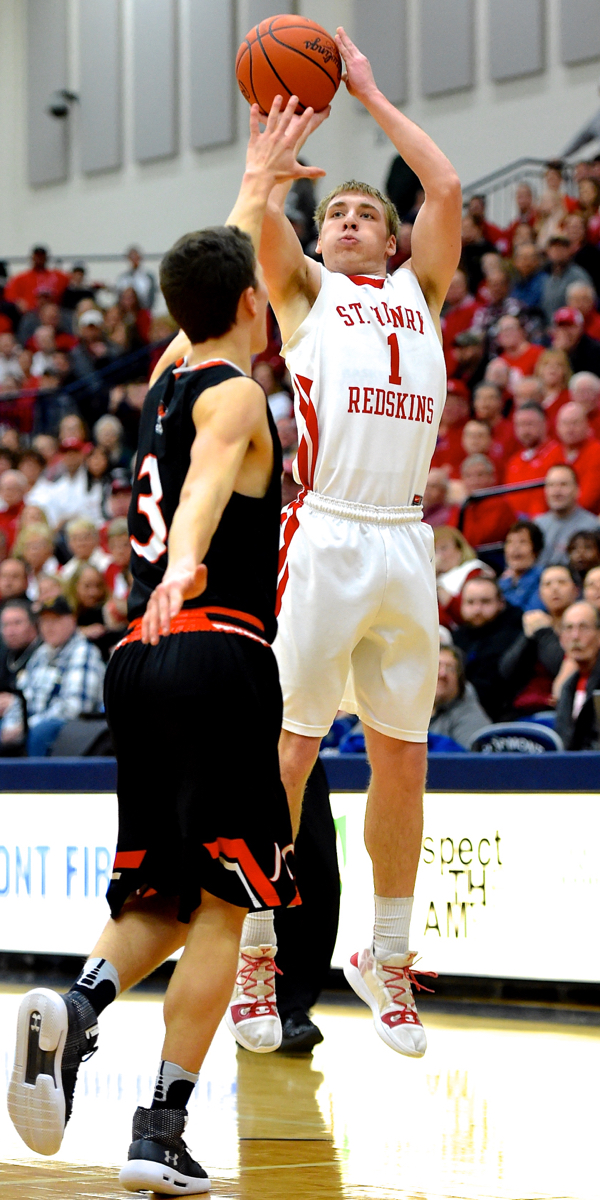