We get letters, you know.  Even at the state tournament.  And one we think you should know about (if you’re a basketball fan) is from a fan who says there’s another, even better, Coldwater story in this weekend’s boys regional.  Enjoy.

A devoted reader from southern Ohio was quick to comment on yesterday’s profile on Coldwater and coach Nick Fisher’s late-season surge towards the regional final and a possible berth in next week’s state tournament.  And he wrote overnight to share another story from Scioto County.

“Great write up on Coldwater. It is truly remarkable what they’ve accomplished, but let me share this with you.

Another amazing story is New Boston Tigers boys basketball. They’re playing in the regional title game on Saturday for the first time since 1960! They haven’t even played for a district title since 1985. Like Coldwater, they also didn’t win their conference, and their graduating class this May is 12 students. That’s right, 12 students, and that’s not a typo!

They’ve dropped their baseball program several times because of low numbers and lack of interest.  The town has been through extreme economic hardships, and they’ve lived in the shadow of Portsmouth basketball their entire existence (4 state titles, 4 state runner-ups, 15 Final Four appearances). The only reason anyone mentions New Boston is to eat at Hickies (if you’ve never been, you should). I don’t know about McSobers.

Their coach (Adam Cox) is a New Boston grad, very prideful of the village/people. My wife and I drove through this evening and you would think they just won the state title. Red and gray everywhere, all businesses displaying “Go Tigers” in their windows. If they beat #1 Berlin Hiland Friday night, it will be a modern day version of Hoosiers. 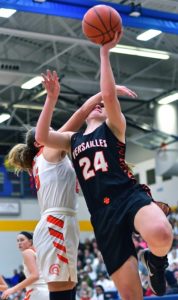 “I enjoy your coverage of high school sports immensely, and your story this week about the Jackson Center (?) – Fort Loramie game reminded me of when I played in the 50’s.  There was nothing unusual about 30-25 basketball games back then, and 55 points was a lot of points during the ‘set shot’ era.  However, you mentioned how ‘gruesome’ that game was, and the photos you show illustrate the point…that basketball needs some of the same considerations about rough play that football is getting.  I don’t have an answer, but I can tell you that it’s hard to watch basketball and believe that we’re as concerned about safety as much as we are with football.  You’re the only one that seems to write about this, but basketball has become frustrating to watch because skills have been replaced by speed and pure brute force.”  …  Pete Testerman

(Ed. Note:  We always enjoy hearing from your generation who played a different game back then.  Your points are interesting, especially since modern basketball minds like Jeff Van Gundy (commentator on ABC) advocates that calling fouls only slows down the game and makes it less interesting.  He recently said, “The players have a better sense of what’s a foul than the officials.”  Kids hear this, and hence, those shooting and basketball skills you wrote about are not a priority like they were in the 50s.)

“I appreciated your recent article about why adults behave badly at public events (basketball games).  You quoted someone anonym0usly who said:  ‘I’m actually afraid to go to a high school basketball game anymore, especially if it’s a game where there’s people you don’t know or recognize. It just scares me and I won’t go. You just never know.’  This person is not alone.  I rarely travel to away games for local basketball anymore for the same reason.  And let me add that when people act badly in public it’s a reflection of their personal lives, as well.  People in turmoil know nothing else.  You have a GREAT site.” …  Jack DePriest

(Ed. Note:  Thanks for the kind words, and the observation.  Oddly enough, people in turmoil spend more time justifying than fixing it.)