The offense came to life, only to see errors and the bullpen surrender a late lead.  The Buckeyes drop their third straight in Greenville, South Carolina, 11-10, to Furman, in ten innings.

Greenville, SC – Ohio State coach Greg Beals had waited for his offense to emerge during this final four-game southern tuneup to the 2019 baseball season…and he finally got his wish Monday night against the 4-9 Furman Paladins.  The Buckeyes erupted for 10 runs on 15 hits, highlighted by home runs by Brady Cherry (his 4th), and three-hit nights by Cherry, Dom Canzone, and a four-hit performance by Conner Pohl.

But another, different, nemesis struck them late in a 11-10 loss to the Paladins – one that showed up in the bottom of ninth inning.  A pair of throwing errors (the Buckeyes 3rd and 4th fielding miscues of the night), sandwiched with a pair base hits off freshman reliever Will Pfennig, cost them a 10-8 lead and sent the game into extra innings.

Unable to score in their half of the 10th, the Bucks saw Furman come to bat in the bottom of the frame and promptly win the game with a one-out home run from first baseman John Boswell.  It cost Pfennig his first collegiate loss and the Buckeyes their third in as many days. 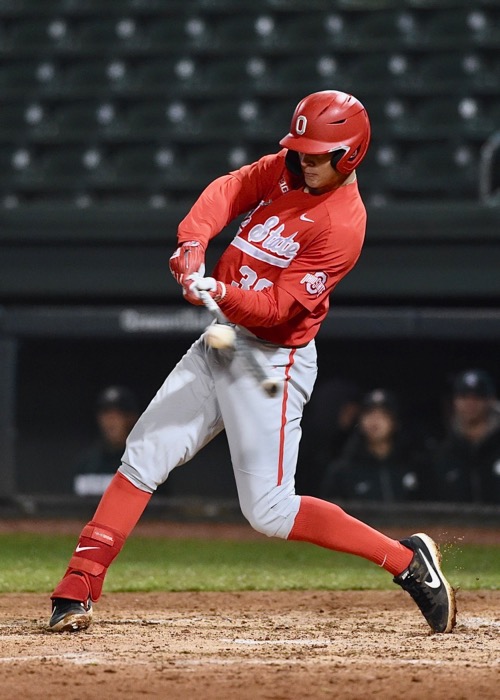 First baseman Conner Pohl had four hits in Monday’s game to raise his average to .259.

It also negated what had been their best offensive game of the season – 15 hits up and down the lineup, highlighted by Cherry, Canzone, and Pohl in the middle of the order, who collectively amounted for ten of the Buckeyes’ fifteen hits in the game.

In addition, outfielder Ridge Winand got three hits in four at bats in a rare start in center field, and Cherry drove in three runs.  Canzone and Pohl lifted their flagging averages to .263 and .259, respectively.

But a suspect starting performance by sophomore Seth Lonsway helped squander an early 3-0 lead and seemed to fuel Furman’s own offensive outbreak.

Lonsway pitched a scoreless first and second before giving up five runs in the third, and was charged with a pair of runs in the fifth before surrendering the mound to another freshman righthander, Bayden Root, who came on to retire the final out in that inning.  In all, Lonsway’s pitching line read 7 runs (5 earned), on 7 hits, 3 strikeouts and 4 walks while throwing 107 pitches. 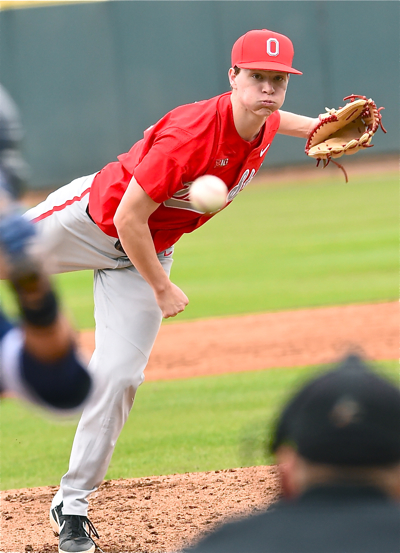 Freshman Will Pfennig took his first collegiate loss on a walk-off homer in the bottom of the 10th.

Root’s performance turned out to be the pitching highlight, as the freshman from Kokomo, Indiana scattered 4 hits over 3.1 innings and surrendered but one earned run.  He carried a 10-8 lead into the ninth inning after the Buckeyes struck for 5 more runs in the fifth (highlighted by Cherry’s 2-run homer), and single runs in each of the sixth and seven innings.  Pfennig came on in the ninth to protect that 2-run margin.

But the Buckeyes’ defense, a plus so far through the team’s first 14 games, hurt them in the ninth on a pair of throwing errors by Pfennig and shortstop Noah West on a fielder’s choice attempt at second base.  A subsequent groundout cut the lead to one;  and an infield single by centerfielder David Webel scored the tying run.

After retiring the first out of the 10th, Pfennig then threw a 1-1 fastball to Boswell who drove the pitch out to left center for the winning, and walk-off, home run.

The Buckeyes have now dropped three straight on this final southern trip of the season, and will seek to salvage a win Tuesday against Wofford College (10-6).  Junior Jake Vance gets the start, seeking his second win of the season. 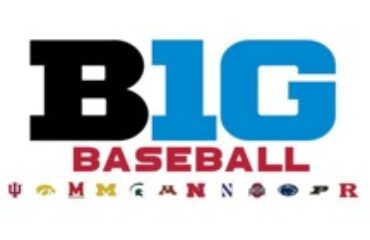 Things You See, And Some Ballpark Stats…. 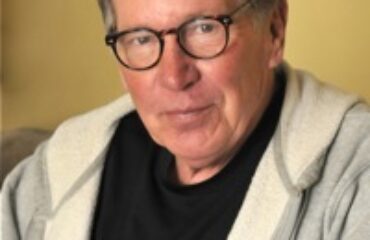 Ohio State Counting On Knowles To Be “Fixer” On Defense