The games were different, but the results the same. Versailles started fast and then held on, while Anna pulled away late to win Division III district titles. 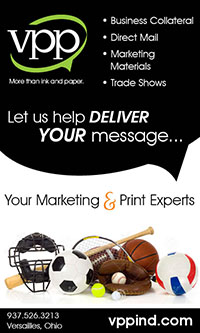 A year ago, both the Versailles Tigers and Anna Rockets went to UD Arena looking for district titles that would extend their seasons.

The Tigers, even with All-Ohio player Justin Ahrns, never figured out Madeira’s defense and fell to the Mustangs 57-51. The Rockets ran into an athletic Purcell Marian squad and fell 78-65. 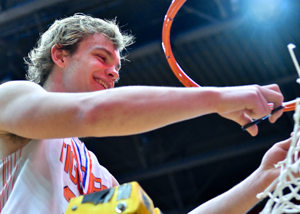 Evan Hiestand’s 12 points helped the Tigers cut down the nets.

Versailles, a 10-loss team during the season, had surprised two twenty-win teams in Twin Valley South and Brookville to advance to their third straight district final. Led by 5-10 junior guard Michael Stammen, the Tigers jumped to a big lead, turned back every challenge from the Reading Blue Devils, and trailed for just 20 seconds in a 47-44 win for their second district title in three years.

Anna, champions of the Shelby County League, found themselves in a back and forth affair with Clark Montessori. Trailing by 4 at the break, the Rockets tightened up their defensive effort, dominated the glass in the second half, and dumped the Cougars 68-59 for their first district title since 2010. 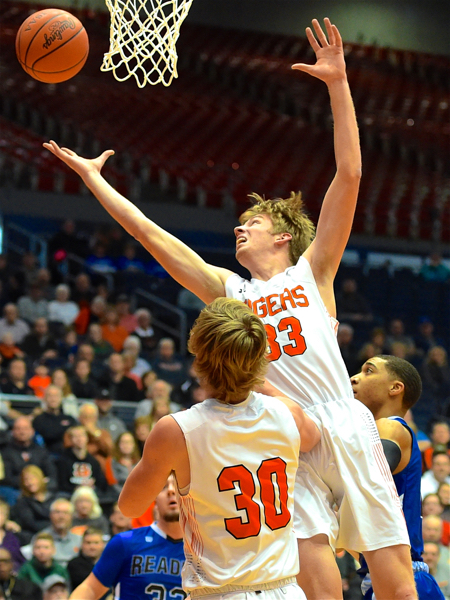 Austin Toner chipped in 7 points and 9 rebounds for the Tigers’ win.

Both teams move on to the Regional semifinals Wednesday night at Trent Arena. Versailles will meet 15th ranked Purcell Marian, a 51-31 winner over National Trail, at 5:30, followed by Anna and Stivers at 8. Stivers eliminated defending state champion Deer Park 76-62.

The Tigers join St Henry and Coldwater s MAC teams in the Sweet 16, while Anna is the third Shelby County League team, along with Fort Loramie and Jackson Center, to still be playing next week.

Versailles 47, Reading 44—The Tigers jumped to a surprising 13-0 lead but had to hold on down the stretch for their 15th win of the season. Reading had the ball with a chance to tie and 21 seconds left, but the Tigers  defense stood tall and the Blue Devils didn’t get a good look.

“I told one of the guys here at UD, sometimes we aren’t the prettiest team,” said Versailles coach Travis Swank after running his three year record to 60-17. “Our numbers  aren’t very good. I know we shot well from the floor, but we had 18 turnovers and struggled from the line. We just gutted it out. Our kids have a lot of heart and that’s been the story of our season.

“We only have one senior, and a lot of inexperience at the varsity level. We play pretty well when we have time to prepare for someone. We played well on Friday nights and struggled on Saturdays, but we have grown up as the season has gone along. We showed up ready to play today, and it paid off in a district championship.” 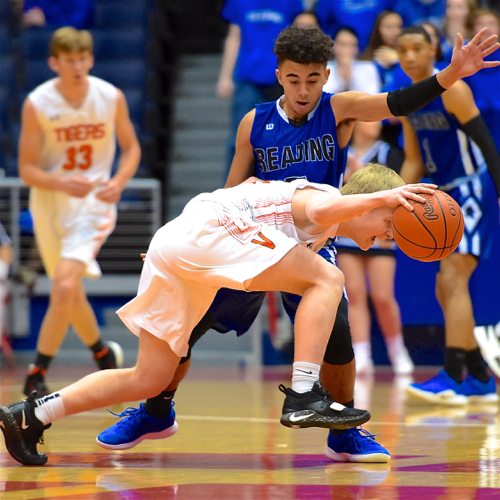 Versailles Michael Stammen was leading scorer for the Tigers with 14 points.

Stammen did a little bit of everything for Versailles– 14 points, 5 rebounds, and 3 assists. But he had plenty of help. Evan Hiestand had 12 points and 8 rebounds, and Austin Toner had his best game of season, scoring 9 points to go along with 7 rebounds.

Reading, which finished 18-7, got 23 points from Brandon Ross and 12 from AJ Brown, but the rest of the roster tallied just 9 points on 3 of 22 shooting. Versailles shot 59% from the floor and dominated the glass 28-17 but had to survive an 11-19 performance at the foul line and 18 turnovers.

Swank praised the play of Stammen.

“We feel pretty good about our ability to spread the floor with him running things. He still made some mistakes, but did things well enough to keep us in front. He made a couple of real nice passes late that got us in position to win the game. Everybody we played contributed. It was a real team win. 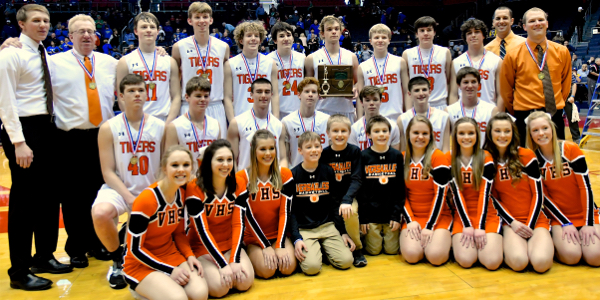 “I’m just happy for the guys. We are excited to still be playing. We will show up and compete, like we have all season.

Anna 68, Clark Montessori 59–  The Rockets, champions of the Shelby County League and ranked 8th in the state, trailed the unheralded Cougars 36-32 after giving up 19 fast-break points in the first two quarters.

“We talked about being resilient,” said 8th year Anna head coach Nate Barhorst. “We just had to figure out what adjustments we needed to make, which included getting the ball inside and shoring up our transition defense. We gave up way too many transition buckets in the first half, but did a much better job in the second half.” 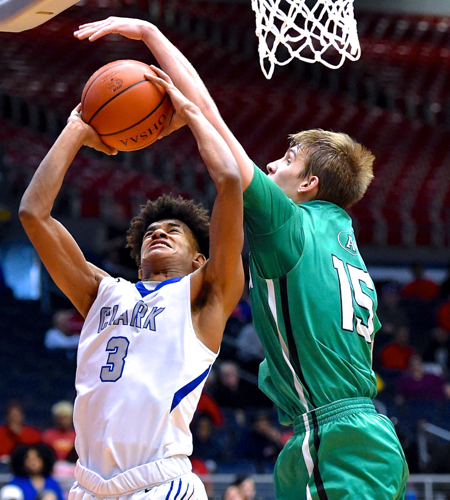 Griffin Doseck had a double-double with 13 rebounds and 21 points.

Anna regained the lead late in the third quarter, and finally got a little breathing room on an Issac Lininger three pointer early in the fourth. Anna stretched the lead to 13 with just over two minutes to go, but back to back threes by D’Shawnti Hawkins kept the Cougars alive until the final minute.

“The Lininger three was huge, because it gave us a little daylight,” Barhorst continued. “But he also came up big with eleven rebounds. Anytime you get that from  guard, that’s huge.

“They didn’t have an answer for Griffen down low, and when they did double him, our kids did a nice job of cutting to the basket. That and our transition defense was the difference in the second half.”

Hawkins was a pain in the Rockets side all night, scoring 15 points in the first half and 12 more in the final period on his way to a game high 29. Anna had a great 1-2 punch, as Bart Bixler scored 23 points and Griffin Doseck added 21 to go along with 13 rebounds. 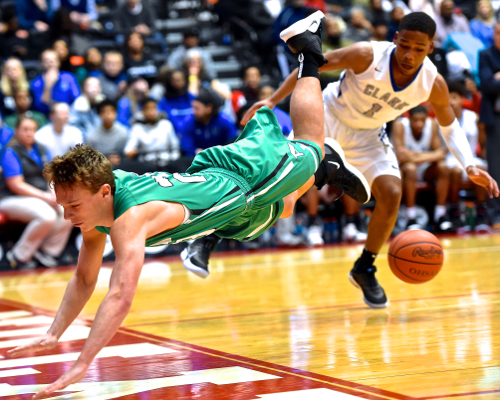 Bart Bixler flew out of bounds, hustling to save a Rockets’ possession.

Anna had a massive 44-23 edge on the glass, including 13-4 on the offensive boards. The Rockets shot 46% from the floor, and was 22 of 33 from the line.The Anna coach said last year’s disappointment has fueled this year’s club.

“Beginning in the off-season, our goal was to get over the hump. We wanted to get back here and prove that we could be a great team. Our guys have a great chemistry, and you could see it coming together as the season went along. “

Barhorst said the first district title in nine years was important to him at his alma mater.

“It means that we are starting to get some success and hopefully, that success will lead to more success. That it will get more kids excited about basketball. Get them into the gym working on their basketball skills. Our goal is to get to the point when getting here every year is a legitimate goal.” 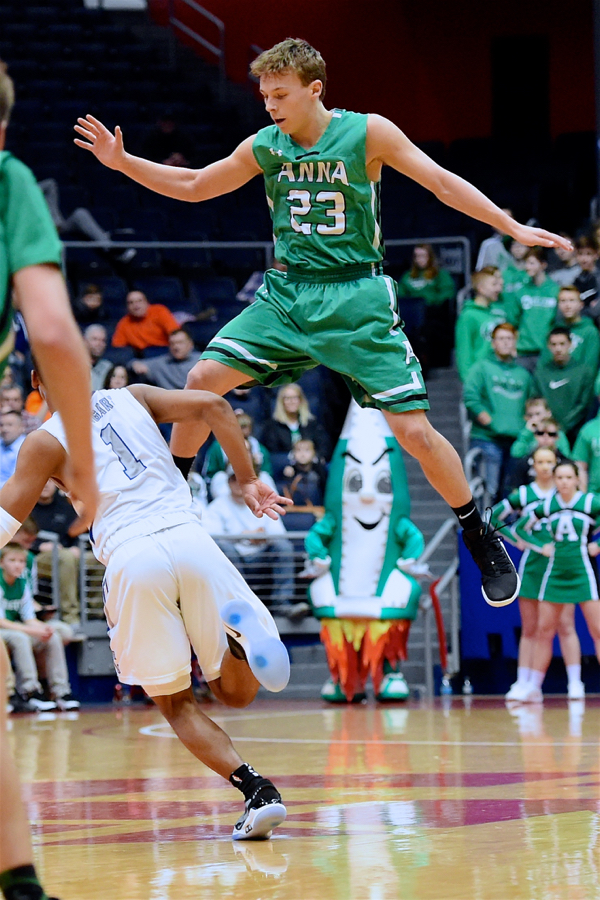 Bart Bixler had a team-leading 23 points to lead the Rockets over Clark Montessori. 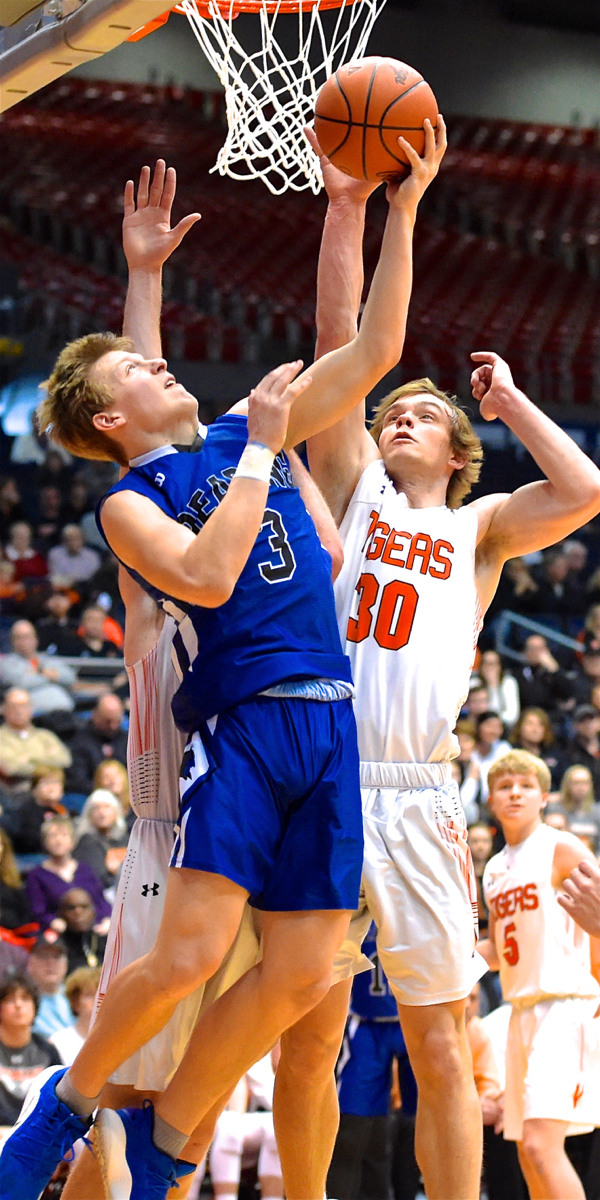