Greenville, SC – To say that Michigan State junior Mike Mokma was good Saturday night in the First Pitch Invitational here in Greenville…was to say that Otis makes elevators.  He was good, and then some.

The 6’7″ junior from Holland, Michigan, threw MSU’s first complete game in two years, struck out 11 Buckeyes, walked none, and scattered 7 hits while giving up a single run in the sixth inning.  He notched his first decision of the season for the 3-10 Spartans, 7-1.

Mokma threw hard, in the low to mid 90s, but his velocity was not what made him so effective.  Rather, it was his command.  He routinely pitched ahead in the count, threw his fastball to good spots, and had Buckeye hitters on their heels all night long.

“He was the story of the game,”  said OSU coach Greg Beals.

And if you believe in baseball omens, it couldn’t have come at a better time for a club that has admittedly struggled through the first month of the season.

“It was a lot of fun,”  said Mokma afterwards, the understatement of the still-young season.  “To be out there with the boys and have a night like this…it doesn’t get much better than that.  We put seven runs up and this is absolutely something we can build on going forward.  It’s fun when you get that kind of support.”

Buckeye starter Garrett Burhenn did not have that kind of night, or fun.  The freshman from Indianapolis had his first taste of being off his game as a collegian, giving up 12 hits and 7 earned runs in the first five innings.  But reliever, and fellow freshman TJ Brock restored some lustre to what was an otherwise disappointing night for the Bucks’ pitching staff. 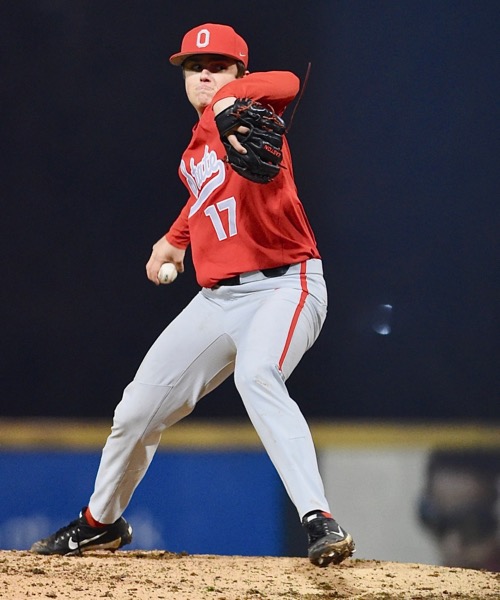 Freshman TJ Brock (Summit Country Day) had his best outing of the young year – 3 innings pitched, no hits, 5 strikeouts, and no walks.

Brock, from Cincinnati’s Summit Country Day High School, was simply superb in working the game’s last three innings.  He faced the minimum number of batters (9), allowed no hits, struck out 5 and walked none while lowering his earned run average to 2.16 (8.1 innings).

And, he did all this while battling the flu.

“I didn’t feel very well all day,”  he admitted afterwards.  “I had some fever and threw up a couple of times before the game.  It’s not easy to pitch when you feel like that, but I wanted to be ready when they called me.  I wanted to put my team in the best position to win and I’ve been working really hard with Coach DeLucia on balance and some other things that have helped me.  We didn’t win today, but I know we’ll come back the rest of the weekend and be ready for the season [at home].”

On a team loaded with talented young arms, Brock, Will Pfennig, Mitch Milheim, and Cole Niekamp (all freshmen) are well aware of each outing moving them either up or down in the pecking order of trust.  Saturday’s outing was Brock’s fourth of the year, and by far his best.  No doubt, it bought him some positive consideration in the near days to come.

“Yeah, I was happy to show [the coaches] what I could do, to show the team what I can do, and I’ll be ready for the next go-round.  Hopefully next time I can get us a win.”

In addition:  Sophomore lefthander Griffan Smith is the probable starter in Sunday evening’s game with Western Carolina, scheduled for 5 pm.  The Buckeyes then play Furman on Monday, a game that was originally scheduled for Friday but postponed due to rain.

They didn’t hit much in Saturday’s loss, but one bright spot was the hopeful emergence of Conner Pohl from his early-season woes.  Pohl had a double and single in four at bats and raised his average from .171 to .200.  Noah West continued to hit (1 for 4), and Nate Romans and Malik Jones both finished Saturday’s game with a hit in three official at bats. 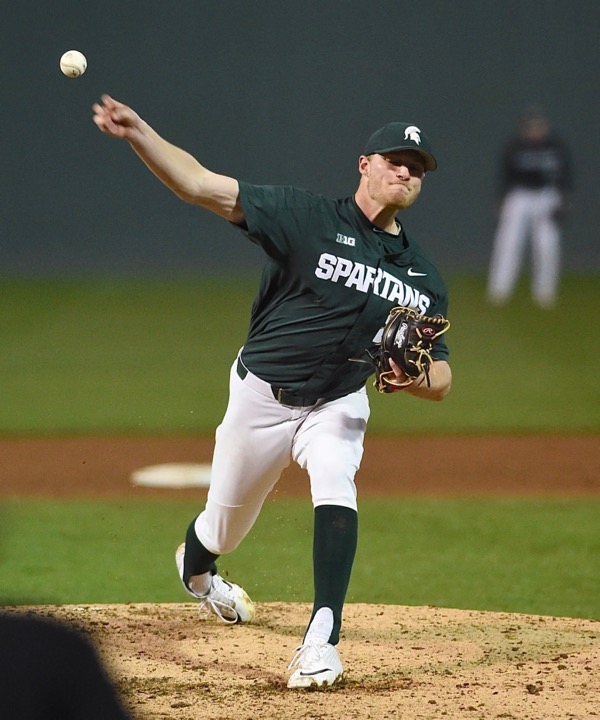