In his own words, Andre Gordon and the Sidney Yellow Jackets gave it all they had.  But it wasn’t enough as Springfield knocks them out of the tournament for the second year in a row.

Vandalia – Student Activity Center at Vandalia Butler High School has become a home away from home for the Sidney Yellow Jackets.

After suffering a 20 point loss to Centerville in the sectional finals three years ago, Andre Gordon and company had won 5 straight at the SAC, defeating the Butler Aviators three straight seasons, and knocking off Carroll and Springboro in this years sectional tournament.

Saturday’s sectional final against Springfield looked to be a severe challenge to that winning streak.

The Wildcats brought a deceiving 15-9 record into the contest. Springfield lost to Pickerington Central (#2 in the final AP state rankings), Cincinnati Moeller (#1 in Division One), Trotwood (#1 in Division Two) and lost to Prolific Prep of California at Flyin’ to the Hoops. Led by 6-4 senior guard RaHeim Morris’ 18 points per game, the Wildcats had blown out Tecumseh and Troy in the first two rounds of the tournament. They were anything but your typical nine-loss club.

Add to the equation that the Wildcats beat Sidney 63-62 in last year’s sectional final when Gordon’s last second shot fell short (after he appeared to be fouled on the attempt), and the big crowd that made their way to the SAC had every reason to expect a classic.

While the game was in doubt until the final minute,  it was deja vu for the Jackets as they fell 65-60 to end their season  20-4. 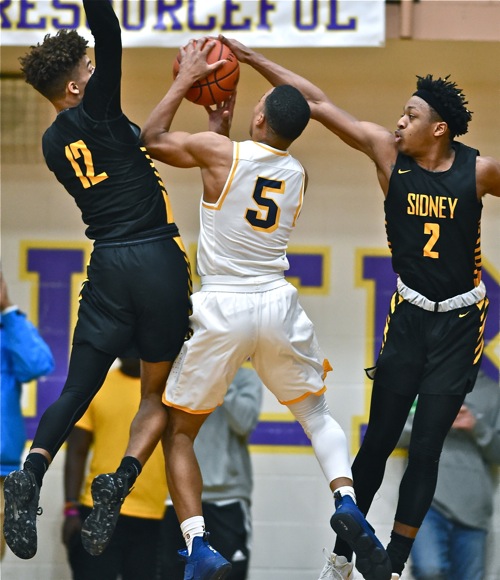 “I thought we fought as hard as we could,” said a disappointed Sidney coach John Willoughby. “They are a really good defensive team. Everybody they put out there plays defense, and it was tough to get open looks. They contested everything.

“I think we just got a little stale offensively in the third quarter. We took some elbows to the face and didn’t get any calls. I don’t know what was going on there. But both teams played hard and clean, and I commend both teams for that.”

“Our game plan was to play them straight up,” said a smiling Springfield coach Isaiah Carson. “Andre Gordon is great and we wanted to have a little help with him. Overall I thought we did a great job.”

Gordon finished his high school career as the first Yellow Jacket with 2,000 career points. The milestone came on a third quarter free throw. Gordon finished with 2,013 points, and an equally amazing 550 assists.

Sidney was in control most of the first half. While Gordon didn’t score in the first quarter, five of his teammates did as Sidney led 13-7 after 1. Springfield was a chilly 3 of 17 from the floor in the opening 8 minutes, and was probably fortunate to be a close as it was. 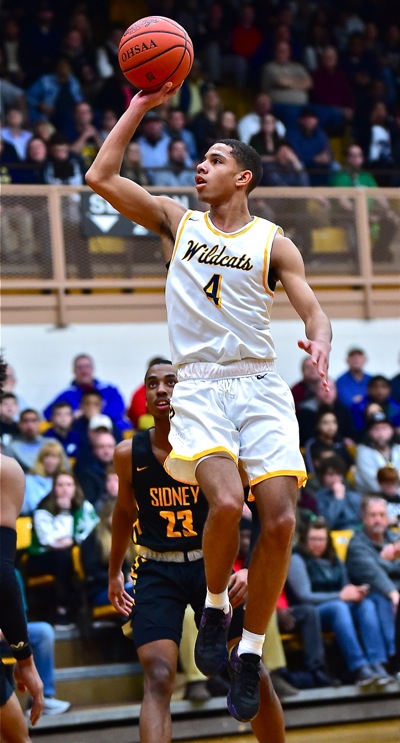 Springfield’s David Sanford scores from the paint in Saturday’s win over Sidney.

“Josiah Hudgins played really well tonight and I’m glad for him,” explained Willoughby. “Our subs played the way they were supposed to. Dominick (Durr) played a lot tonight and that’s good for him heading into next year. We probably didn’t get Ratez (Roberts) involved enough. We just got stagnant in the third quarter and couldn’t come back from that.”

Both teams warmed up in the second quarter. Gordon’s first hoop came on a drive 38 seconds into the period to give the Jackets their biggest lead of the night at 15-7. Springfield finally got rolling with a 13-3 run, but a Gordon triple gave the Jackets the lead at 21-20, and they took  a 30-25 lead to the locker room.

“That first half, we weren’t playing Wildcat basketball,” explained Carson. “I thought we took some quick shots early and we just couldn’t get in our groove. We didn’t execute from the start, but we did in the second half. We got off to a good start in the third quarter, were able to get to the rim, and made some free throws. That helped a lot.”

Sidney held Moss, the Wildcats leading scorer, in check for the first 16 points as the senior had just four points at the break. Moss scored 8 points in the third period, and David Sanford added 7, including a pair of threes, as Springfield outscored the Jackets 21-15. Sidney was just 2 of 10 from 2 point range in the quarter, and only a pair of threes from senior Josiah Hudgins and another triple from Gordon kept the Jackets in it.

Leading 46-45 heading into the final 8 minutes, the Wildcats scored the first 5 points of the quarter to go up 51-45 and force a Sidney timeout. The Jackets cut the lead to 2 on a couple of occasions, but never saw the lead again. Sanford made 6 of 8 free throws down the the stretch as the Wildcats advanced to next weeks district tournament at UD Arena.

Gordon had a game high 25 points in his final game, including 8 for 8 at the free throw line and three threes. Hudgins finished with 12 points, as did fellow senior Ratez Roberts.

“We gave it everything we had,” a subdued Gordon said before boarding the bus. “Everyone was pushing. The seniors gave it their all. That’s all there is to say. 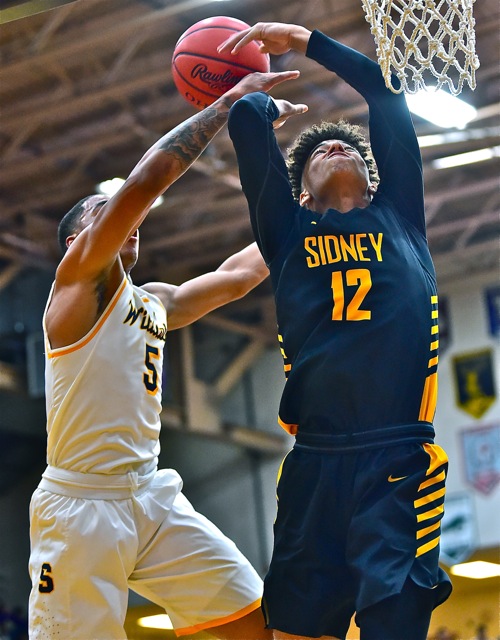 Springfield’s defense was a problem for Sidney – Lathan Jones (#12) get his shot attempt blocked by RaHeim Moss.

“100% happy with my senior season. We had the most wins over 4 years, we won 20 games this year for the first time,  ‘Tez (Roberts) and I set some records, we had a lot of guys step up when others were down. It is bittersweet. I’m just sad I won’t get to play with these guys again. That’s the bad part about tonight.”

Moss led the Wildcats with 17 points, while Sanford finished with 11 of his 13 points in the second half. Larry Stephens added 12 for Springfield.

The Wildcats had a massive 36-21 advantage on the boards, including 15-4 on the offensive glass. Both teams had trouble taking care of the ball in the fast-paced game, as Sidney had 18 turnovers to Springfield’s 16. 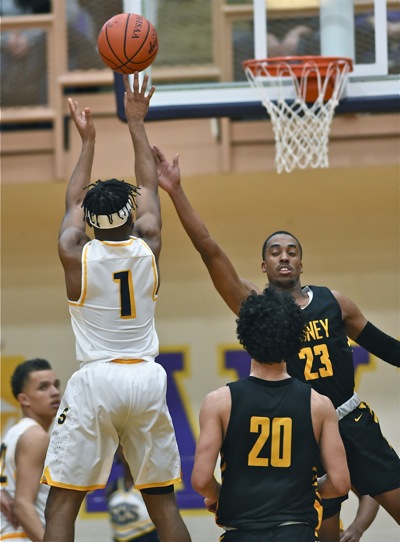 Springfield’s shooting picked up in the second half – Larry Stephens hits a jumper over Josiah Hudgins.

“I’m always sad when the season ends, but especially with this group,” Willoughby said, taking a moment to compose himself. “I knew them before I even came to Sidney, and they were so welcoming and easy to coach. That is not always the case, and I am very grateful for that.

“We ran down the list of accomplishments in the locker room after the game. Doesn’t mean much to them tonight, but someday it will.  A twenty win season, most wins in four years, I think the most tournament wins, and this group had a tremendous relationship with the community and the fans. I think that is the best thing about this season. We had some tremendous crowds the last three years, and much of that has been because of the seniors. That is something to really be proud of.”

Willoughby, who is 56-18 in three years as coach of the Jackets, had some final thoughts on Gordon. 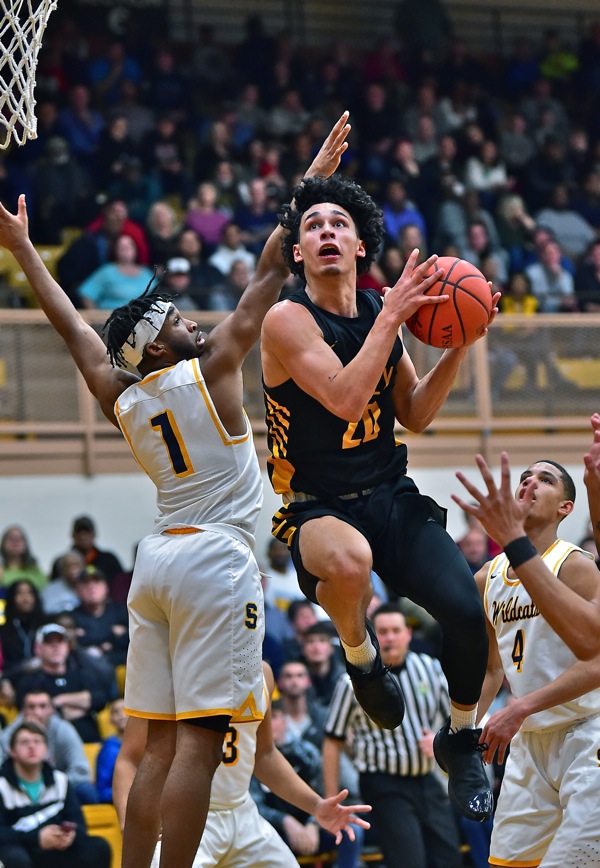 Andre Gordon scored his 2,000th career point on a drive to the rim in the third quarter of Saturday night's sectional final with Springfield. (Press Pros Feature Photos by Sonny Fulks)