Ohio State Does It All…6-0 Over Bethune-Cookman

The Buckeyes were a precise situational baseball team from top to bottom in making up for a stinker of a loss in the opener of the four-game series.

DAYTONA, Fla. – For those who grew up watching steroid-infused home run derby and now see present day upper-cutters with their all-or-nothing swings, it sure had to look like Ohio State was re-inventing the game of baseball on Saturday night.

Maybe they read up on the life and times of Jackie Robinson, whom the stadium here is named after.

It could have been the father-son type talk head coach Greg Beals had with them after another one-run loss in the series opener Friday.

But it probably was all that pull- and power-happy failure sinking into their gray matter and Beals throwing in strong reminders like a preacher on the pulpit.

The result was a nearly picture perfect 6-0 victory by the Buckeyes over Bethune-Cookman in the second of a four-game series that both teams need to win to establish their footing.

Ohio State (6-4) had four opposite-field hits, put down a sacrifice bunt and a bunt for a hit, hit two sacrifice flies and turned three double plays.

There were no errors and everyone in the batting order was responsible for at least one run.

“We did a lot of things good tonight and maybe what happened before was a characteristic of some youth and inexperience early in the season,’’ Beals said. “Our guys responded and responded very, very well. I told them that that’s the ball club I’m fighting for and that’s what we’re capable of doing. You’ve got to be locked in mentally to do all those things.’’

There are 46 regular-season games remaining, and he wants the club to try to duplicate this effort as much as possible.

“Our ball club has to show up daily with that mindset of being excellent and being totally engaged in the baseball game and being able to fight through struggles,’’ Beals said. “This was a team effort what we put up today.’’

Junior right fielder Dominic Canzone went 3-for-5 with a run-scoring single, threw out a runner at third with a laser beam strike and scored from second on a wild pitch. 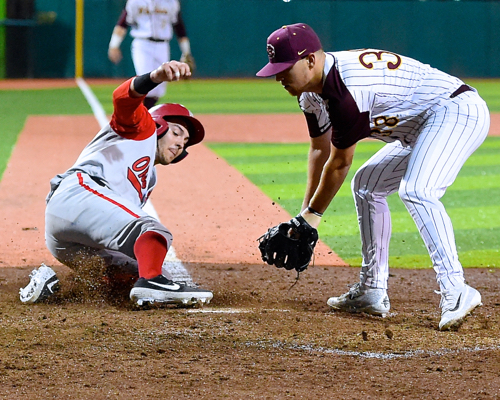 Dominic Canzone scores from second base on a wild pitch.

True freshman right-hander Garrett Burhenn (2-0) was magnificent in giving up seven hits and two walks and striking out five in 6 1/3 innings. He threw 87 pitches.

The Buckeyes began playing textbook baseball from the get-go as Noah West led off with a double into the left field corner and moved to second on a checked swing that was good for a sacrifice bunt by Matt Carpenter.

“I think we had a much better approach today,’’ said Carpenter, who had a bunt single in the fifth, walk in the seventh and single in the ninth. “We came with a little more focus staying on the fastball. We hit it up the middle and the other way. West did a great job of setting the tempo right away. We were disappointed in ourselves and knew we could play better. There was a lot of focus today. It was good pitching, good defense and timely hitting.’’

Canzone kept the line moving with a single to right to drive in West and Brady Cherry had a sacrifice fly to center to plate Canzone.

The baseball only got better by the inning.

“It was more of that was enough of (what we were doing) because we weren’t playing the way we wanted to play,’’ Canzone said. “Today, we just trusted the guy in front of us to do the job, and that made it easier for the next guy. That takes the pressure off of everybody.’’

In the fourth, Cherry led off with a single to center, stole second, went to third on a wild pitch and scored on a sacrifice fly to center by Nate Romans. 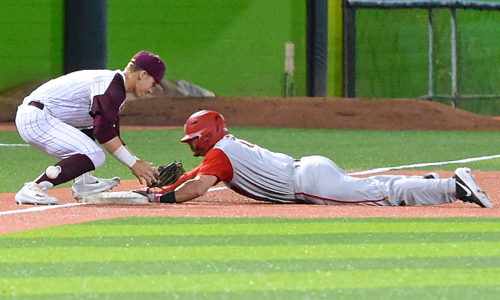 Brady Cherry safe at third on a stolen base attempt.

Malik Jones, a right-handed batter, made it 4-0 in the sixth by scoring Brent Todys from third with a groundout to first base. Todys led off with a walk and went to third on a double into the right field corner by Zach Dezenzo.

There was even more textbook play in the seventh when Carpenter led off with a walk, went to third on a single to right by Canzone and scored on an opposite-field single to left by Marcus Ernst.

Then came a hustle play with two out in the inning when Canzone scored from second base on a wild pitch to make it 6-0. He was going with the pitch.

“Beals-y saw it and sent me after he saw that I got a great jump off the pitcher,’’ he said. “He wasn’t looking at me at all. I saw that it went straight to the backstop, and with two outs it was a good time to go.’’ 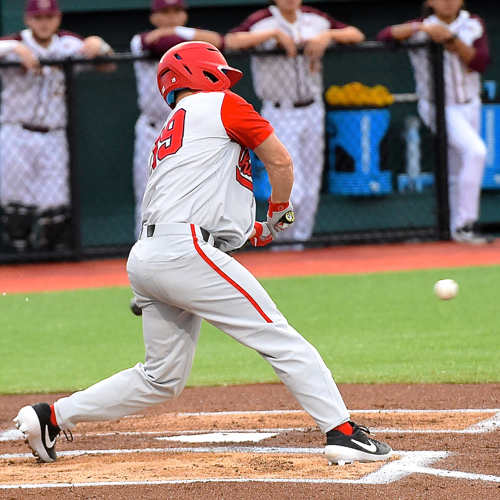 Matt Carpenter went 2-for-3 and scored a run.

Burhenn certainly didn’t get lost in the shuffle by showing great poise several times when all hell appeared to be about to break loose at any moment.

He started two double plays on come-backers and made a head-first diving catch of a popped up bunt.

His biggest inning of potential peril came in the fourth when he gave up three hits.

But Canzone erased Nate Sterijevski trying to go from first to third on a single to right by Brandon Wilkes and Burhenn got Over Torres to hit into a double play comeback grounder.

“I honestly was surprised he went,’’ Canzone said of his 12th career assist. “The ball was hit pretty hard in that situation, and I definitely was coming up gunning. Z (Zach Dezenzo) made a perfect tag.’’

Freshman left-hander Mitch Milheim got into the act by coming on with one out and a man on in the seventh and got an inning-ending double play grounder to short.

Burhenn has been pitching like the team’s second ace. 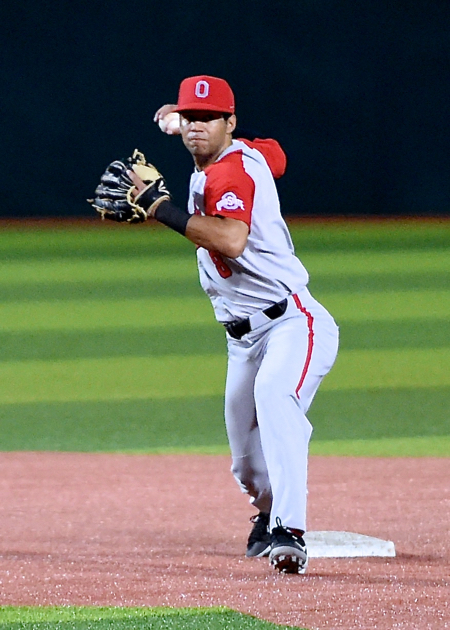 “I was just trying to pinpoint the fastball and throw to the outside,’’ he said. “I worked that two-seam to righties.’’

As for showing so much poise with runners on, he said that was ingrained in him long ago.

“My parents and every coaching staff I’ve been around have told me to be humble, trust my defense, make pitches and not dilly-dally around,’’ he said. “I trust Staff (pitching coach Mike Stafford) to call the right pitches. I just focus on the next pitch and don’t worry about the runners because in some situations we have one out and if I execute the pitch we can roll a double play. I knew they were going to get hits.’’

“What helped was putting up two in the first and allowing a rookie (Burhenn) settle into the ballgame,’’ he said. “Garrett commands his fastball very well and that’s what makes him so good at such an young age. That fastball is not straight. There is some sink to it. I never question where Garrett is at mentally. He’s a mature young man.’’ 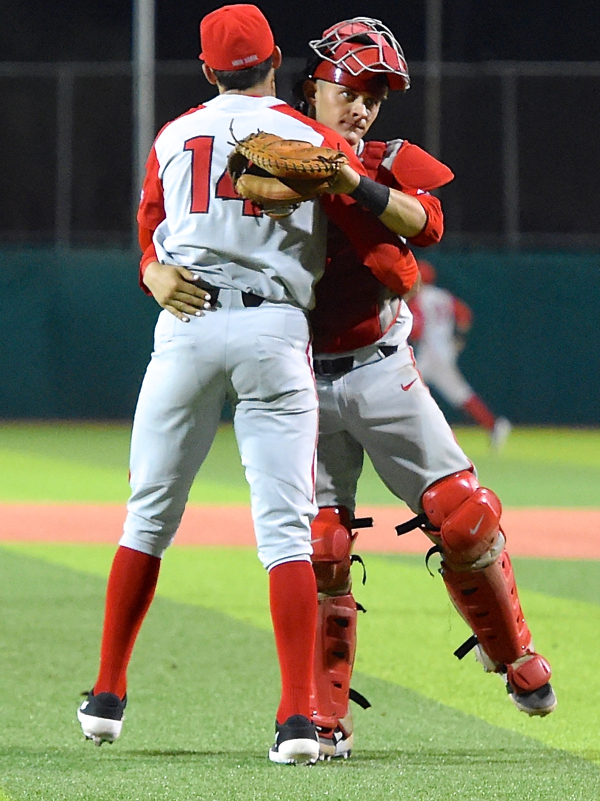 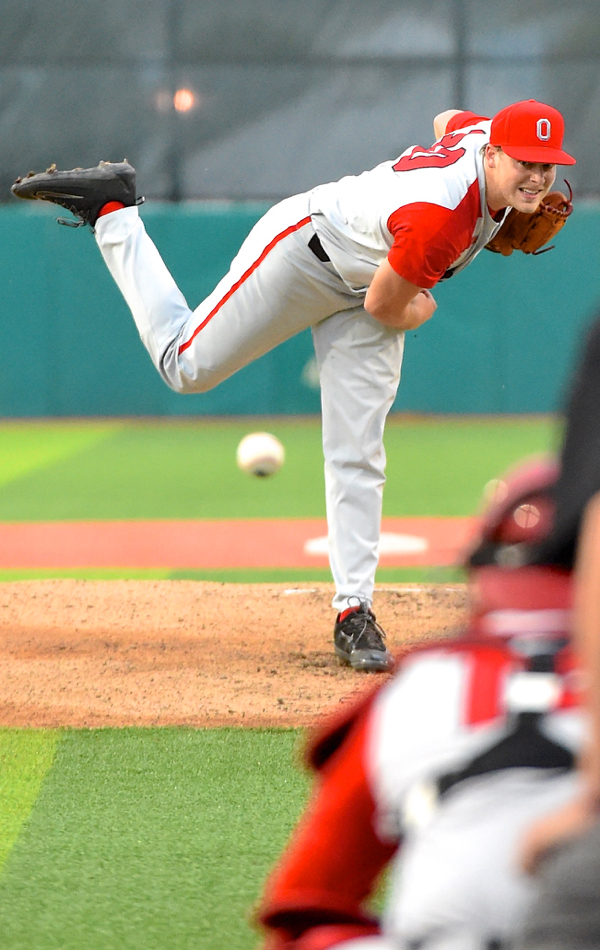