The Buckeyes lack of quality at bats, especially with runners on base, strikes again in their third one-run loss in four games.

DAYTONA, Fla. – The slim crowd had filed out of Jackie Robinson Ballpark long ago and some Bethune-Cookman players had even showered and were heading home when Ohio State coach Greg Beals was still talking to his team in right field.

It wasn’t a chewing out or lecture as much as the veteran coach telling them that their track record has been too good for them to be squeezing the bats way too tightly in trying to do way too much during an at bat.

The Buckeyes received a quality start from redshirt freshman left-hander Seth Lonsway that was stupendous at times, but five hits and four walks from the batting order took them about as far as a kid can swim in water wings in the nearby Atlantic Ocean.

Bethune-Cookman right-hander Anthony Maldonando didn’t give up a hit until two were out in the seventh inning, and his teammates made seven hits and six walks go far in a 4-3 victory over Ohio State on Friday night.

It was the third one-run loss in four games for the Buckeyes (5-4).

“That strikeout number is not where I want it to be,’’ Beals said of 81 strikeouts in 279 at bats. “Hopefully, they see that and do a better job offensively in situations. We’ve got older guys who are trying too hard and not trusting in themselves. We’ve got to play more relaxed. You look at the box score and you can see they are trying too hard. They are good ballplayers. They need a couple of big hits to get them going.’’

The team batting average has sunk to .222.

Ohio State had no answer for Maldonado until the seventh, when he obviously got tired and gave up three straight hits that brought home a run.

Maldonaldo, who was voted the Mid-East Athletic Conference pitcher of the year last season, allowed walks to Kobie Foppe with one out in the first and to Brent Todys with two out in the fifth.

By the sixth, he was animated after every out, to the point of catching the baseball with his bare hand and talking to no one in particular around the grass near the mound.

Brady Cherry ruined his night by beating out a grounder to shortstop Nate Sterijevski on a 3-and-2 count. Sterijevski gloved the ball with a knee-first slide, but his throw was late and up the baseline.

Conner Pohl followed with a sharp, clean single to right-center and Brent Todys drove him home with a single up the middle. 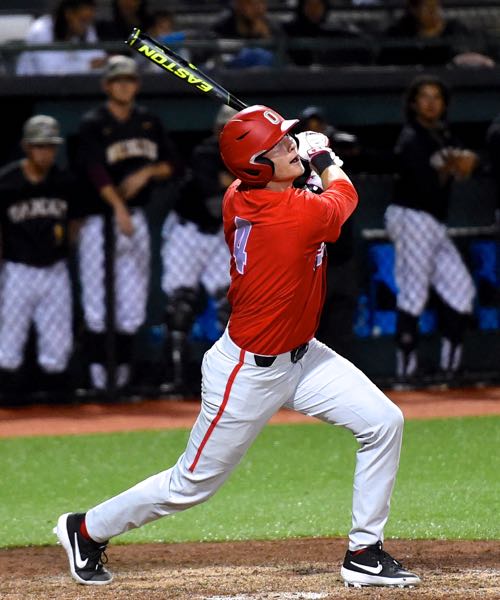 Zach Dezenzo’s single to center drove in a pair of Buckeye runs in the ninth.

Ohio State has not been no-hit since Mike Hedman of Purdue did it on April 15, 1995.

Things got interesting in the ninth when Buckeyes third baseman Zach Dezenzo muscled a 2-and-2 pitch to right-center to drive in two runs and put the tying run on base.

“He was able to get ahead with some off-speed stuff,’’ Dezenzo said. “I laid off the first pitch thinking it was a little low. I just wanted to make contact and hit something up the middle. I was just trying to get the next man up.’’

Dezenzo is batting .200, but has driven in seven runs for second on the team to Dominic Canzone’s eight.

“That number itself shows I’m producing for the team,’’ Dezenzo said. “I’m trying to be consistent. I am trying to hit the ball hard and give us some quality at bats.’’

The dugout came alive after the hit, but reliever Brandon Wilkes got designated hitter Nate Romans on a soft infield fly to second to end the game.

Beals wants to see many more at bats like Dezenzo’s final one.

“That’s what my message to our guys was – we need to play with more toughness in the middle of the game,’’ he said. “We need to compete harder. We need to fight to get guys on base. We have to have the belief where if we string three hits together like the seventh inning and get a run.’’

How good was Lonsway? He nearly matched Maldonado pitch for pitch in striking out 11, walking three and giving up five hits in 4 1/3 innings.

He was taken out for Will Pfenning after throwing 93 pitches.

The last Buckeye to strike out 11 batters in a game was No. 1 draft pick and future major leaguer Alex Wimmers on May 21, 2010 against Minnesota.

It wasn’t as if the Wildcats (4-4) smacked him around. They scored two runs with two out in the second inning on a bases-loaded single by Zach Spivey that Dezenzo knocked down with a lunge to his left at third. Shortstop Noah West kept the ball in the infield by grabbing the carom.

With one out, Lonsway walked Over Torres and gave up a single to left to Joseph Fernando. They advanced on a passed ball. After a strikeout, Josten Heron walked to load the bases.

The lead runners scored on the hit that Spivey barely was able to fight off.

“It was one inning, the second inning, when I gave up two runs,’’ Lonsway said. “I’ve got to avoid those walks and get ahead of batters. There was some good stuff in there, and we’ll go back and look at it tomorrow. There is room for improvement and we’ll go to work on it right away. I’d set myself up for success when I got a strike on batters. That helped me set the batters up.’’ 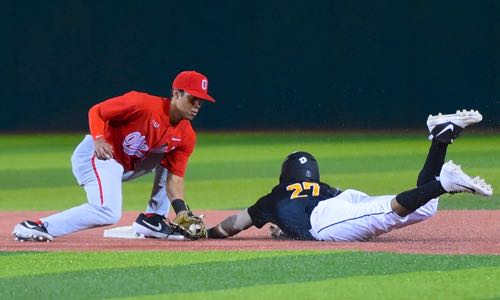 Noah West tags out a Bethune-Cookman runner in Friday’s loss in Daytona.

The third run off Lonsway scored when Nate Sterijevski led off the fifth with a single to center, stole second and scored when Pfennig gave up a single to left to Brandon Wilkes.

Lonsway is a redshirt freshman, but the No. 1 starter on a team that is loaded with lively young arms. He was stunning in his collegiate debut in striking out nine in six innings in a 4-3 victory over Seton Hall in the season opener at Port Charlotte, Fla.

Start No. 2 was the opposite. He lasted just 2 1/3 innings, walked four and gave up four hits in a 5-1 loss to Brigham Young last Friday at Corpus Christi, Texas.

“It takes some adjustments,’’ Lonsway said of making the jump from high school. “The speed of the game is higher. You have to find ways to improve yourself in every aspect. I’m going to get used to this in time.’’

What was the difference in start No. 3?

“I just have more confidence in myself,’’ he said. “I didn’t think about what I was doing. I stuck true to my roots and trusted myself and threw the ball the way I know how to.’’

It didn’t hurt that Lonsway felt he had to match Maldonaldo pitch for pitch to give his teammates a chance to catch up.

“He was bringing on some juice and had energy going his way and that drove me to be better on the mound and put us in contention to win the game,’’ Lonsway said.

Those not familiar with the story behind the stadium’s name might guess that Bethune-Cookman, a traditionally black university, honored Robinson for becoming the first African-American to play major league baseball.

But the stadium, which was built in 1914, is municipally owned and has been the home of minor league teams affiliated with St. Louis, Brooklyn, Baltimore and Montreal since the ‘20s. 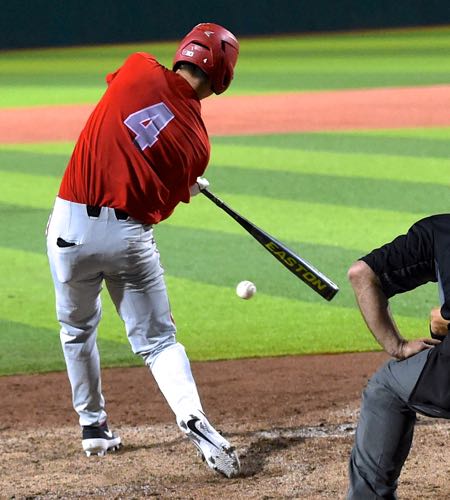 No one, though, calls it that. It’s often affectionately referred to as “The Jack.’’

When the Brooklyn Dodgers signed Robinson out of the Negro Leagues in 1946, he was assigned to the Montreal Royals during spring training.

Robinson was scheduled to play for the Royals in Sanford and Jacksonville, but was turned away because of segregation laws.

The Dodgers asked Daytona Beach if it could host an exhibition game against the Royals, and the color barrier was broken on March 17.

Robinson went on to a hall of fame career that saw him become National League rookie of the year in 1947, play in six World Series and win a championship in 1955 for Brooklyn.

The original grandstand in the 4,200-seat park has wooden planks for walkways. The entrance has a gate made of iron that has old school written all over it. To the right is a statue of Robinson in uniform talking to two children.

This season, though, the old girl got a major upgrade when artificial turf was put down. The only dirt portions are the mound and batter’s box.

The home dugout is as large as both at Bill Davis Stadium in Columbus. The visiting team, though, has half the room, and that makes the players look as if they are in a subway car at rush hour in New York City.

Bethune-Cookman and the Class A Tortugas have been playing in the stadium since 1993. 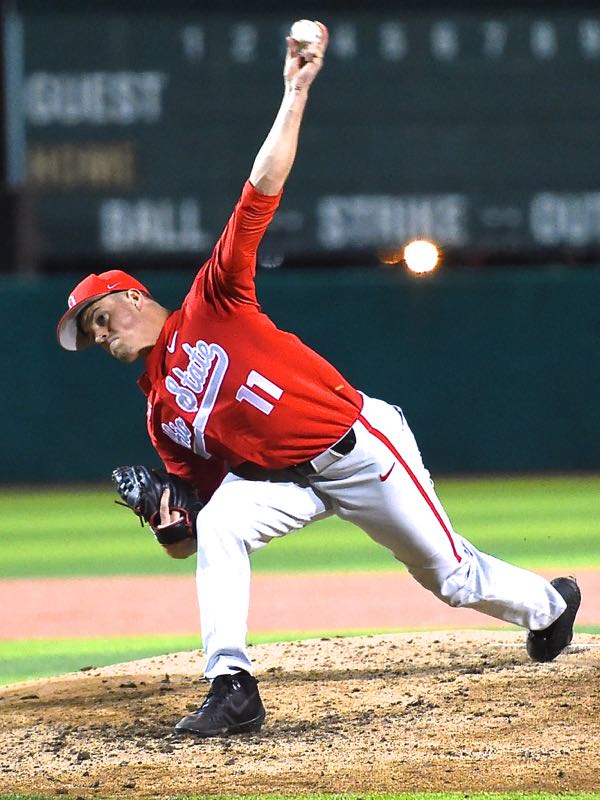 Seth Lonsway was lights out as the Buckeyes' starter, striking out eleven hitters in his 4.1 innings of work. (Press Pros Feature Photos by Julie McMaken Wright)