The Flyers fiddled as the Rams caught fire, and it cost them an embarrassing home overtime loss that should have never gotten to that point.  The Ides of March, indeed!

DAYTON — Fatts Russell, as skinny as a No. 2 pencil, was the poster player for what the University of Rhode Island wanted to erase from its memory.

A little more than three weeks ago, the University of Dayton barged into Rhode Island’s Ryan Center and hung a 29-point beatdown on the Rams, 77-48.

So Rhode Island walked into the University of Dayton Arena Friday night with a chip on each player’s shoulder, none bigger than the one worn by Fatts Russell.

And Russell and the Rams more than extracted their pound of flesh from the flat Flyers, 72-70, in overtime.

Russell whipped in 23 points on 9 of 20 shooting — four for nine from three — as the downtrodden Rams hung a large shiner on UD’s aspirations to finish in the Atlantic 10 top four, which would earn the Flyers a double bye in the league tournament.

Rhode Island is 7-and-9 in the A10, winning this one after losing seven of its last nine games. Dayton dropped to 11-and-5 in league play, losing after it had won 7 of its previous nine.

Basically, the game was two-on-two, Rhode Island’s Russell and Cyril Langevine (23 and 26 points) against UD’s Obi Toppin and Ryan Mikesell (26 and 23). 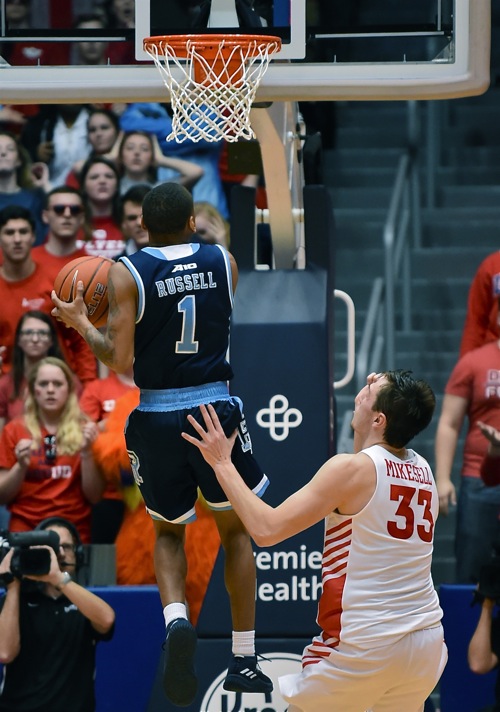 Problem for the Flyers…scoreless in their first meeting, Dayton couldn’t keep Fatts Russell away from the rim.

Finally, and steadily, they chipped away and tied it for the first time in the second half, 63-63, with 23 seconds left.

Jalen Crutcher missed a last-ditch shot and Trey Landers missed a tip at the buzzer to require a five-minute overtime.

Obi Toppin completed an old-fashioned basket-and-one three-point play with 2:51 left to give the Flyers a 70-68 lead.

They would not score again. Fatts Russell tied it on a drive to the basket, the Flyers turned it over and Dana Tate snagged an offensive rebound and dropped it in for a 72-70 Rhode Island lead with 1:16 left.

In those final 76 seconds, with the Arena fandom shatter ear drums, Obi Toppin lost the ball under the basket, Jordan Davis missed a three-pointer at 0:26, Jalen Crutcher missed a drive into the paint at 0:07, Trey Landers missed a jump shot at 0:04. 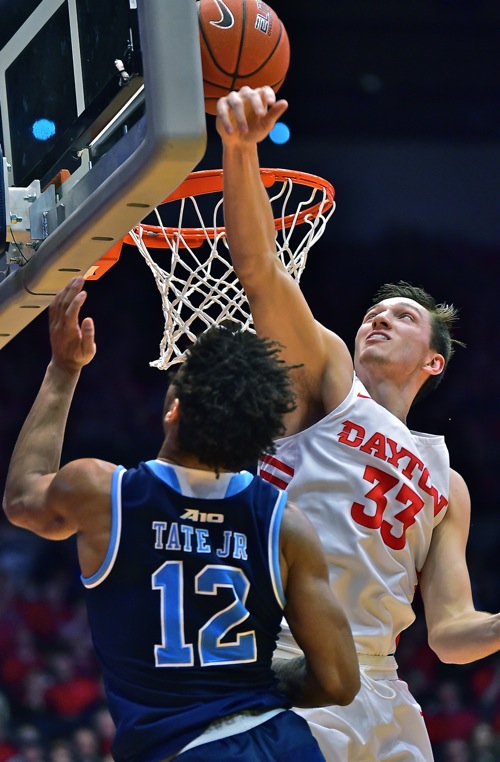 There was defense, too…Ryan Mikesell slaps away the shot off attempt of the Rams’ Dana Tate.

Of his game, which is as well-rounded as a Mercedes steering wheel, Mikesell said, “I’m willing to do whatever it takes, whether it is fighting Langevine for a rebound, taking charges, whatever it is, I’ll do it. And I want to tell you, Langevine is a beast.”

Mikesell said he and the Flyers knew Rhode Island would come with resolve and revenge on its agenda after what the Flyers did to the Rams.

“We were flat in the first half, you could definitely tell,” he said. “On the offensive end we didn’t play with a very good pace and defensively we were not on the same page. They got some good looks for threes and Fatts played really well.”

“You could tell Fatts had a little extra swagger about him after not scoring against us the first time,” said Mikesell. “He wanted to prove something to us and a credit to him, he did well.

“It’s frustrating because UD Arena was rocking and the fans are so passionate and then we laid an egg in the first half. It sucks, to say the least. We definitely let that one get away. We had a chance to control our own destiny with the double bye.”

Coach Anthony Grant minced no words about this team’s downfall and, in fact, pretty much made mince meat out of them. 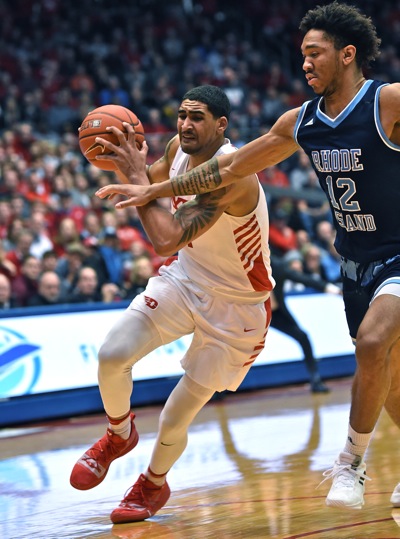 “I’m disappointed with our performance and we needed to be better,” he said. “We knew after what we did to them they’d come back with some fight and some toughness because it is a team that has competed for championships the last couple of years.

“We didn’t handle the situation either mentally or physically,” he said. “That’s my fault as a coach for not getting them prepared. We didn’t have the focus and the results showed that.”

The Flyers have two games remaining, a home game Wednesday against LaSalle and a road game in Pittsburgh Saturday against Duquesne.

Had the Flyers beaten Rhode Island and won out they would have solidified the double bye. Now, even if they win the final two, they may need some help from another team.

“We have to get past this one and it stings, especially at home,” said Grant. “You have to take care of business at home and we’ve struggled with that (losing to Virginia Commonwealth after coming from 22 points behind in the second half). 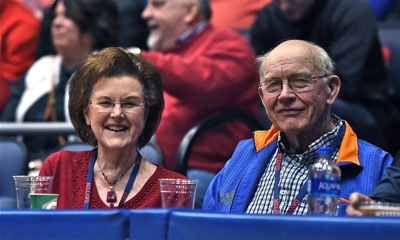 The homecoming…James Siefring (right, of St.Henry) graduated from UD in 1963, and made his first trip back to campus in 56 years Friday, with bride Adelma, to watch the Flyers.

“Good teams are at their best when good play is required,” he added. “It is critical for us to go into the tournament with a double bye. You always want to control your own destiny. We had the opportunity to do that tonight and we tried to stress the importance, not take it for granted. The sign of a mature team is that you position yourself to control your own destiny.”

So the Flyers need to beat a weak LaSalle team Wednesday night, then play a tough Duquesne team on its home court.

So what has gone easy for the Flyers this year? Nothing. Nothing at all. 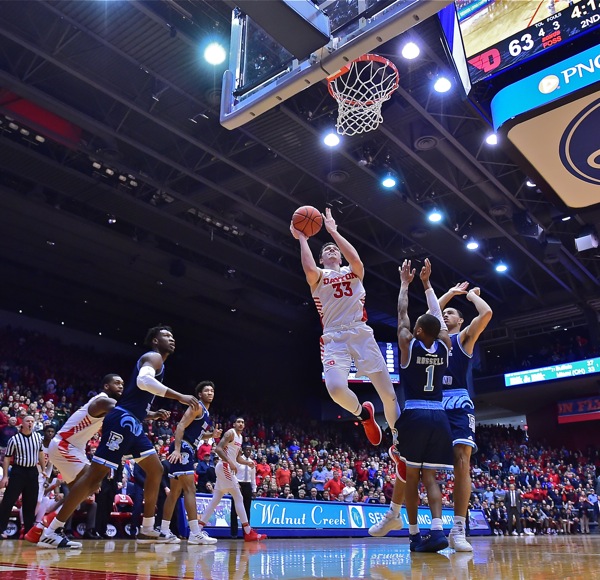 UD's Ryan Mikesell splits the Rhode Island defense for a late drive and two of his 23 points in overtime. (Press Pros Feature Photos by Sonny Fulks)