They didn’t play well, but the question is why?  The Buckeyes drop the finale in Corpus Christi and come home with a 1-3 weekend mark.  It makes for a long flight!

Corpus Christi – You can call it what you will, but the Buckeyes dropped the weekend finale here in Texas Monday afternoon…and they didn’t look particularly good doing it.

You could call it ‘getaway’ day if you want.  From a lifetime around the game I can tell you that it’s always a distraction to play on the day you have to pack and fly home – like you’re playing against the clock.  But on the other hand, they’re going home on a charter flight, with no clock, so, you know…..!

Or, you could call it simply the ‘ying’ and the ‘yang’ of baseball.  The game giveth, and some days it taketh away.  Monday seemed one of the latter because there’s no doubt…they got pitched to by an impressive trio of Texas A&M Corpus Christi arms.  For the day the Buckeyes had just two hits…and struck out 12 times!

Or, you could give consideration to what Greg Beals said in his abbreviated post-game remarks.

“The game today illustrated the difference in this weekend and last,”  he opened with.  “I’ll go back to how cleanly we played last weekend.  We threw strikes and we played defense.  We didn’t allow very many free bases.  It was minimal.  This weekend it was large.  That was the glaring difference to me regarding today, and for the entire weekend.  That’s what made me happy last weekend, and that’s what frustrates me the most about this weekend – the lack of clean baseball.”

To his point, the Buckeyes committed only one error for the game, but consider that the pitching trio of Jake Vance (4 ), Will Pfennig (1 ) and Bayden Root (2 ) issued a total of seven free bases via bases on ball…while giving up just 5 base hits.

“We walked 7, we hit 3 guys, and we commited an error on a pickoff play,”  added Beals.  “That certainly fueled what they were able to do offensively.  On the flip side, we only had two hits.  And on top of that we didn’t hit the ball hard much, either.  So we go back home tonight and go back to work.  We’ve seen a good weekend now, and we’ve seen a bad weekend, so we need to go back home and work on some things individually, and collectively.” 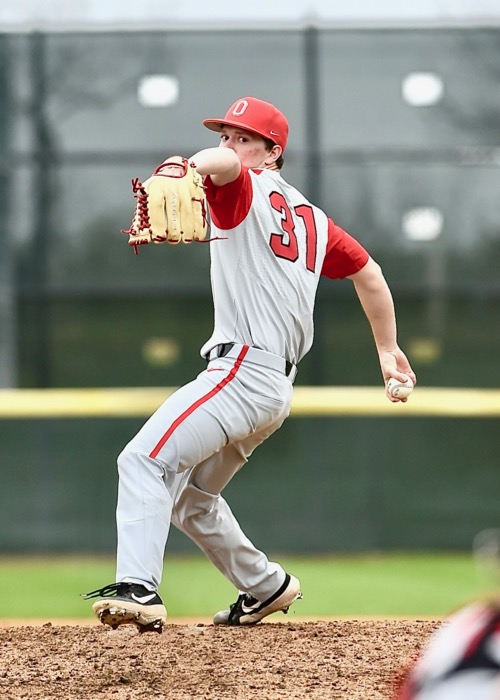 There were no highlights to speak of, save a couple.

One, their first hit came in the top of the fifth inning on freshman third baseman Zach Dezenzo’s first collegiate home run – a laser shot line drive that cleared the 384 mark in left center.  That stood as the game’s only run until the eighth.

Two, freshman Will Pfenning relieved starter Jake Vance after four innings and 68 pitches…and pitched the 5th, 6th, and 7th innings in efficient manner, giving up no runs on just 3 hits.  He struck one and walked one.

And they held that 1-0 margin until the bottom of the eight when another freshman, Bayden Root, came on hoping to reprise his successful debut of last weekend against Florida Gulf Coast.  He came in to protect that one run lead.  In brief, he could not.

It went this way.  A leadoff triple, a couple of walks, a couple of wild pitches, a sac fly, another base hit and before you knew it the 1-0 lead has dissolved into a 3-1 deficit.

In the top of the ninth the Buckeyes did add a run on a walk to Noah West, who advanced to third base on a wild pitch and a Dom Canzone ground out…then scored on a Brady Cherry infield single, the Buckeyes’ only other hit of the game.  With Cherry standing on first base Conner Pohl grounded into a fielder’s choice to end the ballgame.

Final lines:  Ohio State lost it with 2 runs on 2 hits, committed an error and left 4 men base.  Corpus Christi won it with 3 runs on 5 hits, played error-free baseball and left 11 men on base.  Bayden Root took the loss and now stands 0-1 for the season as the Buckeyes’ record slips to 5 wins and 3 losses.  It took 2 hrs and 30 minutes on an overcast day in south Texas.

As a commentary, it was a tough weekend of baseball, the sure sign of a ballclub that has 15 freshmen and sophomores on it.  Greg Beals’ parting words before heading to the team’s charter flight back to Columbus was…consistency.

And hopefully the 12 strikeouts were not a harbinger of past days and all those empty at bats.  Some credit has to go to Corpus Christi pitching, that threw hard, and pitched aggressively.

But for the sake of the glass at least having some water in it Monday…Zach Dezenzo’s home run was a highlight, as was Pfennig’s three innings of consistency.  For the two weekends, the Mason freshman has appeared three times, pitched 8.1 innings, given up 9 hits, but has yet to allow an earned run while striking out 4 and walking one.

“Will is showing us dependability and we like to see that out of him,”  concluded Beals.  “As for Zach’s home run…a big moment for the rookie to get his first home run and he’s capable of that.  He’ll have more.  But on a day like today we can’t be relying on solo home runs.  We need to be better than that.  What scares me a bit is that yesterday with wind blowing in we knew we needed to do some things to produce runs – line drives and balls through the infield.  Today the wind was blowing out and I think we thought we were going to hit balls out of the ballpark.  We got out of our proper approach.”

Translation:  Consistency, and they go back to the blackboard tomorrow at Bill Davis Stadium.  They go back to laboratory next weekend when they travel to Daytona and a four-game set with Bethune-Cookman. 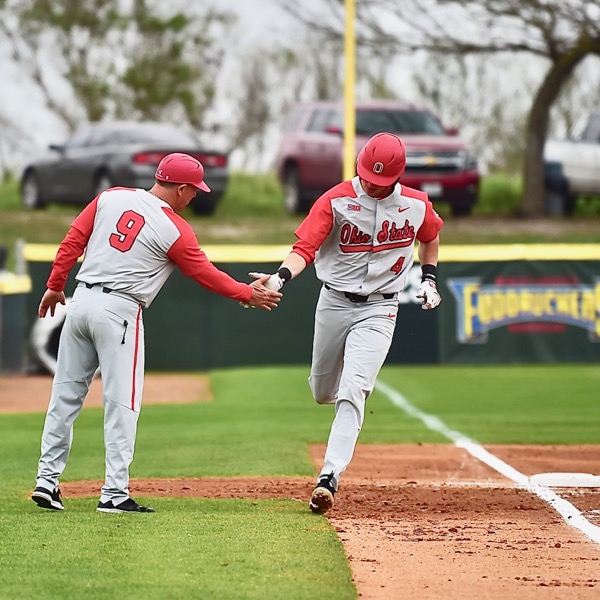 The offensive highlight was freshman Zach Dezenzo's solo home run in the fifth inning, his first as a Buckeye. (Press Pros Feature Photos)