The Grind Begins – Sidney Gets Past Carroll

Vandalia – There were several issues that hindered the Carroll Patriots upset bid against the Sidney Yellow Jackets Saturday night.

A) They didn’t shoot very well, especially in the second and fourth quarters.

B) They didn’t rebound well all night, despite having a size advantage over the state-ranked Yellow Jackets.

C) Andre Gordon plays for Sidney, not Carroll. Remember that one for a moment.

The Yellow Jackets had their hands full for about 28 minutes with the Patriots, who entered the game 12-10 following an overtime win over state-ranked Chaminade Julienne last week. Carroll allowed just 46.8 points per game, and was successful in taking away Sidney’s transition game for almost the entire night. 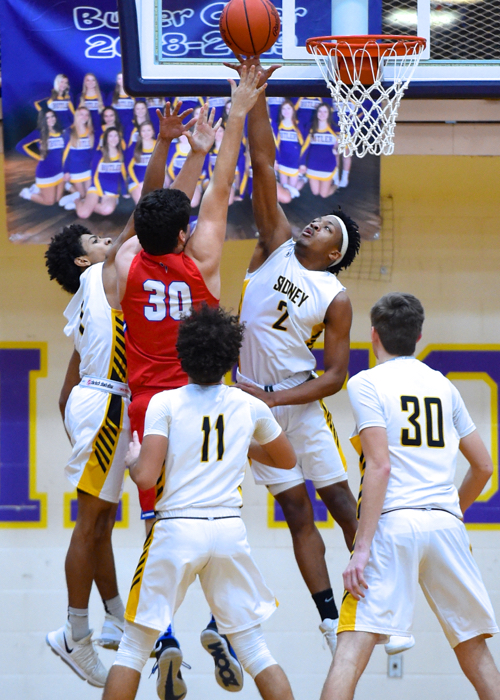 The Patriots found out why Ratez Roberts led the GWOC in blocked shots.

Now let’s go back to item C above.

Tied at 28 late in the third period after letting an 8 point halftime lead slip away, Sidney scored the final 4 points of the quarter for a 32-28 advantage. That’s when Gordon did what Gordon always seems to do. He took over.

The 6-2 senior scored 12 of his teams first 13 points in the fourth quarter, on his way to a 30 point night and leading the way to a rugged 48-35 win at the Student Activity Center. The win sets the 19-4 Jackets up against 11-12 Springboro, a 48-38 winner over Fairborn, Thursday night at 7:30 in the sectional semifinals.

“I have been saying all season that we play pretty good defense ourselves. Early on it didn’t look like it because we weren’t rebounding very well. But the second half of the season we have rebounded better and our defense has been really good.”

After an even first quarter that ended with the Jackets in front 11-10, Gavin Kinney hit a 3 to give the Patriots their second and last lead of the night. The rest of the quarter was a nightmare for Carroll  0 for 8 from the floor with four turnovers as Sidney scored the final 10 points of the half for a 21-13 lead at the break. 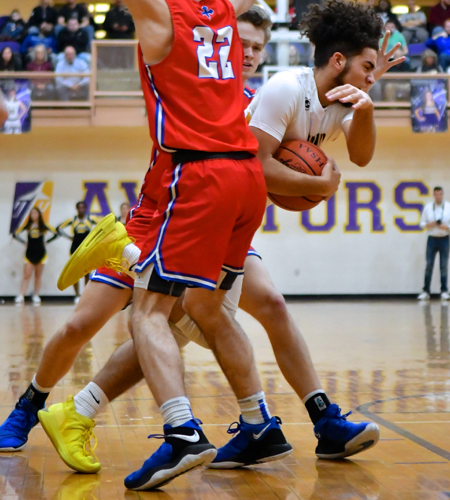 Keith Lee found the going tough against the Carroll defense.

Carroll looked like a different team in the third quarter. Matt Cogan, who spent most of the first half on the bench after a couple of early fouls, hit a pair of threes, and Simon Jefferson added a triple as Carroll outscored the Jackets 15-7 to get even at 28.

“We give up 13 points in the first half, then they come out and score on their first several possessions of the third quarter and you’re thinking ‘what changed at halftime,” Willoughby said with smile. “But we called a time-out and got re-focused on defense at that point , and played a lot better from that point on.”

Sidney had just two transition baskets, both dunks by Gordon. The first snapped a 13-all tie in the second, and the second followed a steal that restored the Sidney lead to 6 early in the fourth period.

Sidney finished the game on a 13-3 run, capped off by an acrobatic play by Ratez Roberts. The 6-2 senior, who finished with 13 points, stole the ball at mid-court, got whacked in the head on his way to the rim, and still managed to score while falling away from the basket.

Gordon was everywhere on both ends of the floor. He scored 5 points in the first quarter, including a three on the first possession of the game, added 6 points in the second, 7 in the third before his big fourth quarter. The Virginia Tech recruit now needs 57 points to become the first Yellow Jacket to score 2,000 points in his career.

“They slowed us down a lot,” Gordon said of the Patriots. “They played good team defense, having someone sagging off on me. I think I had a couple of assists early, but it was close all the way so I had to step it up a bit.” 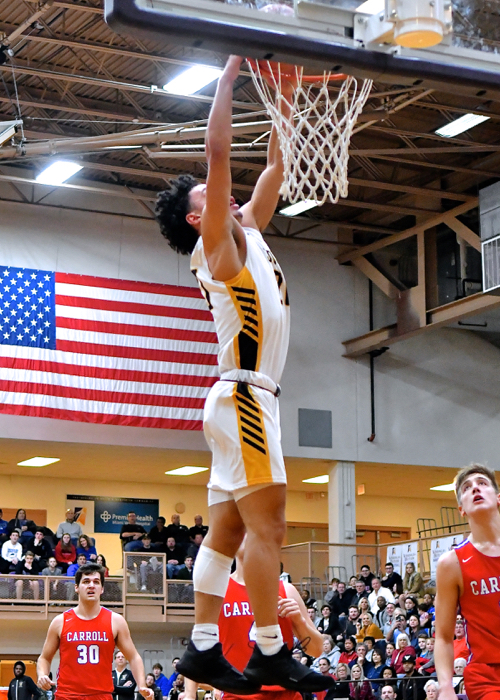 Andre Gordon drops in one of his two dunks for the night.

The Jackets finished the night 19 of 42 from the floor for 45%, just 2 of 9 from the arc, and 8 of 14 from the line for 57%. While that might sound like an alarming figure, it’s about what Sidney has shot all year from the line.

Sidney out-rebounded the taller Patriots 26-16, and did not allow an offensive rebound in the first half. The Patriots were also hampered by 14 turnovers to just 8 for the Jackets.

“Lathan Jones (6-3 junior) has really helped out the rebounding and the defense. He has come a long way for us. You know me, I am always preaching defense. When it’s tournament time or you are competing for league titles you have to play good defense. We talk about it all the time.”

“It’s tournament basketball,” continued Gordon. “We knew they were a good team and that they beat C-J their last game. We thought it would be a game of runs and whoever came to play would win. 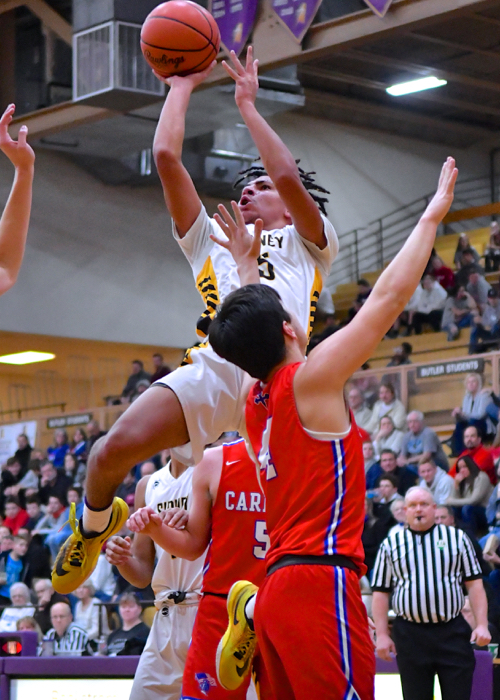 Darren Taborn flies over the Patriot defense to score.

“We know what’s at stake. It’s win or go home. It’s my senior year, we have several seniors on the team and we know that if we lose there is no more high school basketball. That is our mindset.”

“They say you play the way you practice,’’ Willoughby said. “In the three years I have been at Sidney, we have not had three straight days of practice as good as we had for this game, Andre included. I think they get it. For the seniors, this is their last shot. Now is the time they have to do it. I thought we played real well tonight.

“We can play this type of game. At the beginning of the season, we weren’t good at closing out games with lead, but this tempo doesn’t bother us. We can play any style. We don’t panic and we don’t lose control of what we do. Then when you have Andre running things…these type of games don’t worry us.

Springboro has 6-7 and 6-8 players in the starting lineup, and that gave Willoughby pause.

“I didn’t know they were that big. That is something we are going to have to figure out tomorrow and Monday. I think it just becomes down to effort and execution.

“I think we can still get the ball to the basket. We just have to concentrate and not worry about their size. Andre can compete at that level, Ratez can. We don’t want to back away from what we are good at because they are a little taller than us. We still want to get the ball inside on the dribble-drive and things like that.” 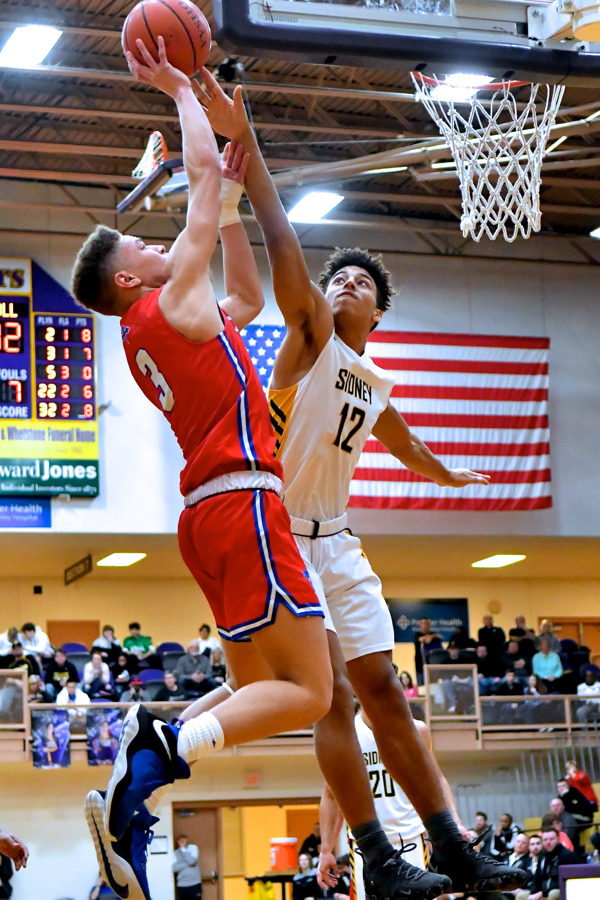 Sidney’s Lathan Jones challenges a Carroll shooter in the second half. 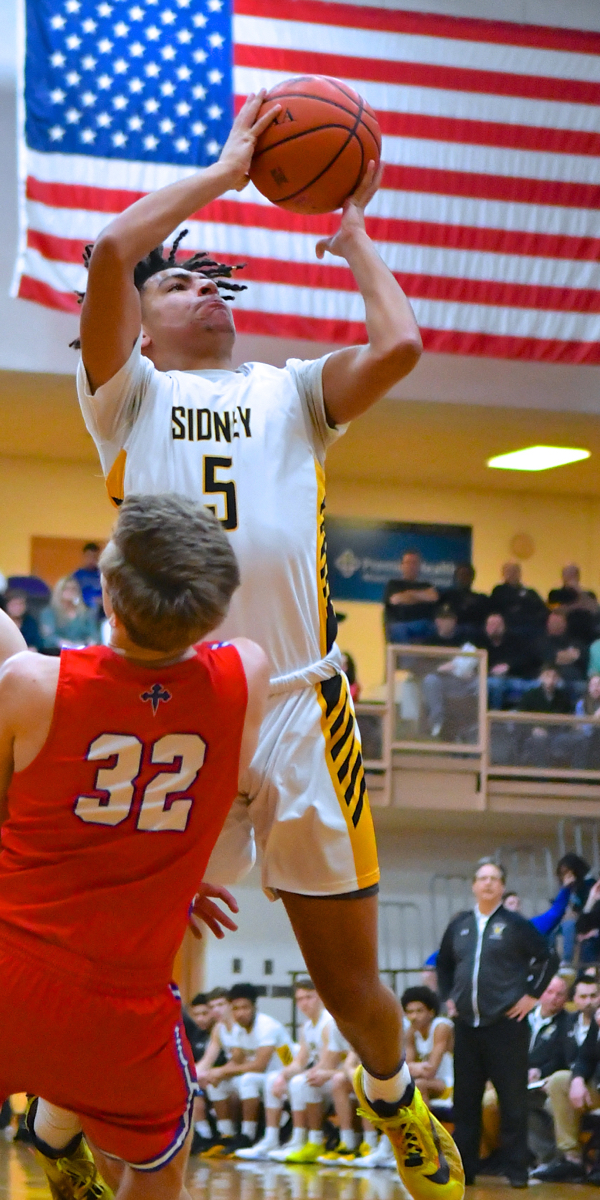