What a difference a day makes…the Buckeyes get contributions up and down the lineup and strong pitching to beat Oral Roberts, 8-3.

Corpus Christi, TX – This was better.  Much, much better.

They won it with 8 runs on 10 hits, committed a couple of innocuous errors, and left 6 men on base.

ORU lost with 3 runs on just 5 hits, likewise with 2 errors, and left 7 on base compliments to three Buckeye pitchers – starter Griffan Smith, and relievers T.J. Brock and Mitch Milheim.

It was better…because in the wake of last night’s disaster they adjusted to the roles necessary to win a baseball game, despite a setback like Saturday’s.

They got a strong starting performance from Smith.

They got big hits, and timely hits, up and down the lineup, highlighted by Dom Canzone’s big three-run blast in the fifth inning, his third of the year.

They got some people off the ‘schneid’…like first baseman Conner Pohl, who after going 0-for-Texas broke through with a couple of line drive hits and a 2 for 5 day on Sunday.

And, they got an efficient closing effort from freshman reliever Mitch Milheim, who came on in the eighth and threw nothing but strikes…and outs.  6 up, and 6 down.

“I think the post-game message after yesterday was about the resolve of this ballclub,”  said Greg Beals.  “You have the tough loss last night, you have a quick turnaround, and our guys were in here early today to take hitting and they were ready to go.  I was concerned, obviously, after last night, but they answered the bell. 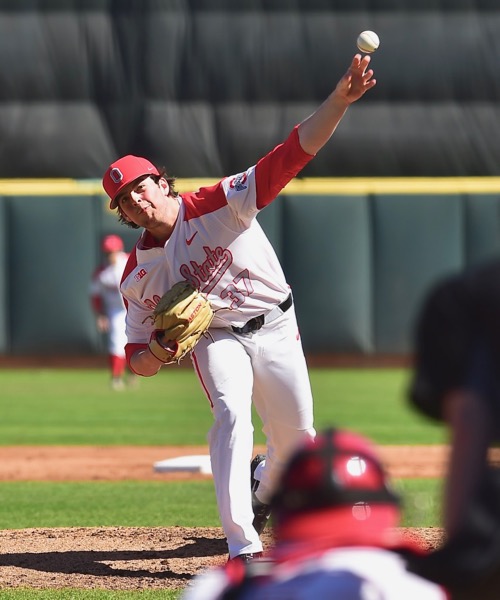 “We talk all the time about next pitch, and staying in the moment, and today the guys responded really well.”

No one responded better than Griffan Smith, who gained his second win of the early season with five innings of 3-hit baseball, striking out 5 and walking 3.

“We did what we needed to do,”  added Beals.  “This is a good ballclub;  and I like this ballclub.  We just have to stay in the mode of everyone just being ‘me’, and ‘me’ being good on a daily basis.  That’s what we did today.  We filled the roles – Noah West at the top of the order, Dom’s big hit to bust things open, Conner Pohl gets a couple of knocks today and maybe he rolls now with that.  But Griffan set the tempo on the mound, as you always want.  He gave us the quality start to get us going.”

They scored single runs in each of the first two innings, and held that slim margin until the fifth.  With Malik Jones and Marcus Ernst on base, Dom Canzone picked on a high fastball from ORU starter Isaac Coffey and drove it into the teeth of a brisk breeze and out over the right field pavilion at Whataburger Park.  Canzone, who’s struggled noticeably of late, welcomed the change of fortune. 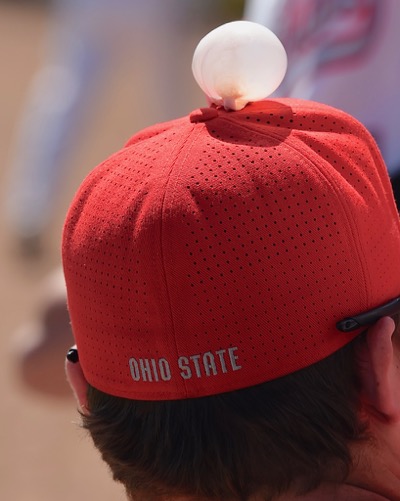 Bubble head…Teammates caught Dillon Dingler off guard Sunday and crowned his absence from the lineup. Dingler is out with a broken bone in his left hand.

“I’m just trying to trust the process,”  he said post-game.  “You try to believe in yourself because we do have some other guys like Cherry and Todys who are picking us up.  Last night was really tough, but today we came back out and tried to compete…just give it our best.”

Conner Pohl’s pair of base hits – line drives – in five at bats were a a result of work in the cage before the game.

“I’ve just been struggling with my time,”  said the Arcanum junior.  “We got in the cage this morning and worked on a couple of things, and my timing at the plate was a lot better today.  I just tried to stay up the middle.”

Ironically, the one guy who didn’t get a hit Sunday was the one who’s been the most consistent through the team’s first seven games.  Still, Brady Cherry drove two balls to the fence in left and center on Sunday – outs, but LOUD outs!  He’s hitting a team-leading .400 with 3 homers and 5 RBIs.

“I’m just trying to stay relaxed,”  he said with a grin.  “I’m not worrying about anything and just trying to get the barrel on the ball.  And, I’m having a good time playing left field.  It’s a good change of pace for me and I’m having fun with it.”

The hitting stars were again some familiar names, albeit welcome contributions from Canzone and Conner Pohl.  Noah West continues to hit, now from the leadoff position, and had another 2 hits in 5 at bats.  West is hitting at a .375 clip.  Pohl went 2 for 4.  And Brent Todys, God love him, had another 2 hits in 3 at bats filling in for Dillon Dingler and raised his average to .346.

The bullpen was again sound – freshman T.J. Brock throwing the sixth and seventh innings, giving up a pair of runs on two hits.  And Mitch Milheim, as noted, recorded the final 6 outs on 19 pitches while picking off a wicked head-high line drive hit back at him in the eighth.  Nothing to it!

The team concludes weekend #2 tomorrow, seeking a weekend split, with an afternoon affair at Texas A&M Corpus Christi, on campus.  Junior Jake Vance will get that start, seeking his second win in as many outings. 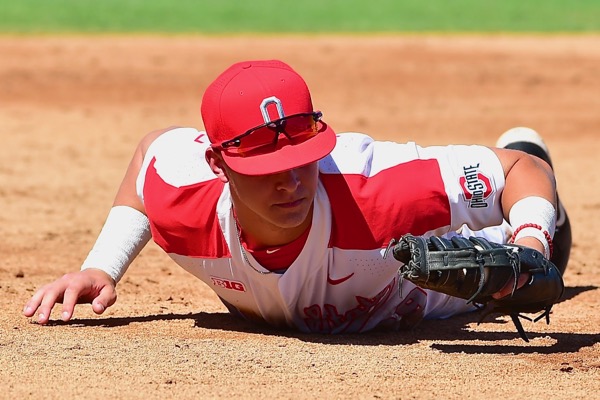 First baseman Conner Pohl checks his glove after snaring a line drive out in the third inning of Sunday’s win over Oral Roberts. 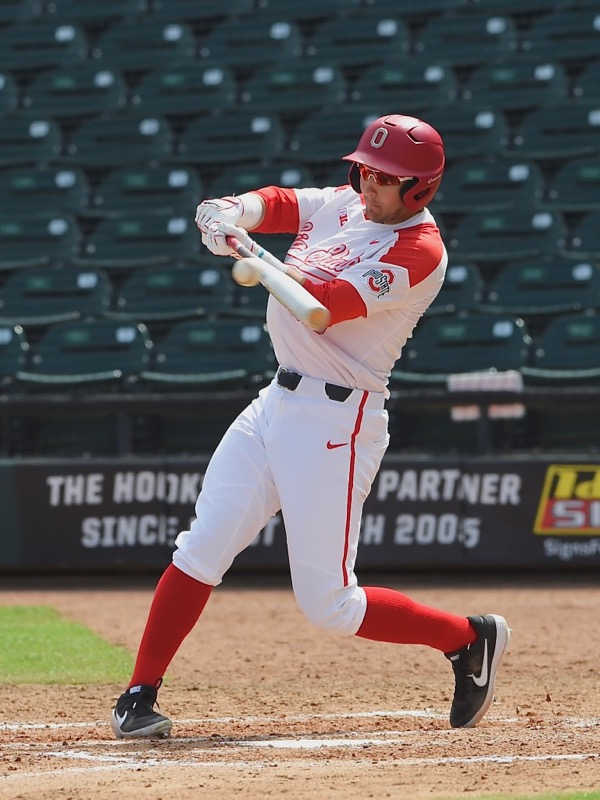