They’re not invincible after all, but as it turned out eight good innings of baseball wasn’t enough to overcome one bad one.  Buckeyes suffer their first loss…to BYU.

Corpus Christi, TX – Look, no one really believed that they’d go 56-0.  This is baseball, after all, where even really good hitters come up empty seven times out of ten.

But the manner in which the Buckeyes suffered their first defeat of 2019 Friday afternoon was decidedly out of character with what we’d come to expect after their impressive 4-0 start.  The fact is, when you play that well it’s easy to forget the statistical reality of the game.

They dropped Friday’s opener of the Kleberg Bank Classic to Brigham Young University, 5-1, and all five runs, on five hits, came in the bottom of the third inning off Buckeye starter, Seth Lonsway.

How?  After a strong first inning, walks started his problems in the third as the sophomore from Celina simply couldn’t find home plate, a pattern that had him in hot water in the second inning, as well.  But whereas he was able to punch his way through in the second, he couldn’t in the third.  The harder he tried, the more the plate evaded him.  And when he tried to compensate by taking a bit off…the BYU hitters took full advantage.

“He didn’t have a quality start,”  said Greg Beals, acknowledging the obvious.  “That third inning got away from us, and the four walks were a part of it.  I think he was feeling for the plate in the third, instead of attacking the zone, and that led them into a couple of hits after the walks.  It wasn’t a good outing like we saw from Seth last weekend.

“But obviously we’re not going to win ’em all,”  Beals added.  “Everything went pretty clean for us last weekend, so today might be good for us.  It’s a reality check that it CAN happen, and we’ve got to come back tomorrow and play better baseball.  We didn’t get the quality start that we would have liked, but we’ve got to have better at bats than we had.  We didn’t do anything offensively, and to me that was the real story of the game.” 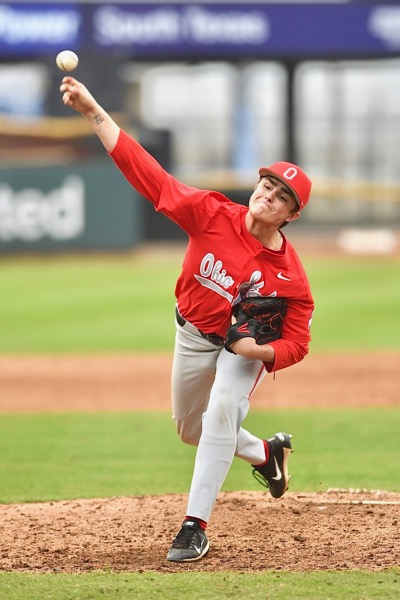 T.J. Brock (Cincinnati Country Day) was one of three freshmen out of the ‘pen to pitch 6.2 innings of scoreless baseball.

The story for the Cougars was the quality start they received from righthander Jordan Wood.  Wood went the first six, gave up 1 run on 3 hits, struck out 5 and walked 1.  Reliever Easton Walker was similarly as good, pitching the final three innings and giving up no runs on no hits, while striking out 2 and walking 1.

The Buckeyes lone run came in the top of the sixth on a double by Malik Jones and a sac fly by Kobie Foppe.  Other than that…the one bright spot to write about was the work of the bullpen.

Freshman Will Pfennig came on with one out in the bottom of their third inning, gave up one inherited runner on a base hit that scored the fifth of BYU’s five runs in the inning…then slammed the door for the next 3.2 innings – no runs on 4 hits, with 3 strikeouts and no walks.  It was a highlight on an otherwise, overcast and foggy afternoon.

“Will came in and did a good job,”  added Beals.  “We have a lot of confidence in him and he’s going to have a great career here for us.  He gave us a chance [today].  He threw strikes and put up some zeros.  Then we went with Milheim (1.2 innings, no runs), and Brock (one inning, no runs on 2 hits) to finish things out and they gave us a chance.  We just didn’t get enough from our offense today.”

While there wasn’t much offense to write about, the defense behind the young pitching continues to be good.  Both errors in Friday’s loss were throwing errors by freshman pitcher Will Pfennig (on pickoff attempts) in the fifth and sixth innings respectively.  Pfennig and Milheim rolled a couple of double plays to help them out of innings.

Friday’s three hits were the doubles by Jones and Todys in the sixth, and a single in the second inning by designated hitter Nate Romans.  Romans now has four hits in his last two games, going back to last Monday’s 2-0 win over Florida Gulf Coast.

Catcher and co-captain Dillon Dingler was sporting a cast on his left hand from surgery earlier in the week on a broken hamate bone in his left hand.  “I did it swinging the bat in the opening game against Seton Hall,”  said Dingler.  “My hand just went numb and I knew something was wrong.”  Typically that injury requires four to six weeks to heal, depending on the individual and your tolerance to pain by playing through it.

“I can take the pain,” smiled Dingler.

The Buckeyes are back at it tomorrow evening with a 6 pm game against Texas A&M (Corpus Christi).  Freshman Garrett Burhenn will seek to follow up his impressive debut last weekend and get the club back on the winning track. 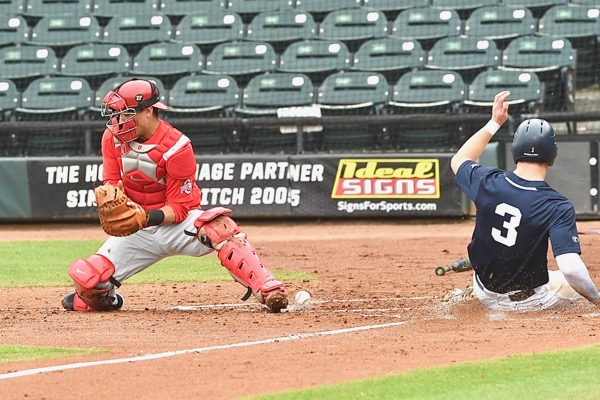 Catcher Brent Todys could not come up with the baseball to tag one of five BYU runners that scored in the third. 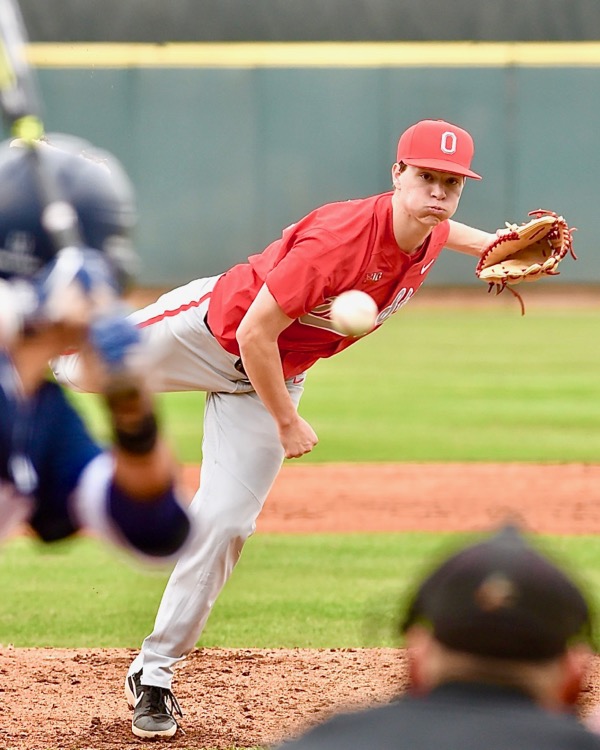