It was just the elixir they needed with tough games coming against Iowa and Maryland…the Buckeyes cruise in a blowout win over Northwestern…Kaleb Wesson returns to form with 22 points.

Columbus – It was the final minute of the ballgame and the only suspense remaining, especially for the “Nut House’’ student cheering section, was whether either of Ohio State’s walk-ons would get a basket against Northwestern.

For anyone who has watched the Buckeyes perform like a worn-out radial tire the last three weeks, it was a sight for them to see Joey Lane, the people’s choice, and Danny Hummer kneeling at mid-court waiting to get in.

Alas, Lane blew a lay-up, but it had been three weeks since Ohio State players finished a ballgame dribbling out the clock with smiles on their faces.

Keep in mind, the win came against an opponent that lost its seventh straight game and probably has supplanted Penn State as the Big Ten’s bottom feeder.

But this game was an elixir for an Ohio State team that had lost two straight games and faces a minefield coming up against Maryland, Iowa and Purdue.

“I feel really good about this win because I have a lot of respect for this Northwestern team and their ability to make you grind at the offensive end,’’ Ohio State coach Chris Holtmann said. “We had a little bit of an opening in the second half and I think that gave our guys some life. I’m pleased with our guys’ approach, really, from start to finish.’’

Senior guard Keyshawn Woods had three steals and Andre Wesson and his brother each had two.

“Listen, look at our defensive numbers,’’ Holtmann said. “We’ve had a lot of consistency. We are probably where we are at because of our team defense, honestly. That has kept us in games and given us a chance this season. Our defense has been pretty consistent. Tonight it was good. Northwestern runs such good stuff and they missed some shots they normally make, and we got lucky in some areas.’’

After a rocky first half, Kaleb Wesson (22 points) and the Buckeyes got it together in the second half.

The first half was so rocky for both teams that it looked like the 1930s with tight shorts and two-handed set shots. Ohio State did come on after missing eight of its first nine shots to finish 9-for-24. Northwestern was 7-for-24.

The Buckeyes got it together in the second half, but the Wildcats were 11-for-33 in never getting into any type of rhythm.

“We knew defensively that we were doing a pretty good job,’’ freshman guard Duane Washington said of the first half. “There were a couple of 50-50 balls we missed in the first half, but it was not making a couple of shots. We knew it was going to be a grind. Coach talked to us about it. We stayed positive in the locker room. We said we were going to continue to play good defense and put shots on the rim.’’

It didn’t take a math major to figure out that this was a must-win game.

“We just knew that we really needed this game,’’ Washington said. “We all bought into a good day of prep – we worked really hard yesterday – and knew we can be really good if we all lock in.’’

“Forty-nine (points) is not going to get it done,’’ he said. “I don’t think Chris (Holtmann) or I would say it was a beautiful game, but it was a hard-played game. They got a little rhythm in the second half that gave them some momentum. They got some back cuts. We’re going through a tough time lately. We’ve been struggling offensively. I thought their physicality on the perimeter bothered us. You have to credit their defense. The play good defense.’’

Sheward-Fulks is proud to sponsor coverage of Buckeye sports on staging.pressprosmagazine.com.

But it also was a resurgent offense – one that scored 44 points against Michigan State the last time out for the team’s lowest total since 2009 – which set the tone.

Sometimes it was Kaleb Wesson acting as something of a clearinghouse underneath the basket dishing the ball. Other times it was Woods, Luther Muhammad and Washington zipping smart bounce passes into the block.

Northwestern double-teamed the ball on the perimeter and that exposed its underbelly to sharp bounce passes, no-look passes and lobs to wide open players.

The Buckeyes had 18 assists for the highest total since they had 19 against High Point and 26 against UCLA way back in December.

“That’s something we always try to do – get our teammates open shots for team ball,’’ Kaleb Wesson said. “It was just how aggressive they were on defense. It was made for back cuts and open opportunities.’’

The share-alike mentality, he said, is something the coaches and players talk about all the time.

“Every successful team, that when you buy into your role, it’s going to make for a better team,’’ Wesson said. “When you step out outside your role and everybody wants to be the man, that’s when the team shuts down.’’

Holtmann said there were no major halftime adjustments.

“We ran a few different things in the second half from the first half, but really, that’s the players,’’ he said. “I just think they made better decisions with the ball. They could have forced it at times, but didn’t force it.’’

Finally, freshman swingman Justin Ahrens of Versailles might have made a breakthrough when it comes to receiving more playing time. 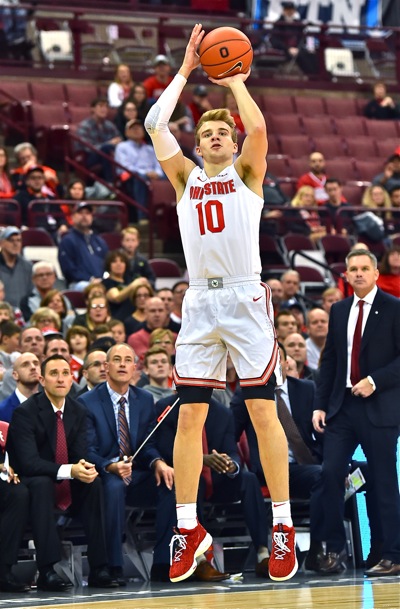 Freshman Justin Ahrens got the start in the second half and made a strong statement for more playing time.

Ahrens started the second half and played 7 minutes, 5 seconds. He hit a reverse lay-up and thundering dunk and had two rebounds and one assist.

Holtmann clarified that others on the bench also are committed.

It was expected to be a roller-coaster season with so many youngsters and only two players back from last season’s rotation, and Holtmann has been trying to keep his men positive. The media has picked apart the Buckeyes, and for good reason.

“As coaches and probably media members as well we like to pull out the negative things,’’ he said. “A guy once told me when I got into coaching that, ‘You know they don’t write about the planes that land.’’’

Despite all this uneven play and an inability to beat the Big Ten’s best, the Buckeyes are still very much in the hunt for a bid to the NCAA tournament. Ken Pom had them ranked 38th and the NCAA NET had them at 45th at the top of the week.