To good to be true?  Not for the moment, as sophomore starter Griffan Smith dazzled, freshman reliever Bayden Root rose to the occasion, junior closer Andrew Magno recorded the save…and senior Brady Cherry homered to make it academic.

Want more?  Senior left fielder Brady Cherry went 3 for 4, slugged his second home run of the season, and sent the Buckeyes to their 10:30 charter back to Columbus after the game with a four-game sweep of the weekend…and “Uncle Mo” (that’s ‘Mo’ for momentum) sitting in the front row of business class.

It’s apropos, really.  For an institution that prides itself on its academic excellence, the Ohio State Buckeyes baseball team has made its early habit of winning nearly as academic – pitch well, play sound defense, and get timely hitting.  Academic!

“I wouldn’t call it routine,”  cautioned Greg Beals.  “It’s awfully early yet.  But we are playing really good baseball.  We’re throwing a lot of strikes and the our pitchers are pitching to their stuff.  Griffan Smith gave us a quality start, Bayden Root came in and gave us everything he had, and Andrew Magno came on in the ninth to shut it down. 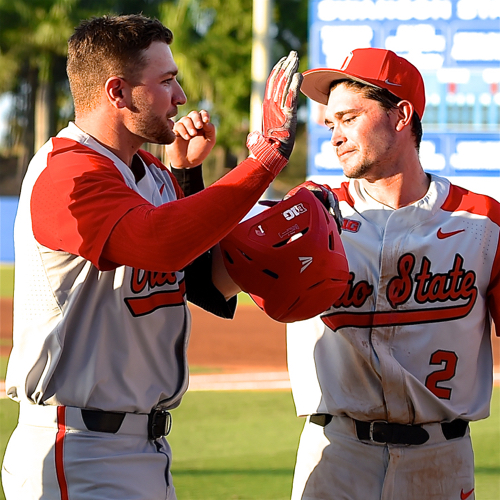 “But what I like most are those maturing innings that our young players are getting.  Griffan Smith, Bayden Root and Magno – tonight was big-time grow up innings for those guys.  Zach Dezenzo got to make a couple of plays on defense, and I’m really happy for Brady Cherry and Nate Romans because they both had big days today.  We’re getting contributions up and down the lineup and we were really good this weekend.  Now we need to build on that ‘momentum’ and continue to play high quality baseball.

Momentum!  Griffan Smith, making his first start of the year, came charging out of the bullpen with it and totally frustrated an aggressive FGCU lineup for the first five innings.  Smith was sharp, getting ahead in the count, throwing strikes when he wanted to…and not throwing strikes when he wanted to.  He dropped the breaking pitch in when it was least expected to get ahead, and then blew a surprisingly firm fastball past hitters for called third strikes when they took him for granted.  His line:  5 innings, 1 hit, 7 strikeouts, and no walks. 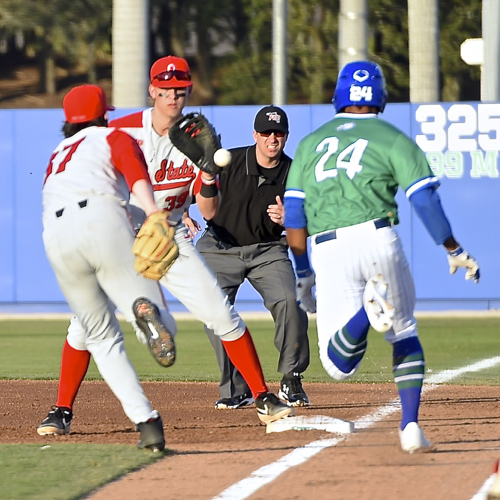 The Buckeyes continued to make all the plays in their Monday shutout over FGCU.

Smith was so good as get in the head of an FGCU team that obviously wanted a win over Ohio State University more  than everlasting life itself.  He no-hit them for the first four innings, and as the innings passed the frustration mounted.

To exacerbate all this, Smith finally did give up a hit in the fifth after he hit the leadoff batter in the shoulder with a fastball.  But with runners on first and second and no outs…he struck out the next two hitters swinging, and popped up the third out to center fielder Malik Jones.

“I just tried to take it one pitch at a time,”  he said afterwards.  “It was fun.  I had a lot of fun out there tonight – the most fun game I’ve ever been a part of.  It was a great feeling.  I just felt like I could throw whatever pitch I wanted, regardless of the count.  They were off balance and it’s a lot of fun when you can do that.  This was a great team win for us.”

As it turned out, Brady Cherry gave him all the support he needed in the top of the second inning when he led off with one of those towering home runs he hits with that natural uppercut swing – a ball that FGCU left fielder Cameron Krzemenski just turned and watched as it disappeared in the tree tops beyond the 375 mark in left center.

In the sixth they tacked on their other run.  With one out Cherry would single to left for his second hit of the game, Nate Romans walked, and Noah West drove in Cherry with a single to center to make it 2-0. 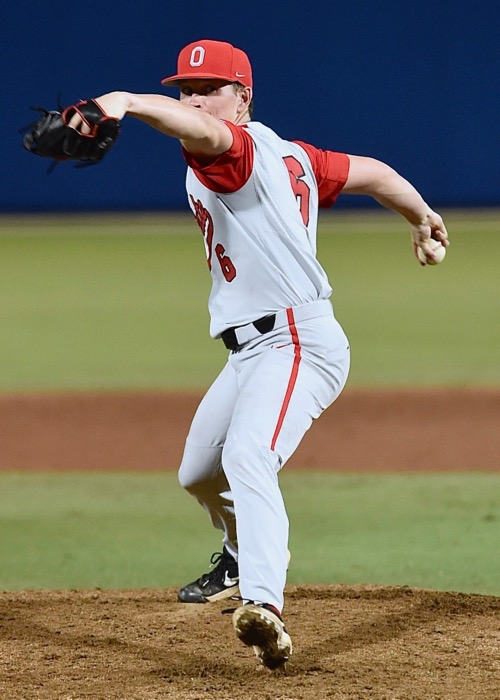 Freshman Bayden Root (Kokomo, Ind) came on in the sixth and dazzled in his first varsity appearance.

Enter Bayden Root…a 6’3″ freshman from Kokomo, Indiana who wears the charmed #6 and throws fastballs and sliders like Rodney Dangerfield threw one-liners.  With the pressure of a tight game on his shoulders he pitched the sixth, the seventh, and the eighth, retired nine of the eleven batters he faced, allowed 1 hit, struck out 5 and walked 1.  Of his 50 pitches thrown, 31 of them were for strikes.

“It really felt good,”  he acknowledged with a sheepish smile.  “I’m just so confident in the guys behind me.  I know they’re going to get the job done.  Those seven behind me and Todys behind the plate, they can absolute pick it and that makes my job so much easier.  It was so exciting for me to bring that game home tonight.”

Well, he brought it to the ninth, when Beals went to the bullpen to bring in Andrew Magno, one of the prime candidates for the closer position.

“I told him yesterday to be ready for tomorrow night,”  said Beals.  “Because he only threw to one hitter.” 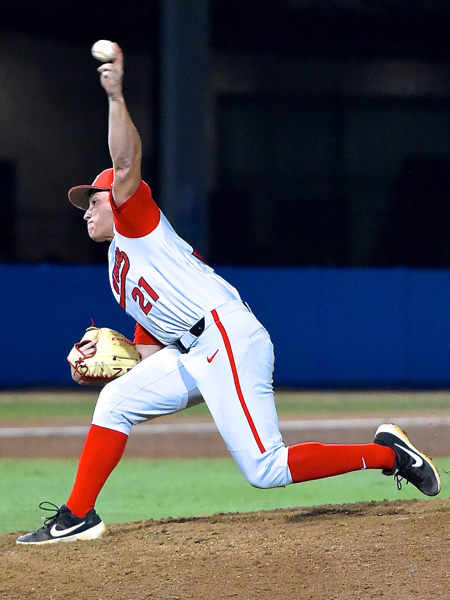 Andrew Magno shut things down in the ninth to earn his first save as a Buckeye.

Magno came in to a howling opposing dugout and proceeded to throw three warmup pitches past catcher Brent Todys and on to the screen.  And with each one of those pitches the volume went up.  But he shut the noise down just as quickly he popped up the leadoff hitter to right and struck out second baseman Richie Garcia for the second out.  The following hitter, Kole Gilmore, hit an infield single to Kobie Foppe behind second base.  Then, on a 3-2 pitch to the succeeding hitter, Magno walked him to put runners at second and third…and again with the noise out of the dugout.

“I never doubted myself,”  he said later, and he pitched like it.

He quickly got two strikes on the Eagles DG Joe Kinker, and popped him up to Malik Jones in center for the final out.  It was Magno’s turn to turn on the dugout…and he did.

“I heard them chirping over there,”  he smiled afterwards.  “I let them know, because I guess I’m known for letting my emotions show.  But that was fun.  That’s why you play the game.  That was a huge moment for me because you can’t come out after Kinker, and Yianni and Kyle Michalik and not be successful.  They paved the way for me and showed me what it was about.  I wanted to earn his (Beals) trust.” 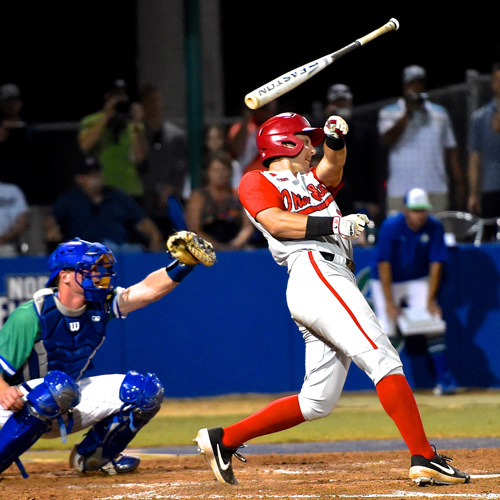 Schwetty hands…Dominic Canzone lets it fly in the seventh inning!

The Buckeyes won it with 2 runs, on 8 hits, no errors, and left 10 on base.  Griffan Smith was the winner, 1-0 for the season, as Magno earned his first career save.

Florida Gulf Coast lost it with no runs on just 3 hits, they committed 2 errors, and left 6 men on base.

Before leaving for the airport and their charter home, Greg Beals talked about what’s most important after a ‘pinch me’ weekend like this…where it would seem that every question beforehand had at least been answered in short form – pitching, defense, and that timely hitting we mentioned.

“This was big for our ballclub,”  said Beals.  “And big because you want to have the lead when you pitch like we’re pitching right now.  What the lead does to a pitching staff, I don’t know if you can measure that.  To have the lead and to have the support of the whole team…the energy around Ohio State baseball and within our own brotherhood is really strong right now.”

And energy enough, honestly, to get back to Columbus without a plane.  They way they’re going they could ride “Uncle Mo”… all the way home!

The hitting star was unquestionably Brady Cherry, who went 3 for 4 and added to his already 4 for 11 weekend against Seton Hall.  Now 7 for 15 on the season, Cherry raised his average for four games to .466! 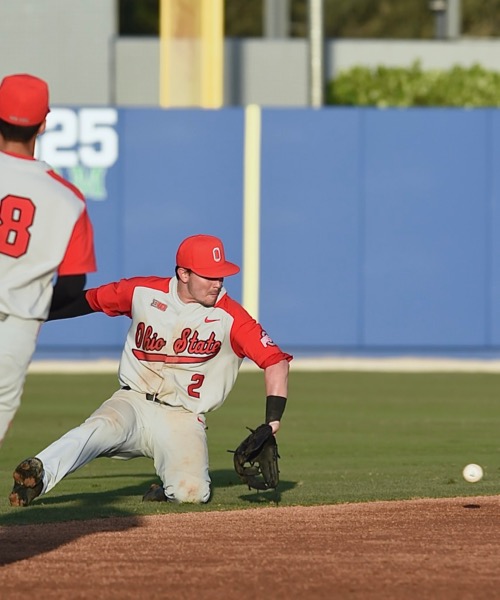 But don’t forget Nate Romans, who went 3 for 3 against FGCU, and walked once.  He was on base four times.  “Really big night for Nate,”  Beals added.  “Because, he had a slow first couple of days over the weekend and let him watch yesterday, got him back in there today and he answered the bell.”

And the ‘get your attention’ moment had to belong to closer Andrew Magno, who made it a point to mention after the final out that it was important for him to earn the head coach’s trust.  “Did he get it?”  Beals was asked.  “Oh, yeah,” he answered with a satisfied smile. 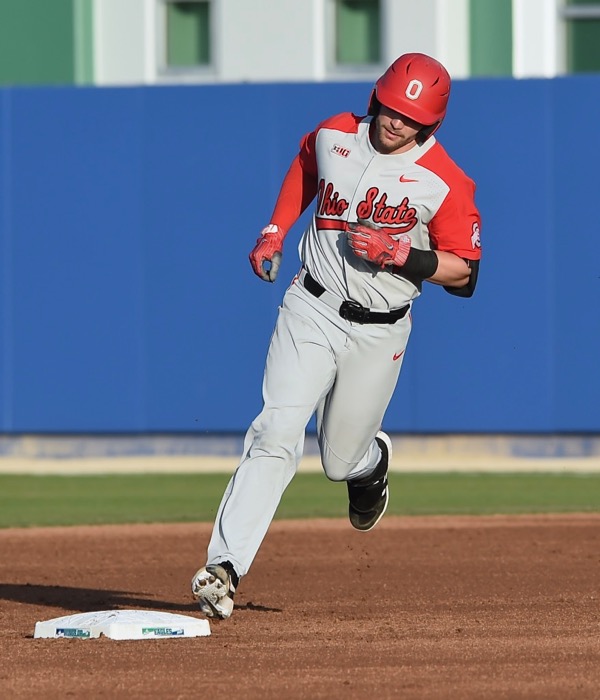 Cherry’s home run trot in the second gave the Buckeyes the early lead…and the only run they needed to win. 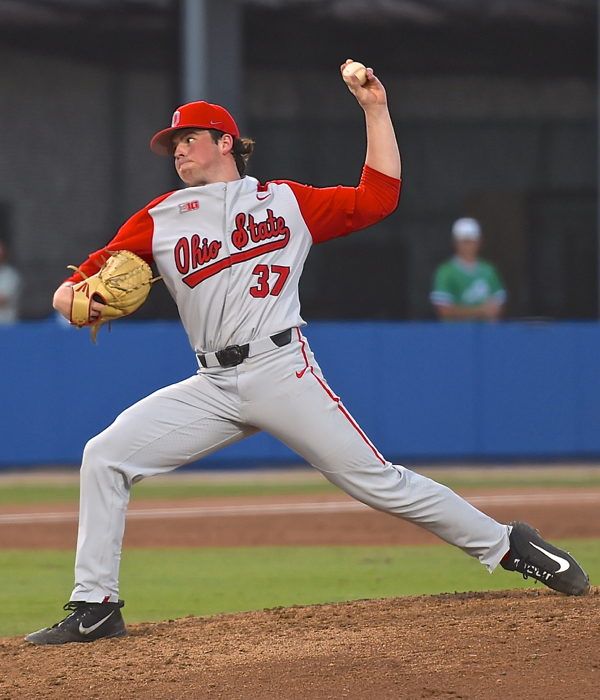 Starter Griffan Smith was nigh onto perfect for the first five innings - no runs, on 1 hit, and struck out 7 - to earn the win. (Press Pros Feature Photos By Julie McMaken Wright and Sonny Fulks)