The trend of recent weeks manifested itself once again…the Buckeyes shot poorly and turned the ball over…lost to Michigan State in East Lansing.

Columbus – It reached the point weeks ago when there was no real need to get out the reading glasses in order to dissect the shortcomings and faults of the Ohio State basketball team.

As the group The Dramatics sang in the 1970s, what you see is what you get from the Buckeyes. They work hard most of the time, but the lack of a true point guard, turnovers, fouls and bad decisions are what have doomed this team since the New Year.

Also blame having lost eight of 14 games on a Big Ten conference that is deep, all that youth, a dearth of blue chip skill at some positions and, maybe most of all, a lack of leadership.

In a 62-44 victory on Sunday at the Breslin Center, big boy Michigan State seemingly read from the script that most conference teams follow against Ohio State by forcing 32 percent shooting from the floor and 15 turnovers.

The Spartans (21-5, 12-3) scored all but two of the game’s final 22 points in blowing open what had been a pretty interesting afternoon.

This story, though, won’t be heavy on the painful details for Buckeyes fans. It will be about what Ohio State (16-9, 6-8) must do just to get a sniff at an at-large spot in the NCAA tournament.

ESPN bracket expert Howie Schwab had the team getting a No 10 seeding before tip-off.

The NCAA had the Buckeyes No. 44 according the first-year NCAA Evaluation Tool that will go a long way in which teams get into the 64-team field.

KenPom.com, who is one of the geek gurus of college hoops, also had the Buckeyes at No 44.

How tough was it in East Lansing? Kaleb Wesson led the Buckeyes in scoring….with 9 points!

That number surely will get higher as in north of 50 after losses to Illinois, a so-called bad Quadrant 3 team, and Michigan State.

What Ohio State badly needs is a victory – just one stinking victory – over one of the elite in the Big Ten.

There are six games remaining in the regular season, but the only winnable ones have to be the pair against Northwestern. If everything plays out, the Buckeyes will be 18-13 going into the conference tournament.

Then you will hear and read a lot about the Buckeyes needing to win a game or two in Chicago to get back into the NCAA tournament discussion.

The Buckeyes get high marks in the NET for non-conference wins over Cincinnati and Creighton and having one ugly loss to Illinois, but they lack the point-getting power of a quality Big Ten win.

Where does that victory come from?

Answer: Probably not. The teams play next Saturday in College Park. The Terps gave Ohio State fits with their length and athleticism in a slam-dunk 75-61 victory on January 18 at The Schott.

Answer: Again, probably not. At times, the Hawkeyes were downright dazzling behind their long big men and sharp-shooting perimeter players during a 72-62 victory in the first meeting on January 12 in Iowa City.

The change in venue might help, but don’t count on it. The Schott hasn’t exactly been packed with screaming fans. The only sell-out has been 18,809 for Michigan State.

Answer: Don’t put down good money with your bookie. That game will be against the hottest team in the conference and the great street-baller Carsen Edwards. And, yikes, it’s at Mackey Arena.

Answer: That’s another high mountain to climb and, again, probably is not in the cards. Like Purdue and Iowa, the Badgers righted themselves weeks ago behind possible Big Ten player of the year Ethan Happ.

This is taking into account that it’s an Ohio State home game and that guards C.J. Jackson and Keyshawn Woods will have a lot of emotion running through their veins on Senior Night. 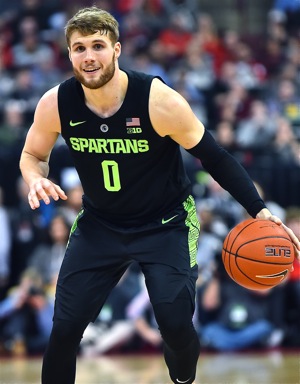 Versailles native Kyle Ahrens had a pair of late three’s that helped spell doom for the Buckeyes.

What makes things worse is that too many core players in deep funks at the moment.

Freshman guards Luther Muhammad and Duane Washington might have hit a wall. Muhammad went 1-for-9 shooting and had three turnovers against Michigan State. He has missed 18 of his last 20 shots. Washington was 1-for-7 and has missed 22 of his last 26.

Jackson had one turnover yesterday, but was 3-for-9 from the floor. With him, it’s about which C.J. will show up. He had seven turnovers against Illinois on Thursday.

Okay, a little bit about the game.

That Ohio State hung so long with the Spartans was a sign of how hard these guys play at times.

Things began to tilt Michigan State’s way when Kenny Goins hit a three-pointer for a 42-39 lead with 8:09 left to play.

Before that, Muhammad blew a lay-up on the break, Kaleb Wesson made just one of two free throws and Muhammad had a charging foul.

Jackson hit a three to tie it, but Spartans guard Kyle Ahrens of Versailles buried a trey from the baseline, Goins hit a 15-footer, Ahrens hit another beautiful-looking trey and forward Thomas Kithier had a lay-up for a 52-42 lead with 4:32.

It was out go the lights for the Buckeyes.

There was a glimmer of hope. During a 3-minute, 7-second span of the second half, Tillman was called for a third personal at 19:01, 6-foot-9 center Nick Ward of Gahanna went out for good at 17:34 because of an injured left hand and Winston picked up foul No. 3 at 16:04.

But Michigan State has a ton of players back from a championship Big Ten team, and that was that.