The buzzword of the weekend continued to be pitching, as junior Jake Vance pitched the first five innings Sunday…and the young bullpen maintained the final four for an Ohio State 5-3 win over Seton Hall.

Vance scattered five hits over the first five innings, allowed two earned runs, and exited as the beneficiary of an eventual 5-3 win over the Seton Hall Pirates, helping the Buckeyes sweep the opening weekend series three games to none.

Vance, a 6’3″ junior from Canton, struck out six, didn’t walk anyone, and messed with the minds of the swing-happy Pirates by throwing …”the change”, a pitch he features , if not his signature weapon.  After two previous days of Seth Lonsway and Garrett Burhenn throwing 90-plus, Vance had Pirate hitters ahead of themselves, looking for something with more velocity.

“Definitely a different style,”  said Stafford.  “We went with a lot of right-on-right change-ups early, some breaking balls, and a little bit of a pitching backwards philosophy.  We wanted to get them guessing, and when they started sittin’ on the change the third time through the order, we went to more fastballs and Jake had enough left to have success with it.  He gave us five innings on a Sunday, which helped our bullpen out tremendously, and it allowed us to match up in the ninth inning like we did.”

Vance, a happy-go-lucky personality who doesn’t mind being the “change of pace” among harder-throwing arms like Lonsway and Burhenn, took it all in stride.

“The most important thing is the win,”  said Vance.  “You can’t go wrong with a win, obviously.  I just pitched to my strength.  The change was working early, the fastball was kinda’ hit-or-miss, but I started to command it later in the outing, and that helped – convenient because they began to sit on the change the third time through and I was able to hit with the fastball and a couple of breaking balls.” 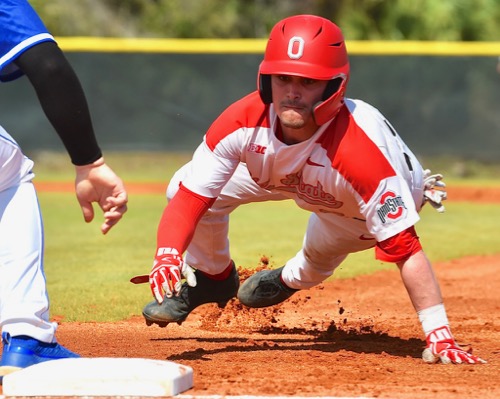 Kobie Foppe scrambles to get back to first during the Bucks’ three-run first.

The other thing that helped was Seton Hall starter Tyler Burnham’s inability to throw strikes early, walking three in the first inning and setting the stage for a Conner Pohl two-run double and freshman third baseman Zach Dezenzo’s first collegiate hit, which drove in another run.  Ultimately, it amounted to a three-run first that gave Vance that coveted pitching advantage.

An inning later Dominic Canzone took advantage of a gusting wind and rode a fastball by Pirate reliever Brennan O’Neill out to right field, scoring Kobie Foppe ahead of him for a 5-0 advantage.

That was all Vance needed, in essence, as he settled in to a rhythm, and gained momentum with each succeeding hitter.  He did allow single runs in the fourth and fifth innings, when Seton Hall hit back-to-back doubles in each to close to within a 5-2 margin.  But the overall line was satisfactory to coach Greg Beals:  5 innings, 5 hits, no walks, and six strikeouts…AND A WIN!

“We played clean baseball again,”  said Beals.  “And to come out on opening weekend and stay in character like we did for three games was good for me to see.

“Jake absolutely was a big part of that because he gave us what we wanted – a quality start for five innings and did what he needs to do.  He hit with all three of his pitches.  He utilized the change, the breaking pitch, and the fastball, and that’s what we need from him.  If our offense can come through like it did in the early innings, and Jake can do what he did today as a Sunday starter, we’re going to win a lot of games on Sunday.” 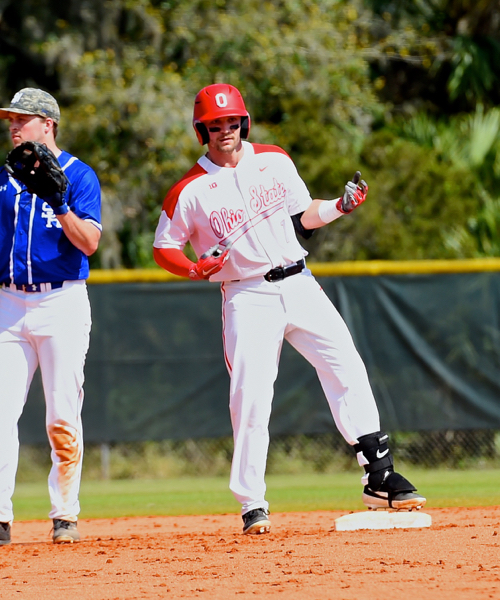 Brady Cherry doing the ‘air guitar’ double ‘groove-on’ after his double in the seventh.

Seton Hall dropped to a disappointing 0-3 with 3 runs on 10 hits, played error-free for the third day in a row, and left 6 men on base.

But in addition to the fact of winning, for the third time in as many days youth was served…as new faces in new positions played and contributed to the win.

Freshman third baseman Zach Dezenzo went 2 for 4, drove in one, and wore the biggest smile of all after the game.

“The win is the most important,”  said Dezenzo (Marlington HS, Alliance).  “Starting the year 3-0 is awesome, getting the sweep, and going to Florida Gulf Coast tomorrow with a lot of momentum – what a good way to start the year.” 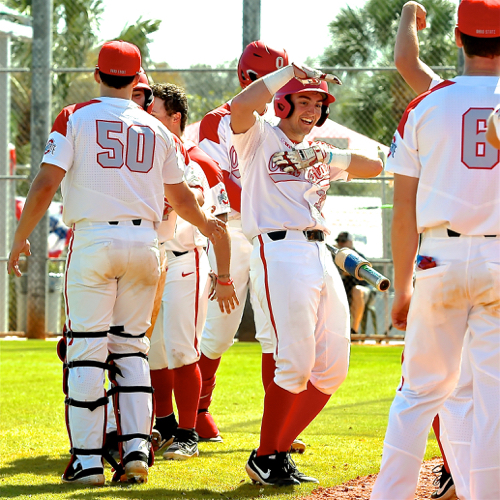 The dugout welcomed Dom Canzone following his second homer of the season in the second inning.

“He got off the schneid today,”  said Beals of Dezenzo.  “Being a freshman, he didn’t get a knock on Friday but today he came back had a couple of good at bats.  Zach has a bright future and he’s gonna’ be a really good baseball player for us.”

And the bullpen – the young bullpen – was tested as freshmen Mitch Milheim pitched a scoreless sixth, Will Pfennig gave up a single unearned run with two innings of work (the 7th and 8th), and Andrew Magno and Thomas Waning combined for a save (Waning, officially) in the top of the ninth.

“That was good to see because right now we need those guys to complement each other,”  Beals added. “We used them situationally today (Magno and Waning) and hopefully that grows.  You want to create a role for guys, even though I don’t think that Magno is necessarily a situational pitcher.  But the way it set up for us today they had a lefty lead off the inning and then four righthanders in a row.  We thought the matchups were right, and our guys went out and took care of it.”

The big thing…they all threw strikes!

“Yeah, we’re throwing strikes,”  smiled Beals.  “We threw strikes for three games in a row, and that’s critical that we do that.  Coach Stafford, DeLucia…we worked hard on that in the off-season.  This is a young staff with not much experience and we busted tail to make sure they were as prepared as possible.”

The ‘weekend’ concludes tomorrow with a single game at Florida Gulf Coast, who took two of three games over the weekend from Bethune-Cookman (an OSU opponent in two weeks), and that game tips off a 5 pm.  Sophomore lefthander Griffan Smith is the projected starter. 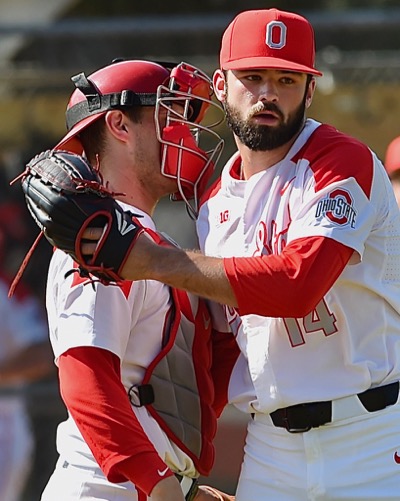 Thomas Waning and Brent Todys celebrate the final out.

The hitting stars in Sunday’s win were Zach Dezenzo (2 for 4) and Dom Canzone, who likewise had a pair of hits in four ABs, including his second homer of the trip, and the year.

Sophomore catcher Dillon Dingler missed playing for the second day in a row (precautionary measures) with a bruised hand.  Backup Brent Todys filled in and had a double in four official at bats.

And left fielder Brady Cherry had a double in three official at bats.  Cherry finished the weekend with 4 hits and a home run in 11 ABs for a .364 average.  Todys and Canzone each finished with 4 hits in 9 ABs for a team-leading .444 average. 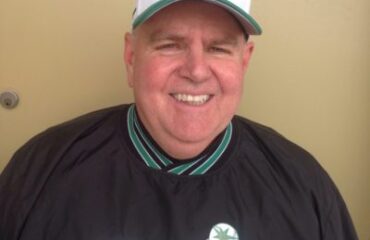