Columbus – The fitting sample size of Ohio State trying to fit square pegs into round holes against Illinois occurred just inside the 10-minute mark of the second half when Kyle Young couldn’t get a break or give himself one.

With about nine minutes remaining, Young’s hustle put him into position for success when he took down a rebound after a missed shot by Keyshawn Woods, went up strong with the basketball but missed a point-blank lay-up.

The shot wasn’t even close.

Fifteen seconds later, some of that frustration burst out at the defensive end when he was called for his fourth foul.

Nine seconds after that, Young was running across the court to the bench for good after being tagged with his fifth foul.

It was that kind of game for the Buckeyes as they checked in their usual high turnover total with18, including seven by senior point guard C.J. Jackson, and shot 36.2 percent in being head-slapped by the Illini 63-56 before 12,420 on Thursday night at The Schott.

The game was such a clunker for Ohio State (16-8, 6-7) that the loudest cheers by the mostly dead crowd came during halftime when new football coach Ryan Day grabbed the microphone and spoke a few words.

Illinois had lost eight straight games in Columbus, and they snipped the cord of that misery by limiting the Buckeyes to three baskets in the final 9:42 and two in the last 4:56.

Junior guard Andre Wesson and his teammates have never talked about the NCAA tournament in news conferences, but they know this loss was a bad one for a team that has to be on the fringe.

Sure, Penn State just beat Michigan, but the Wolverines aren’t scrapping for wins to beef up their portfolio.

“All losses hurt, but this one we needed to have,’’ Wesson said. “We weren’t prepared for how hard they play. We weren’t looking ahead. They’ve won four straight games. We just didn’t prepare right. We’re trying to make the NCAA tournament, and we’re not a lock to make it. Every game we’ve got to have right now.’’

Second-year Ohio State coach Chris Holtmann didn’t want to talk about the team’s NCAA tournament chances for good reason. His team didn’t look worthy of getting a bid to the NIT.

“A loss is a loss,’’ Holtmann said. “People look at it differently. I’m disappointed after every loss, whoever it is, whatever time it is and whatever point in the season.’’

Asked about whether he’ll talk to the players about the post-season, he had a ready response.

“We’ll talk about getting better,’’ Holtmann said. “A lot of teams would like to be in the bubble picture, including the one we played tonight. Our focus is not on bubble, but improving and growing.’’

Illinois (10-15, 6-8) isn’t the same bunch that was a gang that couldn’t shoot straight early in the season. A roster of six freshmen, three sophomores, five juniors and one senior is coming together.

It has won four straight games, including against Michigan State and Maryland.

Guess what team was leading in turnovers per game at 14.1 and had an astronomical turnover percentage of 19.1 on its possessions?

“It’s a tough conference,’’ Wesson said. “Every night you can get beat if you don’t show up. We came out tonight and weren’t prepared. That’s on me and the older guys. That’s what happens. That’s how you get beat.’’ 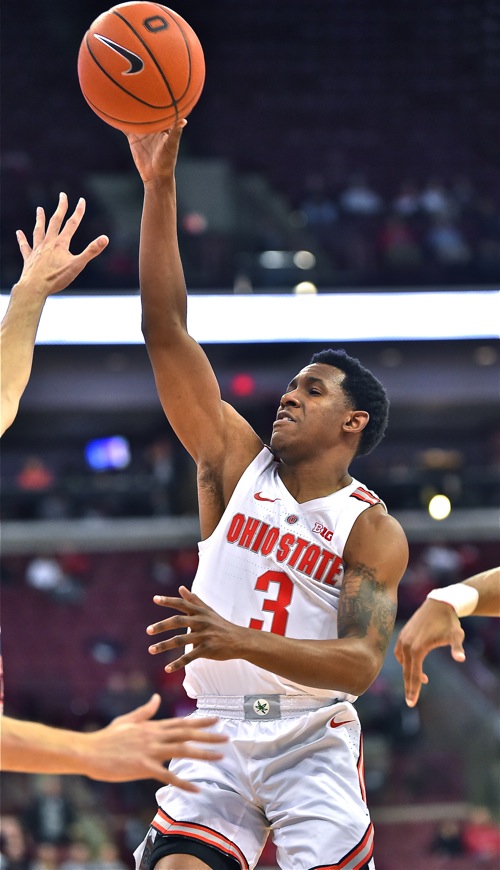 The Buckeyes had won three straight games and four of five, and this was an opportunity to get over the .500 mark in the conference with a murderer’s row schedule coming up beginning with Michigan State on Sunday in East Lansing.

There have zero head-turning victories in the Big Ten for Ohio State, and its chances to snag one will come in a hurry with Michigan State, Maryland, Iowa, Purdue and Wisconsin down the stretch.

Illinois played such an in-your-face style that it threw off Ohio State from the jump.

Center Giorgi Bezhanishvilli dogged Kaleb Wesson everywhere he went and limited him to 11 points on 3-for-7 shooting. And, yes, Wesson did foul out.

Guard Luther Muhammad appeared to be resistant to having those bad freshman games, but the averages finally caught up with him in game No. 24. He went 0-for-6 and scored his only two points from the free throw line with 57 seconds left.

But it was the helter-skelter play of Jackson that really cost Ohio State. He also had two shots blocked.

“Seven turnovers are a lot,’’ Holtmann said. “I don’t question how hard he competed, but those turnovers were critical.’’

The Buckeyes had one sparkling moment. Freshman guard Duane Washington dunked off the fast break, was fouled by Alan Griffin and hit the free throw to provide a 45-44 lead with 8:30 remaining.

But there were so many busted possessions after that, starting with Muhammad hitting Kaleb Wesson in the back with a pass with 6:07 left.

Illinois took a 51-46 lead with 5:13 left on a three-pointer by Ayo Dosunmu, but it felt like the advantage was double that.

Coach Brad Underwood and his staff had the players looking like young executives on the flight to Columbus and the drive to the arena for a reason. The team hadn’t had a true road win.

“Our guys all wore suits and ties today and on the trip,’’ he said. “It was a business-like approach. We’ve been trying to get them to understand how hard it is to win on the road. Obviously, this building has been very, very difficult for us. It was a team effort to hold down a team offensively that has been shooting the cover off of it. It was just good old-fashioned grit and our defense.’’

Underwood said a big key was pressuring Muhammad on the perimeter.

“I think our pressure had something to do with that,’’ he said. “He was shooting something like 57 or 58 percent in his last five games. This team was getting about 40 percent of its offense from the three, and we were trying to make them finish.’’

The Buckeyes were 2-for-13 from three-point range.