Toppin’s treadmarks were all over Saint Joseph’s uniforms after the Flyers scored a 75-64 Atlantic-10 win.  The statistics say enough about Toppin’s night, 25 points and 12 rebounds. But they don’t say enough.

DAYTON — It was poetic justice, or poetic license, or anything else poetic that Obi Toppin put the toppings on the University Dayton’s 75-64 victory over Saint Joseph’s Tuesday night in UD Arena.

The 6-foot-9 red shirt freshman from Ossining, N.Y. doesn’t even start. In nearly every game he is sitting on a blue chair on the sidelines when the game begins, biding his time. Usually it is five or six minutes before he gets in the game. And it’s the same scenario to start the second half.

And this is how it went Tuesday night in front 12,628 fans. The game begins and Toppin is sitting.

Saint Joseph’s, one of the poorest shooting teams in the A-10, missed its first shot and then buried eight straight. Charlie Brown, the league’s leading scorer with a 20-point average, made four straight shots, including two threes.

It was like the Hawks were throwing marbles in a manhole.

The Flyers quickly fell behind and they were down 17-12 when Toppin was unleashed. It took him a while to work into a lather and the Flyers trailed 23-15 midway through the half. 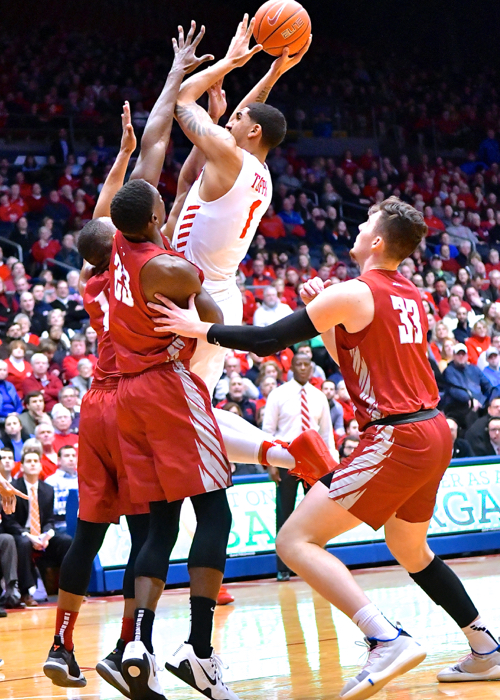 Obi Toppin scores an average 12.9 points a game, and is No. 3 in the country in field goal percentage at .692

It was Toppin Time.

Obi underneath. Obi at the rim. Obi at the hoop T. Obi slamming one home. Toppin’s 10 points in six minutes pushed the Flyers ahead, 29-26.

Ryan Mikesell, who augmented Toppin’s 25 with 21 points, scored a conventional three to start the second half and the Flyers appeared on their way to an easy one with a 42-30 lead.

It was not to be. With Toppin again on the bench, Saint Joseph’s banged back to tie it, 50-50, with 10:31 to go and the Flyer Faithful squirming in their chilly seats.

It was Toppin Time II.

Toppin on a dunk. Toppin twice rebound his own two misses shots and putting it back in. Toppin underneath. Toppin at the hoop for a basket and a free throw.

Suddenly the Flyers were up again 59-52 after Toppin outscored the Hawks, 9-2, in another four-minute explosion.

Then to put his final fingerprints on this one he hit two free throws and slammed home another dunk in the final minute.

So what does a guy have to do to earn a starting spot on the 14-7 Flyers, 6-2 in the A-10? His name doesn’t even appear on the front page of the team’s media game notes.

He takes the advisable diplomatic approach when asked about starting. 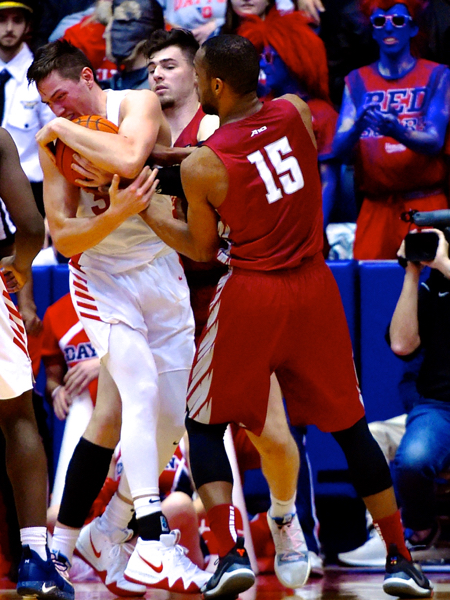 So what does he do at the game’s start when he isn’t in there. He doesn’t work crossword puzzles or count the house.

“I just stay ready so when coach calls my name I’m ready to go,” he said. “I’m so into the game I don’t notice the time ticking away.”

Toppin puts his team on the bench to practical use before he enters.

“I look at how they play against Josh Cunningham because they usually play J0sh the same way they are going to play me. I see if they double-up on him or load up on him. I know then when I get into the game if I am going to have to pass it out or take my time and score. I have a better understanding of the game when I get in there.”

Of his success around the hoop on this night, Toppin said, “When we were preparing for the game, we knew we were going to go inside,” he said. “Coach told everybody we would have an advantage inside and we used it to our advantage.”

Mikesell admits he is in awe of what Obi does on a basketball floor, especially always Obi-on-the-spot to grab missed shots and slams them home.

“He always surprises with his random dunks where he will just come to hoop, grab the ball and dunk it,” said Mikesell. “It’s a God-given talent, but it’s still crazy.

“I’m used to what Obi does because I see it every day in practime,” Mikesell added. “Everybody sees those dunks, but he was doing it in practice last year (when he red-shirted). I knew going into this season he was going to have a great year.” 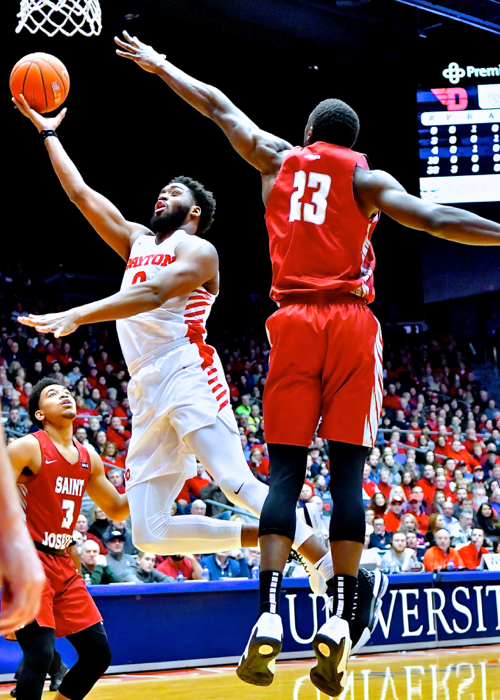 Josh Cunningham sails to the hoop for a pair of points.

Asked if he’d like to jam home a few slams the way Obi does, Mikesell laughed and said, “Oh, yeah. I tell him, ‘Just for a day. Let me have your hops for just a day. I’d like to see what it’s like to look down on the rim.”

Toppin laughed and said, “And, yeah, and I’d like to sho0t like he does. I wish I had his guns.

After Charlie Br0wn scored 10 points his first four trips down the floor, Mikesell and Dwayne Cohill combined to put a lid on him. After their 10-point flurry, he scored only nine more, one below his average.

“We got a really, really good defensive effort out of our freshman Dwayne Cohill,” said Flyers coach Anthony Grant. “He stopped you to the challenge because Charlie Brown (he’s no clown) is one of the more dynamic scorers we’ll face. Dwayne made it difficult for him by being locked to his hip.”

Grant was mostly pleased by the sound of Mikesell’s voice on the floor and said, “His leadership, with his voice, kept us together. When they were throwing some haymakers and had us back on our heels, he calmed the st0rm for us by using his voice to keep us together.

“We did a real go0d job tonight of understanding where we had the advantage (under the basket) by going inside and the guys made a great effort to stay with that,” said Grant.

With Toppin playing the part of Sherwin-Williams, the Flyers owned the paint 46-20.

Saint Joseph’s left town with a 9-12 record, 2-6 in the A10. But the Hawks put up the good fight despite the fact coach Phil Martelli was playing with a thin deck, only seven scholarship players, due to injuries. As a result, the Flyers received 32 points off the bench to 11 for the Hawks. 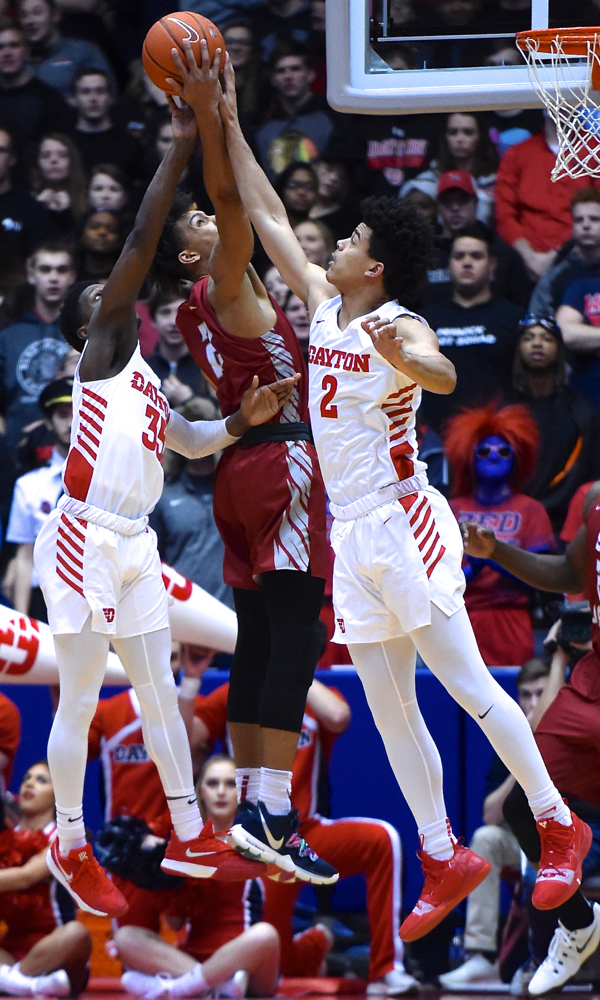 “We got a really, really good defensive effort out of our freshman Dwayne Cohill (35)” – Flyers coach Anthony Grant. 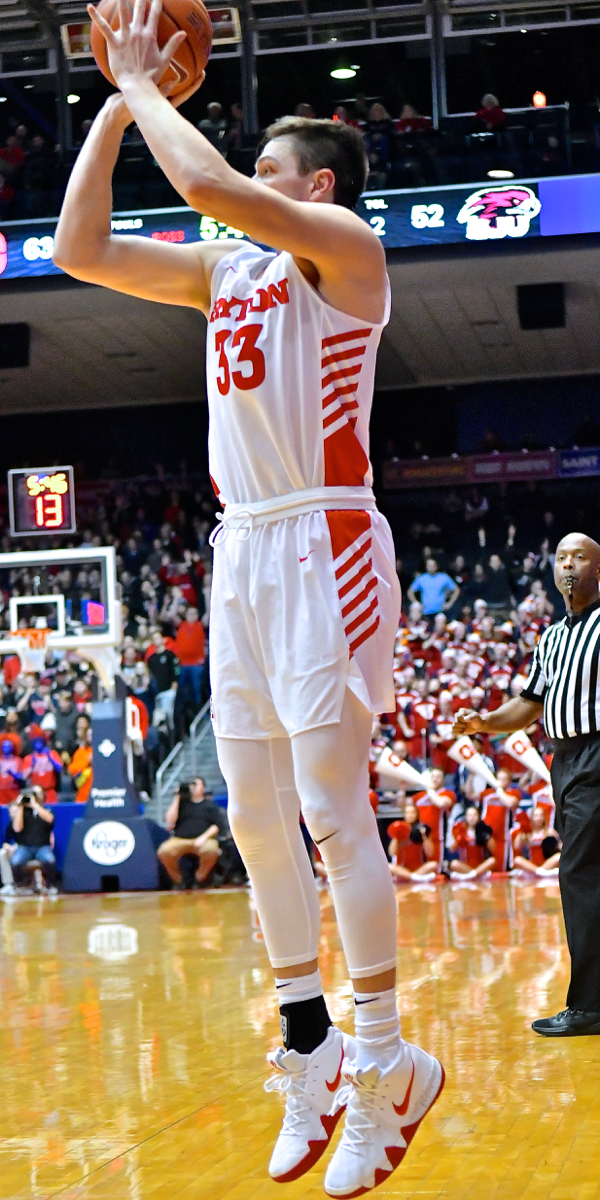