When most people die too soon they leave a lot to be determined about how they’ll be remembered. Like everything else he did, Kevin Finfrock beat that rap. Everyone who really knew him remembers not only what he was, but what he grew to be.

Most will remember former Covington head coach Kevin Finfrock as a successful head football coach for the Buccs, compiling a 34-9 record in four years between 2003 and 2006.  During that time he took the Buccs to the Division VI playoffs three times.

Others will remember him for being one of the most over-achieving athletes in the history of the OHSAA.  That’s right…the OHSAA!  As a running back at Covington High School back in the late 70s he wasn’t bigger than a bar of soap.  Yet, he the beat the odds of his size, running for 1,300 yards in his senior year.  He played on the Buccs’ ’81 basketball team that won 24 games and went to the regional tournament.  Later, he attended Defiance College where he became an NAIA All-American – three times – and became a member of that school’s hall of fame.

He even considered the National Football League, and accepted an invitation to ‘walk-on’ as a special teams back, because of his speed and toughness.

“You know, you get hit in high school and college and you forget it the next day,” he once laughed to me.  “But when they hit you in the NFL you stay hit.  You remember it a lot longer.”

He finished playing and went into education, teaching health at Piqua High School for several years, where he hooked up with coach Bill Nees as one of his assistants.  He over-achieved in coaching, as well, and quickly gained the respect of Nees and the athletes he mentored.  Everyone he touched remembered him for being ‘Finny’ – competitive, tough as the moment, and determined to conquer the next challenge.

That took him back to Covington, where he served as Ted Peacock’s offensive coach on a team that ultimately won 45 consecutive league games.  Determined to get to the next level, he worked tirelessly in off-seasons, tweaking his attack, adapting to the ever-changing talents of the roster, and the roster at Covington was always talented – Boomer Schmidt, Brady Reck, Ross Mohler, Josh Burelison, and Gene Studebaker. 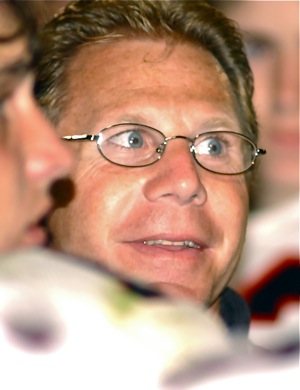 He left coaching on unfortunate terms after an incident at a high school basketball game at West Milton in 2007.  A fan was verbally abusive to Finfrock’s daughter playing basketball for the Bulldogs, and carried it over to Finny during halftime.  He took care of it.  It cost him, and dearly – teaching, coaching, and his confidence in people and the system of justice.  I will always remember how it got big headlines in the local papers – the photos and the narrative.  Yet, when charges were dismissed there was never a word printed to clear his name.  I think that haunted him for the rest of his life.

We became closer after coaching, and for several years Finny and son Jake would travel with me, hunting pheasants in Iowa.  It’s where I began to see another side of him.  Like with everything else, he had to be as good as he could be.  Pride in accomplishment was always a motivation.

He loved his kids, his family, and the outdoors.  But just as important, he loved the next challenge in life.  He once told me that everything happens for a reason, and in his last  years he would remind me when we talked that the greatest challenge to master…was that of humility.  “We can’t be what we once were because that doesn’t last,”  he shared after coaching at Bethel for a couple of years.  “At some point you have to be a person you want people to remember.  I’m gonna do it.”

Coaching never worked out again for him, although he kept up with the game as Jake became an outstanding running back at Milton Union.  Diminutive in size, he reminded everyone of how Dad did it when he played – quick, tough, and determined.

He took up golf, and like football, coaching, and life, he dedicated himself to learning how to enjoy another, different challenge.  He quietly worked out of the limelight, and when I would call to check up on him he always answered with, “How are YOU doing?  I’m doing fine.”

I’ve never met a guy who enjoyed winning as much – never knew a guy so passionate over sharing that gift with the young people he coached.  There was only one reason to play, and that was to win.  If you didn’t, don’t make excuses.  Just come back again, and again.  Don’t quit.  Adapt.  Remake yourself.  You can’t always be what you once were, so prove you have the qualities to win as a person, a father, and friend.

He figured that out, from the impression he made as athlete and coach…to the person we’ll always remember. 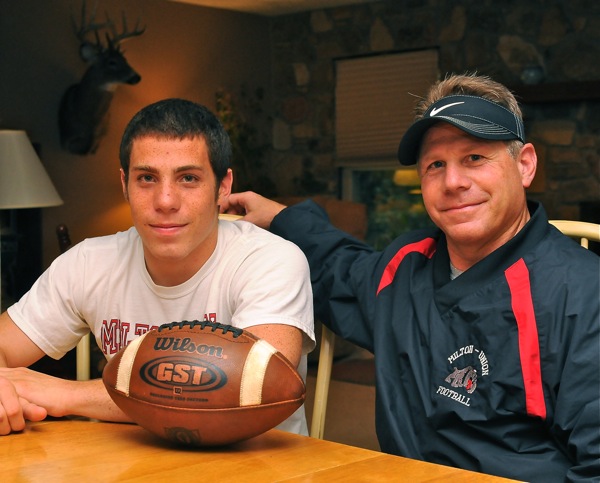 'Finny' (right) with son Jake, who followed in his footsteps as an outstanding running back at Milton Union. (Press Pros File Photos)