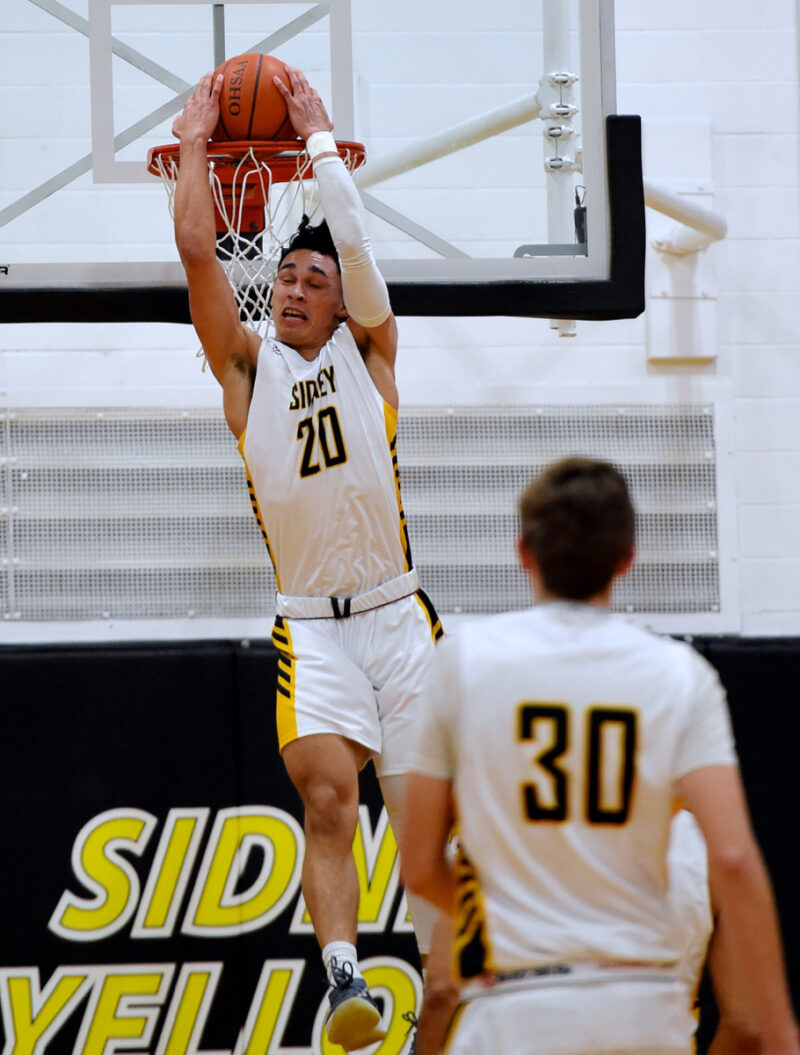 Dunkathon…Give or take, Gordon threw down seven of ’em in his record-setting performance against Wapak.

They came to see a show, a possible new scoring record, and oh yeah, a win.  And Sidney’s Andre Gordon covered it all and sent everyone home happy, with the ‘Jackets’ win over Wapakoneta.

Sidney – Afterwards, Sidney Andre Gordon would say that he would have been happy with a mere two points…as long as his team got the ‘Dub’.

‘Dub’, by the way, is the current vernacular being used in basketball culture, meaning ‘W’, as in ‘win’.  But truth be known, had Gordon not had a record-setting night Monday, and what his coach would later call his most complete game of the year, he wouldn’t have been happy at all – two points, twenty points, or two hundred points.

As it was he had it all covered.  The Yellow Jackets’ senior scored 42 points in Sidney’s 65-61 win over Wapakoneta Monday night, and along the way, with a free throw midway through the third quarter, he eclipsed DeWayne McCluskey’s long-standing scoring record at Sidney (30 years) of 1,745 points.  And a good thing, because the ‘Jackets needed every one of them!

It was one of those games where people expected points, because Wapak came in with an 11-4 record and a pair of the best scorers in the Western Buckeye League, seniors Aaron Good and Adam Scott.  As for Gordon, he still had the bad taste of the last four minutes against Trotwood last Friday, and yes, he was well aware that Good and Scott were capable of matching him point for point.  He went about setting the bar high immediately. 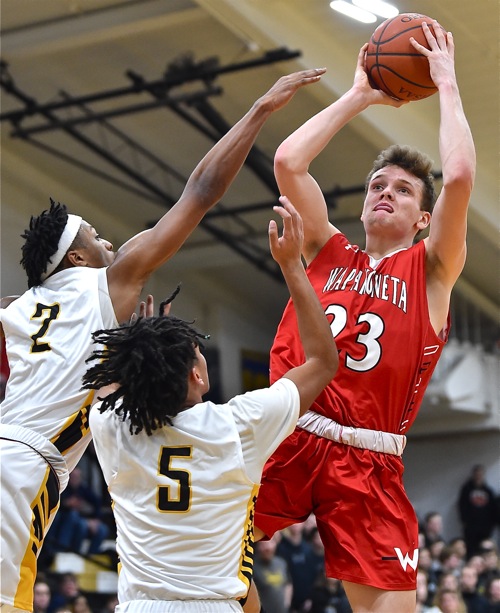 Wapak’s Adam Scott put up a formidable challenge of his own, with 32 points.

He started things off with a pair of thunderous dunks off steals in the open court, on his way to 10 first quarter points and a 21-11 Sidney lead.  Wapak looked shell-shocked, and like a team that couldn’t defend themselves, much less defend Andre Gordon.  Adam Scott did what he could, scoring 8 rather overlooked points.But as it turned out the Redskins weren’t shell-shocked at all, and came back to outscore Sidney 16-11 in the second quarter, despite two more dunks and 11 more Gordon points, and cut what had been a double-digit deficit to just 5 points, 32-27, by halftime.

“We came out hot,”  said Sidney coach John Willoughby.  “But as so often happens, it’s hard to maintain that pace for four quarters.  Wapak hung in there and we came back to them a little bit.  They have good personnel, they believed in each other, and they were able to fight their way back into the game.”

In fact, thanks to the hot shooting of Scott, who finished with 32 points, and Good (who only had 11, but he spaced them well), Wapak would eventually cut Sidney’s lead to three points near the midpoint of the third quarter.  In part, because like his team, Gordon came back to the field a bit himself, scoring just eight points for the period on a pair of field goals and four free throws.  Still, Wapak failed to score in the final minute of the quarter and Gordon’s foul shots extended the lead back to seven, 46-39.

Convinced that Scott and Wapak were a real threat – that they weren’t going away – Gordon amped things up again in the fourth after receiving the game ball and a standing ovation as he set the new scoring record.  He left nothing to chance, scoring 13 points on a variety of slashes to the rim, a three-pointer, his seventh dunk of the night, and a pair of free throws. 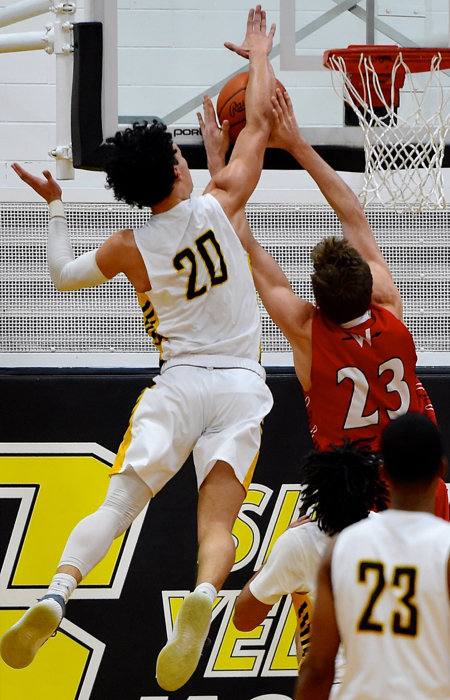 To remember me by…Wapak’s Adam Scott would have scored 34 points had it not been for this block by Andre Gordon.

Still, there were the anxious moments that come with almost every Sidney win – a pair of sloppy turnovers that helped Wapak go on a 5-0 run, missed box-outs on the defensive boards, and Scott answered Gordon’s 13 with 15 of his own for the quarter;  and with four seconds left in the game he and the ‘Skins trailed by just two points, 63-61.

However, forced to foul Gordon with three seconds on the clock, he sunk both shots to amass his game-high 42 points, and close out the game.

“He’s the real deal, and he put on a good show,”  said Wapak coach Doug Davis of Gordon’s effort.  “You saw tonight why he’s going to an upper-level Division I school (Virginia Tech).  We knew coming in that it was going to be difficult because he’s really advanced his game.  I thought he was good last year, but he took it to another level tonight.”

No argument from John Willoughby.

“He had a super game, and I’m glad he got that (the record) off his shoulders,” said the coach.  “He tried everything tonight, and he did about everything but get his 360 (dunk) in.  His jumper was nice tonight and when they backed off him he pulled up for the three and hit a few of them.  So he had it going tonight, and that was nice to see.”

How relevant was his record-setting total?  His 42 points amounted to exactly 65% of Sidney’s point total.  Otherwise, Darren Taborn finished with 10, Josiah Hudgins had 5, and Keith Lee and Ratez Roberts each had 4.  That was the sum total of their scoring.

“It’s not easy to score 1,700 points in a career,”  said Willoughby, speaking of Gordon’s milestone.  “You’ve got to shoot the ball well, you have to have teammates that are acceptable to that, you have to have coaches that accept it, and it’s not that Andre comes out and shoots too much.  If anything, he probably doesn’t shoot enough.  So it’s a testament to Andre and the way he plays that he’s talented enough to do that.” 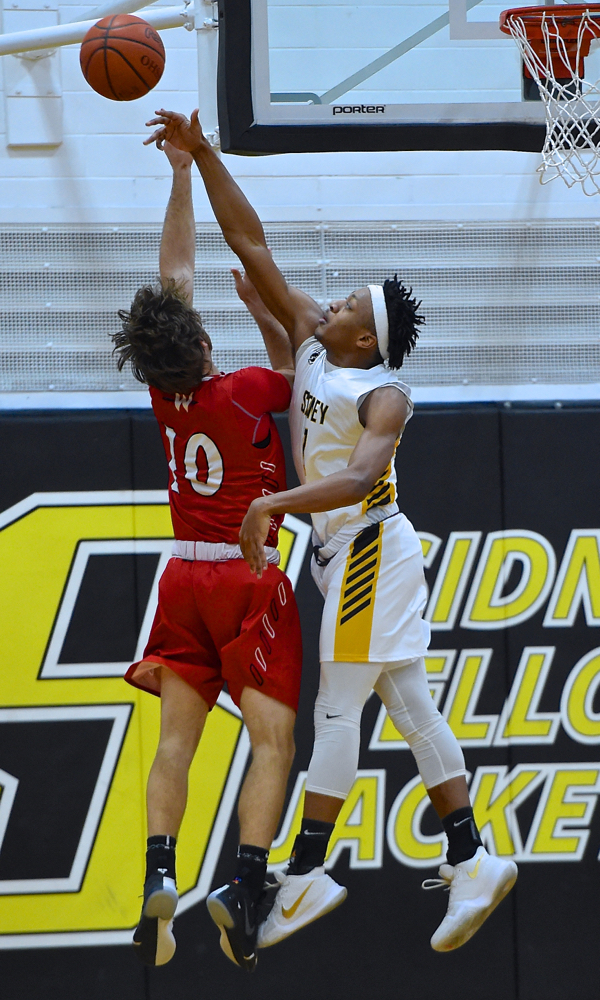 Not all Andre…Sidney’s Ratez Roberts played some defense, too, rejecting the shot attempt of Wapak’s Brady Erb.

To the record setter himself, its significance could not be overlooked.  He was still carrying the game ball around thirty minutes afterwards and joked, “This is going to bed with me tonight.”

But he was also quick to admit that the ball, and the moment, meant all the more because it came with a win.

“It feels great and everyone since my freshman year has helped me get here,”  he assured.  “It feels good to get this with my teammates.  But the ‘dub’ is nice.  I wouldn’t care if I got two points as long as we win.  It was nice (after the Trotwood game) to come out, get a fast start, and get a new streak going…we got seven more games, let’s go 7-0.”

But the competitor in Gordon’s words were unmistakable.  The record is great, the win is even better, but there was no mistaking that he also appreciated the challenge put up by a good Wapak team, and another good player in Adam Scott.

“He can hoop,”  smiled Gordon, speaking of Scott.  “That made the points and the record more relevant, because they beat us the last two years.  No one on the team was having that tonight, so we came out and were able to end up pretty strong.  They were a really good team.”

Scott’s 32, Good’s 11, and 9 points by the Ambos brothers, Nate and Noah, accounted for all but ten of the Redskins’ points, making the matchup of Scott and Gordon something everyone would talk about after the game, and no doubt for the rest of the season.

It’s one thing to see a record set.  It’s another thing to see it made necessary by a formidable challenge.  Andre Gordon, indeed, has taken his game to another level, and it’s a good thing.  They needed every point. 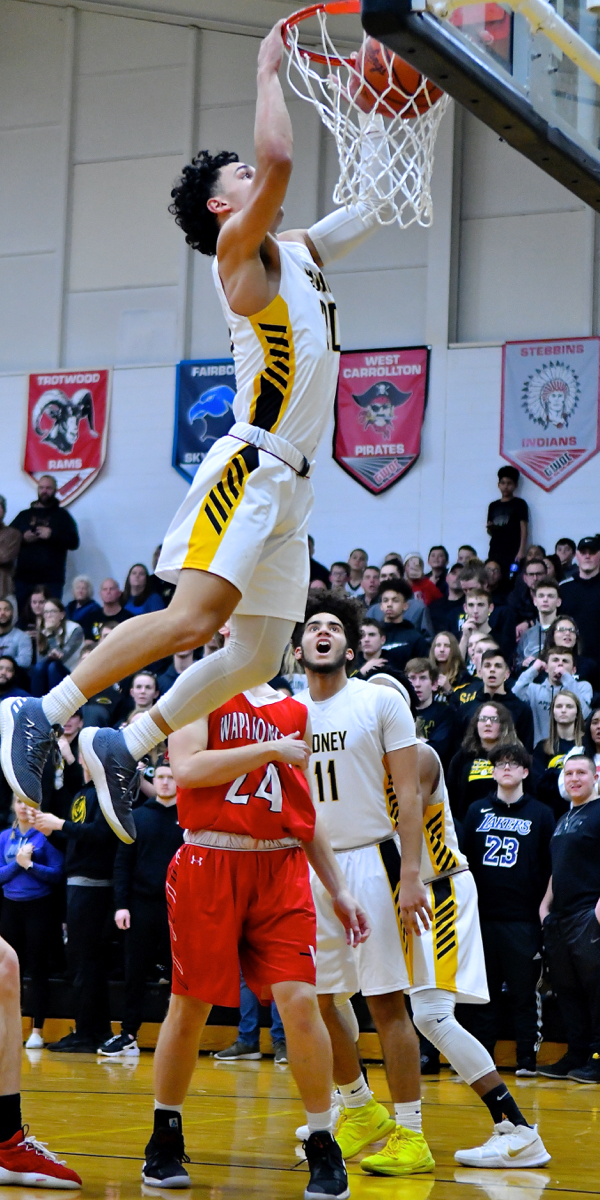 They came to see a show, a possible new scoring record, and oh yeah, a win.  And Sidney’s Andre Gordon covered it all and sent everyone home happy.