They played well in spurts…they made big plays in spurts.  But Dayton could not sustain their spurts when it counted most, losing Wednesday in the final three minutes to George Mason.

What Grant described in those ninety words was a 67-63 loss to George Mason (12-8, 6-1 A-10), in which the Flyers (12-7, 4-2 A-10) played well enough, and played well long enough, to give themselves multiple chances to take control of the game and ultimately win.  But as Grant said, at critical points of the game – and especially in the game’s final three minutes – they just didn’t execute.

They got off well, feeding off a fast start by Josh Cunningham (15 points) and Ryan Mikesell, who scored 7 of his 10 points for the night in the game’s first seven minutes.  But George Mason is a sound, fundamental team that does a lot of little things well, and exacts a lot of energy from 5’11” senior guard Otis Livingston, a slasher who got to the rim enough to score 13 points (his average).  And when he didn’t score he dished out 5 assists to set up teammates Jared Reuter (14 pts) and Justin Kier (12 pts).   The three of them accounted for 39 of Mason’s 67 points, and their sense of timing was simply impeccable.  Every time that Dayton would take a lead, or make a shot to gain momentum, Livingston, Reuter, or Kier would answer. 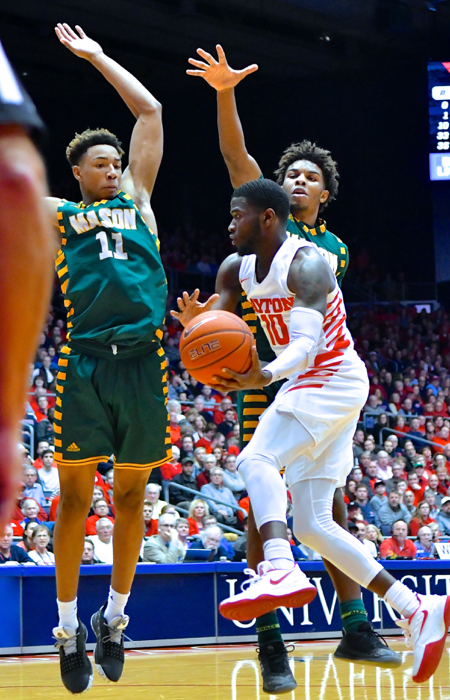 “They packed in the paint and basically gave us the outside shots,”  said Ryan Mikesell.  “Unfortunately they didn’t go in tonight.”

But Mason did one thing that twelve previous Flyer opponents had not been able to do – they shut down the points in the paint, holding Cunningham to those 15 points, and, they negated the crowd-igniting influence of Obi Toppin, who scored 11 points for the game, but had just one dunk in the first half…and none in the second.

“We tried to tighten things up inside, because Dayton’s a very good offensive team,”  said George Mason coach Dave Paulsen afterwards.  “That, and we controlled the defensive boards.  They score a lot on offensive rebounds and we took some of that away.  And, we wanted to keep a lid on Toppin because he does so much to get the crowd behind them.  This is a very tough place to play.”

Still, Cunningham and Mikesell scored 18 of Dayton’s 33 points before the break and the Flyers led at halftime, 33-31.

It played out that way for most of the second half, as the lead changed hands eleven times…and the game was tied six times.  The biggest lead for either team was four points, while Dayton played some of its best interior defense of the season…in spurts.  Ryan Mikesell had a pair of blocks (and three for the game), but on the other end of the court Mason’s interior effort was similarly tough on Cunningham and Toppin.  Cunningham would score just four times in the game’s final twenty minutes, while Toppin connected for nine of his 11 points during the same stretch.  But to Dave Paulsen’s design, he never got the crowd into crazy mode.

Jordan Davis, who had shot so spectacularly from three-point range in recent games, struggled, and was scoreless for the first half – 0 for 7 overall, and 0 for 5 from behind the arc.   But in the second half he finally hit a pair of threes to give Dayton another spurt, and a pair of lead changes;  as did Jalen Crutcher, who finally connected from the wing for his only deep make of the game. But Davis would finish with 6 points, Crutcher with 8, far below their recent production.

In the meantime Otis Livingston was driving, shooting…dishin’, finding Reuter for 8 second half points while he scored 8 of his own.  And as the clock wound down to the 5:00 mark of the second half Mason owned a 60-58 lead.  Enter Ryan Mikesell. 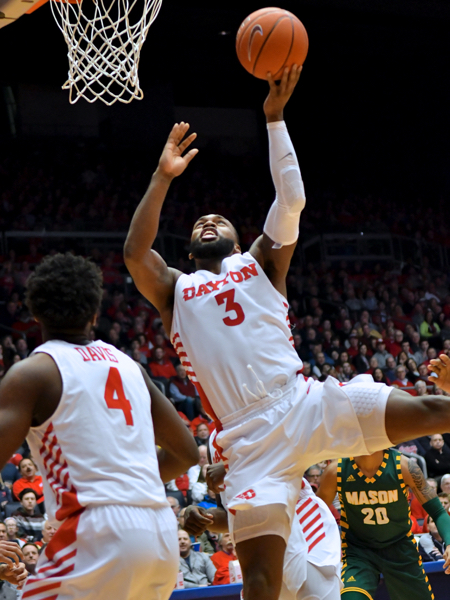 Trey Landers didn’t score much (6 pts), but he got these two in the first half.

At 5:11 Mikesell rose and launched a three-pointer from the deep corner off a Josh Cunningham assist that found the mark, giving UD a 61-60 lead.  And moments later, off a missed Mason shot at the other end, Cunningham scored in transition to give the Flyers a short 5-0 run, and a 60-60 tie, forcing a Patriot timeout.

“We didn’t panic,”  said Dave Paulsen later.  “We stuck to our game, went back to defense, and held them scoreless the rest of the way.”

Held them scoreless the rest of the way?  Almost…Jordan Davis hit the second of his three-pointers with 2:58 left to give the Flyers a 63-60 lead.

But, the Flyers would not score again for the next three minutes of the game, while GM put the game away at the foul line.  To capsulize, the rim suddenly shrunk as they missed four field goal attempts.  They became sloppy with basketball, turning it over twice, and they missed the front end of a pair of one-and-ones from the foul line.

But hold on…they had one last chance with ten seconds remaining, and sonuva’ gun, they found Jalen Crutcher with one more open look for a three from the corner.  It looked short when it left his hand, and that’s how it ended up.  Short.  Game, set, match…George Mason.

“Bunkers” is proud to sponsor coverage of Flyers basketball on PressPros Magazine.com.

“They packed in the paint and basically just gave us the outside shots,”  said a dejected Ryan Mikesell, afterwards.  “We’ve been shooting those really well, but unfortunately they didn’t go in tonight.  We had some chances at the free throw line, you know, but it was a matter of execution tonight and they did a better job (down the stretch) than us.” 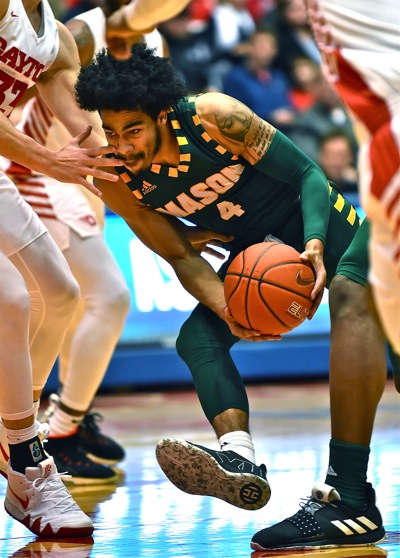 In boxing vernacular, George Mason proved Wednesday that they could take a punch, and deliver one, as well.  There were thirteen lead changes in the game, and for added pressure it was tied eight times.

“They’ve got good players, and they’re obviously a well-coached team,”  added Anthony Grant.  “This puts them at 6-1 in the league, us at 4-2, and now we’ve got an uphill battle to catch up.  We’ll try to learn some lessons from these kinds of games, like the VCU game where it was a one or two-possession game and you have to execute.  Games like that there are a dozen or so plays where if you do the right things you cut your mistakes in half.  If we do that we win the game.

“If we’re going to reach our potential at some point we’ve got to change,”  Grant added.  “We can’t keep doing the same things over and over again.  We’ve got to mature to the point where we understand that you can’t do that (make mistakes) and expect to win.”

Yes, but mistakes notwithstanding…if a couple of those late looks go down, we’re writing a different story here, and one similar to the finish at St. Bonaventure.  And those mistakes we just mentioned are soon forgotten.  But that’s basketball, as Anthony Grant concluded in his post-game remarks.  Jalen Crutcher and Jordan Davis won’t shoot it like Steph Curry every night.

Some nights the rim simply shrinks.  Sometimes like the opening on a ‘Mason’ jar. 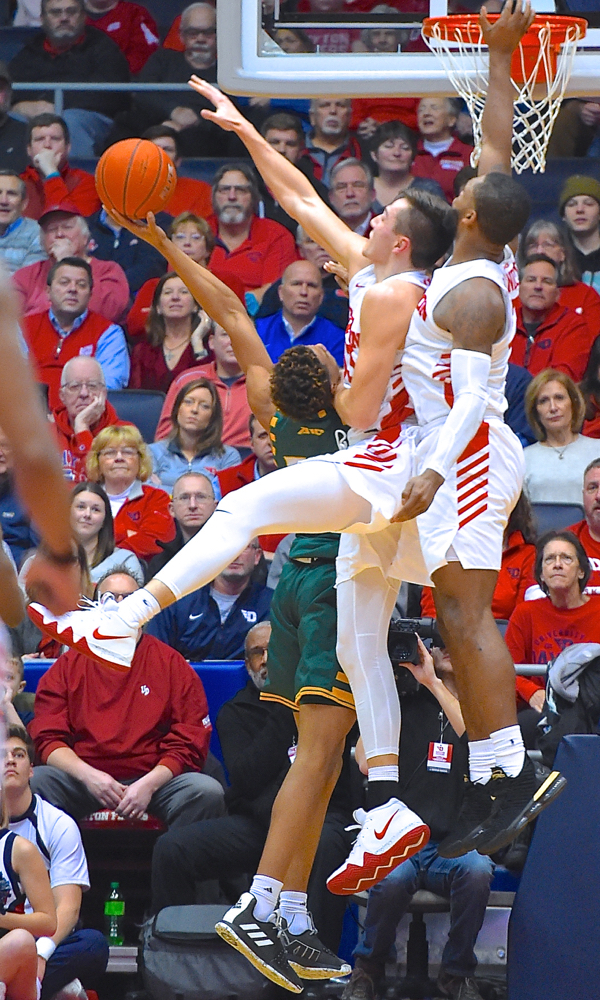 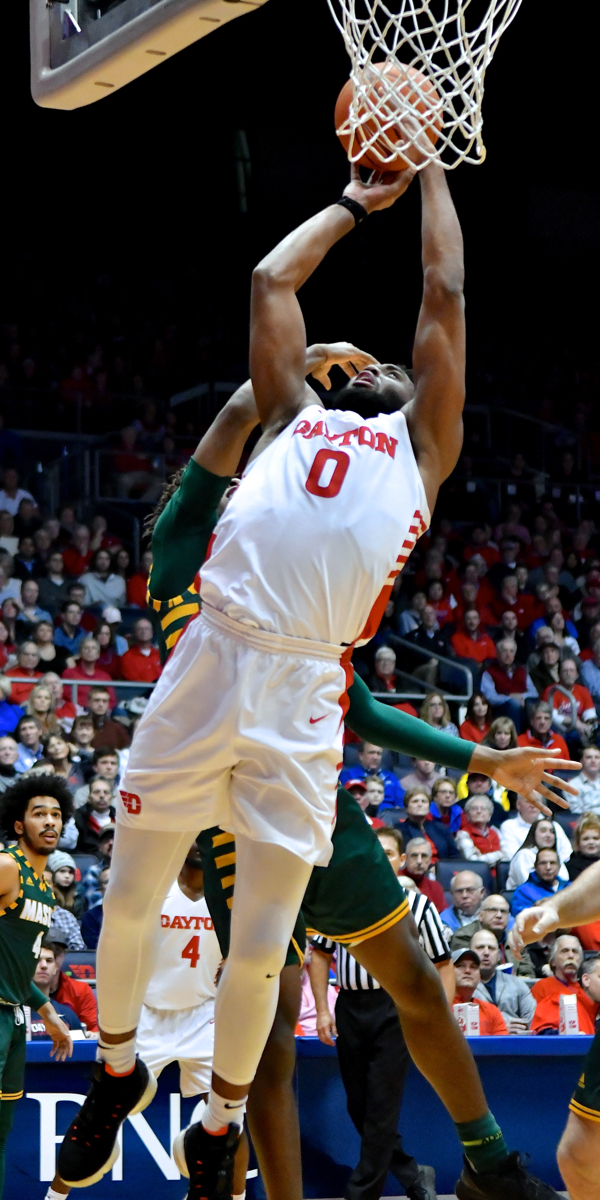