St. Henry’s defense was stifling, and the ‘Skins got just enough offense to manage a tough road win Thursday against New Bremen – a dress rehearsal for even tougher games to come…for both teams.

New Bremen – The good news for coach Chris Burden and his New Bremen Cardinals is…with nine games left on their pre-tournament schedule they won’t see defense any tougher than what they saw when they played St. Henry Thursday night.

St. Henry (10-3, 3-1 in league) limited New Bremen to barely 30% shooting from the field for the game, but more impressively, to just one made field goal for the entire first half – a three-pointer by senior guard Kelly Naylor.

The good news for St. Henry coach Wendi Moorman was…they won’t see much better, or scrappier defense, than they got in return from Burden’s Cardinals.  For in fact the Cardinals, despite their shooting woes, held St. Henry to just 19 points for the first to give themselves a chance for a second half comeback.  New Bremen trailed at the end of sixteen minutes, 19-9.

And that’s exactly what they did.  The Cardinals came out in the third quarter to score the first eight points, cut the lead to two points, before Moorman called a timeout to remind her girls to dance with the girl what brung ’em.  Translation:  Play defense and be patient on offense.

“I told them that we had to finish the game, that we still had a half to play,”  said Moorman, afterwards.  “Their defense had us rattled, and we needed to execute our offense, play our tempo of game, and play defense.”

Message received, sure enough, even as New Bremen (9-4, 2-2 in league) suddenly found some spring in their step and enough offense to keep things interesting.  They went ahead for the first time, 24-23, halfway through the third…and from there the two teams traded tempo, momentum, and the lead twice more before St. Henry eventually took things over for good, winning 44-38.

Danielle Lange led the ‘Skins with 14 points, while teammates Alyssa Buschur and Allison Siefring joined her in double figures with 12 and 10 points, respectively. 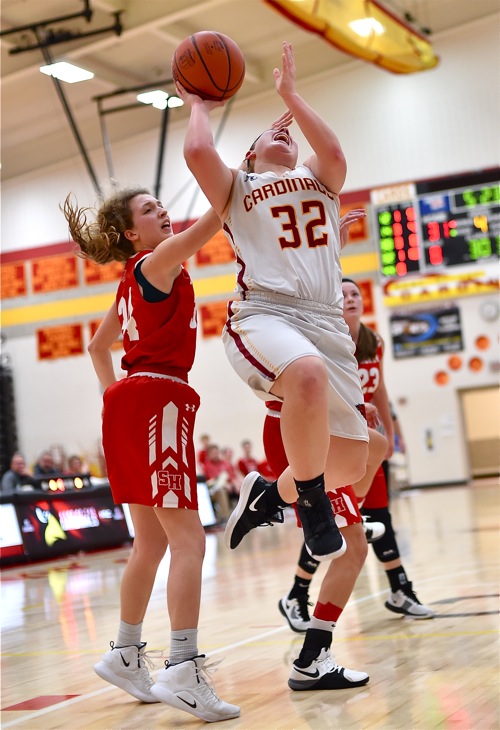 Bremen’s Kelly Naylor finds getting to the rim tough in Thursday’s loss to St. Henry.

For New Bremen, points came tougher than Cardinal condiments as Kelly Naylor and Madison Cordonnier each had 10 points, while Kaylee Freund, Abbi Thieman, and Hanna Tenkman each had 6.  No one else scored!

St. Henry’s man-to-man defense was so good that it looked liked New Bremen was playing against a zone.  Their spacing was that good, their size certainly an obstacle, and their communication seemed to be executed exactly to Moorman’s instructions.

“Defense is certainly one of our keys,”  said the Redskins’ coach.  “We talk about it all week.  It starts with defense.  We’ve played good defense all season, we continue to get better at it, and you have to play good defense to win on the road.  And, we knew we were coming to New Bremen, we were both 9-3 coming into tonight, so unfortunately someone had to lose and we had to prepare for a battle.”

New Bremen coach Chris Burden shook his head in appreciation for the effort, knowing that offense comes and goes for everyone…but you can always win if you play good defense.

“They’re very long and athletic, and when you have that going you can take away and alter shots,” he said with a smile.  “Shots that are normally open aren’t there, and credit to them…they took us out of our game in the first half.  It got pretty ugly for a while offensively. 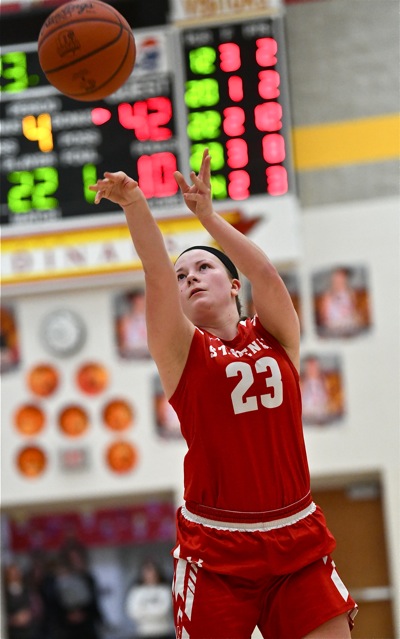 “But credit to our kids.  They hung in there and battled back in the second half.  It went back and forth for a while, but they made the plays down the stretch to get a good win for them.”

And besides the win, or loss, both coaches acknowledged that the experience of game where points came that hard will serve as a valuable experience for tougher games yet to come.  Both have yet to play defending champ Minster, who stock in trade just happens to be…defense!

“We play them the last game of the season,”  acknowledged Moorman, in reference to Minster. “It’s not going to easier and when you can get a quality win like this on the road it really means a lot.  We’ll play them at home on our senior night, and I would hope that we take something from this came as we play those tough teams left on our schedule.  We have nine games left, and with every one of them we’ll have to play that kind of defense.”

Chris Burden’s Cardinals are by no means diminished by their Thursday night experience, as he, too, will take that game as an example of his own tougher schedule yet to come.

“We have to come back and just play the way we’re accustomed to playing,” he added.  “They took some things away from us in the first half, but in the second half we began to move better, we got some steals, some easier buckets, and once we got some momentum things began to open up as far as our outside shooting.”

A revelation, perhaps.  But unfortunately for Bremen…it came sixteen minutes too late, and six points too short. 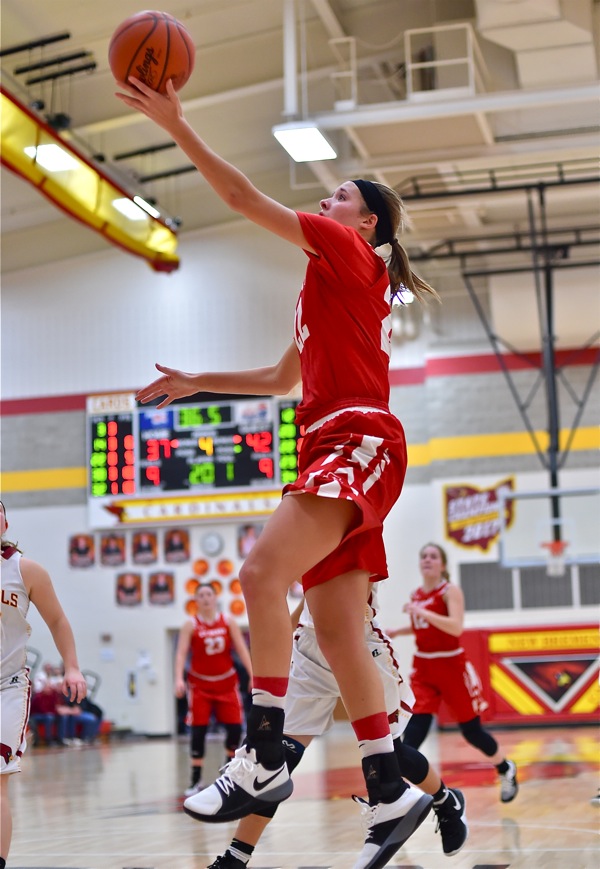