For sixteen minutes they played like the Duke Blue Devils.  Then, in a total change of course in the third period they played like your average devil.  In the end it amounted to another frustrating loss for the Troy Trojans.

Troy – An hour before tipoff Tuesday Troy coach Paul Bremigan and I had a wonderful visit in his office…exchanging holiday pleasantries, stories about Shelby County League basketball, where he coached for so long.

We talked about mutual friends up in Russia, and, well, you name it.  And as I got up to leave the room ‘Bremmie’ sent me on my way with this. “Write something good about us,”  he said with a chuckle.  And I assured him that I would look for the silver lining.

And for the first sixteen minutes of the Trojans’ game with the Fairborn Shyhawks (7-3) there was no issue with finding one.  Bremigan’s Trojans (4-6) played like the Duke Blue Devils – hustling, outworking Fairborn, scrapping on defense, and best of all…shooting 56% from the field.  Caleb Fogerty hit a pair of deep threes from the corner pocket and they were on their way to a 16-8 first quarter lead.

They kept it up in the second, climbing out to a 31-22 halftime lead while checking the ‘Hawks’ 24 points-per-game scorer, Shaunn Monroe, to just five first half points – all free throws.

But they must have gotten some bad water in the halftime locker room.  Or perhaps they just took one half of good basketball for granted.  Whatever, they promptly came out in the second half, have up 26 points in the third quarter, and eventually squandered their brilliant start by losing to Fairborn, 65-52.

“They shot better in the third quarter…he (Monroe) hit some shots from the corner and that hurt us.  When they’re doing that you’ve got to give up some stuff,”  said Bremigan.  “And he (Monroe) went to the line twelve times, and was eleven for twelve.  That was a big difference, that and our inability to be patient on offense and attack the rim like we did in the first half.” 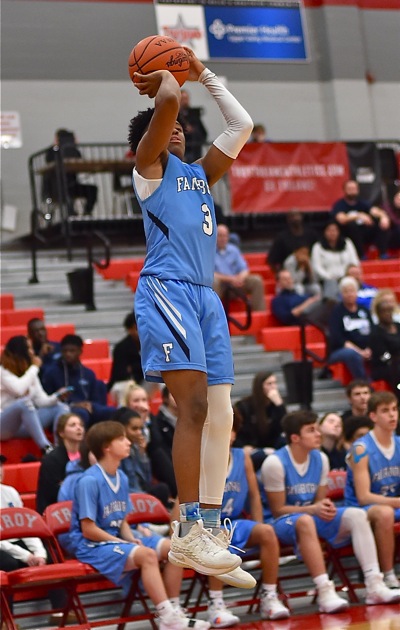 Shaunn Monroe, who had just five in the first half, exploded for 18 in the second and finished with 23 points.

The first half was nearly textbook.  After Fogerty hit his pair of threes, sophomore Shaedon Oldon returned to the lineup after his early-season hand injury and played up to his potential – slashing to the rim, scoring, and playing nuisance defense in the Fairborn backcourt.  But to illustrate Bremigan’s words, none of that was present in the second half as Olden failed to score;  and Fogerty would score only a harmless layup in the fourth, when the game was out of hand.

Tre’Vone Archie, who finished the first half with a 45-foot three-pointer from midcourt, would also disappear, and score just three free throws for the second half.  Caillou Monroe, who did score eight second half points, fouled the other Monroe (Shaunn) hard under the basket in the third quarter while the ‘Hawks were outscoring Troy 26-12, and that set off a pair of double technical fouls, a Fairborn player ejected for leaving the bench, and a general ‘chippiness’ between the two teams for the rest of the game.  The Trojans seemed to lose focus on basketball, and it cost them a ‘bad’ loss.

“I really don’t know what happened,”  said Bremigan.  “I had my back turned and when I looked around they were calling double technicals – kids running their mouths.  But to give up 26 points in the third quarter was ridiculous.  That was the game, right there.”

Well, yes, but to be specific…the things that Troy did so well in the first half they completely neglected in the third quarter – including help-side defense, boxing out under the boards, and closing out on Fairborn’s three-point shooters, Monroe, Joe Nickel (who hit four), and Dwight Lewis. 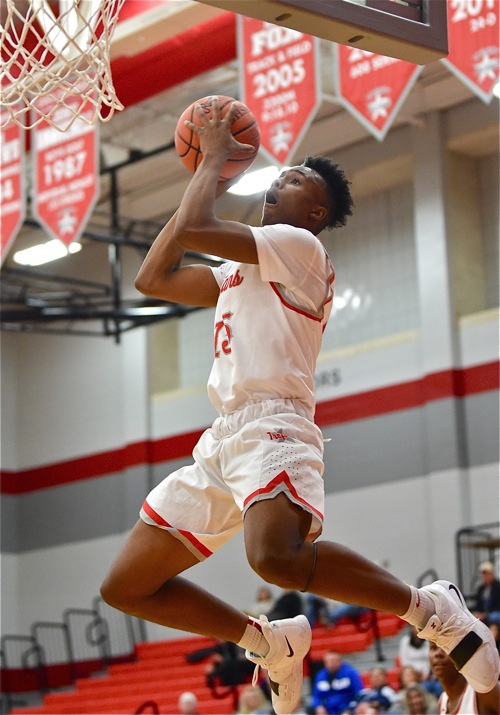 Troy’s Caillou Monroe hangs in the air before scoring two of his 8 second half points.

“We did a good job with those things in the first half,”  Bremigan said.  “But we need to do more to have an inside presence, and we don’t have much to begin with.  Then we work so hard to get it in there and just pass it back out.”

Shaunn Monroe, who had five in the first half, finished with a game-high 23 points.   Nickel, who hit the four second half threes, finished with 12.  O.J. Person, Tylen Eatmon, and Jarod Bodekor each finished with 5.

For Troy, their promising started ended with Tre’Vonne Archie scoring a team-high 12 points, while Olden had 9, Fogerty had 8, Jaden Owen had 7, Austin Stanaford had 4, and Andrew Holley and Sam Shaneyfelt had 2 each.

“We have a tendency to panic,”  concluded Bremigan before packing up to leave, whose Trojans are now 3-2 in the GWOC North.  They might want to work on that with successive road games coming up, against Stebbins and Belmont.  Because a week from Friday they have Trotwood coming in, who dropped 109 on Piqua the other night.

A team, by the way, that thrives on panicky opponents!