Ohio State Moves To 12-1 After Win Over High Point

The question remains.  Are the Buckeyes as good, as solid, as their record indicates.  Saturday’s 82-64 win over High Point gave hope that they are.

Columbus – The story goes that Ohio State became convinced that Luther Muhammad was a must-have recruit while scouting him for an 8 a.m. tip-off in an AAU summer league game before his senior year.

Muhammad was the only player on the court who was up and at them. He was hopped up to beat someone.

In basketball speak, that’s having a high motor.

Thirteen games into his freshman season, Muhammad is producing points, in-your-face defense and a relentless attitude no matter how weak an opponent might be and no matter the score.

Muhammad played like a turbocharged muscle car in totaling 17 points for a career high and helping hold High Point guard Jahaad Proctor to four points or 18.3 below his average in Ohio State’s 82-64 victory on Saturday afternoon in The Schott.

“It was just staying within the game and taking the right shots, doing what you do best and not trying to be something that you’re not,’’ he said.

“It was just staying disciplined, following the scouting report and not getting lackadaisical when my man doesn’t have the ball,’’ he said.

With him, though, it’s a lot more than numbers. In his first game he drew a technical foul for jabbering at a Cincinnati player after making a three-pointer. 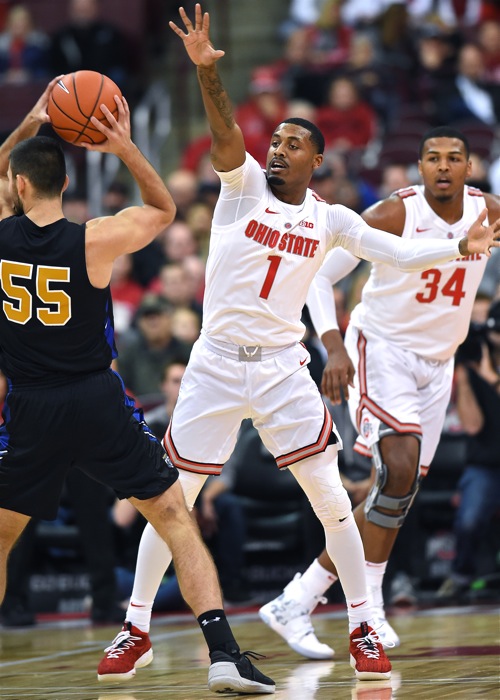 Muhammad is a dude with an attitude, and that’s not to say he’s a big mouth. He reeks with confidence and aggressiveness.

“He has been great – great,’’ coach Chris Holtmann said. “We needed his shot-making today and I thought he dug in defensively as well. Consistency has been a key, and that’s really hard for a freshman. He is probably going to hit a wall soon.’’

That wall probably will be mental and not physical. He missed one game after dislocating a shoulder against Syracuse and is averaging 28.7 minutes per game.

“The one thing about Luther that helps him right now it that he’s our most conditioned player and that’s typically atypical of a freshman,’’ Holtmann said. “One of the things with freshmen is that you are trying to get them to play harder than they have their entire life. Here you have a freshman who pretty much has led every sprint from day one. He has shown a consistency from conditioning on in practice to allow him to play at a pace he needs to be playing.’’

Junior guard-forward Andre Wesson is from the same school of hard play. He had two teeth knocked out and one broken falling face first against Bucknell on December 15.

“I’m good to go,’’ Wesson said. “It has happened before – it happened in high school. It wasn’t scary as much as it happened again.’’

There was more bloodshed during a recent practice when he got elbowed by 6-9, 270-pound brother Kaleb Wesson underneath the hoop.

“He got popped the other day by his brother,’’ Holtmann said. “He got stitches in one eye. It’s who Andre is. That’s who Kaleb is. They are natural physical players, and that’s what I like in a coach. I love that about those guys.’’

Kaleb led the Buckeyes as usual with 17 points on 7-for-12 shooting from the floor, four rebounds and three assists. Senior C.J. Jackson led with 20 points on 7 of 11 shooting in looking better and better splitting time at the point and playing off the ball.

Holtmann reiterated that the team wants to play through Kaleb Wesson.

What the second-year coach also desires is for his team to play with much more focus.

Yet again, Ohio State went into sleep mode after taking a 14-6 lead with 14:41 left on a trey by Muhammad.

Part of the problem, Holtmann said, was not having Kaleb Wesson on the floor for some of that time and maybe not having the right combination of players.

But there’s no question the Buckeyes failed to go in for the kill shot.

“It starts in practice to focus on sustaining that energy for the whole practice and carry it over to the game for the whole 40 minutes,’’ Andre Wesson said.

Ohio State (12-1) has finished with the junior varsity portion of its schedule with mid-majors such as High Point, Youngstown State, Cleveland State, South Carolina State and so on.

Next up are 18 straight games in the Big Ten, beginning with Michigan State on January 5 at home. Only the ACC can say that it is a better league.

“We feel good about it,’’ Andre Wesson said of conference play beginning. “Now, it’s the fun part, just playing in the Big Ten against other good teams.’’

Of course, Michigan State will wallop them if they dare take off minutes at a time. 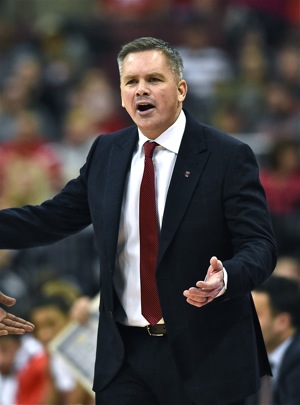 “We’ve got a long way to go,” says OSU coach Chris Holtmann.  “We’re going to go through some really difficult stuff in the Big Ten play.”

Ohio State didn’t take long to put away the game when it fell behind. Kaleb Wesson hit a three and Jackson a three-point play to start a 19-2 run. Muhammad ended the streak with a jumper in the lane and three-pointer from the top to make it 34-24 with 3:14 left in the half.

Holtmann sounded like a replay of so many of his press conferences in stressing that the players must sharpen their attention spans.

One reporter told Holtmann that he witnessed him slamming a fist on the scorer’s table three times in frustration.

“Our attention to detail has got to be better and that was probably some of the way I reacted the way we did,’’ he said. “We had a couple of defensive errors in scouting that can’t happen as we go forward. We’ve covered it day after day. Either we’re not making it clear enough or I’ve got to look to play somebody else.’’

The Buckeyes, Holtmann was told, seem to be playing only as hard as they must and that sometimes they appeareto be bored against lesser competition.

“I think there’s probably some truth to that, and it’s expected with a young team,’’ he said. “We have to get better in that area. There is no question that is a characteristic of this team. Our concentration area has to get better or we’re going to struggle in Big Ten play. We have to continue to play harder longer and to be more physical longer.’’