Joe Neves: This Week in Basketball

Holiday Tournaments dominate this week’s schedule…conference favorites are beginning to emerge as league play takes a break for the holiday…and we will check out the teams at the head of the pack one month into the season.

Welcome to This week in Basketball,Volume 4..sponsored, as usual..by the Buschur Home Improvement Company and Richard Perkins, of Dayton.

It’s Christmas week, which means more practice than games for most teams. Everyone takes Monday and Tuesday off, and there are just a couple of games on Wednesday. Girls action picks back up on Thursday, but most of the boys teams wait until Friday to return to the hardwood.

Conference action takes the holiday off as well, with holiday tournaments popping up all over the area this week. Piqua, Lehman, Bethel and Troy Christian make up the field for the Buckeye Insurance Group Holiday Classic Thursday and Friday at Piqua’s Garbry gym. Franklin Monroe hosts the long running Jet Holiday tournament on Friday and Saturday, while Coldwater hosts the Asset Allocation Holiday Classic Friday and Saturday. St. Henry, Celina and Defending D-IV champion Marion Local make up an intriguing fields there. 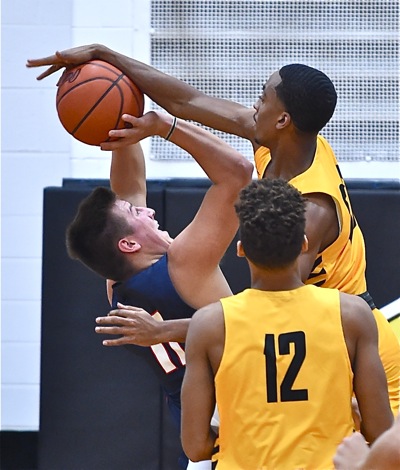 Simply put, Sidney has proven it can beat teams at both ends of the court, and hold a 7-1 record at the holidays.

On the boys side, the Anna Rockets hit the holiday week on a high. The Rockets have rolled over their first 7 opponents, averaging 76 points per game,with an average winning margin of 35 points. Nate Barhorst’s Rockets are experienced, talented and deep, and playing with a lot of confidence. Anna has a one game lead in the Shelby County League, and will host the defensive minded Fort Loramie Redskins (3-2) Friday night.

The Sidney Yellow Jackets are 7-1 at Christmas, and have an interesting matchup Saturday night at home against Wayne. Andre Gordon continues to be the most entertaining player on the floor for Sidney, but pay too much attention to him, and Ratez Roberts, Kevin Lee and Darren Taborn can do damage. All three had big moments in the Jackets big come- from-behind road win over Butler last week.

The Aviators, meanwhile, are 7-1 and play at Valley View Friday night.

To the surprise of absolutely no one, the Midwest Athletic Conference race appears to be wide open. Delphos St John’s had it’s season-opening 6 game winning streak snapped in Ottoville Saturday night, while St Henry (4-1), Marion Local (2-1) and New Bremen (2-3) all won their conference openers. The feature game when conference play resumes January 4th sends St Henry to Marion Local. Those teams could meet Saturday night in the final round of the Coldwater tournament.

Speaking of wide open…no fewer than five teams have one loss atop the Cross County Conference. National Trail has the best overall record at 6-2, but both losses have come in league play. Keep your eye on the Miami East Vikings–Allen Mack’s team has won four straight after an 0-4 start. The Vikes have a double weekend at home, welcoming Versailles on Friday and Yellow Springs on Saturday. 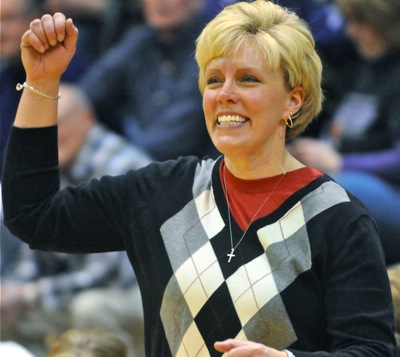 Reason To Smile…Loramie’s Carla Siegel has the Redskins off to a 7-1 start, and handed Versailles a surprising loss last week.

On the girls side–the team of the week was undoubtedly the Fort Loramie Lady Redskins. The Redskins are 7-1 after lopsided wins over 6-2 New Bremen and previously unbeaten Versailles, and the Redskins do not get a holiday break. They host 6-2 New Knoxville Thursday night, and face traditional power Sugarcreek Garaway at Ohio Dominican Friday. All of that will prepare Loramie for the first SCL showdown of the year January 3rd at Anna.

It’s been a pretty good year to be a basketball fan in Anna–the boys and girls teams are a combined 14-1. The Lady Rockets travel to 8-1 Versailles Thursday night, then host the red hot Miami East Vikings on Saturday. Jeff Maurer’s team makes it very difficult to score, as they allow just 31 points a game. That defensive average will get a test this week.

The Lady Tigers of Versailles figure to be in a foul mood when the Rockets get to town Thursday night. Their 56-33 loss to Loramie was one of the worst in recent memory, and snapped the Tigers 8 game winning streak. Versailles maintains a half game lead in conference play over Minster and New Bremen.

Minster dismantled Russia in its first game in nine days Saturday, and is now the only unbeaten team in the conference at 8-0. The Wildcats will be well rested when they face Bellevue Friday in the McDonalds Holiday Classic. 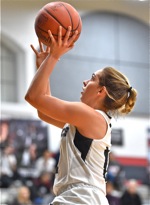 Covington’s Sammi Whiteman has the Buccs off to a one-loss start to begin the new year.

The race is already over in the GWOC North. Tippecanoe has won 6 straight and enjoys a three game lead over the rest of the division. The 7-1 Red Devils travel to Fairmont Saturday for their only action of the week.

Quietly, the Cross County Conference race has developed into a two team scramble. Covington is 8-1 and has won 5 straight, while Miami East is 8-2 and has won 4 straight. The Buccs only loss was a blowout to Versailles, while the Vikings took the Tigers down to the wire before losing by 4.

Covington meets Graham in the first round of its own holiday tournament Friday, while East has a conference date at 5-3 Franklin Monroe Thursday night before taking that trip to Anna Saturday. The Vikings and Buccaneers will meet for the only time this season January 31st at Covington.

Finally, we don’t talk a lot about the Metro Buckeye Conference, but the Troy Christian Lady Eagles have put together a 7-1 start with one of the areas youngest rosters. Sarah Johnson, a 6-1 freshman, and Erin Shenk, a 5-5 sophomore, lead the Eagles in scoring, and their only loss was 46-43 to Covington a couple of weeks ago. The level of competition is always an issue in the Metro, but the Eagles will be tested in the second half of the schedule. They have two meetings with conference foe Legacy Christian (9-1), and have home dates with Franklin Monroe and Chaminade Julienne. Keep an eye on this young team as the season progresses.

That’s it for this week. Merry Christmas, and we look forward to seeing you at the gym! 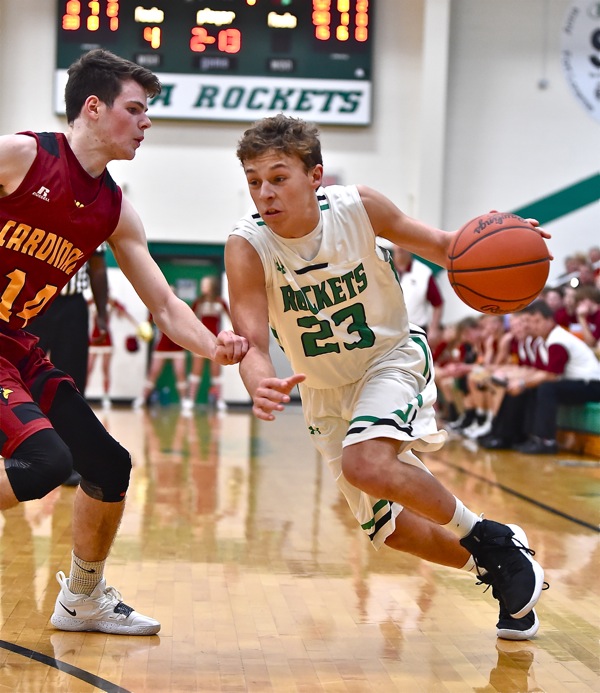 In boys basketball, Anna has run past everyone, averaging 75 points a game, in cruising to a 7-0 start. (Press Pros File Photos)