A Work In Progress: Marion ‘Eases’ Past Versailles

At times they played as to give reminder that they are the defending champions.  And at others Marion Local simply looked like a team that’s going to be a lot better in a month.  It was enough for a win over Versailles.

Versailles – Give Versailles coach Travis Swank, and give the Versailles Tigers a lot of credit.  They could have gotten thumped Friday night by the state defending champions on Division IV.  But it didn’t happen…because Swank and the Tigers wouldn’t let it happen.

Clearly outsized, and lacking that certain champions’ confidence that teams like Marion can bring, Swank’s Tigers played hard, played smart for the most part, and bought into the fact that they knew they had another, different tiger by the tail.  And yet, it didn’t make any difference.  Marion Local ultimately won the game, 53-42.

“I was happy with the effort tonight and I think we won some people over with how hard we played,”  said Swank, post-game.  “They’re a very dynamic team with a lot of athletes and we had to muddy the water a bit – slow things down.  But the kids worked hard, we just couldn’t put the ball in the basket enough.”

Versailles scored the game’s first four points and led midway through the first quarter 5-1…so yeah, they slowed things down a bit.

But Marion’s size, and athletic ability took over at the five minute mark and the Flyers eased out to a 15-8 lead by the end of the quarter;  then extended that lead in the second quarter with the kind of defense for which there is no answer.  Versailles got the ball to the paint a few times, but they couldn’t get the ball to the rim.  Nate Bruns (6’6″), Nick Tangeman (6’4″), and Sam Huelsman (6’3″) made it a habit of getting in the way, and rejected a few shots.  Marion won the second quarter 13-6 and led at the break by 14…28-14.  It could have been more, and Marion coach Kurt Goettemoeller knew it.

“I have a lot of respect for them (Versailles),” said Goettemoeller, afterwards.  “I’ve scouted them three times and I’m impressed with how they’ve gotten better each week…how they play hard and how they’ll run possessions offensively that make you sit down and guard for thirty and forty seconds at a time.  And that’s hard, especially when you’re not in basketball shape yet.” 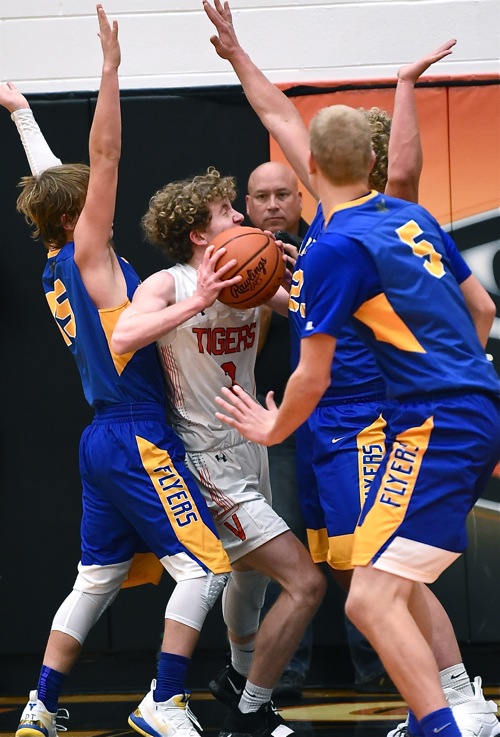 Tough defense…Versailles’ Nate Johnson found himself surrounded by a trio of Marion defenders, and the Versailles Policy’s Scott Langston.

And that’s exactly what Versailles did, patient with the ball on offense, moving it side to side until they could get the look they wanted.  Plus, it was a physical game – the refs really didn’t cal much, which kept Marion from getting to the foul line as often as a bigger, more physical team could have done.

And then, to Goettemoeller’s point…there is the obvious issue of Marion (2-0) having played just two games, while Versailles (3-4) has been out there for a month already.

“We would have liked to have saved some legs for tomorrow night (Lima Shawnee), obviously,”  added Goettemoeller.  “But they made us work.”

Without a doubt Versailles won some souls over in the third quarter, when they cut Marion’s advantage to eleven points (42-31), and played them to a virtual 12-10 standoff for eight minutes.  They didn’t score a lot, but they didn’t give up a lot – Kody Naftzger, Nate Johnson and Mike Stammen accounting for Versailles’ four buckets in the quarter.

And they actually outscored Marion by an 18-13 margin in the fourth quarter, a lot of those points coming from the foul line (7) and a Naftzer three-pointer, the Tigers’ only make from behind the arc for the game.

But for the fact of Nate Bruns (game-high 18 points) and Nick Tangeman (12 points), the game and the Flyers were never really in jeopardy.  And added, they had plenty of complementing scoring from Sam Huelsman (8) and Max Albers (9).  Those four accounted for 47 of Marion’s 53 points, and while not as efficient as they will be in a month, the Flyers were talented enough to slip to a win without firing on all cylinders. 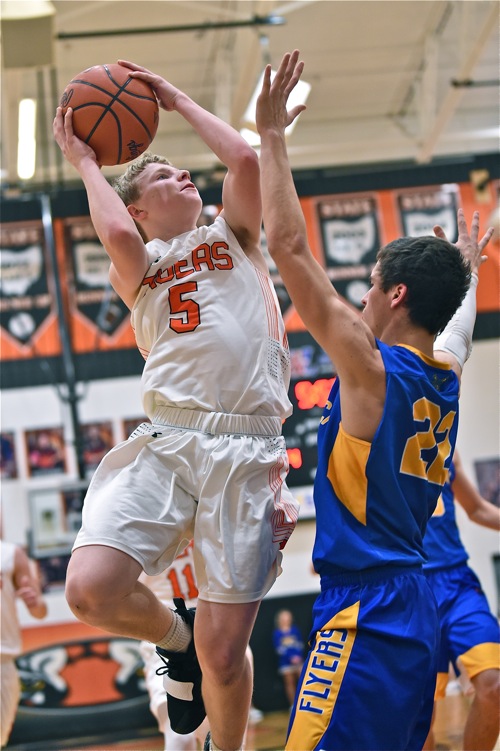 The Tigers’ Michael Stammen drives to the rim for a pair of his twelve points.

“For one we need to do a better job of screening, and knowing when to screen,”  said Goettemoeller.  “And that only comes by practice and playing.  We played so well offensively in our first game (against Celina) that I knew it wouldn’t continue, and hopefully we’ll get to that point again.  We didn’t play very well offensively tonight, but Versailles deserves some credit for that, too.

“I told the guys…when you go on the road in this league you expect to battle, regardless of who you play,”  Goettemoeller continued.  “I’ve seen Versailles get down to Chaminade by 15 and then get it back down to six points, so they play hard to the very end.  When you can get a road win here you just take it and move on – learn from it and try to get better.”

Marion shot 43% from the floor and hit five three-pointers (two each by Bruns and Max Albers) in 13 chances.

For Versailles, the Tigers shot 39% for the game, led by Naftzger’s 13 points, while Michael Stammen and Evan Hiestand each finished with 12. 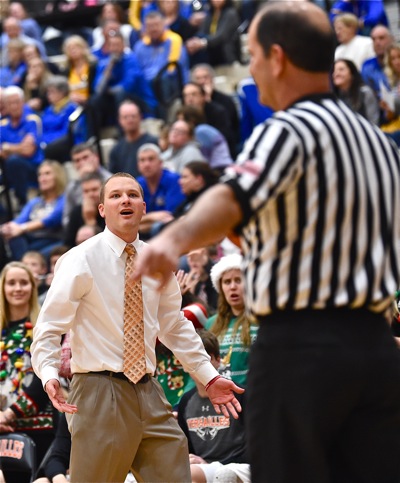 No caption necessary, is there? Versailles coach Travis Swank and the officials.

It was obvious that Marion was far from being ready for prime time, and Goettemoeller knows that first and foremost, admitting that improvement will come a step at a time – time being the operative word.

“We’ve got to become more fluid offensively, and you have to play to get that,”  he emphasized as he readied to leave the building Friday.  “And defensively, I thought we played hard and did a pretty good job tonight, but there were times when they ran plays for forty seconds and we didn’t finish the possession with a rotation or defensive rebound.  But I can’t complain, because I know we played hard.”

“We could have lost by more tonight,”  Travis Swank concluded with a nod.  “But our kids never rolled over, they continued to fight and I liked that.  We just couldn’t put it in the basket.  Plus, they’re very good with a player like Bruns coming back and they have a lot of players around him that do their roles very well.  They’re going to give a lot of teams fits.”

Translation:  The more you play the better you play, all things being proportional.  And Marion, in a month, is going to be a handful. 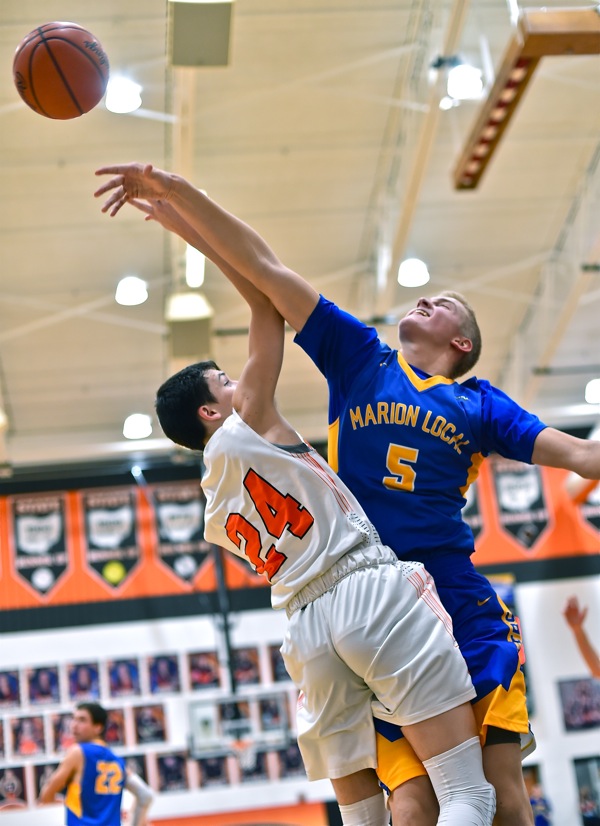 And some of this, too...Besides his 18 points, Marion's Nathan Bruns was a defensive force at the rim, swatting the shot attempt of Versailles' Kody Naftzger. (Press Pros Feature Photos by Sonny Fulks)