Sidney scored more points in the final 7 minutes than it did in the first 29, erasing an 11 point deficit in the final 3 minutes of regulation and going on to stun previously unbeaten Vandalia Butler on the Aviators home floor.

Vandalia – The Sidney-Vandalia Butler rivalry has become one of the best in the Greater Western Ohio Conference the past two seasons, and the only one that really matters in the GWOC North.

Last season, the two combined for 37 wins and shared the GWOC North crown, each winning in the others gym in tense, hard-fought contests.

They added another chapter Tuesday night, one fans will be talking about for some time.

Butler entered the game 6-0 with the league’s best defense, allowing 41.7 points per game. Sidney brought a 4-1 record to the Student Activity Center, and the conference’s second best offense at 65.2 points per game. 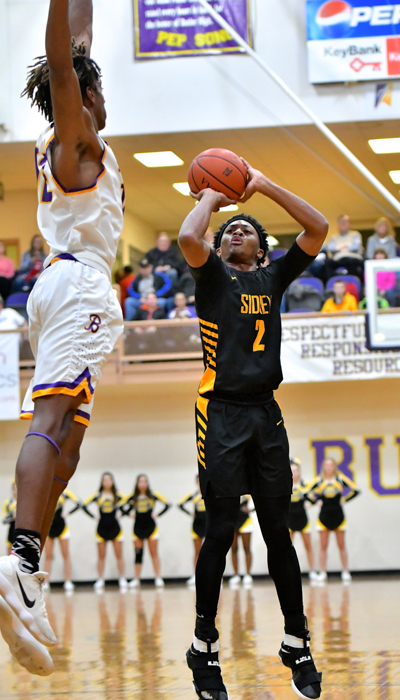 Ratez Roberts launches a jumper for two of his season-high 16 points.

For 3 and a half quarters, defense won. Butler held the Yellow Jackets to 6 points in the first THIRTEEN minutes of the second half, and held a seeming insurmountable 35-24 lead with three minutes to play.

Led by seniors Ratez Roberts and Andre Gordon, the Jackets went on an 11-6 run, but still trailed by 6 with a minute to play. Darren Taborn buried a three from the left wing to make it 41-38 with 43 seconds left, and the obviously rattled Aviators turned the ball over while in-bounding.

Roberts then got loose underneath and was fouled while scoring…his free throw tied the game at 41 with 36 seconds to play. Butler had time to set up a final shot, but it bounced off the iron, sending the game to overtime.

Sidney took control immediately in the extra session. Keith Lee hit a three to give the Jackets the lead for good, and Gordon followed with a thunderous slam to make it 46-41. Although there were still 2 And half minutes to play, the Aviators were done, and Sidney closed out 51-46 win to take over the top spot in the GWOC North.

“This feels good,” said a smiling Sidney coach John Willoughby. “Butler is a great team and they know how to play. We really haven’t played well for an entire game, and we knew we would have to tonight. It didn’t look good, did it? But our guys kept working and it’s good to know we can play a game like this and get a win.”

“I don’t even know,” Gordon said, shaking his head outside the locker room when asked how the Jackets pulled off the improbable win. “We didn’t quit, we never gave up, everybody was hustling and giving it everything we had. That’s how we got the W.”

“Bunkers” is proud to sponsor coverage of GWOC basketball on staging.pressprosmagazine.com.

Sidney took an 18-15 lead to the locker room, but the third quarter was a disaster for the Jackets. Bryant Johnson and Quentin Glover both had 5 points in the period for the Aviators, and Sidney went 1 of ten from the floor.

When the 6-5 Johnson hit a two-handed slam off the left baseline to open the fourth quarter, but had a 7 point lead that would grow to 11 with 3 minutes left. That is when the Yellow Jackets finally woke up. 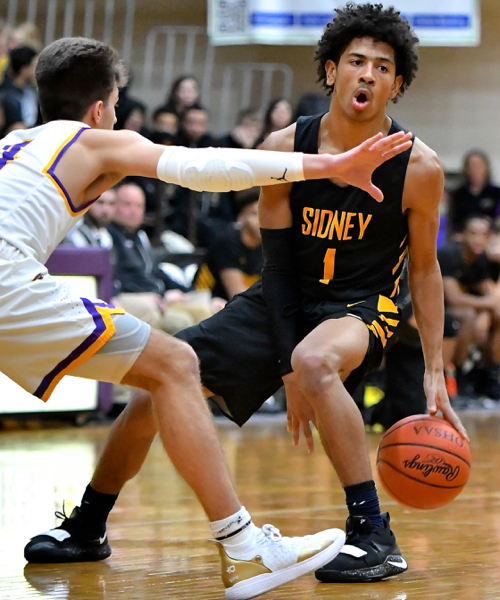 ‘Jackets’ Dominick Durr shows some ball handling against the Aviators.

“Sometimes Andre distributes the ball a little too much for my liking,” Willoughby continued. “He can get his shot any time he wants it. But he knows when to pick it up too. Taborn hit that big three for us, and man did Ratez (Roberts) play well.

“I don’t know what happened in the third quarter. We seemed to lose our focus. But we knew this game would be a grind. We coach and practice so we can play any style. When things weren’t going our way, no one panicked or tried to do too much. When we finally got tempo going our way, that’s what turned the game.”

“I just knew we had to pick it up in the fourth quarter,” said the well-spoken Roberts. “We were down almost the whole second half, and we knew that we had to turn it on. “Dre and I knew we had to get things going for our team so we could come back and force overtime and get the win.”

Dave Arbogast is proud to sponsor coverage of GWOC basketball on staging.pressprosmagazine.com

Meanwhile, Butler didn’t score in the final minute of regulation or the first two minutes of overtime, and the Jackets 11-0 run during that span handed the Aviators their first loss of the season.

Gordon finished with 18 for Sidney, just under his 21.6 average coming in, while Roberts doubled his season average with 16. He was also a force on the defensive end with several blocks. Lee and Taborn both finished with 6, but their three pointers late gave the Jackets the boost they needed down the stretch. 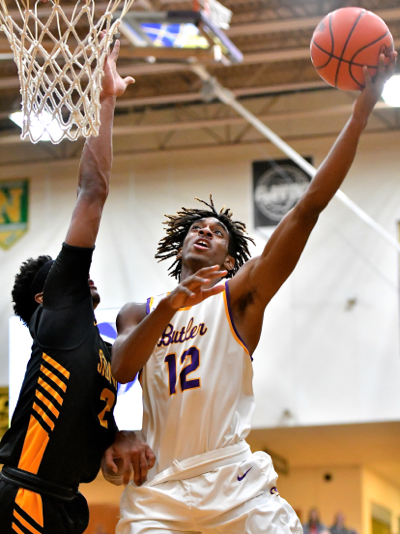 “I just had to keep playing with confidence,” Gordon said. “Get the ball to my teammates if my shot wasn’t falling. We had guys get open and hit some big shots. That’s my role and I have to play it until my shots come.”

For the Aviators, Michael Kreill and Johnson each had 12, and Glover added nine, all in the second half.

Butler out-rebounded the Jackets 29-26, but Sidney had the edge on the offensive glass 9-7. Sidney had 8 turnovers on the night, while Butler had 12, including 9 in the second half.

“We are defending a championship, just like Butler is defending a championship,” Willoughby said. “We have a lot of guys back and we expect to be in games like this. We knew the division would probably come down to this game and the next one (the rematch is February 12th at Sidney). What it says to this team is that we can play in these kind of games and be successful.”

“This is really big for us,” Roberts concluded. “They are for sure our biggest rival in the GWOC, and to come out and get this win in their building is a huge step. This shows that when we play to our full potential we can come out and play and beat anybody.” 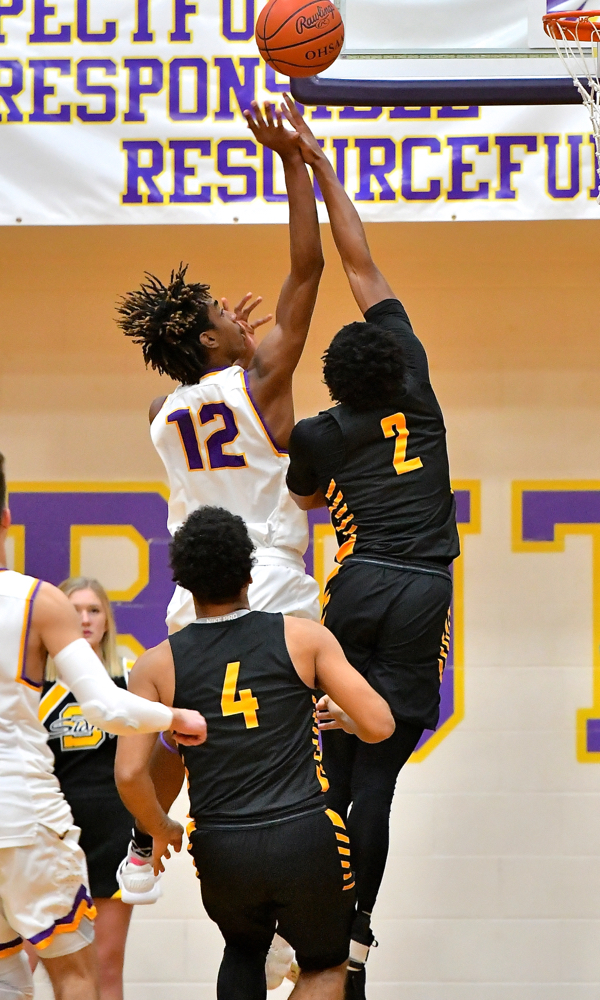 Sidney’s Ratez Roberts had his best game of the season at both ends of the court – challenges the shot of Butler’s Bryant Johnson. 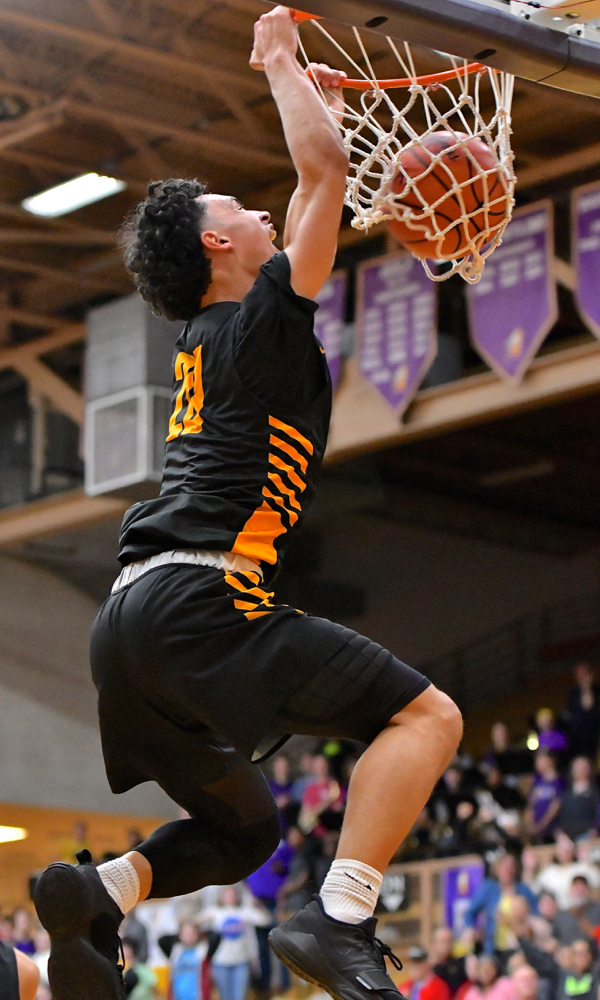