What Does Your Christmas Card Say…About You?

If you ever think about it, the cards you send to others in the spirit of the holiday say a lot about what you really appreciate, not only about the season, but about what you might take for granted.

Like you, I’m receiving Christmas cards this week.  Not so many of the traditional kind…not anymore.  Now there are fewer cards in the US Mail and more sent by email, and of course most are wishes of holiday cheer accompanied by a photo of family, or a scene that connotes the spirit of the season – tranquility, or something that’s personally meaningful.

Most are the traditional type, of course.  There’s photos of farm buildings, wildlife, and the ubiquitous evergreen tree.  But times are a changin’ and a friend in Minnesota shared this snark comment on modern culture, with an ‘LOL’:  “I hope there’s nothing politically offensive about our card.”

You can’t be too careful nowadays, you know.  And to that end I’ll share that following last month’s post on Gettysburg, Pennsylvania, and that community’s annual ‘Remembrance Weekend’ celebration of history, that there were a few comments received here that left no doubt that remembering the Civil War is politically offensive to some of us.  We shared one of them in last week’s ‘Reader Speaks’ post.

So I’m taking this opportunity to share something about what Christmas greetings say about you and me – appreciation for the things that we should value as responsible, thoughtful adults.  Because that’s what the season is supposed to be about, isn’t it – peace and goodwill towards each other?

Like some of you, what I appreciate most about the symbolism of Christmas is the sacrifice that one man – a man Heaven-sent – made for the sake of all that believe in Him might have everlasting life.  And traditionally, many of the old Christmas cards that your and my parents received included that message.  Not so much, anymore, because now that message might be construed as ‘offensive’.

I’m sending a few email greetings of my own for the holiday, as I’ve done in the past, with a different message of peace on earth to my ever-decreasing list of friends (time has a way to making the list smaller, you know).  And this year I’m sending my own image of places that symbolize sacrifice, and the earthly reminder that our way of life was long ago purchased by those who made another, different, payment forward.

Some of those responses I read from those responding to Gettysburg were not very nice.  I won’t share them with you here, because they represent the sentiments of people who simply don’t appreciate sacrifice from the past, and its relevance to the present.  While you can make the claim that the Civil War is an ugly reminder of slavery in the 19th century…the glass is certainly half full for the fact of how far we’ve come since then.  We’re not perfect, of course.  But mankind has never been perfect;  nor will it ever be.  Hence, that’s the reason for the season, as they say. 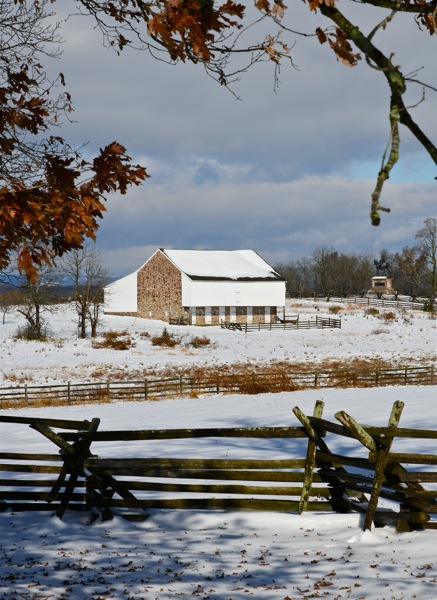 Time heals all wounds…especially when you consider the modern scene of a battlefield where such human carnage once occurred.

No, the scenes that I’m sharing this Christmas are just favorite vistas from the great battlefield that’s been so much a reminder for many…and part of our understanding about how we’ve come to be what we are now, individually and collectively.  They’re pretty, yes.  But that beauty is tempered with an appreciation of what once happened there.  As I shared with my friend in Minnesota, the same appreciation that I take from traditional Christmas cards is with me every time I walk a battlefield, regardless of season.  Someone paid a price!

The Gettysburg scene of the McPherson barn on the right represents a building where wounded from both sides were taken on the battle’s first day, cared for, and sadly many died in that building.  The original structure burned long ago, but the rebuilt copy serves just fine and punctuates the beauty of the landscape.

The rising sun over a wintry, icy Plum Run Valley (top of page), to me, represents the new beginning that each of us enjoy every day.  No matter how bad something was yesterday, doesn’t the sun always come up tomorrow?

Of course, there is a place for Christmas lights, and over-indulgence, too.  And to those who have grown up with that symbolism of the season, it’s fine.  Like the woman wrote in ‘Reader Speaks’, “different strokes for different folks”.  Besides, which of us doesn’t like a little light show and fireworks on special occasions?

But left to reflect, Christmas lights are a purchase that can be made over and over again.  They wear out, they’re discarded, and replaced.  You can’t say that about my symbolism for the season.  You cannot discard the realization and memory of what once took place in Bethlehem, or even Gettysburg.  And if you can, perhaps you really have stared at the lights too long.

Merry Christmas, everyone.  And I hope that’s not offensive to some of you (LOL).  And if it is, Happy Holidays, Kwanzaa, or even Festivus…(for the rest of us)! 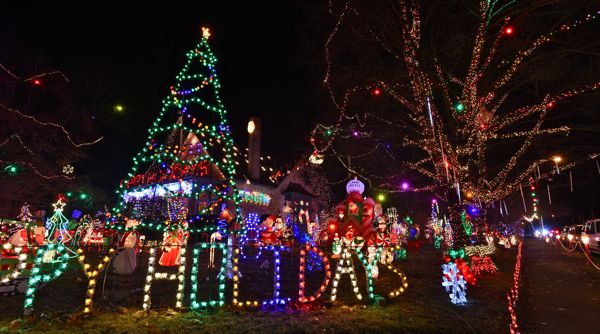 Different Strokes…Tis’ the season at this house, with DP&L crews standing by, just in cast. 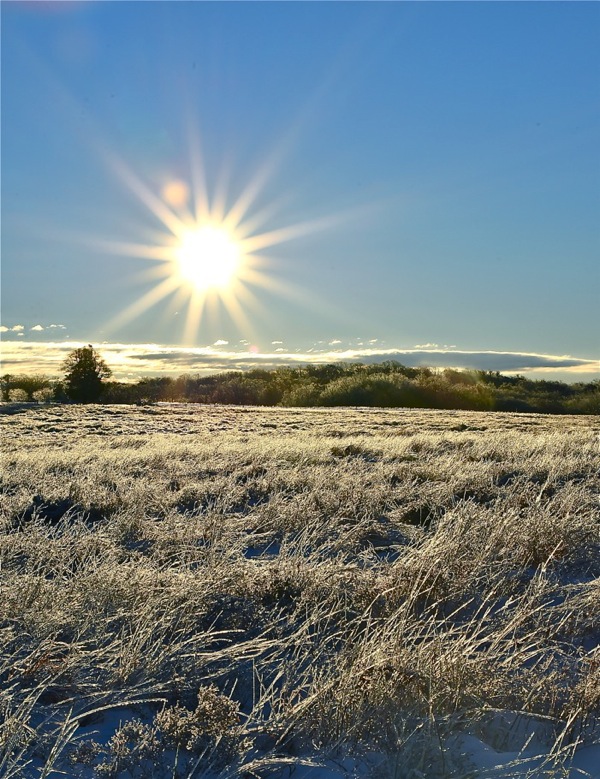