Sidney held Troy to just five field goals in the first half, then held on as Troy challenged in the third quarter.  Not the prettiest, but the ‘Jackets took it anyway in a Friday GWOC win over Troy.

Troy – He’s not sayin’ so in as many words, but Christmas came early this year for Sidney basketball coach John Willoughby.  Like on the first day of fall practice when star guard Andre Gordon called him from Huntington, West Virginia (he had transferred to Huntington Prep over the summer) and asked, “If I wanted to come back to Sidney would I be eligible?”

“I told him I’d let him know in ten minutes,”  said Willoughby following Friday’s 67-48 win over Troy in GWOC North action at the Trojan Activity Center.  “Then Andre told me he’d think about it over the weekend and call me on Monday, and at 4 pm on Monday he called and said he was coming back to Sidney.”

Well, Gordon, a commit to play at Virginia Tech next fall, didn’t have his best game, or even his typical game on Friday.  But he did enough offensively (15 points), and enough in terms of distributing the basketball that Sidney finished with ten different players in the scoring column and senior Josiah Hudgins finished with a career-high 23 points on 9 of 12 from the field…and 5 of 8 from three-point range.

“I just wanted to play team ball tonight because I knew I was going to see box-and-one,”  said Gordon afterwards.  “I wanted to get my teammates involved and find the open man.  Josiah had his first 20-point game this year, and our defense wore ’em down in the first half ’cause we have people that can come in the game and keep up the pressure.”

Defense, indeed, was Sidney’s early trump, doing what they do best – running, pressure, points off turnovers, and holding Troy to just one point until the 26-second mark of the first quarter.  The Trojan couldn’t buy a bucket and missed in every conceivable way – layups, jump shots, stick-backs and even free throws.  Junior guard Brayden Siler finally broke the ice with a three-pointer from the wing with 26 seconds left, but Troy was in a deep hole, 16-4. 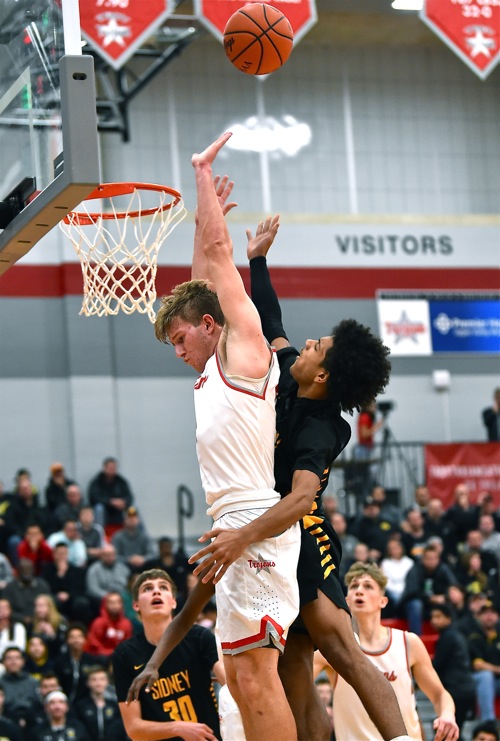 It didn’t get a lot better in the second, while they did score another eleven points.  But while Troy defended Gordon like the U.S. southern border, Josiah Hudgins was having his own way, with 13 points and a trio of made three-pointers.  Sidney finished the half with commanding 16 point lead, 31-15.

“I thought our kids battled,”  said Troy coach Paul Bremigan.  “But when you get down 16-1…and then we stayed on 6 for a long time in the second quarter…it’s hard to come back from that and win.  But we had some kids that played their second varsity game and one kid played his first.  I think we were 4 for 24 or something like that, and you combine that with 11 turnovers and 10 offensive rebounds you feel lucky if you’re only down 16 points.”

The beautiful thing about high school basketball is…that when your team’s not playing well you can heckle the other team’s best player if he’s not playing well.  And the Troy student section, at one point, started that wonderful, age-old chant, “Over-rated, over-rated”, as Andre Gordon struggled to hit shots from the perimeter.

The other beautiful thing about high school basketball –  is the fortunes of the game can change on a dime;  and they did for Troy in the third quarter as the Trojans did indeed battle their way back into contention…as Sidney did what Sidney sometimes does.  They kind of lost their way.  Caleb Fogerty hit a pair of threes for Troy, and Tre’von Archie canned another, they got to the line and made some free throws, and actually played Sidney to within a point for the third quarter (18-17). 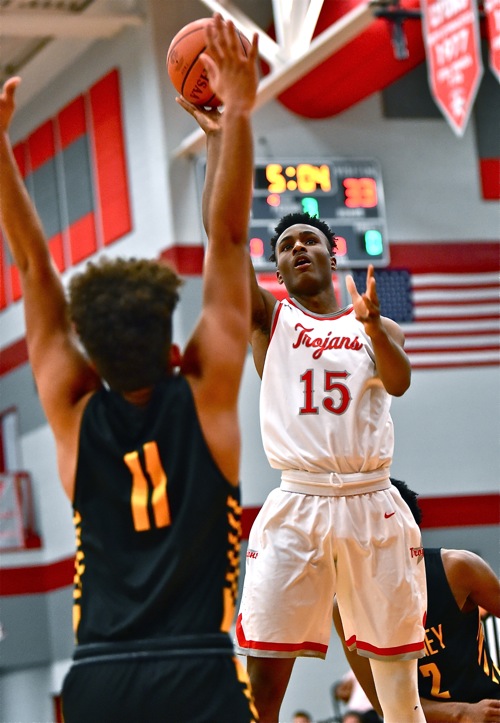 Troy’s Caillou Monroe hits a floater from the lane during the Trojans’ third quarter comeback try.

But it was too little, and too late, and oh, by the way…Andre Gordon did find his ‘mojo’.  He finally connected on a three-pointer from the top of the key to open the fourth quarter, hit three of four shots over his final five minutes, and punctuated his night with a thunderous dunk off a Troy turnover in the open court that peeled paint from the rim.  Then, as he ran back up the floor he turned to his hecklers and gave them the ‘shoosh’ sign.  Basketball IS a beautiful game.

“The way we played, our run and jump in the first half…I could sell that to a lot of high school coaches,” said a pleased Willoughby after the game.  “Except for the last two minutes of the half when we kinda’ lost our heads, I was very pleased with how we played.  I think our defense wore them down, got ’em tired there towards the end of the half, and that’s what we want to do.  Although, I don’t think we took advantage of the last two minutes like we could have.

“In the second half we kind of went through the motions in the third quarter and we got a little sloppy, but Josiah had a heckuva’ game and he seems to like this gym.  Nobody else does, but he seems to play well here.”

They’re athletic, unlike anyone else in the GWOC North.  Their ability to run people at you on defense is their hammer if they can find the discipline to do it.  Not tall, Sidney seems to have one player after another who can create pressure, disrupt, and beat opposing teams to loose balls on the court.

“I thought we were a good defensive team midway through last season,”  added Willoughby.  “This year we’re trying to extend that more because of how many kids we have that can play.  But we kind of lost our excitement about doing it tonight once we got up with the big lead.  We just don’t have that mindset yet where we want to pound it all the way through.  We have to find a way to do that.” 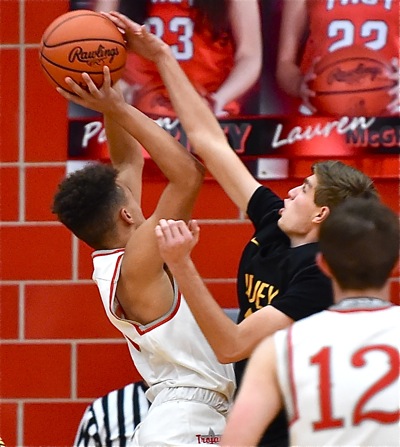 Sidney’s athleticism and depth made it tough for Troy to score early…just one field goal in the first quarter.

But they are 3-1 so far, as Troy dropped to 1-1…and Paul Bremigan can at least claim that Rome wasn’t built in a day.  They had eight different kids that scored, led by Tre’Vone Archie’s 13 points and Caleb Fogerty’s 10.  And an added bonus – they had a ‘GREAT’ crowd, as both sides of the Trojan Activity Center was nearly full.

Hudgins led Sidney with 23, of course, followed by Gordon’s 15, and players too many to name with 5 and 6 points apiece.

Gordon admitted that he couldn’t be happier to be home, playing with his buddies, and providing his experience and leadership to all those who can, and will, play this winter for Sidney.

“It feels great,”  he said before boarding the bus, smiling broadly (you won’t find a nicer kid).

“It feels great to play with my best friends and I’ve been playing with them since fourth grade.  We’re winning, we’re 3-1 now, and it feels good.  No regrets.”

And his impact was apparent, even while he didn’t play well in Friday’s first half.  Sidney was still good because of their defense.  They got better because Josiah Hudgins scored 23 points.

But the best…is having Andre Gordon back doing what Sidney does when Sidney’s at its best.  They can score points in bunches before you know what hits you – a pretty nice package under John Willoughby’s tree. 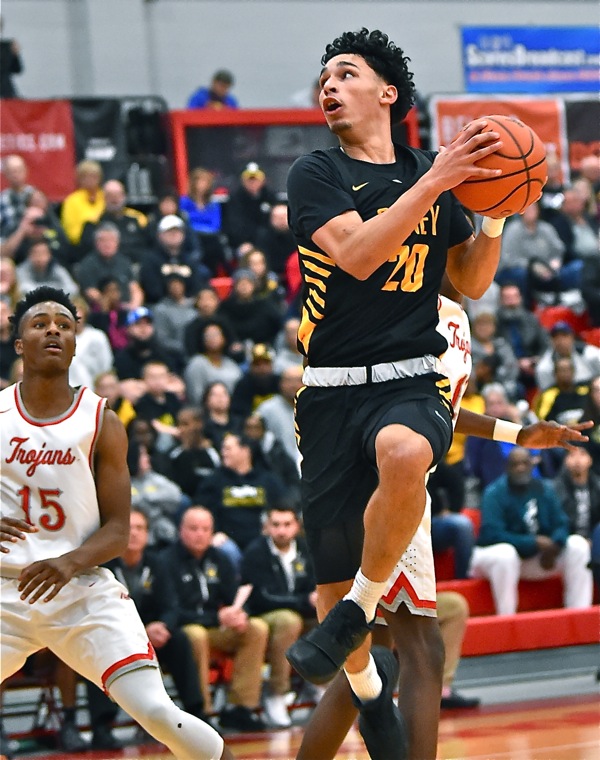 ‘Not’ over-rated…Sidney’s Andre Gordon hit three of four second half shot attempts to finish with 15 points. 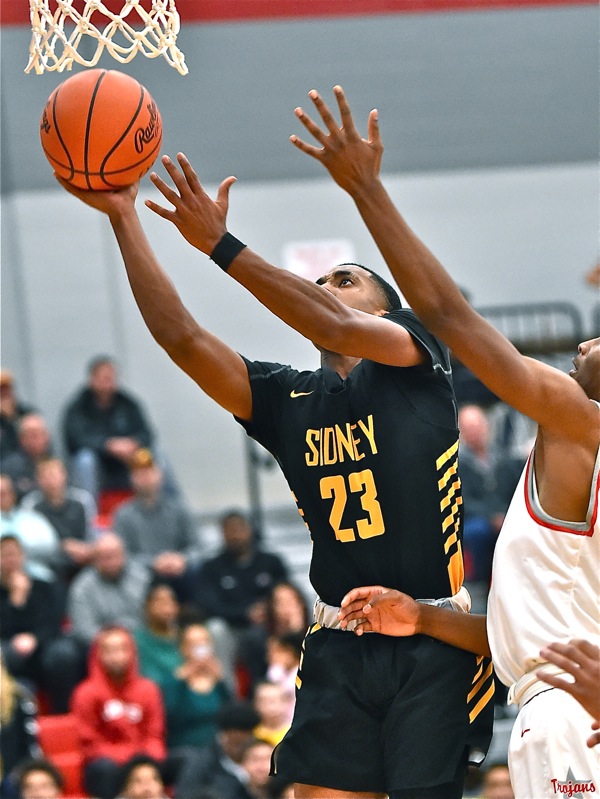 Senior Josiah Hudgins was the beneficiary of Troy's added attention paid to Andre Gordon. He finished with a game-high 23 points in the 'Jackets' win. (Press Pros Feature Photo by Sonny Fulks)