Our Coach Of The Year In Area Volleyball…Kenzie Bruggeman

To answer the rhetorical question, “What next?”, after she won the 2017 Division III title, Versailles’ Kenzie Bruggeman followed that by doubling up in 2018, proving beyond a shadow of a doubt that her skills as a coach and system builder are no fluke.

If you followed the narrative throughout the 2018 volleyball season there were multiple candidates for such a subjective comment…that so-and-so is deserving of being singled out as ‘Coach of The Year”.

But in the end only one, Versailles’ Kenzie Bruggeman, made the subjective more concrete – in fact, objective – as she guided the Tigers to their second consecutive Division III OHSAA title in volleyball.

And, she did it with a dramatic flair that proved beyond any doubt that a few obstacles could not stand in her way.

She overcame graduation losses to a pair of key contributors to the Tigers’ 2017 title – two confirmed ‘winners’, in front row stalwart Danielle Winner, and back row standout Kami McEldowney.

She actually overcame an under-achieving start, at one point losing three of four matches mid-season, and stood 10-10 before going on an unpredictable 10-game win streak to finish the year 20-10, and state’s champion.

But more, she never lost faith in the girls she coached, telling anyone willing to believe when they were 10-10 that they were capable of going back to the state tournament, and capable of winning.

“They had the players to do it,”  said reigning Division IV champion coach Diana Kramer.  “All it took was some time to put the pieces in place.” 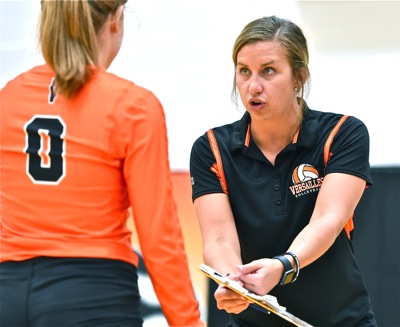 “At one point we had all those losses during the year, and the season could have gone either way.  The girls didn’t want that.”

Bruggeman, who played high school volleyball in the same St. Henry system as Kramer, figured it out in the nick of time – beating Delphos St. John and Fort Recovery to finish the regular season, and then Meadowdale, Northridge, Springfield Northeastern, CHCA, Miami East, Marion Pleasant, Tuscarawas Valley, and Independence for the 2018 title…to galvanize her credentials.

“It really goes back to the mentality of the girls,” said Bruggeman. “At one point we had all those losses during the year, and the season could have gone either way. But the girls didn’t want that. They decided once tournament started that they wanted to be a different kind of team. We just focused on getting just 1% better each day, so that we could be playing our best if we got the opportunity.”

“Coach always told us she believed in us,” adds senior Liz Ording. “And when the season was over and we had a chance to start over in the tournament we decided that this was the kind of team we wanted to be.”

Her words became manifest, because every coach says those things.  The trick is…how to turn testimony into a title.

For her ability to do it, and to do it for a second year in a row, Kenzie Bruggeman joins elite company among in the OHSAA record books.  You’re a footnote if you win once.  But if you win twice in succession you become, certainly, part of a local legacy.

And in this case, if you win twice you garner COTY recognition.  Our congratulations to Kenzie Bruggeman…our Press Pros 2018 Coach of The Year in volleyball! 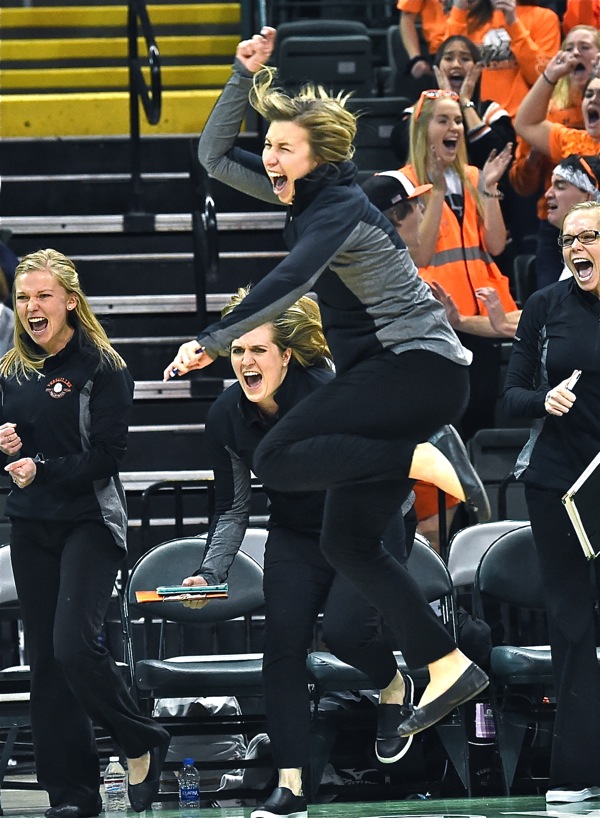