Hal McCoy: Flyers Show The ‘Dunk’, But No Mercy…

UD showed no mercy to Detroit Mercy, and sent them packing north with a clinic on dunks…in a blowout 40-point win Tuesday at UD Arena.

DAYTON — The front of the University of Detroit Mercy basketball uniforms contain, of course, the word ‘Mercy’ on the jersey fronts.

They needed the ‘Mercy’ letters to be in much bigger font Tuesday night in UD Arena so the University of Dayton Flyers could read it better.

Why? Because the Flyers delivered no mercy to Mercy, pummeling the Titans, 98-59. This was not a game that anybody from Detroit will point to and say, “Remember the Titans?

After the game, the Flyers should have delivered a box of Dunkin’ Donuts, one shy of a dozen, to the Detroit Mercy locker room.

It was the least they could do after the Flyers dunked 11 times on the Titans, eight bv 6-foot-9 red shirt freshman Obi Toppin.

Toppin’s eight stuffs led him to 22 points on 10 of 13 shooting (how does one miss while looking down on the rim?). The Flyers also received 20 from Josh Cunningham, 16 from Jalen Crutcher, 13 from J0rdan Davis and 10 from Ryan Mikesell.

Just call Toppin Sir Stuff-a-Lot and be done with it. Like the postman in a thunderstorm, there was no stoppin’ Toppin and he delivered the thunder.

Two of Toppin’s dunks came punctually. One ended a 16-0 UD breakout that took the Flyers from a 14-13 lead to a 30-13 lead. Then, with a point of emphasis, Toppin slammed one home at the halftime buzzer to give the Flyers a 49-29 lead at intermission.

Amazingly, the Flyers outscored Mercy 30-0 in the paint in the first half and made 20 of 28 shots. 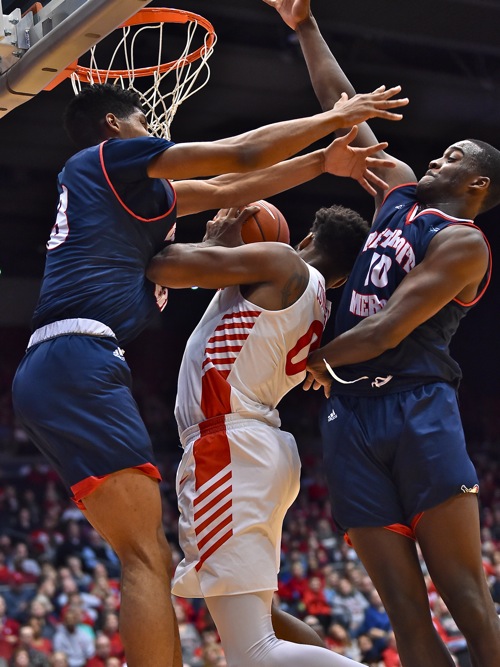 It was his duty to guard a skinny little runt who is 6-foot-1 and doesn’t weigh enough to hold down his end of a teeter-totter.

But that skinny runt, freshman Antoine Davis, came to town as the nation’s No. 2 scorer at nearly 30 points a game. In eight games he had bottomed out 82 field goals, 46 three-pointers, or 5.75 a game. And he was hitting 47 per cent of his threes.

He had scored in the 30s five times, once hitting for 42.

So it was Davis vs. Davis — UD’s Jordan against Antoine, the son of first-year coach Mike Davis, the former Indiana coach who succeeded Bobby Knight.

Davis, with some intermittent help from some of his teammates, held Mercy’s Davis to 18 firmly contested points, achieved on 6 of 23 shooting, 3 of 14 from behind the three-point demarcation.

That’s nothing special for Jordan Davis, a 6-foot-2 sophomore from Irmo, S.C. He is The Silent Silencer. More than five words in a sentence is a commencement speech. But he draws the other team’s top scorer every games and usually wraps them up in a neat package that can’t be opened until after the season.

INTERVIEWER: You made that guy work for his 18 points.

INTERVIEWER: You must take a lot of pride in your defense.

DAVIS: Yeah. Coming in I knew he was a good scorer. He was second in the country. I just wanted to make it hard for him and be physical with him. Make him take tough shots.

INTERVIEWER: Do y0u take defense as a challenge, do you like playing defense?

DAVIS: Yes, sir. Any time I face a good player, I take it personally. I just focus on locking him down.

UD coach Anthony Grant appreciated the defensive acumen of Davis, as all coaches are hail and hearty about defense.

“Jordan made it really difficult for him,” said Grant. “There was probably only a couple of times he was able to free himself for clean looks. J.D. did a really good job because he did the bulk of the job on him.” 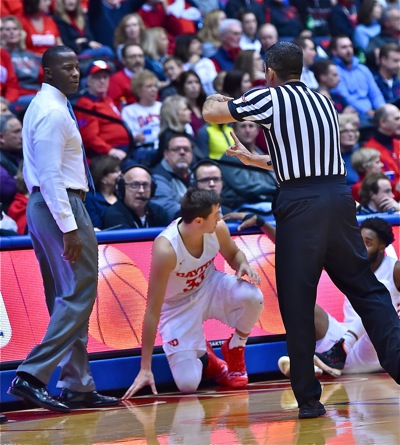 ‘T’ time for Tony…UD coach Anthony Grant watches disapprovingly as he’s assessed a technical foul during the second half.

“For a freshman to come in and be able to do what he has done, with his ability to score the basketball against every defense known is pretty impressive,” said Grant. “He has a great ability to create shot off the bounce. And it is not often you see a guy walk in the door in college basketball who can create his own shots off the dribble, run off screens and free himself to make space for good looks and can score from all three levels — at the rim, at mid-range and at the NBA three distance. That’s a pretty impressive skill set for a freshman walking in the door.”

The only skill set Toppin needed was to catch a basketball above the rim and jam the ball threw the twine without ensnaring his fingers.

“Those are exciting plays and it brings energy to his teammates, to our fans,” said Grant. “Those are great momentum swing plays. And I think Obi would tell you he was the beneficiary of his teammates tonight. They foumd him under the basket.”

Indeed, Toppin’s teammates enjoy the show and they have up front and personal views without paying for seats.

After he dunked four times in the first half, he was shooting on the outside during warm-up before the second half and Jalen Crutcher told him, “No, go dunk the ball.” And of the dunks, his teammates tell him, “Keep doing it.

While Toppin is soaring above the rim like a bird in flight, opponents get a close-up look at his tattoos. On the right arm is a cross and a dove and a quote from his mother: “Success is no accident.”

On his left arm he has inscribed, “Daniel,” and he said, “That was my little brother who passed away when he was not even a year old. He was a year younger than me.” 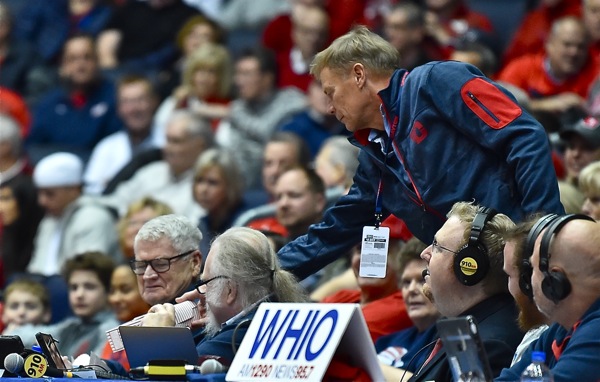 An obliging fan helps out with replacement popcorn after Press Pros columnist Hal McCoy’s (left, above) was crushed by UD’s Jalen Crutcher. 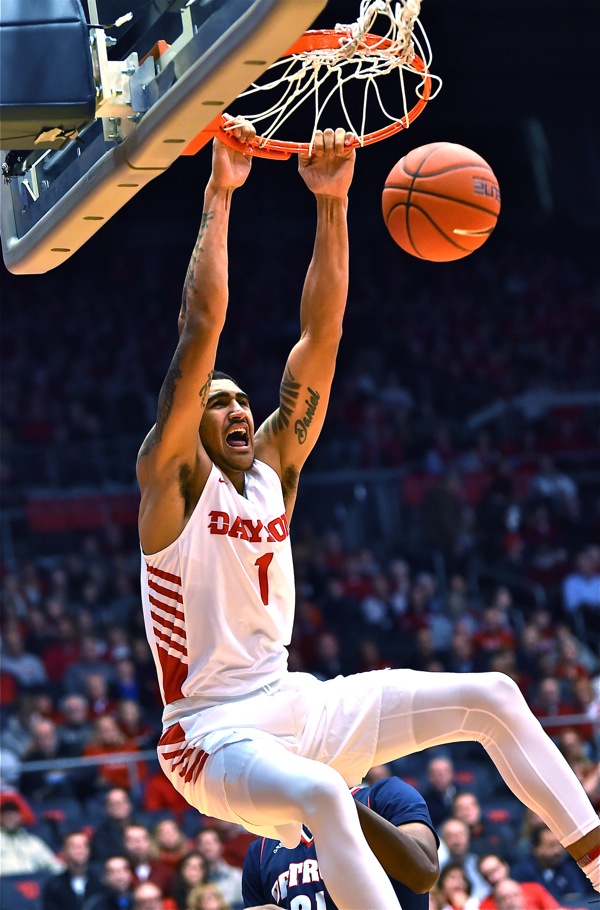 No Stoppin' Toppin...Redshirt freshman Obi Toppin throws down on of his eight dunks while going 10 of 13 from the floor in Tuesday's win. (Press Pros Feature Photos by Sonny Fulks)