Without question they’re under the radar, but Jim Meyer’s Covington girls can play some ‘ball’, and they have the best area Division IV player you may not have heard of…a girl named Sammi Whiteman.

Covington – Veteran coach Jim Meyer smiled at the suggestion Monday night that his 4-1 Buccaneers, for the present, may be the best area Division IV team that no one expects.

“Well, we just played Versailles (a 68-35 loss) and we have some very tough games coming up, so we’ll have a better idea pretty soon,”  he answered.  And Meyer is no promotions man.  Brother of former Covington and Ohio Northern standout Jay Meyer, he knows his basketball…and fool’s gold when he sees it.

And Monday his Buccaneers gave a pretty good account of what they’re to be like on a given night with a resounding 66-34 win over Cross County Conference rival, Twin Valley South.  Ironically, for the first three minutes it seemed like a basketball game.  And then…for the next thirteen minutes until half time it looked more like a tsunami, a tidal wave triggered by the Buccaneers indefatigable senior point guard, Sammi Whiteman.

Whiteman, all 5’8″ of her (wringing wet), dropped eleven points on the outmanned Panthers on the way to a commanding 44-13 halftime lead.  But perhaps just as impressive, was her ability to find open teammates while occupying the attention of multiple defenders.  She made it easy for teammates Morgan Kimmel, Makenzee Maschino, Lauren Christian and others to operate in open space, find good shots, and score.

Covington, while young, is a team that bears watching while the bulk of area Division IV attention will be focused on Minster, Fort Recovery, Fort Loramie, and rival CCC teams like Miami East and Tri-Village.  They’re not as deep as some, not as physical as Minster and Recovery…but for their ability to follow their leader (Sammi Whiteman) on a given night they can give you headaches.

“The thing is we’ve been with Sammi now for a couple of years, so we’ve come to think that what she does is everyday, normal things,”  says Meyer.  “Because, she does them so effortlessly.  But when you get her in a game and when you glance down at the other coach…and they’re standing there shaking their head you realize just how good she is. 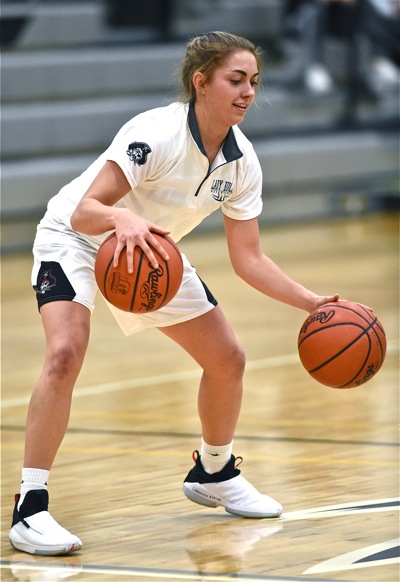 “We take her granted, and we shouldn’t because she’s a difference maker.  She makes everything go, and the other day Versailles, of all people, came at her with two defenders because she was being that effective against a team that good.  So that just tells you something about her skills.  We had 35 points for the game and she had 24 of them.”

A recent commit to play college basketball next year at Trevecca Nazarene College, in Nashville, Tennessee, her skills are so obvious as to draw comparisons to other great women players past at Covington, principally Lynnette Roeth (1,879 points), Michelle Meyer (1,560 points and Meyer’s niece), and Erica Bowman (1,495 points).  Entering her senior season, Whiteman already had 1,305 points and is likely to overtake both Bowman and Meyer before the end of this season.

“Sammi is the result of a kid who’s worked at the game since she was a fifth grader,”  says Meyer.  “It’s been her life.  She calls us some days and asks to get in the gym in the morning.  She has all these funky drills that I’d never seen before, but those are the things that have made her what she is.  The things she does on the court she’s practiced, and practiced, and practiced.

“She’s very aware of the rest of the court and she’s very unselfish,”  adds Meyer with an approving nod.  “Her first concern is whether the team wins or loses.  She cares about that and she gets her teammates involved.  She’s content to wait on her points and she doesn’t just ‘jack’ one very often because she’s such a team-oriented player.”

As evidence of that, Whiteman scored her 19 points in just three quarters Monday (she averages 25), but facilitated Morgan Kimmel (13 pts.) and Claudia Harrington (11 pts) each to score in double figures.

And just as impressive as her play, when it’s her turn to talk Whiteman does that effortlessly, as well.

A teenager that watches what she eats? 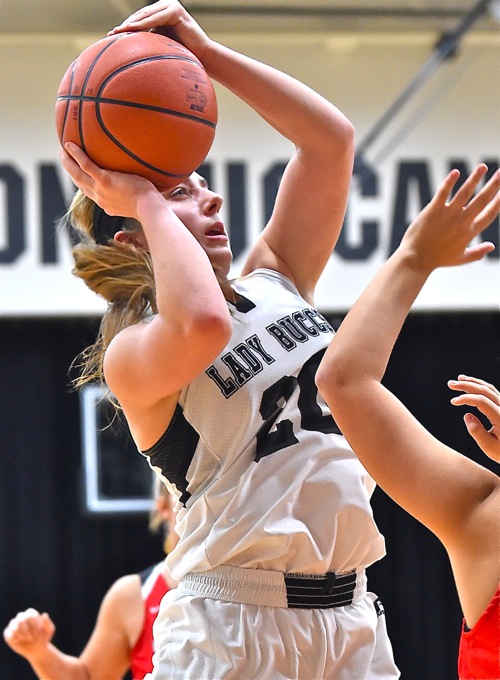 “Yep,”  says Whiteman.  “I love it (basketball), but I want to go to school and study to be an athletic trainer.

When speaking of her style of play:  “I can score, but I like getting assists more than I do scoring.  I think it’s cool to set up other people and share the ball.”

And she likes a challenge.  Small of build, Whiteman has obviously gotten enough time in the weight room to withstand the double-teams she inevitably sees.  But physical basketball is the name of the game these days and the Buccs senior isn’t the least bit shy.

“That’s my favorite,”  she smiles.  “I like to play teams that push me because it makes you better.  I think we all like that.  We might not always win, but you come away knowing it helps you get better.”

When she gets to Nashville she’ll obviously be a candidate to play point guard because of her ball skills, but Whiteman is just as comfortable playing the off-guard spot, running free off screens for open jump shots.

“I can do either,”  she says.  “But I like the point and being able to be the leader on the floor.  I like getting my teammates involved, but I can do both and expect to be both when I get to college.” 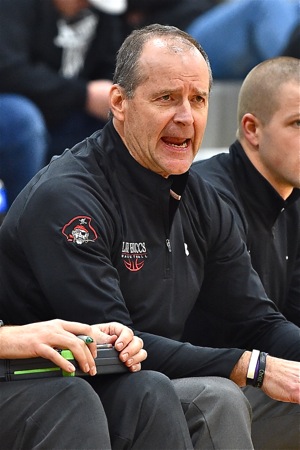 “I don’t know how good we’ll be by the end of the year,”  says Meyer.  “But we’ve got teams coming before Christmas that are going to test us.”

She’s a good student at Covington (a 3.86 GPA), which makes the school board happy, and class work at the next level will be no problem for Sammi Whiteman.  Her people skills are solid, her self-confidence is genuine, and her career goals are just as impressive as her game.

“I’d like to be a personal trainer someday, and couple that with a master degree in business.”

But between now and then, Sammi Whiteman and the Covington Buccs are good enough, and going to get better, to approach another 20-win season this winter.  And more, if they stay healthy, they could become the ultimate ‘spoiler’ come Division IV tournament time.

“I don’t now how good we’ll be by the end of the year,”  says Jim Meyer, honest as a judge.  “We’ve got a couple of freshmen playing significant minutes and the two Morgans (Kimmel and Lowe) are stepping up from being role players last year.  We’re going to get better and we’ve got teams coming before Christmas that are going to test us.”

And they’ve got the ‘whammy’, a girl named Sammi.  She’s entertaining, and she’s good.  If you like hoops…you oughta’ go see her! 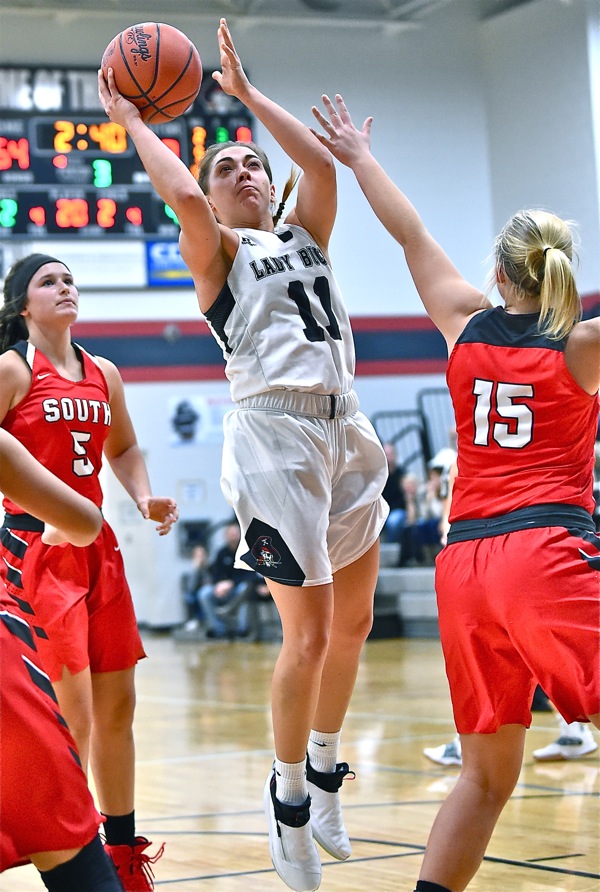 White (above, #11) averages 25 a game and scored 19 Monday in the Buccs' win over Twin Valley South. (Press Pros Feature Photos by Sonny Fulks)