Size Does Matter…Flyers Fall To Kirtland in Div. VI Final

Kirtland played magnificently on defense, shut down the Flyers ground game, and used superior size and time of possession to stop Marion Local in the Division VI final.

Canton – Not this time.

No, this time the perennial champions, the “class” of the division, as Kirtland coach Tiger LaVerde called them…the Marion Local Flyers met an obstacle that was simply ‘too big’ to overcome Friday, losing to Kirtland 16-7 in the Division VI title game at Tom Benson Stadium before 4,380, the smallest crowd to witness a Marion title game in this writer’s memory.

Kirtland, which boasted size on their interior lines the likes of most college teams, used a superior ground game (61 rushes for 303 yards) to squeeze the life out of ten-time champion Marion Local, almost doubling the Flyers in time of possession – 35:18 to 18:37.

“They played well.  They were good,”  said Marion coach Tim Goodwin.  “They did some things we don’t see very often, and you certainly don’t see size like they have very often. ”

“They were the biggest team we had seen all season…the most physical team we’ve seen this year,”  said senior defensive end Sam Huelsman.  “#74 (6’5″, 300-pound Jack Bailey) was a good player.”

The Hornets used that size to literally eliminate Marion’s own run game – the Flyers ran the ball just 21 times for 41 yards.

“Any time you can keep the ball out of that team’s hands it’s a good thing,”  said LaVerde in the post-game press conference.  “I don’t know how many points a game they average, but I know they can put up a bunch of points and they did that to us last year.  They whipped us then, and we went home, went to work, and these kids wanted to come back this year and win.”

It was an uncharacteristic game for Marion, one in which you kept wondering when they would break through – find an offensive rhythm and some momentum.  But it never happened, and largely because of an event that happened on Marion’s third play from scrimmage. 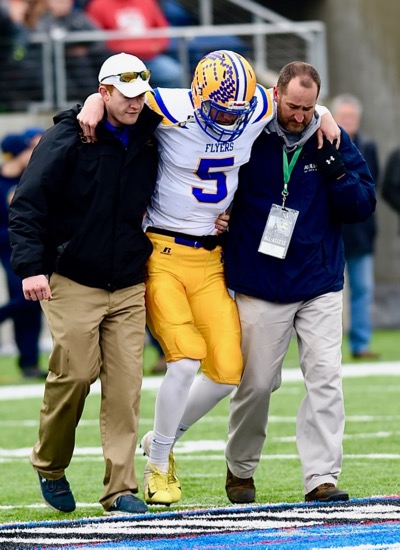 Quarterback Nate Bruns was injured on the third play from scrimmage

On third down and two quarterback Nate Bruns ran the ball for the first down, but was trapped and tackled against the Kirtland sideline.  Somehow in the tackle Bruns had his right knee buckle beneath him and he had to be helped from the field.  Teammate and sub quarterback Kyle Muhlenkamp came on for the remainder of that series of downs, but the Flyers eventually turned the ball over on downs at the Kirtland 45 yard line.

Bruns eventually came back to play…but he was never the same quarterback.  Asked post-game if the injury affected him, Bruns replied tersely, “No, I just didn’t make plays.”

But in fact it did affect Bruns, who suffered with accuracy on his throws (he finished  16 of 35 for 187 yards and one interception), and he never ran again, robbing Marion of a valuable offensive option.

“It definitely affected the way they defended us,”  said Tim Goodwin.  “It took away a rushing option for us and allowed them to do more to stop our passing game.”

And in fact the Kirtland secondary, that was burned so badly in last year’s game, double and triple-teamed Nick Tangeman all day, limited the 6’4″ senior to just four catches for 59 yards.

And for the way Kirtland controlled the line of scrimmage, it was pass, or nothing, for the remainder of the game.

“We’ve tried to do some different things with our run game all year,” added Goodwin.  “But basically we’ve tried to run enough to keep people honest.”

But they couldn’t do that Friday. 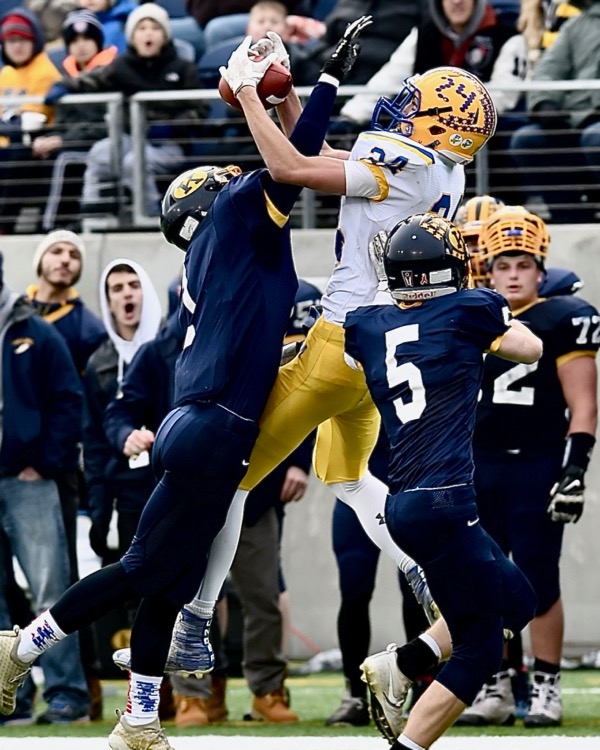 Kirtland limited Nick Tangeman to just four catches for 57 yards, but this one for 27 yards was a game highlight.

Nolan Habodasz had no yards in six attempts.

Matt Rethman had one yard in four attempts.

Kyle Francis had six yards in one attempt.

Kyle Muhlenkamp had seven yards in on one attempt.

And Bruns, on his three lone attempts, finished with a team-leading 13 yards.

After a scoreless first quarter, Kirtland opened the second with a one-yard touchdown run by Jake Neibecker at 11:58. 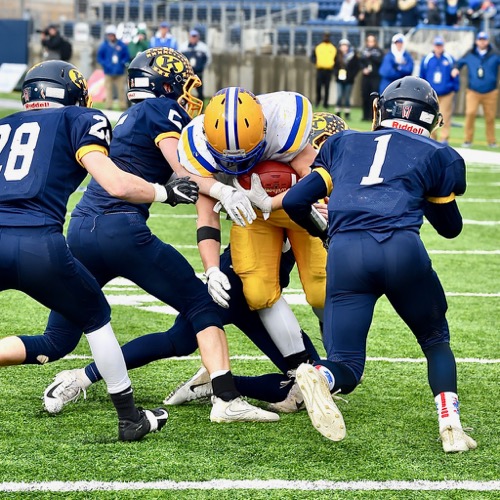 Brandon Fleck came this close to scoring on the Flyers’ last, best chance in the fourth quarter.

On the ensuing possession Marion drove down the field through the air and and scored on a one yard run by Brandon Fleck.

With good field position before the half, Kirtland ignited a drive of its own and scored on a seven-yard run around the end by Luke Gardner.  The extra point attempt was no good.

With barely over a minute left before the half, Bruns again passed Marion down the field, highlighted by a magnificent 27-yard catch by Nick Tangeman, with three defenders draped on him.  But on the last play of the half, Bruns tried to connect with Tangeman again in the corner of the end zone, but Kirtland’s Connor Gron stepped in front of the pass and intercepted it to end the half.

Neither team broke the goal line again, as it turned out.  The only score of the second half came in the third quarter on a 32 yard field goal by Kirtland’s sophomore kicker, Mario Rodin to make the score 16-7.

But Marion had its chances, principally in the fourth quarter when Bruns again passed the Flyers inside the Kirtland twenty yard line.  But on fourth and four from the twelve yard line Bruns missed connections with Matt Rethman and they turned the ball over on downs.

Kirtland took over but couldn’t make a first down and punted on fourth and six.  In another pivotal of the game, Marion’s Isaac Eifert came ripping through the middle of the line, blocked the punt, and Marion again had the ball on the Kirtland 20 yard line with ten minutes remaining. 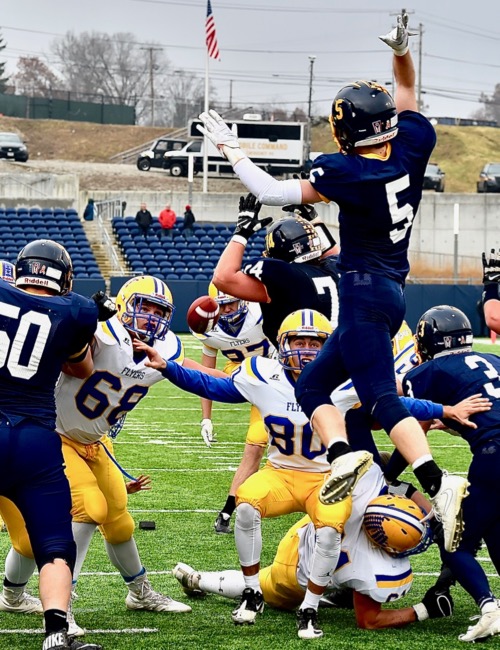 They moved the ball to the Kirtland three yard line in thee plays, aided by a face mask penalty.  But in three plays from the three yard line they couldn’t score, choosing on fourth down to attempt an 18-yard field goal by kicker Alex Klosterman.  But a breakdown in kicker protection allowed Jack Bailey to get his hands up at the line and bat the kick down – no good, and Marion was again turned away.

Kirtland took over at their own 40 yard line and ran out the clock for the remaining 6:41 seconds.

“Our kids played hard,”  said Goodwin.  “But their defense really made some plays when they had to.  We had some opportunities, but we didn’t cash in on them.  Offensively, they took a different approach from last year because we’re a different team than we were then.  We anticipated what they did after watching the on film…they just did a good job.

“They made it tough on Nick (Tangeman) out there because their #6 (Connor Gron) did a great job.  He probably covered him better than anyone has all year.  But I think the difference in the game was our inability to rush the football, and we weren’t confident in our ability to run.  41 yards is a struggle.  We just don’t have the big strong offensive line we’ve had in past years.”

And if size does matter, Kirtland’s Tiger LaVerde was quick to accentuate his team’s advantage.

“This is the biggest line we’ve ever had,”  he said.  “But these guys are also great athletes.  They play multiple sports, including basketball, and they can do a lot of things out there.  So we leaned on them today to keep the ball out of Marion’s hands.  They’re a great program, they’ve won here ten times, and the best thing we could do was run the football and control time of possession.  We didn’t want them to have the ball any more than possible.  Even on the fourth downs that we went for late in the game…after having the punt blocked we were scared to death of having another one blocked.” 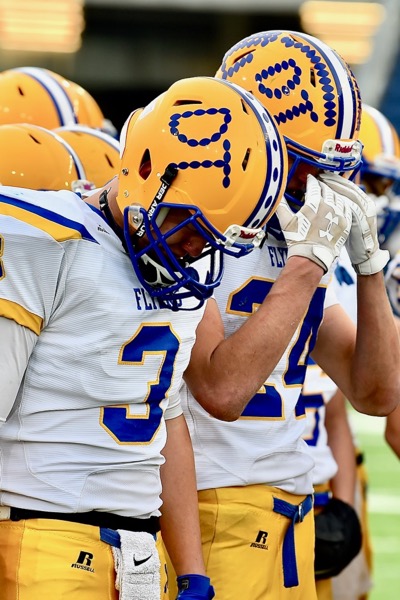 Marion’s Max Albers and Nick Tangeman agonize over the loss.

More advantage?  The interception by Connor Gron to keep Marion out of the end zone at the end of the first half.

“We knew that if they scored and went up that they’d have momentum and the football to start the second half,”  said Gron.  “Coach told me before the game that #24 (Tangeman) was my responsibility and I wanted to make a play there to end the half.”

But in Tim Godwin’s words, they made lot of plays…and more than Marion for no better reason than they had the ball for twice the amount of time.

And for the fact of a wounded Nate Bruns, who courageously took responsibility for not making enough plays, but after his injury in the quarter he was a visibly different player.

It marked the fourth state title for Kirtland since 2011, and one that LaVerde and his seniors took immense pride in for the fact of beating the ten-time champions.

Marion, for a time, will have to wait for another opportunity to tie the all-time record of Cleveland St. Ignatius, falling for just the third time in thirteen state championship finals.  They previously lost to Columbus Grove in 2003, and Kirtland in 2015.

“We beat them back then and they beat us last year,”  added Connor Gron.  “This one broke the tie.”

And without question, a few hearts in blue and gold.  It’s been a tough year in Maria Stein – too many losses to a legacy that’s respected by the state even on a day when they lose on the field.

They’re still the class of the division, as Tiger LaVerde said, while enjoying his team’s own moment for at least this year.  And…he meant it! 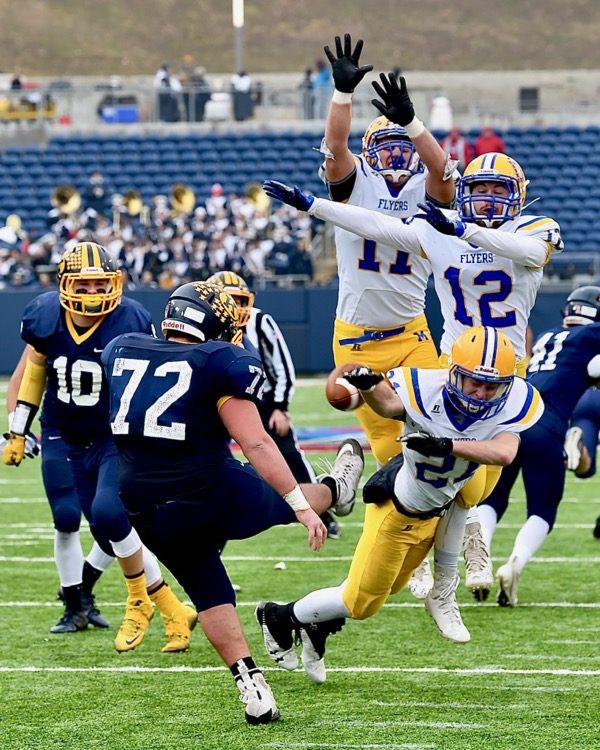 Isaac Eifert's (#12, above) block of a Kirtland punt game Marion a pivotal chance in the fourth quarter, but the Flyers couldn't cash in. (Press Pros Feature Photos by Sonny Fulks)