Thoughts On Why, Of All Things…We Hate For The Sake Of Football!

On the eve of the this year’s OHSAA state football tournament, some expanded ideas on why our culture has such a tough time getting along…and can you honestly give me one good reason for hating the whole state of Michigan, except for someone telling you to do it?

For the next three days we’ll make our annual trip to the state football tournament – in Canton again this year – and I confess that I look forward as much to the amenities of Canton as much as I do the football.

One, Benders Restaurant, downtown, is a fabulous place to eat if you haven’t been there. I will be.

Two, the memorabilia in the Pro Football Hall of Fame is made for nostalgics like me. I’m always tickled over how you professing Browns fans thump your chest and wear dog masks…and yet, you’ve never heard of Frank Ryan, Gene Hickerson, and Rich Kreitling, all names of significant players during the team’s glory days. If I know those guys and you don’t, I might want to hear someday how you’re a fan of the Browns with no Browns knowledge, and I’m not a fan and know more than you. Just sayin’!

Three, while it’s more convenient to have the tournament in Columbus, no one in Columbus actually cares that it’s there, in contrast to Canton. IT IS a big deal for the locals here, with their great high school football traditions, the hall of fame, and a genuine desire to play host to those who visit this weekend. You don’t get that in Columbus where it’s Buckeyes or bust. I’ve made friends here in Canton over the years, and I’ll look forward to seeing them again.

I will also take a moment to share one of the responses received since publishing our post two weeks ago (What Would It Take To Really Unify Us) about what it would take to actually bring us together as a people, and as a country.

One of the best came from a first-time reader named Jack Hoelscher, who wrote: “You made a great point about taking individual responsibility for treating each other better.  But I might also add that one of the first things to do is get off Facebook.  Facebook has become a toxic place for people to argue about politics and post mean, insensitive remarks. There’s certainly nothing unifying about it, and if you want to communicate by social media just send an email. What we used to say and do in private seemed to work. It might be a good idea to do it that way again.”

And to Hoelscher’s point…it’s amazing to read and hear the comments of otherwise normal, God-fearing people this week (on Facebook) still gloating over the outcome of the Ohio State-Michigan football game.

If you’re thin in your history allow me to edify.

The Ohio State-Michigan rival goes back a long ways, to be sure, but it didn’t start out by one hating the other. Truthfully, over the years the rivalry itself grew, in part, for the fact that both Ohio State and Michigan had the league’s biggest football stadiums and couldn’t fill them. The Horseshoe was built in 1922 and right after it was completed the Great Depression hit and people couldn’t afford tickets.  Then the ‘war years’ took another toll, when average attendance dipped beneath 40,000. And by the time Woody Hayes got the Ohio State job in 1951 they were averaging 60,000, but the Horseshoe seated 80,000 and they only played nine games back then. 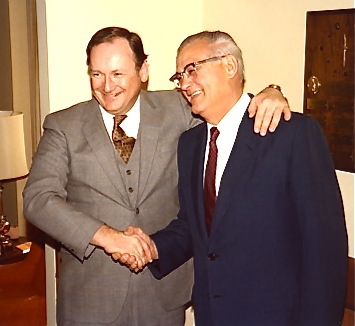 Bo Schembechler (left) with Woody Hayes in 1981. Schembechler played for Hayes at Miami of Ohio and coached with Hayes as an assistant at Ohio State from 1958-62.  Now, do these guys look like mortal enemies?

In addition, the Buckeyes were averaging about six wins a year, and Michigan wasn’t doing much better with Bennie Oosterbaan as coach. And there was a stretch in the 1960s when both Ohio State and Michigan were struggling to win games, highlighted by Woody’s 4-5 season in 1966…and when Bump Elliott took over at Michigan in 1959 he had five losing seasons in his decade-long tenure as coach.

So, by the time Bo Schembechler was hired at Michigan in 1969 (a close friend of Hayes and a former assistant when they were at Miami, and later at Ohio State), Woody and Bo took it upon themselves to heat up the Ohio State-Michigan rivalry for the sake of…marketing. They created interest like never before, they sold tickets, and they paved the way (good and bad) for the current hysteria over people from the state down south hating Michigan.

But in fact, in Michigan itself, in recent years the rivalry talk there has turned more towards East Lansing and Michigan State, because the Spartans have had their way too often with the bigger, and more-established Wolverines, and it’s become a state-wide embarrassment for U of M alumni.

Of course both Hayes and Schembechler are dead now, as well as many who were around for the refueling of the rivalry, but two close contacts that were there back then – John Bozick (former equipment manager for the Buckeyes) and Bert Charles (former Columbus broadcaster of Buckeye games) – talked for years behind closed doors over the relationship between Hayes and Schembechler and their pact to make Ohio State-Michigan the nation’s top football rivalry.

And how ironic (don’t you think) that while some of you drink too much, print obscene T-shirts, and claim to hate…the two men behind it with the most to lose were best of friends.

So again, the next time we meet I’d be interested to hear your best reason…for hating Michigan. 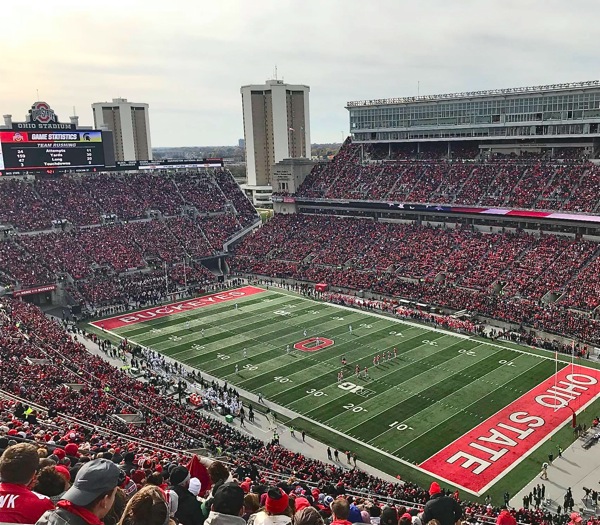 It wasn't always like this...and some claim that the Ohio State-Michigan rivalry grew out of the two schools' need to sell tickets and fill their massive stadiums. (Press Pros File Photo)