Coldwater – Quick, and tell us what sport at Coldwater High School has won seven state titles since the year 2000.

It’s actually bowling, coached by Rick Hartings, the owner and proprietor of Pla-Mor Lanes, who’s coached the Cavaliers’ girls teams to four state titles and the boys team to three.  And to their credit, the football programs of John Reed and Chip Otten have won six titles, but proportionately, it was just as loud and enthusiastic at Pla-Mor Lanes on Saturday morning for bowling as it is at Cavalier Stadium on Friday nights.

Four MAC schools teamed up for a ‘quad’ meet Saturday – host Coldwater, St. Henry, Parkway and Fort Recovery – and when it was over it was three-time state champion Coldwater who narrowly edged St. Henry for overall honors, 2,741 to 2550.  Fort Recovery claimed third place with 2,452, while Parkway finished fourth with 2,312.

“It’s pretty exciting to win the state title in bowling here,”  said Hartings.  “Since the OHSAA took over bowling in 2007 it’s kind of taken bowling to a whole ‘nuther level.  Now we’re treated like and recognized with the other sports in the state.  It’s an awesome feeling when you come back with the big gold trophy, and I know the kids take as much pride in it as the ones do that win in the other sports.”

And in the second week of the 2018-19 season there were some individuals in Saturday’s match that served notice that their teams will be competitive throughout the four-month season that concludes in mid-February.

High score in individual bowling Saturday went to Fort Recovery’s Jared Timmerman, who rolled a 225 and narrowly edged St. Henry’s Matt Mescher, who had a 224. 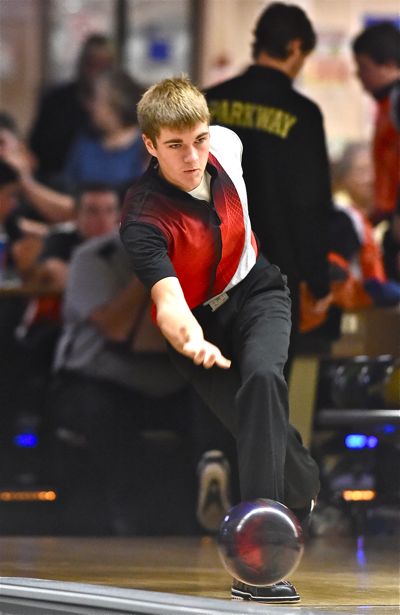 St. Henry’s Matt Mescher was second overall in series to teammate Noah Stammen, with a 421.

Stammen had the high series for two games with 428, followed by teammate Matt Mescher with 421.  Schoenherr had 418 for Coldwater.

Stammen, who looks like a gentle giant, and could easily play right tackle for the Redskins’ football team, smiles when you ask him about his preference for bowling, and his unique two-hand style that allows him to produce tremendous torque and spin on the ball, which results in a lot of pin action and added excitement at the end of the lane.

“I used to bowl one-handed,”  said Stammen.  “But we came back from state one year and started the two-hand style with our coach just for fun.  I tried to do an entire game two-handed and bowled a 230, and Coach (Travis Schlater) decided I should keep that style.”

And as for football?

“I quit football a long time ago.  A friend got me into bowling and I’ve just stuck with it.  I really like it.”

Teammate Matt Mescher bowls with the traditional one-handed style, and besides his 421 on Saturday drew some high fives for converting the difficult 4-7-10 split.

“You know in practice I’ve done it multiple times,”  he said with a bit of obvious pride.  “And I’ve done it a few times in matches, but it’s hard.  You have to hit the right mark.  I had another one today that I missed because I was a little behind it (the ten pin).”

Coldwater’s Derek Siefring also features the two-hand style and benefits from it more than Stammen, perhaps, because he’s almost half the size of the Stammen.  But size notwithstanding, Siefring really cranks it down the alley. 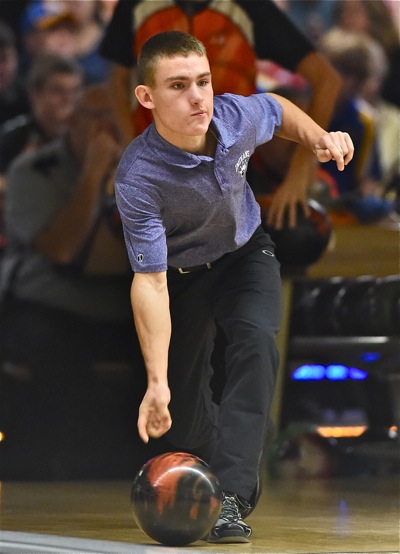 “It just kinda’ came to me after watching some other guys,”  he shrugged.  “Then after I tried it I just stuck with it because I bowled better with it than the way I was doing one-handed.”

Schoenherr and Siefring are more than aware of the pride and popularity held for Coldwater football, and take the responsibility for add to their three current titles in boys bowling with the same seriousness.

“I think it’s pretty much the same,” says Schoenherr, a junior.  “There’s a lot of pressure being on this year’s team because we’ve lost some of the older guys (graduation).  But we all want to step up and see if we can’t get back there (state) and win.  The atmosphere for bowling is really unbelievable because so many people show up, your family’s here, and everyone cheers.  You also don’t have to deal with the environment.  It’s dry and warm inside.”

Area high school bowling has a regular weekly schedule in Versailles, Coldwater, New Bremen, Minster, Fort Recovery and other area establishments, and if you want to go see give your school’s athletic office a call for time and place.  Admission Saturday was just $3.50, and given the history of things you’re bound to see some champions in the making.

“We’re not even in mid-season form yet,”  smiled Derek Siefring.   And he meant it! 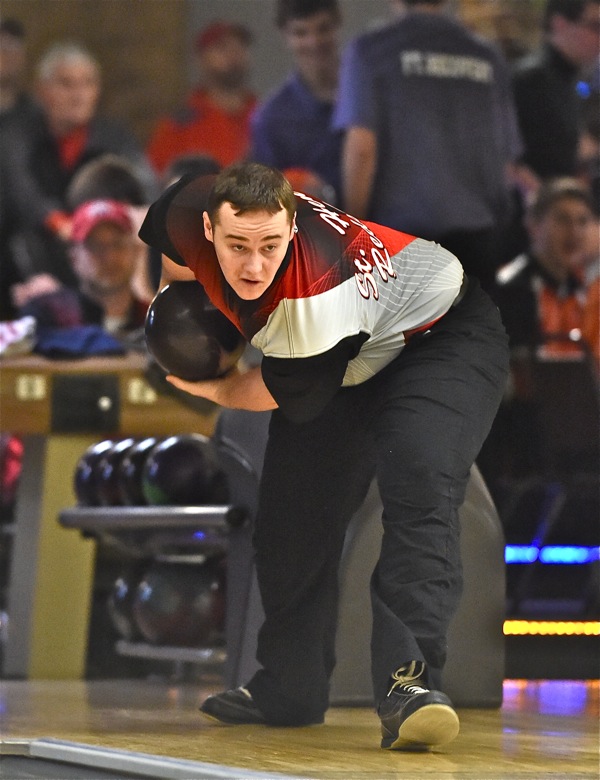