It was a game for a half, but the defense and some clutch second half shooting sent the Buckeyes to their five straight win.

Columbus – It could have been gripping theater when four Ohio State players, Kaleb and Andre Wesson, Kyle Young and Luther Muhammad, were not introduced as starters before tip-off against Samford.

As a disciplinary measure for not running on Chris Holtmann Standard Time, they watched the first few minutes from some of the best seats in Value City Arena right next to the coaches.

There could have been more intrigue when the Buckeyes were puzzled by a zone defense and walk-the-ball-up offense by the Southern Conference team and were behind most of the first half.

Did Ohio State get fat-headed winning their first four games and being ranked 23rd nationally? Is there a morale problem?

Uh, no, it wasn’t headline material at all.

The players were benched for several minutes and, yeah, the Bulldogs played that well.

In the end, a crowd of 10,725 walked out of the building smiling after the Buckeyes ramped up their defense to defeat Samford 68-50 on Tuesday night.

Unless someone had given the points, no one else was upset that Ohio State failed to cover the 21 ½-point spread.

“It was a minor team infraction of being late and it needed to be addressed,’’ coach Chris Holtmann said of the discipline. “We talked about it this week. We have great kids – awesome kids.’’

Samford did come in having won all five it its games, most recently 73-60 at Cleveland State on Sunday, and this team did play in the CollegeInsider.Com tournament last season. 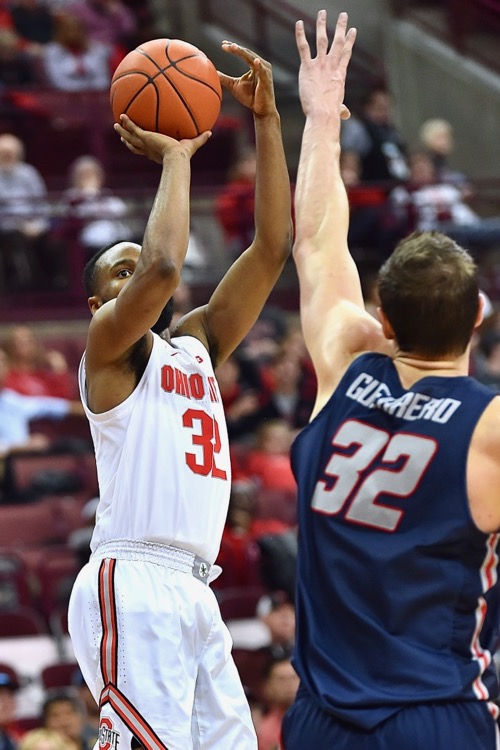 In the first half, guard Myron Gordon was the best player on the court in putting up 16 points to help give Samford a 32-29 lead. The crowd was uneasy with the Buckeyes missing 15 of 24 shots and giving up 18 points in the paint.

“All of our guys can start,’’ senior graduate student Keyshawn Woods said. “Yeah, it wasn’t the start we wanted, but in the end when your number is called and Kaleb came in and did his job and (Andre) came in and did his job. . . . Defensive stops – we started getting stops. We stopped giving up easy scores and finally started communicating like we did the previous games. We played Ohio State basketball.’’

The play that showed the team’s determination occurred when senior point guard C.J. Jackson went flying like a super hero into the second row of seats to save the ball in the backcourt. Still, the ball was perilously close to landing on the sideline stripe, and Muhammad left his feet to zip a no-look, behind-the-back pass to Kaleb Wesson.

The punctuation mark of the possession was a basket by Andre Wesson in close with 14:59 left that made it 36-35 for Ohio State’s first lead since midway in the first half.

“That definitely was some play just seeing that your brother (Jackson) is giving that great of an effort when you are down,’’ Kaleb Wesson said.

Woods sensed that the complexion of the game was changing just hearing the reaction of the crowd.

“I felt like that got our crowd into it a lot,’’ he said. “Our crowd got loud out there. And right after that K got a charge and they were electrified even more. I thought that sparked our run.’’ 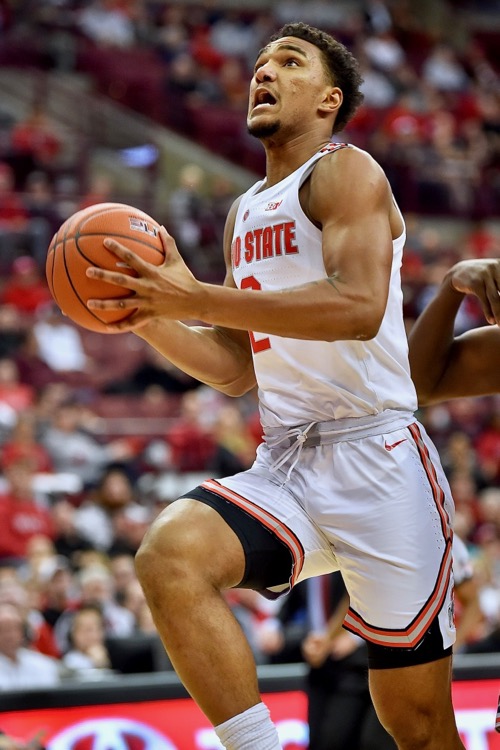 Freshman Musa Jallow rises to the rim in Tuesday’s 68-50 win over Samford.

Samford coach Scott Padgett, who was a starting forward on Kentucky’s 1998 national championship team and played for four NBA teams, was impressed with how the Buckeyes got themselves settled down.

This is still an Ohio State team trying to establish how it plays from one possession to the next in trying to break in three new faces to the lineup.

“In the first half we couldn’t have stuck with our game plan more than we did,’’ Padgett said. “We made shots and were able to get into a press, which slowed down the tempo of the game and kind of got it to a grinding halt. That’s tough for us to do because that’s not how we really play. But watching them on film I thought that’s the only way we had a chance because they carve up (man-to-man defense).’’

Holtmann and Padgett are Kentuckians, and Padgett threw the ultimate bouquet in his opponent’s direction for changing the game in the second half with outstanding adjustments.

“I thought they did a great job in the second half of saying they were not going to settle (for perimeter shots),’’ he said. “In the second half they said, ‘We’re going to get the ball inside.’ I can’t really tell you how impressed I am watching them on film and then in person on how they are coached. They play basketball the right way. They didn’t have a great first half, but they made adjustments. They came out and turned up their intensity, but what I really thought they turned up was their execution. In the second half I thought we tried to make too many hero plays.’’

A look at the play-by-play shows how calculating Ohio State was in scoring inside the three-point arc: Kaleb Wesson started the onslaught with a layup to cut the deficit to 35-31 with 17:12 left. Then came the basket by Andre Wesson off the miraculous saves by Jackson and Muhammad, an 8-foot pull-up jumper by Muhammad, a driving layup on the break by Keyshawn Woods, a follow-up by Young and a pull-up by Duane Washington Jr. in the lane.

“We were patient,’’ Woods said. “In the first half we didn’t hit shots. We got good looks. We ran our stuff – we got what we wanted. In the second half (Kaleb) got rolling, Luther got rolling and I got rolling.’’ 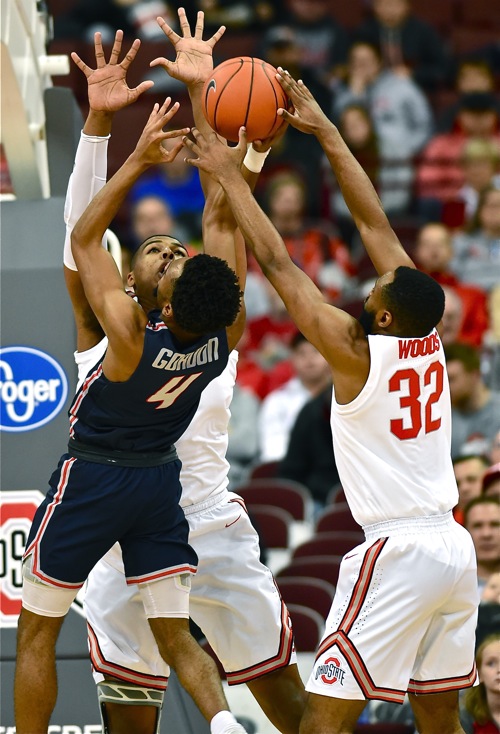 Wesson led with 19 points on 5 of 8 from the floor and 9 of 12 from the line. He had five rebounds and three assists. Woods was next with 14 points, four rebounds and four assists.

“It was the flow of the game when I found my shot a little more,’’ Wesson said. “That’s a key to our offense is just getting paint points, period. Penetration is the key.’’

There wasn’t a great speech at halftime and Holtmann didn’t throw a fit making points. He said people will know when he gets angry just noticing whether there is a bruise on his right hand from punching something.

“Coach said it best, ‘Don’t flinch,’’’ Wesson said. “Stuff like (the first half) happens. You aren’t going to hit shots all the time. You just have to don’t flinch and get it back on defense. (Defense) is something that doesn’t break down.’’

Ohio State fans might be wondering what is happening with Jackson’s shooting. He went 2-for-10 against Creighton, 2-for-6 against South Carolina State and 2-for-11 last night.

Holtmann, though, wants Jackson to clean up his floor game. He had three turnovers against Samford, but was praised for getting nine rebounds to lead the team.

It was a big week off the court for Ohio State with the signing of 6-1 point guard D.J. Carton of Bettendorf, Iowa, 6-9 small forward Alonzo Gaffney of Cleveland, and 6-6, 240-pound power forward E.J. Liddell of Belleville, Ill. One scouting service, 247Sports, calls it the No. 8 class nationally and No. 1 class in the Big Ten.

“It’s an exciting time for our program,’’ said Holtmann, who called Gaffney’s early commitment the tone-setter for Carton and Liddell to follow. “There were some nasty recruiting battles.’’

Gaffney is playing his senior season at Brewster Academy in New Hampshire, but played for Cleveland Villa Angela-St. Joseph as a freshman and sophomore. He is ranked No. 10 nationally at his position.

Carton is No. 25 nationally at his position and Liddell No. 49. 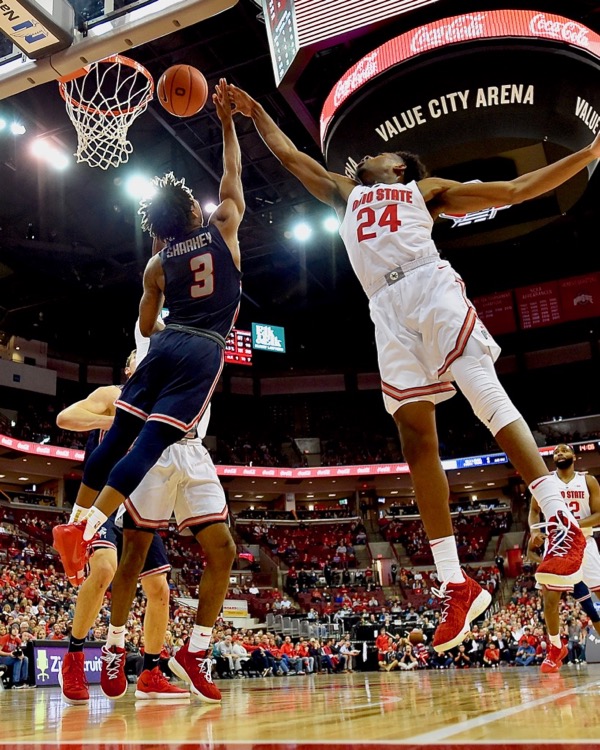 Samford's Josh Sharkey has his shot attempt swatted away by OSU's Andre Wesson. The Bucks pulled away in the second half to win 68-50. (Press Pros Feature Photos by Sonny Fulks)