Thanksgiving, Lincoln’s Address, And Why He (Still) Has The Stage To Himself

155 years after the Civil War, Gettysburg, and the most famous speech ever made by an American politician,  I’m bold to say that the significance and sincerity of those words…of that moment…will never again be duplicated.

The staff at Press Pros, our writers, sales and editorial personnel, take this opportunity to wish everyone who frequents this site – who make the content of PPM a part of their daily ritual – a happy Thanksgiving and holiday season to come.

It is a blessing to do what we do, to provide what one recently complimented as “things responsible people care about and want to read.”  That’s huge to us as we continue to grow and find responsive readership, far and wide.  And be assured, while we do have fun, we take the interests of responsible readers seriously.

A lot will be written today about the blessings for which we are all thankful, but to that point I often think about people, and those with special qualities that have contributed to the fiber of our life and the privileges we’re prone to take for granted.

As you may know, this year marks the 155th anniversary of the battle of Gettysburg, fought on July 1, 2, and 3, 1863.  And this past week marked the anniversary of Abraham Lincoln’s famous address on the afternoon of November 19, four months after the Union and Confederate armies had moved south, and just days before Thanksgiving.  Lincoln had been asked to come to Gettysburg, from Washington, to speak on the occasion of the dedication of a national military cemetery, the final resting place for nearly 5,000 fallen soldiers who had died during the action of  the previous summer.

So the question posed to me last weekend, in Gettysburg, was:  “Given an interest in history, why have you never written about the Gettysburg Address?”

Well, timing, I guess, given that nearly everyone has taken the opportunity to weigh in and reap some political profile from the occasion.  I always listen closely, with amusement, because what I hear says more about the talking heads of our day than it does about the significance of Gettysburg, Lincoln, or one of the important dates in American history.  The term that comes to my mind is …”lip service”.

I’m also reminded of the words of the orator Edward Everett, who preceded Lincoln on that November afternoon in 1863 – Everett who spoke for nearly two hours as the warmup act to the president and is remembered 155 years later only for the length of his speech and not the content.  Later, he said to Lincoln, “I wish I could have said as much in two hours as you did in two minutes.”  And does that not remind you of the “Edward Everetts” of this day?

Edward Everett, the American orator who preceded Lincoln at Gettysburg with two hours of speech that no one now remembers.

To take it a step farther, I say that what Lincoln said in his address back then is timeless in its relevance to civilization itself, while to most Americans now his words mean little more than just a famous quote from one of the more distinguishable presidents.  Lincoln, I think, ranks above all others in that respect.  Franklin Roosevelt and John F. Kennedy also come to mind.  Herbert Hoover and Woodrow Wilson…not so much!

But here’s what those who have an instinct for historical fact must understand and appreciate about the words of Lincoln on November 19, 1863.  For what he said and the way he said it, he still has the stage to himself a century and a half later.  In terms of marking the occasion by his personal presence, in terms of his personal commitment and sincerity, there has been no other in that office since that even comes close.  And why?

Because people actually believed what presidents said back then, and without reservation!

Compare that fact to the politicians of this day.  Had “Honest Abe” told you that you could keep your existing health insurance policy, that we needed a wall, or that he hadn’t had sexual relations with his intern, I think people would have believed he was telling the truth.

Lincoln would not have concerned himself with the language of his speech, to ensure that he didn’t offend anyone, or any particular denomination or sect.  There was no such thing as political correctness in 1863 and the president spoke on behalf of one nation and one people united in the pursuit of preserving national unity, not states’ rights or individual agendas.

He did not concern himself with the complaints of those demanding peace (and there were pacifists back then).

He did not concern himself with the consequences of his words and their impact on his re-election the following year.

He did not concern himself with popularity within his own Republican party, or advantage taken by the opposing Democrats, or with those like one Southern sympathizer that ultimately shot him.

Abraham Lincoln made no apologies for America paying the ultimate price in order to consecrate not only a final resting place, but an ideal that would last for generations – for a standard of life that would make America and Americans the envy of the rest of the world.  He did not equivocate or make excuses for being strong, and proud.

His original thoughts were said to be written on a scrap of paper, but were later written in the long form seen above by the President for his personal assistants, John Nicolay and John Hay.

Abraham Lincoln did not ask members of his cabinet, or his personal staff, for ideas or cautionary constraints.  He didn’t need them.  He had that kind of personal leadership quality.   His words were his own, written on a scrap of paper, as compared to the presidents of this day who would convene a room full of speech writers to consider context and political “spin”.

Gettysburg, for the past 155 years, has become known as the “high water mark” of the Civil War.  It wasn’t the final battle, but it did mark the point in the war where the Southern effort began to unravel.  I would go so far as to say that the impact of Gettysburg on the populace was not unlike that of the events of September 11, 2001.

And I would ask you this:  Was there anything said by the president, or any politician, in the aftermath of that tragedy that stands out in the minds of anyone…that will be remembered…compared to what Lincoln said at Gettysburg?

This is what Lincoln said on the occasion of his address to Congress on December 1, 1862:  He said, “No personal significance, or insignificance, can spare one or another of us.  We must disenthrall ourselves and then we shall save our country.”  Compare that to the attitude of entitlement of this day, what Kennedy touched on when he said, “Ask not what your country can do for you.  Ask what you can do for your country.”

The irony of the Gettysburg Address?

Lincoln, without knowing it, had the last word on America as we were then, and what we’d like to be again.  By what he said in two minutes, in 371 words, he had the stage to himself. 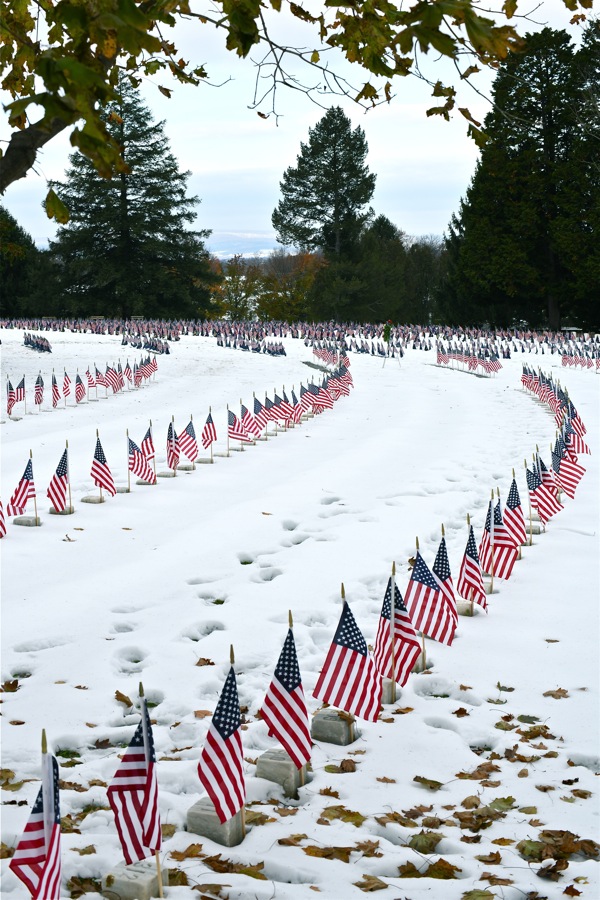 On a cold morning at Gettysburg the stars and stripes of our liberty mark the graves that Abraham Lincoln consecrated on Thanksgiving 155 years ago. (Press Pros File Photos)