Thanks to a revamped lineup and a repaired Ryan Mikesell, the Flyers improved to 2-0 with a Saturday night massacre of Coppin State.

DAYTON — There is nothing poppin’ at Coppin when it comes to basketball. It might be the worst traveling show in America.

They only thing hoppin’ with Coppin is their itinerary — 13 of Coppin State’s first 15 basketball games are on the road this season.

The Eagles, certainly not high-flying eagles except when they hop on an airplane, were ranked by KenPomery.com when the season began as 348th out of 353 Division I schools playing basketball.

And they might have fallen a couple of notches Saturday night in UD Arena when they lost to the University of Dayton, 76-46.

They scored 17 fewer points than the University of Dayton football team scored Saturday afternoon in a 63-20 win over Morehead State.

The only positive attribute was that Coppin was supposed to be poppin’ from the outside, adept outside shooters. They made 3 of 24.

All of that didn’t take away from an outstanding performance by Dayton’s Ryan Mikesell, the 6-foot-7 redshirt junior from St. Henry.

Mikesell wore the red shirt last season because he sat and watched all year while rehabbing both hips after surgery.

On this frigid night outside, Coppin was not stoppin’ the hot-shooting Mikesell. He made seven of 10 shots en route to 18 points and recorded a double-double with 10 rebounds.

And how apropos was it that UD’s leading scorer against Coppin was Toppin, Obi Toppin with 19 points, with several dunks in the mix.

The night, though, belonged to Mikesell, who blushingly recalled how tough it was last year, especially right after his surgery. 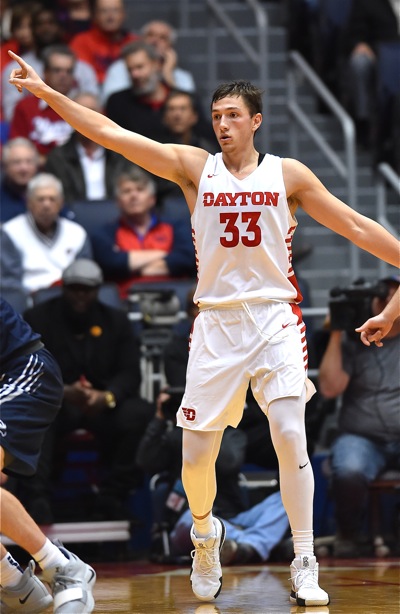 “I wasn’t nervous coming back,”  says Mikesell.  “I was just anxious because I really wanted to play.  Watching them really revamped by passion for the game.”

“Now I’m here and able to go to the bathroom by myself,” he said with an impish grin.

And he is relieved, so to speak, that mom’s help is over and sitting a year without playing is over. He said nerves didn’t bother him after missing a year.

“I wasn’t too nervous coming back,” he said. “I was just anxious because I really wanted to play. Watching them play really revamped my passion for the game. It was really tough at the beginning of last season because I wasn’t playing any basketball. I was just rehabbing, working with the trainer three and four hours a day.

“Once I was able to do basketball things it got a little better, but obviously sitting and watching the guys play, the guys you worked out with, was tough. It was a long journey, it really was.”

It all began his sophomore season when his hips began aching.

“I had pain my entire sophomore year,” he said. “Leading up to the season it wasn’t too bad. Once the season wore on I was really in a lot of pain trying to make it through the season. I was with (athletic trainer) Mike Mulcahey, not thinking about the game, but thinking. ‘I’ve just got to get through this game.’ We were winning games and I was excited and just wanted to be part of it and not sit out.”

An MRI revealed that Mikesell tore labrums in both hips and they had to repair that and shave some bone and, “I guess I have normal hips now.”

And it shows on the floor. He is fluid and mobile and active and his second basket of the season, early in the opener against North Florida was a dunk, “My first college dunk.” And he had another one Saturday.

“I really love playing with these guys because they mean a lot to me,” he said. “And I like playing all over the floor, whatever they need whether it is playing outside on the perimeter making guys better or rebounding or scoring points.”

Amazingly, Mikesell is the sole survivor of his recruiting class. Both John Crosby and Xeyrius Williams transferred out. 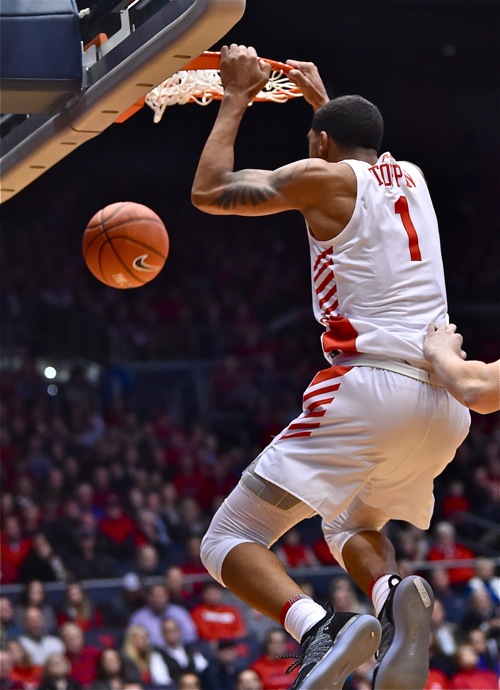 Redshirt freshman Obi Toppin led the Flyers with an assortment of dunks…and 19 points.

And his name? Mikesell. It is the same as the famous Dayton-based Mikesell’s Potato Chips Company. Asked how often he hears jokes about his name, he laughed and said, “Oh, only about every day. Sometimes I mess with people and say, ‘Yeah, my grandpa owns it,’ but really I have no relation to them. Wish I did.”

The most famous native of St. Henry is former major league baseball player Wally Post, a Cincinnati Reds outfielder. And there is a connection there. “Oh, yeah, he is my great uncle. He is my grandma’s brother.”

For the second straight game, the Flyers played without senior captain Josh Cunningham, out with a wrist injury. They have won both games, thanks to his stand-in, Obi Toppin.

He contribution Saturday was 19 points on eight of 10 shooting that included three thunder dunks.

“When you have Josh sitting out you get a little nervous,” said Mikesell. “He is one of the best players in the league (Atlantic 10) and in college basketball. We’re happy that we got two W’s this week without him. We’re hoping he’ll heal quickly and get back out there because we’re a better team with him, I can tell you that.”

Coach Anthony Grant is most definitely pleased to have Mikesell back as a starter and major contributor.

“He went through a lot last year and first and foremost I am happy for him that he has an opportunity to be back out there doing what he loves to do,” said Grant. “It means a lot to him to put on that Dayton jersey every single day.

“Sometimes when you go through what he had to go through and the game is taken away from you, you have a different appreciation for it, a different outlook. And I’m sure that is where he’s at. He values putting that jersey back on with his brothers,” Grant added.

And Mikesell is extremely, uh, relieved that he can do things these days without his mother’s help. 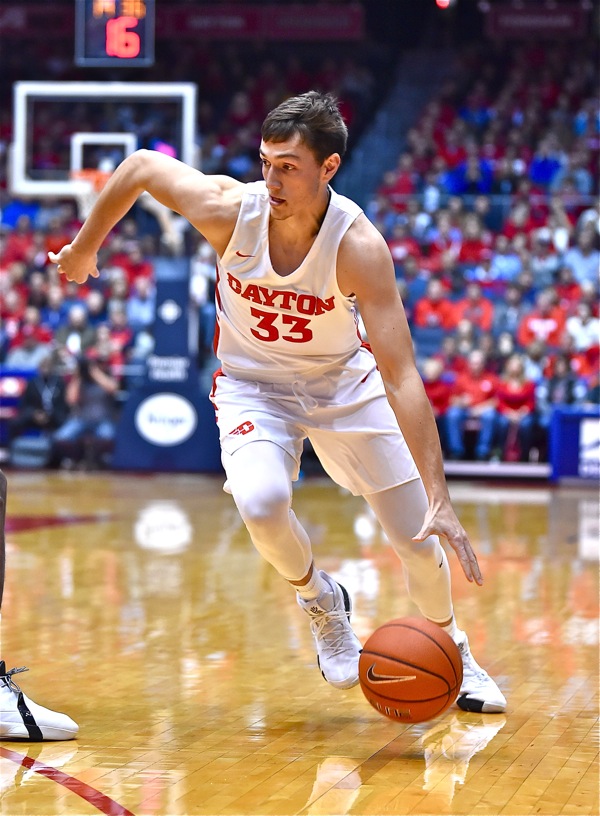