It will be one of the year’s most thrilling comebacks in any sport…New Bremen comes from two games down to overtake Monroeville, and win the Div. IV semi-final.

Fairborn – Diana Kramer had to jog her memory to recall a better comeback – a more tense and dramatic comeback than the one that delivered the defending champion New Bremen Cardinals (24-4) in Thursday’s Division IV semi-final win over Monroeville (24-4).

“I can think of some,” she said, waiting for her team to board the bus back to New Bremen.  “Coming back from 0-2 against St. Henry in the district was big, and there were some others farther back…but they weren’t the state semi-final match.  This was exhausting.”

They were so tight at the beginning you couldn’t have drawn blood.  They moved like zombies, tip-toeing around the court, tentative, and frankly it appeared that catching their next breath was even questionable. 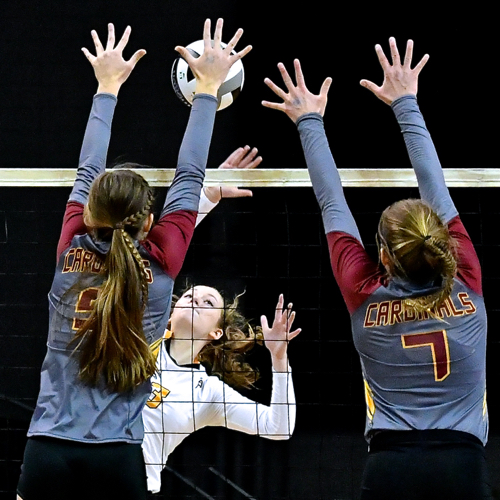 “We were terrible,”  admitted Kramer, after the gaggle of post-game reporters had left the press conference.  Visibly exhausted, she dropped her head and shook it gently back and forth.

“We were awful, the way we were playing.  Macy Puthoff has been so good for us this whole tournament, and she just couldn’t do anything.”

And she wasn’t alone.

Monroeville, a team from Huron County, was a near mirror image of New Bremen.  Aggressive in their serve, efficient in their serve-receive, they did Bremen no favors as they came out in near-flawless fashion.  They played their game, according to coach Kendra Snook, because New Bremen allowed them to spread the court, run offense, and score at will.  But the Cardinals gave them a lot of help, too, hitting balls five feet behind the end line – serving erratically, and can it be stressed enough…simply showing the stress of the moment.

“Give them credit, though,”  added Kramer.  “That’s a really good team that plays a lot like us.  Kendra is a fantastic coach and she had them ready.  They made it tough on us.”

After losing the first set, they finally awakened in the second, and actually took their first lead at 16-15 because……

“We never stopped being aggressive,”  reminded Kramer.  “That’s our style.  It’s high risk, and high reward.  That’s the way we’re going to play and some days you just take your chances on it wearing the other team down.” 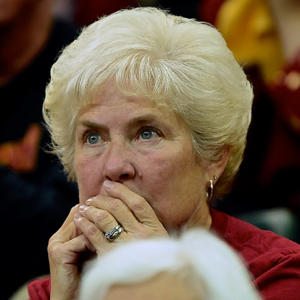 Nerves were evidently contagious as the faithful watched and wondered about the eventual outcome.

It didn’t get Monroeville in the second, as the Eagles came back from being down to tie, retake the lead, and eventually take the set, 25-23.  But you could also sense that while they led two sets to none, the aggressive style of New Bremen was taking a toll.  They knew…the Kramer and Company were not going away.

New Bremen took the lead for good with their 13th point, and Kramer challenged them in a timeout to maintain, and build on it.  They did, winning the set 25-19.

“Their serve,”  said Snook, describing the point in which the match turned.  “They were very aggressive with it in the third, they got us out of system, and suddenly we kind of lost our game and the edge that we had at the beginning.”

And, they lost the momentum of the match.  Volleyball as a game is about a lot of things, but most of all it’s about momentum.  And when they came out for the fourth you could sense that swing.  Free-wheeling and smiling with at least one win under their belt, it was a different New Bremen.

“When get down two sets like that you just talk about winning a set,”  said Kramer in the post-game.  “Then you try to win a second one, and that’s all you try to do.  They put us in some situations, and hats off to them.  But we were just  trying to win a couple of sets.” 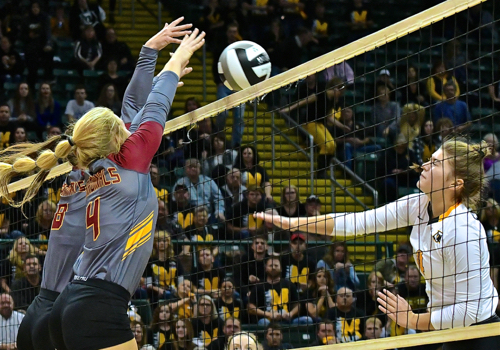 Ashton Heitkamp (#4, above) blocks at the net in the fourth set.

At 13-11 of the fourth set, senior Madison Pape served an ace right down the middle of the court that fell in between two exhausted Monroeville defenders…and you could see the air begin to hiss from their balloon.  Buoyed by that serve, and that point, they went on a run that extended their lead, they never trailed again and won the set, 25-20.

Suddenly, they had won that second set.  The match was tied.  The New Bremen crowd, which an hour earlier was trying to chew their hands off, was now howling its approval.  And when they came out of the deciding game the Cardinal players wore a broad, confident smile.

Quickly, junior Macy Puthoff, who had struggled so mightily at the outset, came up aces, and served an ace to help her team jump out to a 5-1 lead.

“Macy couldn’t do anything when we started, but by the end of the game she was the best player on the court,”  smile Kramer.  “That’s the kind of athlete she is.”

Monroeville quickly closed the deficit to 6-4, but on the ensuing point Blake Snider, who would have 20 digs for the match, had her biggest, and perhaps the best of her season.  Diving to her right she managed to get a hand under a shot to keep it alive.  A moment later Taylor Paul turned it into one of her 14 kills and the lead quickly climbed back to 10-5.  From that point on…it was game, set, and match!

“I really didn’t think about it being that big,”  said the diminutive Snider, one of the MAC’s best at her position.  “I was just doing my job trying to keep the ball alive.” 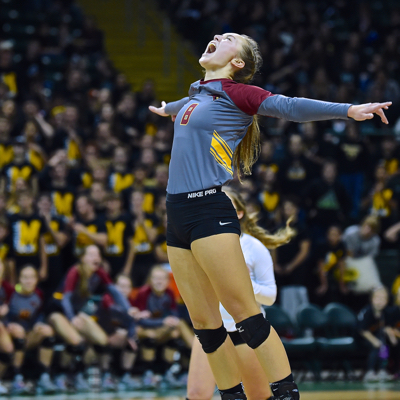 Now, they have a chance – a chance to coming back on Saturday to play perennial power Tiffin Calvert for a second Division IV title in volleyball.  And the irony – a year ago they’d never won a title in anything.  A year later, they’re playing for two in a row.

“I told people all year that these girls were tough,” said Kramer to the assembled writers.  “Were we nervous at the start?  Yes, but you writers were probably nervous, too, watching the team you came to write about.

“But I’ve told them all year, when no one else believes that you can do it, you have to believe in yourself.  And no one believed that we could do this again.”

And especially without Paige Jones, the tournament record setter from a year ago now playing at Michigan.  Jones was their crutch then, accumulating a record 47 kills in that semi-final match.  On Thursday they played in their new style, as they’ve done all year.  They spread it around.  Taylor Paul had 14 kills, Rachel Kremer had 12.  Soph Josie Reinhart had 8.  Ashton Heitkamp had 6. Macy Puthoff had 6, and Claire Pape had 8.

Defensively, they were no different.  Behind Snider’s 20 digs, three other players finished in double figures – Abbi Thieman, Kremer, and Puthoff.

So if high risk/high reward is what got ’em here, there’s no reason to wonder how they’re going to play against Tiffin Calvert.

“We watched them in their semi match (over Portsmouth Clay),”  said Kramer.  “Another team like Monroeville, kinda’ like us, that’s going to be good, and they’re going to play aggressive.”

Which apparently you HAVE TO DO at this point of the season.  All Kramer could say before she left the building was to remind people of what’s gotten them this far.  Tough as the moment, they’ve already knocked out the #1 team in the state, and like Thursday, they came back from down two sets to do it.  So anything is possible now.  Just stay aggressive. 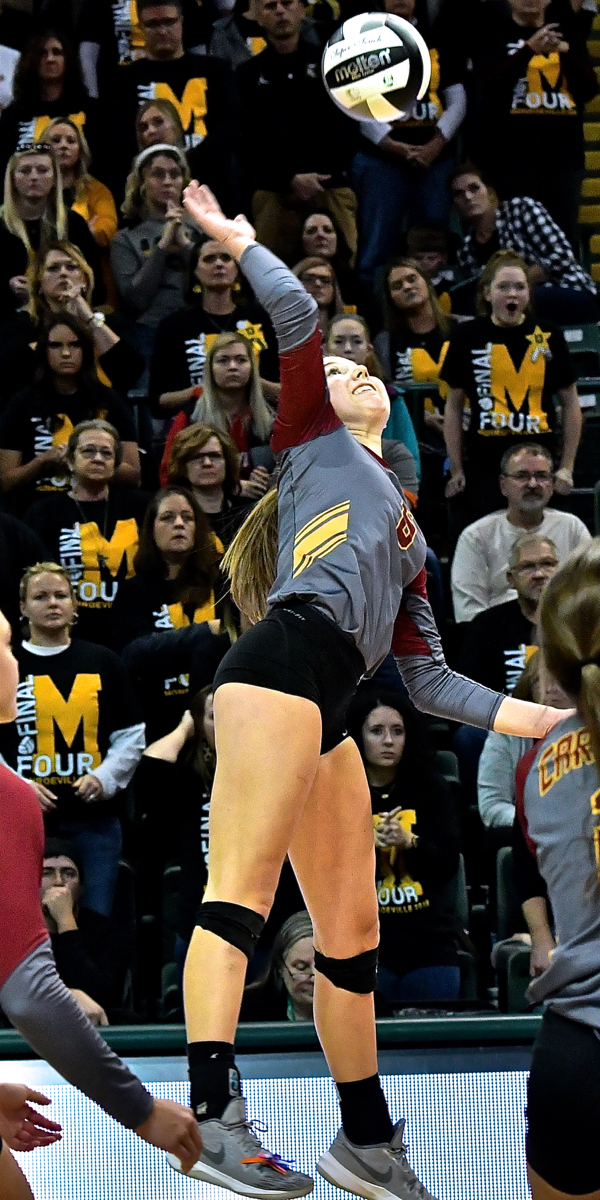 Bremen’s Taylor Paul connects for one of her team-high 14 kills. 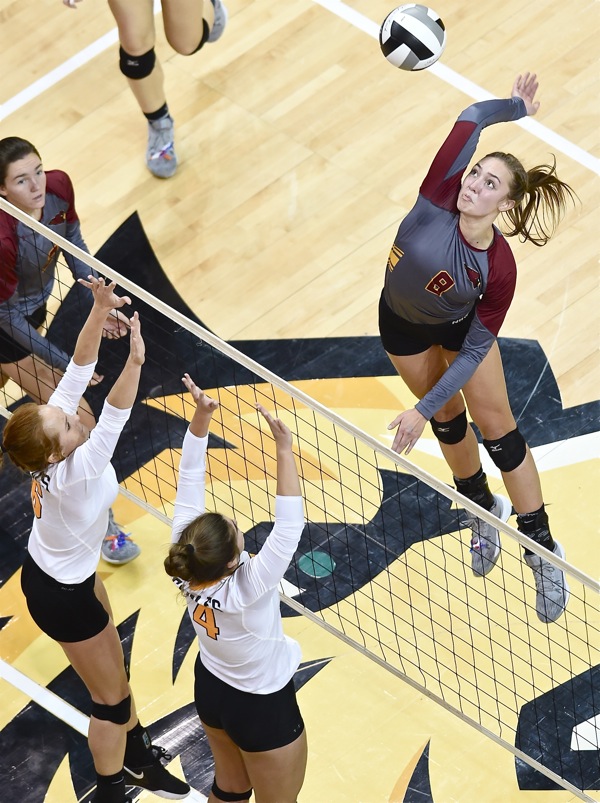