Seth Lonsway, And The Awaited….

The Buckeyes’ sophomore lefthander raised some eyebrows when he turned down the Reds’ signing offer to become a Buckeye. Now, he’s anxious to prove that the decision, and the wait for his debut has been worth it.

Columbus – At a recent game of the Buckeyes’ fall Scarlet and Gray series, sophomore lefthander Seth Lonsway leaned on the bullpen fence and answered questions – the obvious questions.

– One, the question as to his lost freshman year due to academic ineligibility…an issue pertaining to a class taken at Celina High School and its reporting to the NCAA.  And for the record, Lonsway is a solid ‘B’ student at Ohio State.

– Two, the question as to last year’s down time, and its impact on his readiness to fulfill what’s an obvious need in the Buckeyes’ weekend rotation next spring.

– Three, the question as to whether he made the right decision to be a Buckeye. He was drafted 19th by the Reds following his senior year (2017 draft) and turned down a reported six-figure bonus to sign, choosing instead to play college baseball.

– And speaking collectively, the biggest question of all – can a pitching staff stocked with freshman and underclassman arms come of age in time to make the Buckeyes competitive with the likes of Minnesota and Indiana come April? Can they pitch well enough to win the battle of runs surrendered versus runs scored?

Head coach Greg Beals shared some answers of his own regarding these very issues.

“He’s had a good fall,” says Buckeye head coach Greg Beals, speaking of Lonsway. “And obviously he’s in our plans for the weekend rotation next spring.

“His stuff is so good – the fastball, the breaking pitch.  The thing that remains for improvement is his efficiency. We’d like for Seth to throw more strikes, pitch ahead in the count, because that makes the breaking ball that much more effective when he throws it…and his breaking ball is, in my words, nasty!”

He’s obviously not the average first-year college pitcher, even a year removed – his pedigree and the anticipation of what the Reds saw and drafted, and how that might translate into Big Ten success. He carries himself with confidence, with an untold motivation to deliver because he knows what’s expected of him. And so, he’s willing to address the questions.

“It’s been a good year for me, a positive experience,” said Lonsway, his eyes never leaving the playing field recently, as junior Jake Vance (another starting pitcher candidate for next spring) worked from the Bill Davis Stadium mound.

“I worked on things – control, command, and consistency with my breaking pitch. It’s still a work in progress, but I like where I am now. I feel comfortable and I’m ready to compete. I’m anxious to go out and help our ballclub.”

And asked if he’s comfortable with the expectations, he nods and flashes an engaging smile.

He has the tools. Lord, he has the tools. Built like a headstone, his broad torso can propel a baseball in the range of the best arms in the Big Ten, currently. In a recent Scarlet and Gray outing Lonsway easily touched 94 miles per hour on a radar gun positioned behind home plate.

And for those old enough to remember, his delivery is not unlike that of Dodger hall of famer Sandy Koufax – straight over the top with a long stride that gives the impression of throwing from much closer than 60 feet, 6 inches.

The breaking ball of which he speaks is a traditional curveball, with non-traditional speed – much quicker than the average college pitcher would offer, and with a late, devastating break in the strike zone. Even the best of Buckeye hitters have become weak-kneed at its arrival at home plate. The issue, of course, is throwing it for a strike. 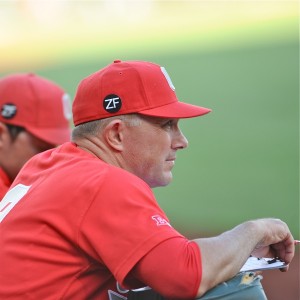 “His curve is different than others,”  says Greg Beals.  “It actually appears to pick up rotation as it gets closer to home plate.”

“His curve is different than most,” says Beals, a former catcher. “It actually appears to pick up speed and rotation as it gets closer to home plate. It has a tumble quality that others don’t have.”

And, his presence on the mound – Lonsway is not lacking of it, and shows no signs of giving in when he’s behind in the count. His attitude with every pitch is certainty in his ability to get the hitter out.  In a poor start this summer at Springfield, pitching in the Prospect League, he walked five in two innings (and hit a couple), but his willingness to compete never wavered.

“I just needed to pitch,” he would say later, a concession to the year’s lay-off and departure from routine.

And now that he’s fully engaged in a routine, he’s been nothing but impressive in fall camp.

“We started him in both exhibition games just to get him more experience against the kind of situation he’ll experience next spring,” adds Beals.

Lonsway responded, against both Indiana State and Dayton, and now looks eagerly towards taking the next step, come February. As to the question of the Buckeyes being competitive against the top teams in the Big Ten, he doesn’t back down.

“Some of our underclassmen are very talented, and I’m confident in our ability to score runs. We have some great young arms and I think some of them are going to make an impact early next year. I won’t say which ones, but some of those guys have been impressive in fall baseball.”

And can they make enough impact to help the Buckeyes win?

“You gotta’ play,” he answers. “For myself, I’m ready to go. I want to be one of those three weekend guys and it doesn’t matter if it’s on Friday, Saturday, or Sunday. Whatever they think is best for this team that’s where I want to be. But there is talent here, the coaching staff is good, and we have some experience coming back. So there’s no reason why we can’t compete.”

So, the awaited return on Seth Lonsway has looked good, as anticipated. Long on talent and desire, his personal probation is almost over. Happy to be in Columbus, over Billings, Montana, the next step is the one that means more to him than anyone else. He wants to pitch…he wants to prove he, and the Buckeyes, made the right choice. 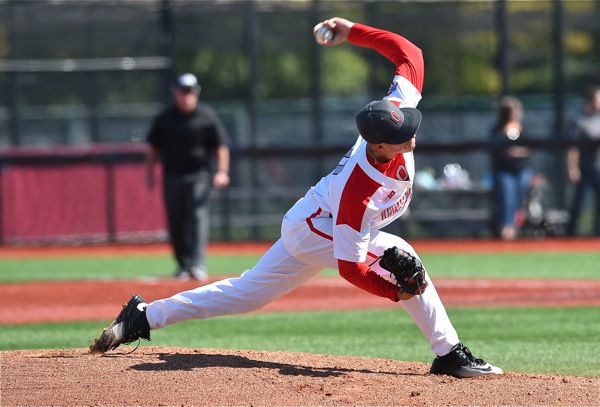 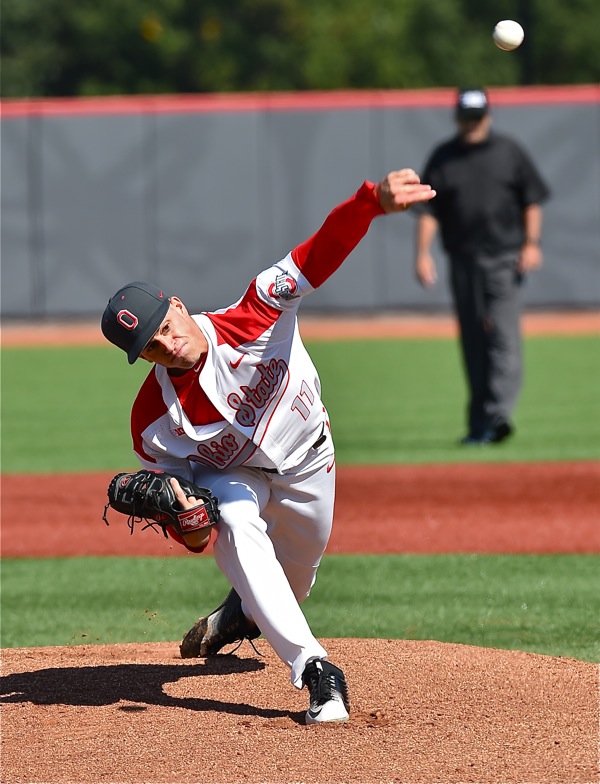 Seth Lonsway's delivery is classic...over the top with long stride that gives the impression of throwing from much closer than 60 feet, 6 inches. (Press Pros File Photos)