Hail To The Champions…Versailles Wins Div. III, And The MAC’s 130th!

They did it in straight sets, and they left little or no question about being as good as any team in the tournament.  Versailles claimed its back-to-back volleyball title, over Independence.

(Ed. Note:  Good times are worth reliving.  And to remember a highlight from the 2018 season, relive and enjoy our encore presentation of the Versailles Tigers, who capped a remarkable season by winning their second consecutive Division III title in volleyball.)

Fairborn – Outside the media press room Saturday afternoon, following his ‘concession’ time with writers, Independence High School volleyball coach Tony Messina made the gracious comment, “Congratulations to the champion (Versailles).  They earned it.”

Actually, at that very moment he would have rather been part of Loggins and Messina, because Independence is a good volleyball program – a very good volleyball program – making its second consecutive trip to the Final Four.  He might well have said, “Hail to the champions,” because in both of those trips Versailles stood in the way of Messina taking home the gold trophy!

His frustration came as a result of the Versailles Tigers (20-10) taking the title in straight sets – 25-23, 25-23, and 25-19 – against one of the most athletic and talented teams in the state.  And Messina (who’s no shrinking violet when talking about his team) knew it. 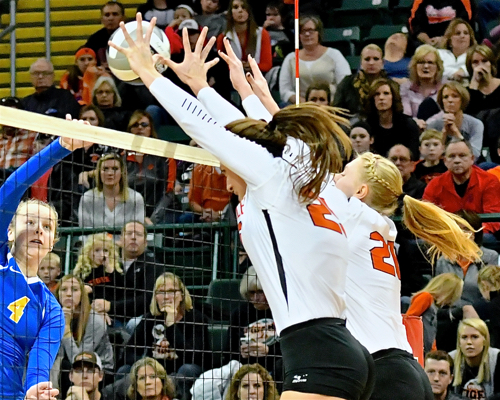 Lindsey Winner and Liz Ording team up to block at the net.

“We just had the misfortune of playing them on a day when they were about as good as they could play,”  he added to the assembled writers.  “Give them the credit.  I’ve been around for awhile (at Padua) and I’ve seen some good volleyball.  They’re big at the net, and that height is hard to overcome.  But they were good defensively, too, and that #25 (Lindsey Winner) was something else.  And they tell me she’s only a junior – a junior!”

To use his words, Versailles was about as good as they could be – the by-product of a tough season that at one point saw them 10-10, struggling at the end of September to find their way.

“Coach always told us she believed in us,”  said Liz Ording.  “And when the season was over and we had a chance to start over in the tournament we decided that this was the kind of team we wanted to be.”

They did it Saturday with blocking at the net that seemed to make Independence, another team with size, alter its shots.

They did it Saturday with defense that denied Independence one rally after another.

“We just kept getting our hands on the ball,”  said Kenzie Bruggeman.  “That’s such a credit to the girls and their mindset for being here. 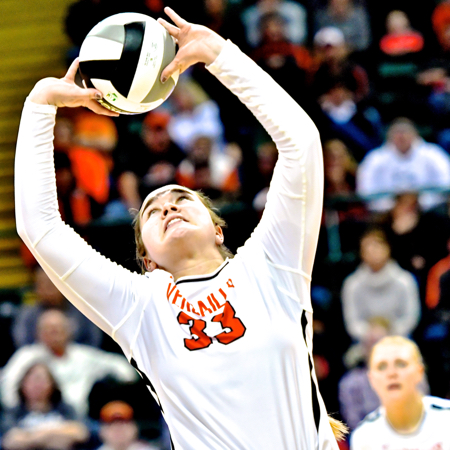 Kelsey Custenborder made it a point to part of history.  “I was a part of this last year, but it’s so much better to win it when you’re a senior.”

They did it Saturday with interchangeable parts, by necessity.  Raegan Shaffer went out in the first set with an apparent knee injury, and roles and bodies had to be rotated to account for her absence.  No problem.  They inserted Brooke Stonebraker to the lineup and played on as if it was expected.

“Brooke has been so amazing all year,”  said Bruggeman.  “She doesn’t make a lot of errors.  She does what she’s told.  I can’t say enough about her.  She did amazing.

“Today proved again why you need all fifteen girls because you never know what’s going to happen.  And for someone to step in the way she and Emma (George) did today, you can’t ask for anything more.”

And, they did it Saturday as if it was pre-ordained…that they had no other option.

“It’s especially important to us seniors,”  said Kelsey Custenborder.  “This is how we wanted to go out.  We won it last year, but it’s so much better to win it again when you’re a senior.  We’re going to remember this one.”

It only took an hour and eighteen minutes, but to Kenzie Bruggeman it seemed like forever.

“It did seem like it was long,”  she said.  “I would be thinking that the game was in the high ‘teens, then look at the scoreboard and see that it was 8-7.  That’s how contested it was.”

And in fact Independence contested nearly every shot in the first two sets, that ended with identical 25-23 scores. 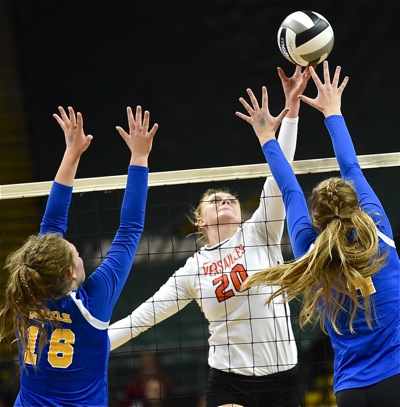 Liz Ording tips a point over the outstretched arms of Seneca defenders.

“They’re very athletic, they’re big, and they’re well-coached,”  she added.  “But we’re so accustomed to the pressure of playing the MAC that we felt like we were prepared.  We talk about this scenario every day in practice…like OK, it’s 24-23 so what are you going to do now?  Are we going to roll over or finish it out?  And that’s the mindset the girls had today.”

But to sum it up – to account for the 130th team title in the history of the MAC Conference – it was a simple as Bruggeman’s statement about not wanting for anything more.  Her team played almost flawlessly, on the one day of the year when it matters the most.

“It goes back to the mentality of the girls,”  said Bruggeman.  “At one point we had all those losses during the year, and the season could have gone either way.  But the girls didn’t want that.  They decided once tournament started that they wanted to be a different kind of team.  We just focused on getting just 1% better each day, so that we could be playing our best if we got this opportunity.  And I think the fact that we did it in three sets today shows that we did our job.” 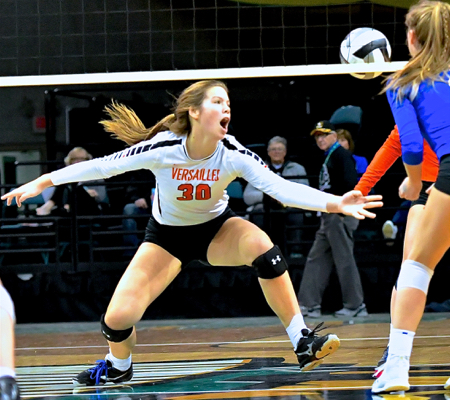 Brooke Stonebraker was outstanding as a needed replacement for injured Raegan Shaffer.

Back-to-backs are hard to accomplish, and defending champions often fall to complacency.  But in Versailles – in the MAC – the opportunity to add to such a rich legacy is something that every player covets.  None more…than senior Liz Ording.

“I was part of this last year,”  said Ording.  “But I wanted to be back here today.  So I decided as a senior I had to step things up.  I had to be better.”

And to that end…she did her job, as well.  Ten kills for the match, and a steadying influence all year.

“She’s amazing,”  added Bruggeman.  “And Lindsey Winner, every place she played she was great.  But when she got up front she just had fun.”

Winner led the Tigers, and all scorers, with 15 kills for the match. 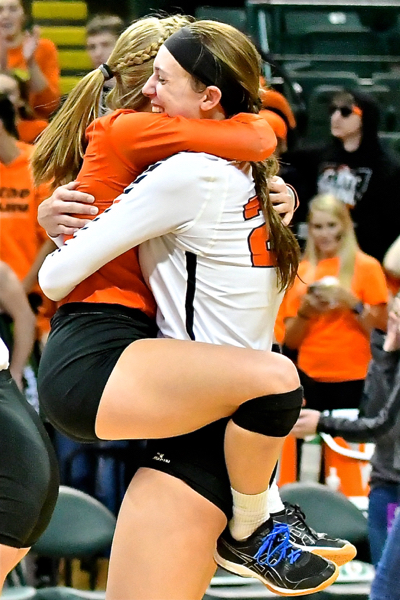 Back-to-backs are also hard for coaches to achieve, and those that do join a select group of those over the years who’ve helped establish what’s clearly now a featured culture in MAC women’s sports.  Kenzie Bruggeman joins that group.

“No, no,”  she objected on Saturday.  “I don’t know about all that.  I don’t take credit for any of it.  This is about the girls and what they decided out there today.  I knew we had athleticism this year, but I knew, too, that some of them had to grow mentally to become what they’ve become now – to have the kind of intensity it takes to accomplish this.  I’m just happy to be a part of it.  It was a dream come true last year, and now it’s just a double dream come true.”

But in fact, Bruggeman’s modesty will go unnoticed in the record book.  Win one title and your name is a footnote.  Win two and you become part of the legacy.  The legacy that saw the MAC go one for two in this 2018 state volleyball championship, and the legacy that promises to live on and on as both Versailles and New Bremen will retool for 2019 with a solid core of returning talent.

“They tell me #25 is just a junior,”  said Tony Messina as he left the arena on Saturday, speaking of Lindsey Winner.  “That’s something to look forward to if we get back here next year.”

Hail to the champions, indeed! 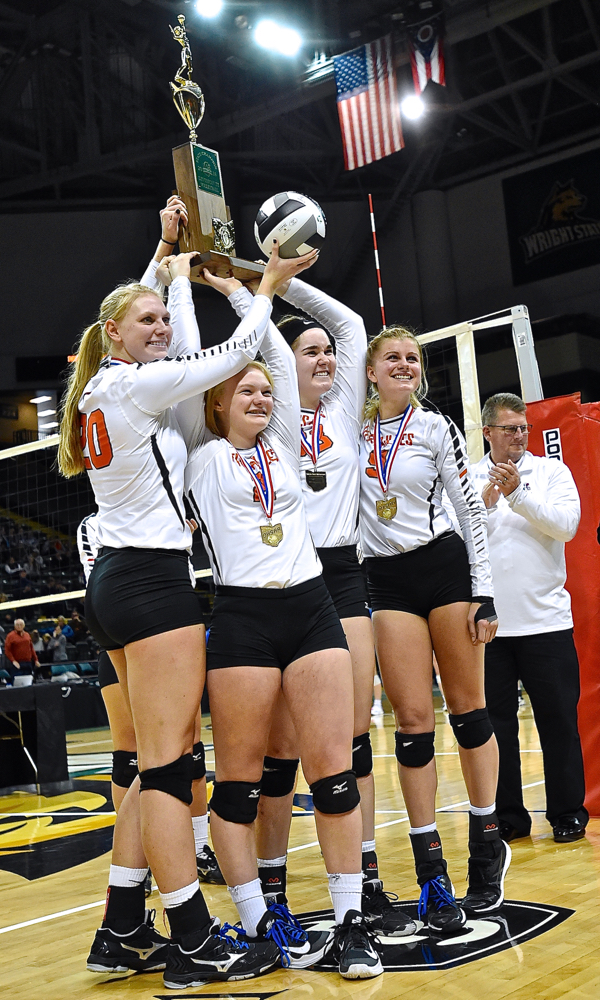 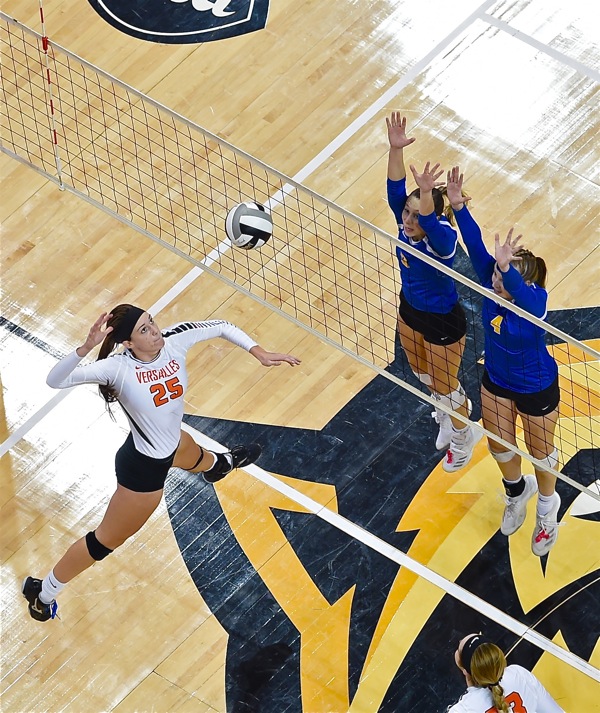 Lindsey Winner drives one of her game-high 15 kills past a pair of Independence defenders. (Press Pros Feature Photos By Julie McMaken Wright and Sonny Fulks)