Niekamp, St. Henry Far Too Much For Mechanicsburg

The Redskins ran away with their playoff opener, handling the Mechanicsburg Indians on the road behind a huge night from their star tailback.

Numbers provide a glimpse of his greatness – 125 yards rushing, 34 yards receiving, four touchdowns, our tackles for loss, and fourth down sack. All in two and a half quarters.

Of course, one man doesn’t make a team. And Niekamp wasn’t alone Friday night. St. Henry rolled into Mechanicsburg and obliterated the Indians 37-7 in the first-ever meeting between the two teams.

“Zach isn’t busting some of those runs without Jerry Fishbaugh lead blocking for him, or without our five offensive linemen,” Luthman said. “[They were] bigger and stronger, getting into some guys.”

Blowouts like that don’t happen in the playoffs period, let alone in a game between a four-seed and a five-seed.

Trust is always a big word in football. You have ten other men lined up beside you that you’re trusting to execute at a high level to obtain success.

It’s clear St. Henry’s coaches and players trusted the schemes that worked all regular season. Pound it time after time with Niekamp, keep the defense honest with a few throws from senior quarterback Sam Lefeld, then hit home runs while the opposing team is lulled to sleep and crashing inside. 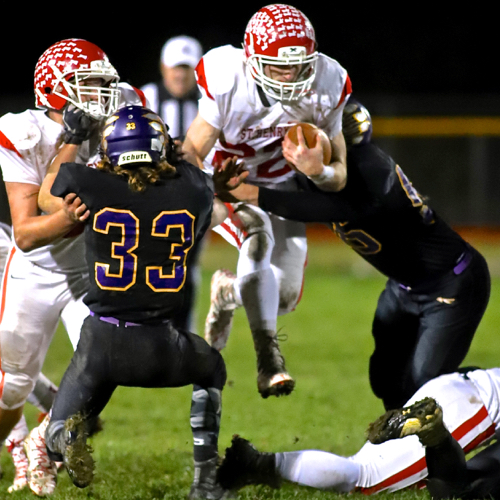 Redskins running back Zach Niekamp busts through Mechanicsburg tacklers on his way to 125 rushing yards and four touchdowns.

Such tactics were clear from the first possession. Niekamp scored on a 15-yard toss with a pair of evaded tackles to open the scoring, but it was set up by five runs between the tackles and a trio of intermediate throws by Lefeld.

Next drive opened with another smattering of inside runs. On play four Niekamp was met at the line of scrimmage third-and-two by a trio of Indians defenders. All three of them got a free ride five yards downfield to move the chains. Play five was another toss, but this time Niekamp didn’t break any tackles. Instead he ran 67 yards untouched for a score. A beautiful block from senior Jared Fishbaugh sprung the dash, putting the Redskins ahead 15-0 at the 7:34 mark of quarter two.

Making matters worse for Mechanicsburg was inexperience, youth that showed, with five underclassmen starting on offense. The opening sequence for the Indians went bobbled kickoff reception resulting in bad field position, timeout before the first play from scrimmage, false start. An offsides penalty on a PAT cost them a point early, because the Redskins lined up for two instead and punched it in.

Then, already in over its head and down 15-0, Mechanicsburg tried a backwards pass to star speedster Keith Bebout and fumbled the ball away at its own 35-yard-line. 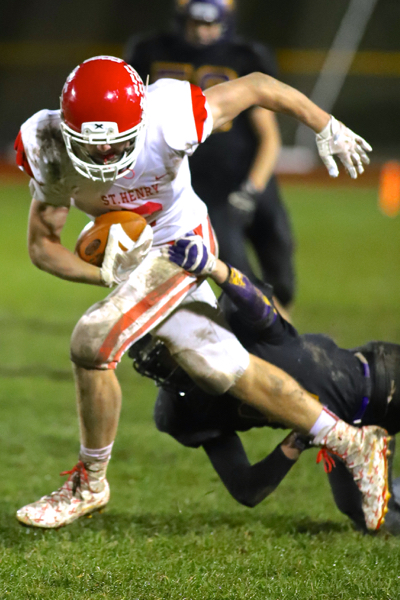 Mechanicsburg’s defense gave everything it had attempting to keep the Indians in the ballgame.

The Mechanicsburg defense gave everything attempting to keep the Indians in the ball game, bringing the Redskins to fourth-and-four right after the quick change. Niekamp lined up at receiver this time and caught an 18-yard throw for a first down. All in the house were expecting the runner to pound in from eleven yards away, but St. Henry went play action instead. Then Lefeld wheeled around and threw it back to Niekamp, who walked in for a score against an unsuspecting back seven. A successful fake PAT made it 23-0, 4:23 left first half.

“Really happy to come out and start fast,” Luthman said. “We wanted to be urgent, because we thought we had a size advantage on these guys so we tried to press that early.”

Finally, Mechanicsburg got a drive going. Bebout hauled in a 37-yard streak up the left sideline. The next play picked up six yards and the Indians were looking to get back in the game fifteen yards from paydirt.

Niekamp burst into the backfield for a two-yard loss on the next play, then senior Dylan Froning hauled in the first of three St. Henry interceptions.

No problem for the Indians though, who forced a fumble the following snap and got the ball back in the opposing red zone.

They backpedaled a yard in three plays, then Niekamp came through with the fourth-down sack.

Up 23-0 nothing early in the third quarter, Lefeld found senior receiver Jay Knapke 25 yards downfield on a corner route to set up a two-yard scoring dive by Niekamp. 30-0, running clock, JVs in.

The Redskins are moving on to the regional semifinals, a date with top-seeded Coldwater.

Luthman wants to see more from his defense as the postseason progresses.

“I thought our tackling was suspect.”

Either way, St. Henry can take this night to enjoy a statement playoff win. Not only for themselves, but for the MAC. 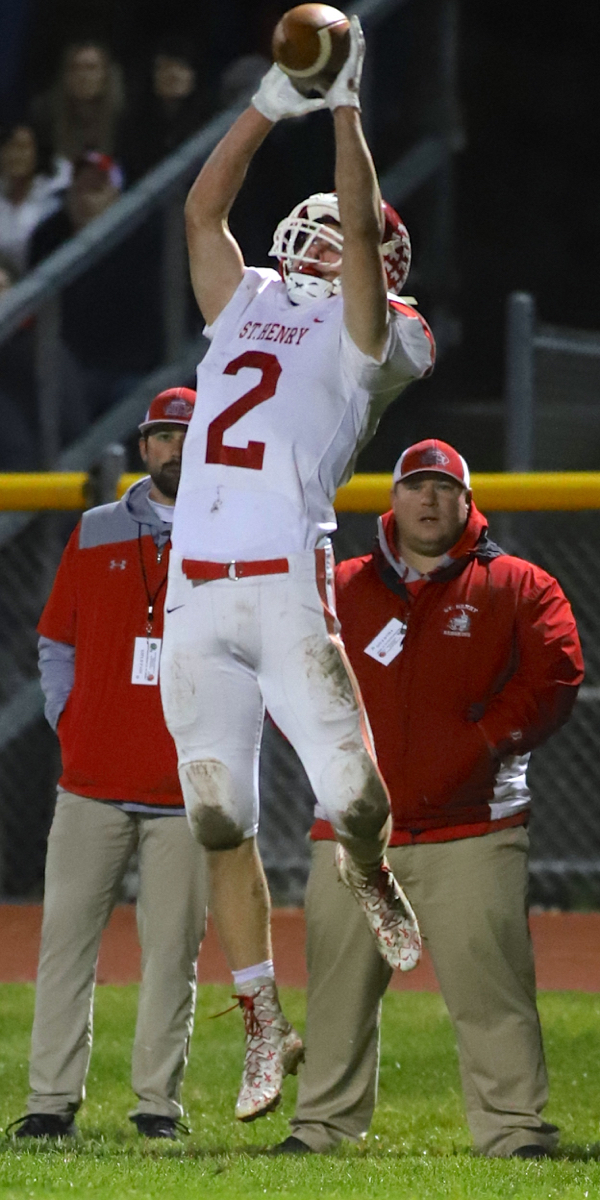 St. Henry's Jay Knapke leaps to bring down a pass during the Redskins's Friday win over Mechanicsburg in the opening round of the Division VI playoffs. (Press Pros Feature Photo by Don Selanders)