A Night Of Remembrance, As Marion Serves Notice…

Marion Local extended the state’s most enviable streak at the expense of Spencerville in the opening round of the Division VI playoffs.  And lest you doubt, the champions did more than remind.

Maria Stein – Actually, it was supposed to be better than this – more competitive.

That is, the 8-2 Spencerville Bearcats were profiled as a team that could run the ball, eat clock, and challenge the Marion Local Flyers in the manner of some MAC teams that had done so during the regular season.

It didn’t turn out that way.  Marion ran up 371 yards of offense while holding Spencerville, ground game and all, to about half that, en route to a 55-7 opening round rout Friday night in the Division VI playoffs.

There was no hangover from last Friday’s disappointing season-ending loss to Coldwater.

There was no issue, or question, about deficiencies in manpower and experience.

This was a night of reminding, and remembrance, as the ten-time state champions served notice to the region and state that they may be different than Marion teams of the past, but come playoff time they’re still the team that owns the state’s most enviable win streak.  In his twenty seasons as head coach at Marion, Tim Goodwin has played in nineteen opening round playoff games…and has now won them all!  The only year he missed was in 2004, when they didn’t play at all.

This win was complete, on both sides of the ball.  At 10:18 of the first quarter, on their first possession, Nolan Habodasz ran 14 yards for the game’s first score to give the Flyers a 6-0 lead after a blocked extra point.

Quickly, however, Spencerville answered with a five yard touchdown pass at 1:42 of the first quarter from Dalty Prichard to Kale Lee to take a short-lived lead at 7-6.

A minute later Habodasz scored again from two yards out, after a Matt Rethman runback of the kickoff, to give Marion a 13-7 lead. 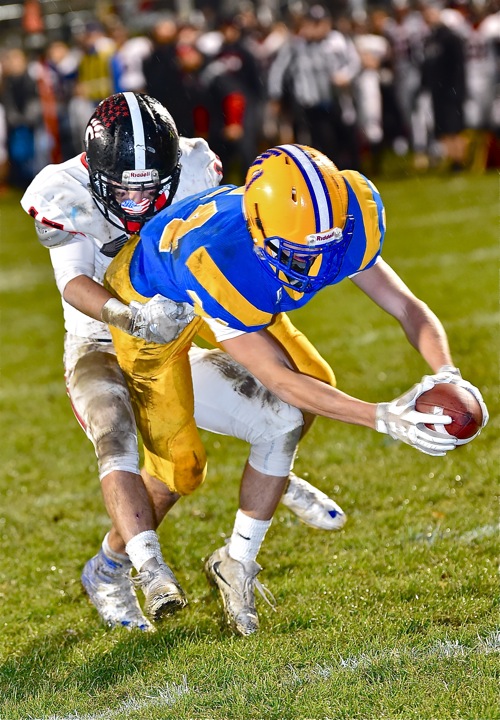 Marion’s Nick Tangeman stretches the ball across the goal line after a 36-yard first half touchdown reception from Nate Bruns.

That set off a scoring frenzy – by Marion – and a sequence of turnovers by Spencerville that saw the Flyers score 35 unanswered points before halftime…and prompted the Bearcat faithful watching to cast their thoughts towards basketball.

Matt Rethman scored midway through the second quarter on a 16-yard touchdown pass from Nate Bruns.

Minutes later Brandon Fleck took advantage of a Spencerville fumble to score on a 6-yard run.

On the next Spencerville possession Marion’s Derek Wilker blocked a punt by the Bearcats’ Seth Schwartz to set up a 14-yard touchdown pass from Bruns to Kyle Francis to make it 34-7.

Then, after another change of possession, Bruns cranked it up for 36 yards to Nick Tangeman and a touchdown to make the score 41-7;  and if that wasn’t enough, thirty seconds later, after another turnover, Habodasz scored his third touchdown of the half to effectively end things, 48-7.

“That was a tough end of the half for Spencerville,”  said Tim Goodwin after the game.  “I’m not sure about how it all went down, but I know we recovered a couple of fumbles, had the blocked put, and scored 21 points there in the last two minutes before halftime.  That’s just tough on anyone.”

Mercifully, they played the second half with a running clock, and Marion’s second unit gave a good account of itself, pitching a 24-minute shutout while Jacob Hartings scored the game’s final touchdown midway through the fourth quarter to conclude the 55-7 win.

“I thought our defense played well,”  added Goodwin, a notable understatement.  “That was a pretty good running team, so I thought the defense gave us something we’ll try to build on.”

While the game itself held no drama, the most significant statement was the reversal of efficiency from last week’s loss at Coldwater, a game that saw Marion commit 14 penalties and lose for the first time in 36 games largely as a result of self-denial.  Friday’s outcome was the result of a complete turnabout. 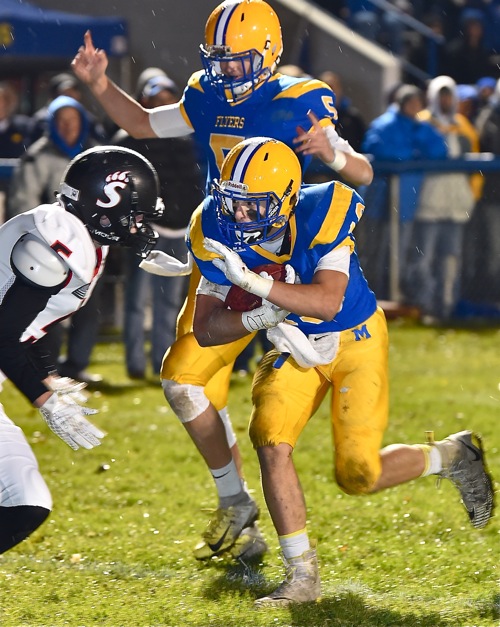 Nolan Habodasz scores the third of his three first half touchdowns in Friday’s win over Spencerville.

“This felt good, to get that taste out of our mouth,”  said Goodwin.  “We take pride in scoring late (before the half or the end of the game), but you can never count on getting the turnovers like we did before the half.  I know on the flip side that’s demoralizing, so it had to be real tough on Spencerville.”

It was a game of redemption following last week’s disappointment…and it was a game of remembrance.  More than one admitted the hollowness Friday of not having having Stan Wilker and assistant coach Dan Thobe on the sidelines for another playoff opening.  Wilker, a Press Pros colleague and former Marion athletic director, passed away in June.  And Thobe, fighting his own battle with cancer, was saluted between the first and second quarters as the Booster Stadium crowd came to its feet with a tribute of applause.

And without question the state will watch now for the next four weeks to see if Goodwin and the Flyers can reprise its perennial playoff magic in quest of one of Ohio football’s most coveted marks.  An eleventh title come December would tie the all-time mark for championships held by one school, that of Cleveland St. Ignatius, set between 1988 and 2011.

“We have plenty of talent,”  said Goodwin, asked about the prospects of meeting that lofty challenge.  “We just have to play Flyer football.  I was really pleased with our defense tonight, against a team that has been a good running team this year.  We just have to play our game and not do stupid stuff.  We watched the tape of last Friday on Saturday morning and that was tough to do, given the disappointment.  But at the end of that film session we said that’s it, it’s over, and now we have to move past that.”

With one streak broken, the Flyers now focus on building on Goodwin’s 19th first round playoff win Friday, the longest such post-season mark among any active coach in Ohio.

“Obviously we’ve had a lot of good teams over the years, and coming out of our league you’re going to be the favorite most of the time.  If there’s a bitter-sweet aspect to moving on, we don’t have to play another MAC school next week (the Flyers will meet Lima Central Catholic), and we saw LCC earlier this year on film when they played St. John’s.  So we’ll be ready to play.” 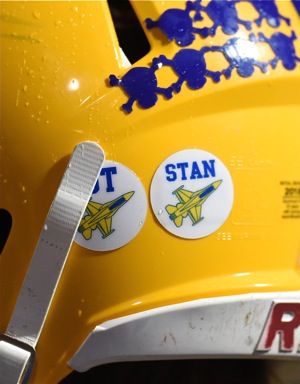 It is without a doubt Tim Goodwin’s time of the year, playoff football and the mental and physical challenge of preparation for the unfamiliar and the unexpected – the best the state has to offer.

“Personally, this time of the year is precious because I know what it takes to get to this point,”  he offered.  “That’s a lot of work by a lot of people and you want to take advantage of that.  If you don’t play well and you lose your last game you’ve got a whole lot of things to check off to get back to that point come next year.  So, it’s just precious.”

As the community of Maria Stein has been made better by the influence of men like Stan Wilker and Dan Thobe, so too has Ohio high school football been enriched by the standard set presently by Tim Goodwin and the Flyers – nineteen consecutive first round wins, ten state titles in nineteen years, and the anticipation of their sharing what’s perhaps the most cherished achievement of all…the all-time mark for championships won.

On an opening weekend of lopsided games, and games of little competitive significance, Marion Local took a step closer Friday to renewing the relevance of the OHSAA’s crown jewel of competitive achievement, a reflection of the community and conference.  What they have in Maria Stein is to be envied – revered by some, but respected by all.  It is, in Goodwin’s words…just precious! 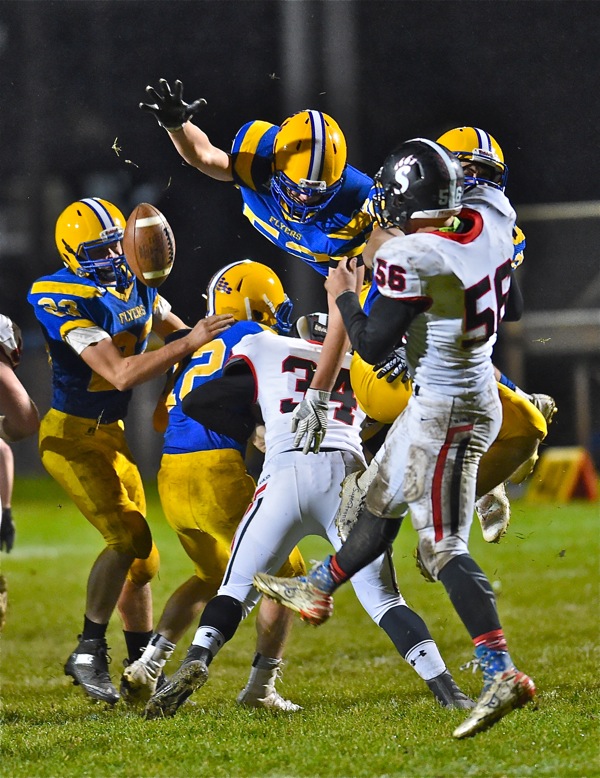 Devastating Two Minutes...Derek Wilker's block of a Spencerville punt (#52, above) was part of a two-minute flurry that saw Marion Local score 21 points before the half. Marion would go on to win the game, 55-7. (Press Pros Feature Photos by Sonny Fulks)