A spirited comeback landed the Jackson Center volleyball team one step away from the Division IV state tournament. But that last step? Well, it’s a doozy. 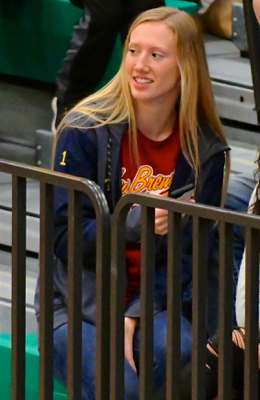 Former New Bremen standout Paige Jones took time away from the Michigan Wolverines to check on her former team.

Jackson Center’s last trip to Columbus came in 2015 and 2016 when the Tigers won it all both times. A victory in Saturday’s 2 p.m. regional final would give the Tigers the confidence to do it again. The team collected some of that Thursday against Russia.

The teams traded wins with Jackson Center winning the first game 25-11, Russia taking the second 25-23 and Jackson Center the third 25-19. The fourth seemed destined to follow the same pattern until the Tigers rallied from being down 15-8. 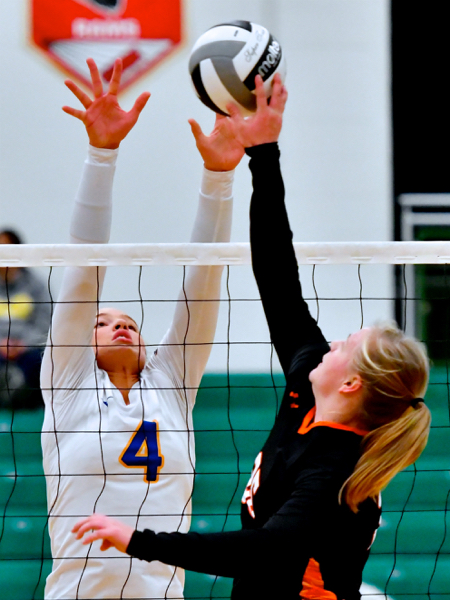 They tied it at 16-16 and again at 18-18. Jackson Center took the lead for good on a well-placed tip from sophomore Deja Wells that just landed just in along the sideline. Senior Raquel Kessler’s kill made it 20-18. It went to 22-19 when Russia’s block attempt deflected out of bounds. After a kill by Russia sophomore Ashley Scott, Jackson Center senior Caroline Frieders delivered a kill that the Raiders’ defense sent ricocheting back toward the bleachers for the 23-20 lead.

On the next serve, Jackson Center’s kill attempt was long … but Russia’s comeback was short lived. An official ruled the ball was off the Raiders’ fingertips. Instead of leading 23-22, the call reversed the score – and the momentum – to put Jackson Center up 24-21. Kessler then ended it with another rocket for the game-winning kill.

“It’s kind of been our forte. I think the league has been laced with five-set matches,” Jackson Center coach Kim Metz said. “I think that’s something that both of us are prepared for. On a night like this we fully expected this was going to be a five setter.”

She’s hoping to go the distance Saturday, too.

Fort Loramie coach John Rodgers offered his advice on what it takes to beat New Bremen. Doing it is another matter. The Redskins had not lost a set in four previous tournament matches entering Thursday. The Cardinals have a way of doing that to teams. 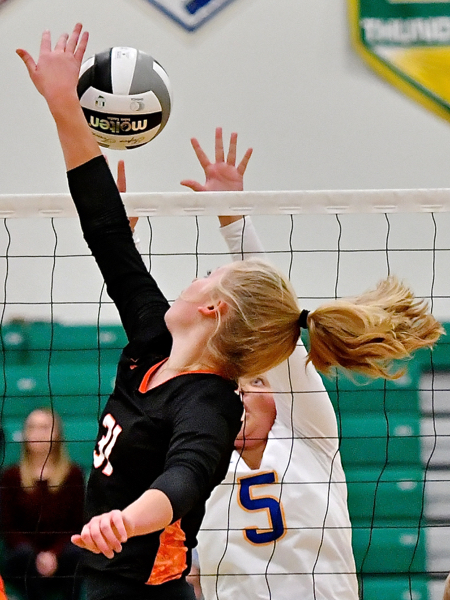 JC’s Sarah Clark  (in black) sneaks a dink in on Russia’s Morgan Wenrick.

“When you look at New Bremen they are solid across the board. Both Jackson Center and Russia have the ability to do some damage. But are they going to be able to be able to do it consistently? That’s going to be the catch right there.”

Fort Loramie tied New Bremen 18-18 in the first game. The Cardinals scored the next five points.

Fort Loramie trailed 11-10 in the second game. The Cardinals closed it out with a 14-4 run, punctuated by sophomore Claire Pape’s hard kill that drove a Redskins player backwards.

Fort Loramie tied the match 3-3 in the decisive third game. The Cardinals scored 11 of the next 13 points to put the Redskins’ team back on its heels and won it on junior Macy Puthoff’s block at the net.

“I’m not disappointed with our girls at all. We battled every step of the way,” Rodgers said. “New Bremen, they just have the ability to keep the pressure on the whole time. That’s something championship teams do. You can’t take a breath against them.” 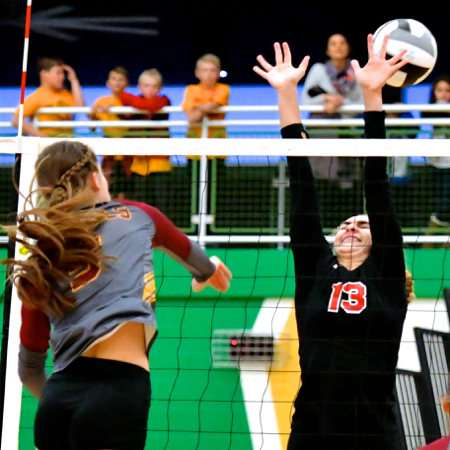 Puthoff led the Cardinals with eight kills. Pape had seven kills, Rachel Kramer and Taylor Paul both had six and Ashton Heitkamp and Josie Reinhart five each in that balanced attack Rogers talked about. Madison Pape had 17 assists and Abbi Thieman 14. Blake Snider made eight digs.

“Our setters do a good job of putting the hitters in good position to score,” Kramer said. “Last year Paige (Jones) was clearly the best player on our team and maybe even in the state. This year we’re very even. Everybody has their game. It’s fun to sit back and watch because you never know where the ball is going.”

But Kramer and Metz do know this … one of their teams is going to the D-IV state tournament after Saturday. 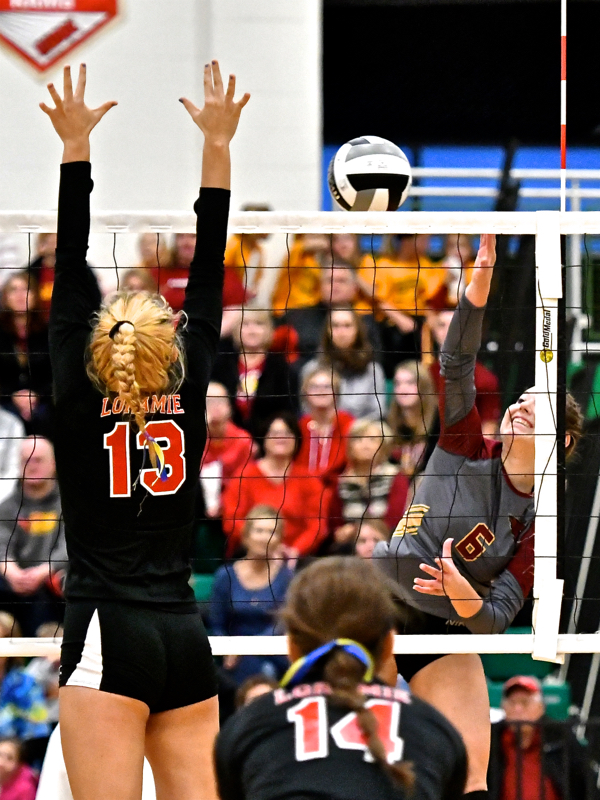 New Bremen’s Taylor Paul tries to get one of her six kills past Fort Loramie’s Maya Maurer. 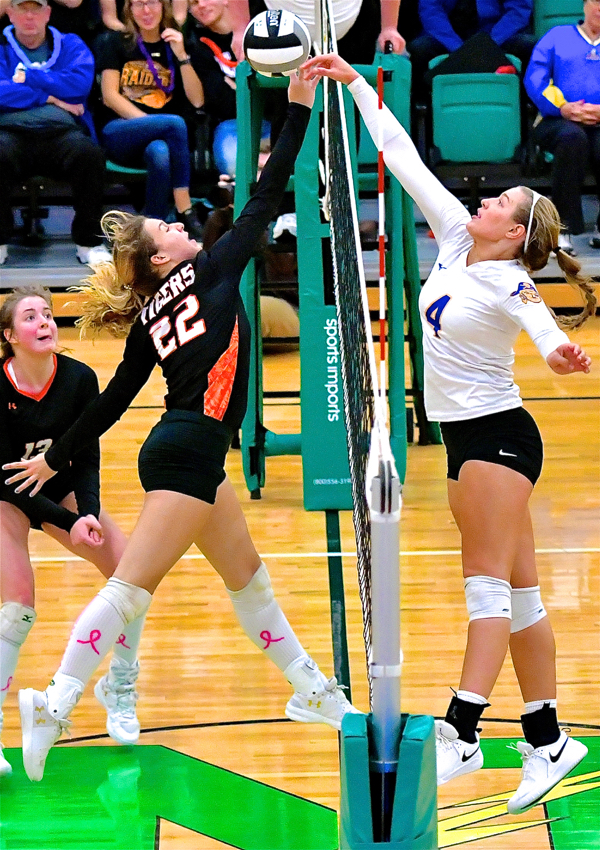 Jackson Center's DeJa Wells (above, left) and Russia's Laurissa Poling go one on one at the net. (Press Pros Feature Photos By Julie McMaken Wright)