Anna saw its tourney journey come to a halt after a fast start, while Versailles late-season momentum continued to build.  The Tigers swept past Miami East in three straight to advance to Saturday’s regional final!

Kettering, OH – For about a half hour Thursday night Anna coach Kelli Zumberger might have had the urge to pinch herself…to make sure she wasn’t dreaming.  Because you see, it’s every coach’s dream to have your team come out hitting on all cylinders – playing confidently, efficiently, and having fun.

And for the first set of Thursday’s Division III regional semi-final with Marion Pleasant (24-3), the Anna Rockets (18-9) played like a dream come true.  They were aggressive on offense, hustling on defense, efficient on their serve/receive…they were having fun.  And they won that first set impressively, 25-16. 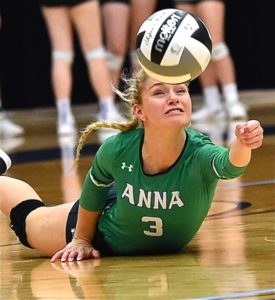 Anna’s Liz Michael stretches to save a point in Thursday’s regional loss to Marion Pleasant.

But midway through the second set they seemed to lose that momentum, that confidence…as Marion overtook them 19-18 for its first lead in the match, and then proceeded to sweep the Rockets out of the tournament in three straight games – 27-29, 23-25, and 18-25.

To be sure, Marion Pleasant is a fine volleyball team, athletic, quick to the ball on defense, and nearly flawless in their serve/receive in those last three games.  The forced pace, hit off quick sets at the net, and their efficiency began to wear on Rockets.  And in volleyball, when you lose your edge – your momentum and confidence – it’s very, very hard to get it back.  Such was the fate for Zumberger and Anna. 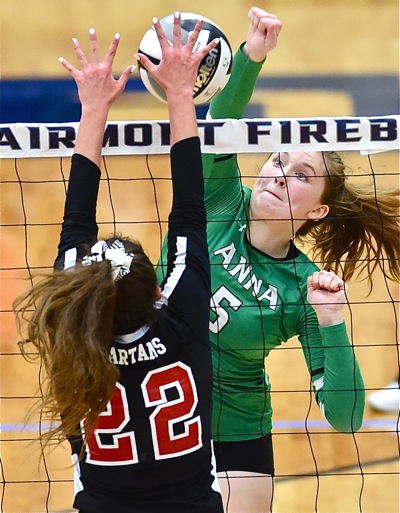 “We played tough,”  said Zumberger afterwards.  “I told the girls there’s nothing to be ashamed of because we played some awesome defense tonight.  We had some shortcomings, but we worked hard, no matter what happened.

“We came out with good energy in the first set and Marion Pleasant responded to that, like good teams do in the regionals.  And them responding the way they did made it that much more challenging for us.  There were things we could have done better, but give them credit for being a regional final team.”

Disappointing, of course.  But to have won 18 games against the kind of schedule Anna plays, Zumberger spoke with pride over how far they came on their final night of the season.

“I can’t call this a bad loss for us, because like some of our others when you consider the kind of schedule we play it’s one of the toughest.  All the teams we lost to this year are phenomenal, and they’re either still playing or just recently lost.  So losing in the regionals to Marion Pleasant tonight is nothing for us to be ashamed of.”

If the glass was half empty regarding the Shelby County League’s representative…thirty minutes later that same glass was overflowing for the MAC Conference and the Versailles Tigers, the defending champions in Division III!

Playing as well as you can reasonably expect to play with so much on the line, the Tigers (17-10) blistered former two-time state champ Miami East in straight sets…25-11, 25-21, and 25-16 to advance to Saturday’s championship round with Marion Pleasant. 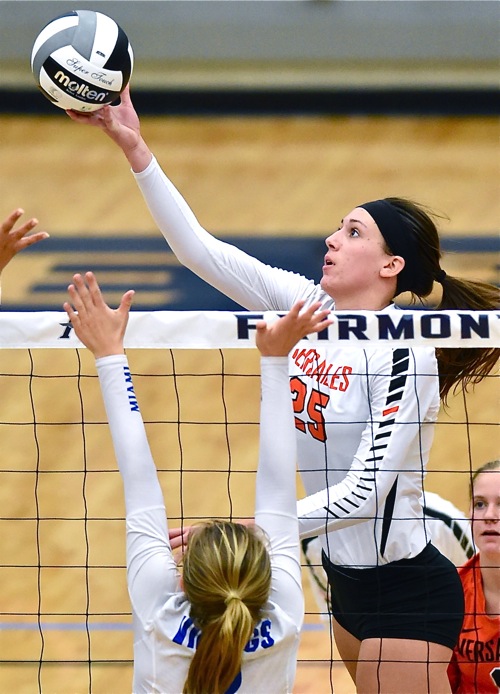 Lindsey Winner was tremendous at the net, scoring and defending, in the Tigers’ regional win over Miami East.

But some perspective is in order to fully appreciate the Versailles win, for this is a team that has resurrected itself from an early season habit of jerking defeat from the jaws of victory…and a series of miserable Saturday losses to non-conference opponents.  When we last saw them in mid-September, their Saturday loss in five games to Troy on that day appeared to be the low point of their season.

“We need to learn how to win matches like this,”  said coach Kenzie Bruggeman at the time.  And while they lost five of their next eight matches, on October 9 they flipped their season to win their next six entering Thursday’s regional, including a five-set win over #2-ranked Fort Recovery.  Lessons learned, apparently.

There are very few volleyball matches where momentum doesn’t switch from one team to another during the course of play.  But such was the case Thursday as Versailles came out hot, got hotter, and never allowed East to seize the momentum. They played that well…serving, hitting, and defending aggressively, while leaning on their size and experience at the net with Lindsey Winner, Elizabeth Ording, and Raegan Shaffer.

Winner and Ording were like twin towers, denying everything within reach at the net, while driving kill after kill through the teeth of the Vikings’ defense.  Collectively, and individually, it was by far their best, and most timely performance of the season.

“We definitely felt like we had the momentum and we weren’t going to give it up,”  said Winner outsider the Versailles locker room.  “Our offense was good, our defense was good, and we had focused on blocking all week in practice, because when your blocking is there it’s hard for other teams to make the plays.” 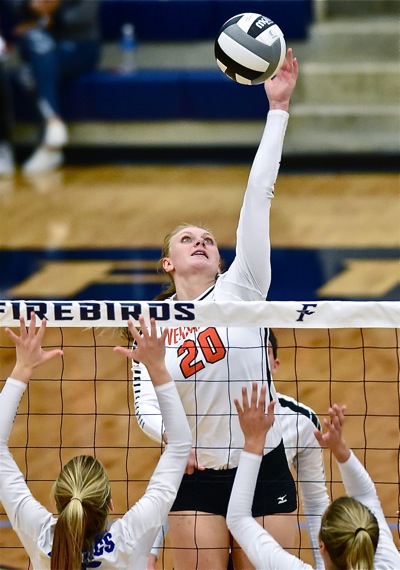 Liz Ording reaches to drive a point over the top of the Vikings defense.

There wasn’t a lot of joy, or energy that Saturday in Troy, in contrast to the way Versailles played Thursday.  Everything was up, amped as if suddenly they found the same magic that propelled them to last year’s Division III title.

“We wanted it, I wanted it (tonight),”  said Liz Ording.  “We just had to take it.  We talked about it before the game, that we were going to take care of them in three.  This is tourney time, we all know it, and we all want to go.  So that’s the mindset we had coming in.  Put your put on the gas pedal because every team from here on out can take it from us.”

“Our serving,”  added Kesley Custenborder.  “We’ve been working so hard on our serving, and being aggressive.  And our blocking was very good tonight because we’ve been doing a half hour of blocking every day in practice.  That showed tonight and it’s awesome to see that from everybody.”

Kenzie Bruggeman oozes optimism.  And from that dark Saturday in Troy, and the five losses that came after that day, she never lost sight of the potential in the group.  Her only fear was…that they’re run out of time before they found it and put things all together.

“I told them throughout the year to never be satisfied, because we’ve been such an up and down team,”  said Bruggeman.  “We played well, and then we wouldn’t play well, and it would be within the same match, or the same game.  We’ve worked on the mindset since then, we’ve trained that way in the latter part of the season, and tonight it was fun to see us come out and play like this. 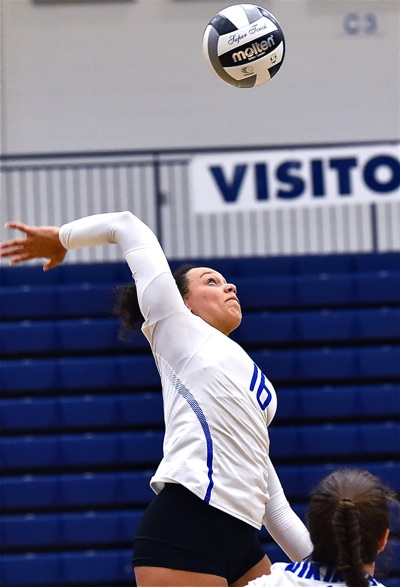 “We’ve really honed in on our skills in practice, and we keep repeating to the girls that we’ve prepared them for every possible situation.  The know what they need to do, just trust the process and rely on their training.  It’s given us confidence and when you have that confidence it gives you joy, and energy, and momentum…all the things we displayed tonight.

“And Elizabeth Ording…I can’t say enough about her because she’s just so poised.  She was even getting kills tonight on out-of-system balls because she adapts so well to situations.  She’s had the ability all four years but it hasn’t always come to her.  But she works so hard, she’s respectful, she’s learned and she wants to get even better.  She wants to perfect her game.”

Admittedly, for the longest time this year defense of their title seemed an afterthought, so up and down were the Tigers.  Now, since Troy and the spate of losses thereafter, it’s not such a far-fetched notion.  Suddenly, Versailles and their new mindset are just one win away from returning to the Final Four.

And just in time.  No one was thinking about Troy, or those days against Coldwater, or New Knoxville, or Jackson Center on Thursday.  All that was on anyone’s mind was one more game with Marion Pleasant.  One more win, and the unthinkable…at least back then.

A chance to repeat. 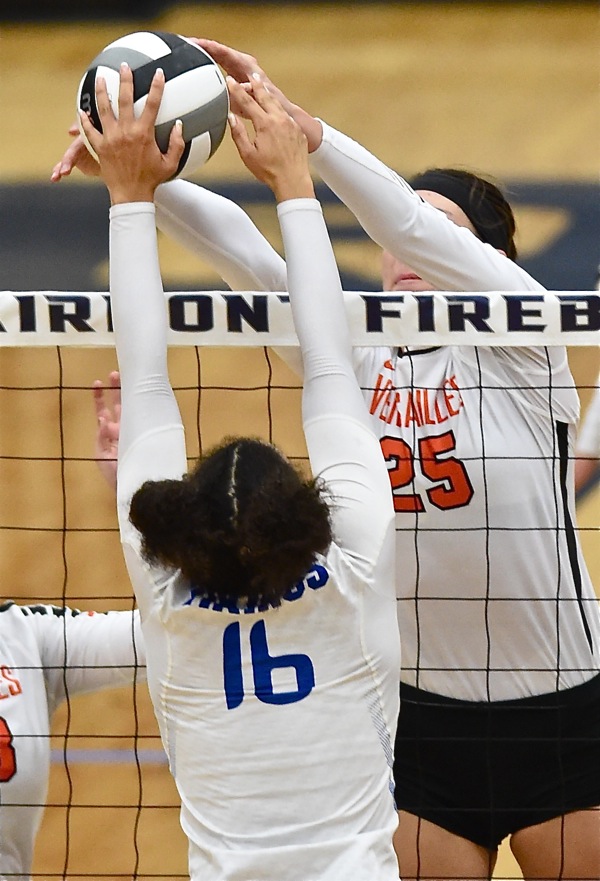