Hoard: What I’d Change? And Bring Back Street and Smith’s…Man, How I Miss It!

The things I’d change about contemporary sports? Some addiction by subtraction in one particular area, but if I had my way I’d bring back a favorite publication missing from the days of my youth.

I thought about this for a good long time and I kept coming back to one thing: the guys in the broadcast booth, especially those on the national front.

I’ve grown very weary of the current crop, who tend to go on and on trying to impress us with their knowledge of the game, their street “cred” and how way cool they are. Plus, I’m not real wild about those bad fourth grade haircuts – those cuts that look like it’s picture day in grade school back in 1962. (Back then those cuts cost a buck-and-a-half. Today, I wouldn’t hazard a guess.

Certainly, there are some really good guys working out there these days: Joe Buck and John Smoltz come to mind immediately. Neither Buck, the son of Hall of Fame announcer Jack Buck, and Smoltz, the Hall of Famer and former pitcher, fear silence. They do not spew. They allow viewers to see and digest what they’ve seen. They augment what we see without drowning us in sport-speak.

We are blessed here in Cincinnati and have been for years. Way back we had Waite Hoyt and later came  Marty Brennaman, a Hall of Fame announcer, the late and beloved Joe Nuxhall, and more recently Thom Brennaman, Marty’s son, and Jeff Brantley, the former major league reliever.

I could continue to spew-on about the national gaggle of play-by-play boys and so-called analysts for paragraph after paragraph, page upon page but I will keep my own council, keep it short and,  bet–no less–that I’m preaching to the choir.

Besides, when I was thinking about this story idea I started realizing how much I missed something that’s long gone and was once a very large part of the sports world.

Lord, Lord how I miss the old, and original  Street and Smith’s magazine.  Odds are that if you are younger than 45 or 50 you have no idea what I’m talking about. That’s bad because you really missed something.

Street and Smith’s was a bible for sports fans, young and old alike. They put out an issue before every season, and way back when, there were only three: baseball, football and basketball. That’s it.

It was page after page of black-and-white photos and short stories on every team and their best players.

My favorite issue was the basketball issue and over 50 years later I can vividly remember stories and pictures on players like Guy Rodgers at Temple, Clyde Lee at Vanderbilt, Ron Bonham at Cincinnati.

I studied the photographs hoping to learn something from Dayton’s Donnie May—my favorite—or those guys coming up at Michigan: Cazzie Russell and Bill Buntin. I remember a story about a big skinny guy who played at Miami, of all places, a guy named Rick Barry. He was throwing a chest pass in his photograph and he looked way too weak to play against the likes of Chet Walker at Bradley or John Stallworth at Wichita State. 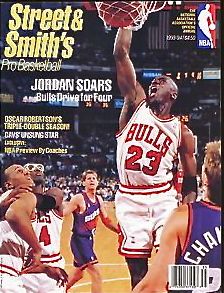 In Indiana, where I grew up, it was the basketball edition that we all cared about most.

Believe it or not in the 60s on our farm in southern Indiana, we could get college basketball games on three different television stations, and we only got three—two out of Louisville and one out of Indianapolis, and that one required that someone–me, on most occasions–go out and turn the antenna.

I can still hear my dad yelling from inside, “To the north damn it. To the north.”

We got Louisville games, when they placed in the old Missouri Valley Conference, which included Cincinnati, Wichita State, Bradley and St. Louis. Kentucky games came in on another channel, so we got games from the SEC, and on the third—Indiana and the Big Ten. It was like cable before cable except for that damned antenna.

Thanks to Street and Smith’s I knew a little bit about Loyola when they ended UC’s string of National Championships. I’d read about Gerry Harkness, Les Hunter and Vic Rouse.

When Texas Western beat Kentucky for the National Championship, I knew a little bit about Bobby Joe Hill and Harry Flournoy, and I recognized that that game marked the beginning of the end for Kentucky coach Adolph Rupp.

His “Rupp’s Runts” lost that game and he lost Wes Unseld to the University of Louisville. Times were changing, but Rupp was changing too slowly for his own good or Kentucky’s.

Of course, these same pages held stories on the pros, too: Oscar Robertson and Elgin Baylor, Bob Cousey and Tommy Heinsohn, Sam Jones, K.C. Jones, Jungle Jim Loscutoff  and Gus Williams, one tough cookie; Zelmo Beatty, Bob Pettit and Cliff Hagan, all in St. Louis with the Hawks. And how about Tom Gola with the Knicks. Saw him at The Gardens in Cincinnati, smooth as fresh cream.

Always, there were the stories on Bill Russell and Wilt Chamberlain, but not who was best but how different they were, and there was so much more: Dolph Schayes, SiHugo Green, Hal Greer, Gene Shue, Bailey Howell and, or course, Jerry West.

I could go on and on, but—you know what—I’ve grown weary of those who don’t know when to shut up.

If you ever had a Street and Smith’s and poured through those pages, I’m sure you will remember it as fondly as I do, and miss it just as much as I do.

If not, it’s worth a trip to the library. No foolin’ about it.

“Bunkers” is proud to sponsor coverage of the 2018 OSU Football on Press Pros Magazine.com. 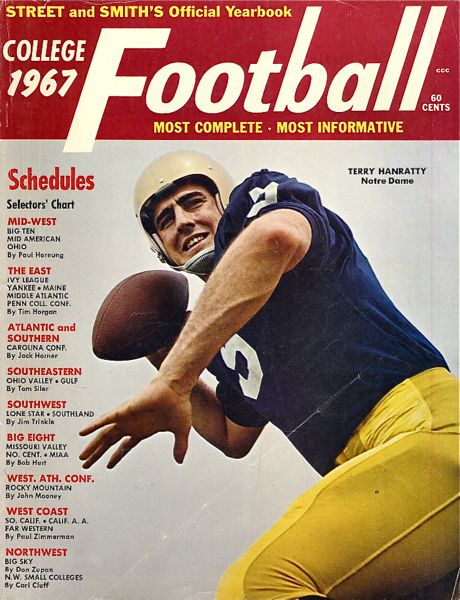 There was a time when the annual Street's and Smith Yearbook, for football, baseball, and basketball, was so eagerly anticipated that every schoolboy had his money saved to buy one. (Press Pros File Photos)