In front of a packed bi-partisan house, St. Henry and New Bremen served notice that regardless who won…the Division IV title game, by rights, was played in the Van Wert district final.

And of course, you’ll pardon the play on words because New Bremen, like St. Henry, wears red.

But in a bigger sense, Rosenbeck and the Redskins were red-eyed afterwards because it must have felt like they had just lost the state title in Division IV…in the district final game!  And to belabor the point, red-eyed for the way they lost it.

Down two games to none, New Bremen came storming back to win the third, blew out St. Henry in the fourth, and then hung on as St. Henry battled back to tie the deciding fifth game at 10-10, then 13-13, before losing the final two points, and the match, 15-13.

It was a scenario that New Bremen coach Diana Kramer had warned about all season long – that her kids were tough, both physically and mentally tough, and largely looked over following last year’s Division IV title and the graduation loss of the state’s top player, Paige Jones.  But Thursday night they proved it, battling back from a two-game deficit to wear down St. Henry, physically and emotionally, and reminding those who watched, as well as the state, that until someone can beat them they’re still the reigning champs, and more than capable of playing like it.

“This was for all those who said we couldn’t do it,”  said Kramer afterwards.  “We heard all summer how we weren’t going to be good.  We don’t have Paige Jones anymore.  We’re going to finish in the bottom of the MAC.  Glad you enjoyed last year because it’s not going to happen again this year.  And my message to the kids all summer has been, ‘When no one believes in you, believe in yourself.’  Because that’s the only thing that matters.” 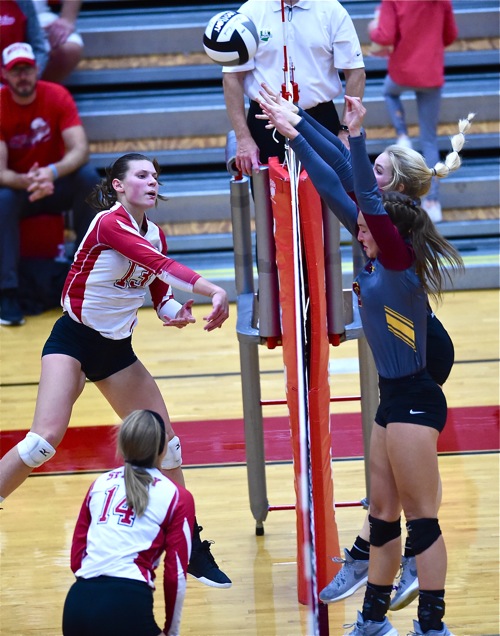 Action at the net…St. Henry’s Hannah Bruns hits into the teeth of the Bremen defense in the pivotal third set.

And now, with the district in their pocket, with a record of 21-4, none of that does matter.  They move on to the regional round of the tourney at Northmont High School on Thursday with a full head of steam, that same edge of confidence they had WITH Paige Jones, and by demonstrating that by beating the #1 team in the state the title will again, for at least another week, go through New Bremen.

They did it with what’s now become a predictable script.

They were tough at the net, especially after the first two sets, when blocks and ricochets began going their way.

And, they were resilient.  After St. Henry started the first game by scoring the first five points, New Bremen served notice of their mental toughness by coming back to score the next six, as if to say, “Game on.”

They were aggressive, as always – serve and receive, hitting, and defense.  And as the match wore on they seemed to relish the pressure while their energy seemed to wear on St. Henry.

After starting slowly, things seemed to turn for Bremen in the third set, when Kramer called upon a sophomore, Josie Reinhart, to do as Macy Puthoff did as a sophomore a year ago in the regional semi-final…give them a spark. 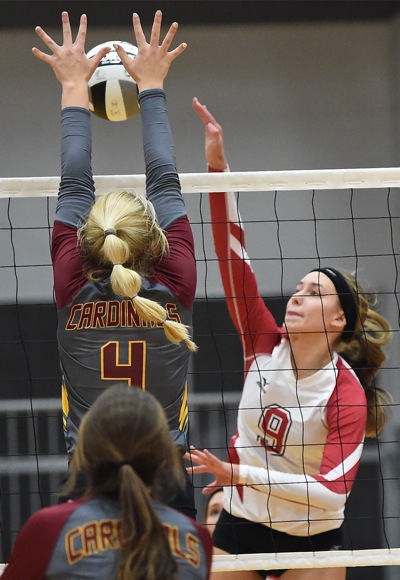 “In the third set nothing was going our way,”  said Kramer.  “We weren’t scoring any points, and I took a chance and I kept Josie Reinhart in to serve, and she delivered three aces in a row.  It gave us the momentum, and honestly, we never gave it back for the rest of the match.”

It was a point that St. Henry’s Tricia Rosenbeck would admit, as well.  The momentum turned, and the Redskins could never stop what became an avalanche of points and confidence.

“I had no idea,”  said Reinhart afterwards.  “I haven’t been serving that much in practice lately, so when she threw me in I thought, ‘Oh my gosh, just get it over the net.’  I did not expect to go on the run that I did.  But I’m just so proud of our team for pulling it off.”

Coming back from two sets down is never easy, but it wasn’t out of the question, either.  What is they say…when the going gets tough, the tough gets going?  After letting no fewer than six balls fall in bounds behind them in the first set, and innumerable hitting errors into the net, it would have been easy to have believed the nay-sayers – that they couldn’t play high stakes volleyball without Paige Jones.  Rachel Kremer begged to differ.

“We knew we could come back because we had been in that position before,”  said Kremer.  “We were in a similar position last year and we came back and won, so this was like a repeat.  We knew we could do it.”

“Josie’s serving was really good, and it was a turning point of the match,”  added Taylor Paul, who led the team offensively with her 14 kills.  “Her energy helped get the rest of us excited.  It picked me up and suddenly I began making plays.”

In spades.  After fighting back to take the third set, 25-20, New Bremen swept through the fourth like Hurricane Michael, at one point outscoring St. Henry 10-1 to win, 25-13.

“We knew how to play because we’ve done it before,”  added Kremer.  “We had nothing to lose, so we had to leave it all on the court. 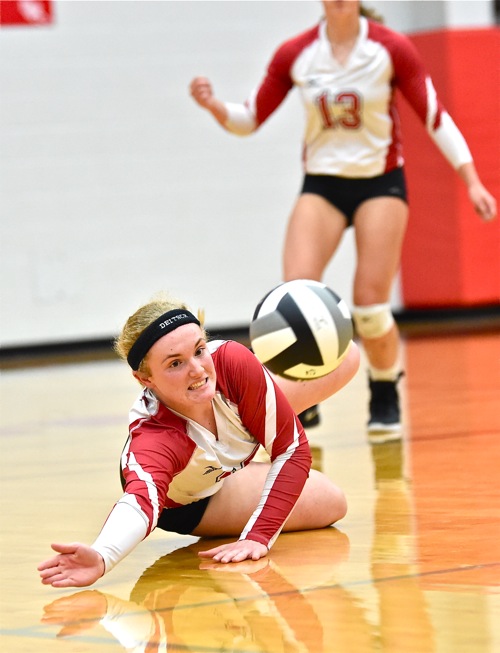 St. Henry’s Carleigh Deitsch strains to get to a Bremen shot in the first set.

And this, to be sure, is like no other district final in the state.  Entering Monday’s semi-final round, all four teams – all MAC teams – were ranked in the top five, state-wide.  It is cannibalistic, in a sense, when you consider that only one can advance, but any of the four on a given day is capable of winning the Division IV title.

“It’s exhausting,”  said Diana Kramer.  “Because we ended the season with straight-set losses to Fort Recovery and Coldwater, and there wasn’t a single person that believe in us.  So in practice last week I sat them down and said, ‘You need to give me nine days…nine days of everything you have.  If you do that we’ll walk away with no regrets.’  And somehow, nine days later, we found a way.  It’s physically, mentally, and emotionally exhausting, and the sad thing is that only one team out of this district gets to walk away with a smile on their face.” 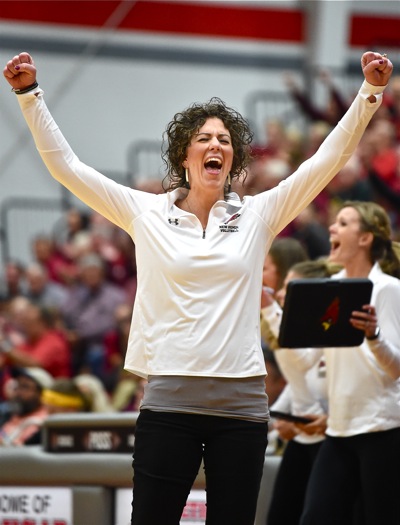 Diana Kramer gets caught up in the moment as her Cardinals defied the odds to win.

St. Henry was equally deserving, to be sure, bowing out of the tournament with a 22-3 record and impressing throughout the season as being one of region’s most athletically talented groups.  And with only five seniors, they’ll take this experience as motivation to make an even stronger case for themselves in 2019.  MAC teams remember the good, to be sure, and they also remember squandering a two-game-to-none advantage.

But New Bremen is deserving, as Kramer puts it, for being tough enough to take the punch with those losses at the end of the season, and then come back to survive what may yet prove to be their most difficult challenge of the year.

“We’re deserving,”  assured Kramer.  “We’re worked so hard in the off-season, during the season, with the way we came back to fight, I could not be prouder right now.”

And league commissioner Don Kemper had a right to be proud, as the respective communities of New Bremen and St. Henry packed the spacious Van Wert gymnasium to the rafters, and afterwards displayed the kind of sportsmanship and spirit that makes the competitive experience such a valuable learning tool.

Everyone it seemed, was wearing red.  And everyone, in the end, was equally of respectful of the fact that only one team did get to leave with a smile on their face.

But they’ll all be back on Thursday.  They always are.  Cousins, nieces, and nephews…it’s all the same.  It’s become the most admirable of traditions.  If there’s a title at stake, chances are it’s gonna’ go through the MAC.

And they’ll all be there to see it! 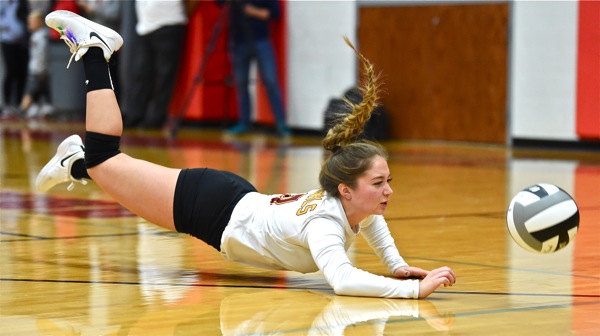 Rachel Kremer said it, “We had nothing to lose, so we had to leave it all on the court.”  Libero Blake Snider shows how (above).

Wilson Heath is the official sports medicine provider of the New Bremen Cardinals. 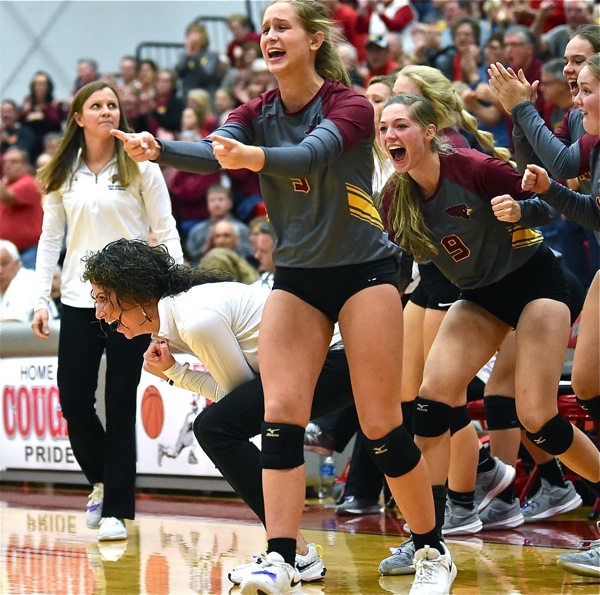 Match point...Reaction was swift and predictable at match point...as New Bremen did the improbable, coming back from a two-game deficit to knock off #1-ranked St. Henry. (Press Pros Feature Photos by Sonny Fulks)