In Monday’s All-MAC district semi-final, St. Henry and New Bremen rose to the occasion and played their best to advance to Thursday’s Division IV final.

Van Wert – The irony, of course, as one onlooker said Monday night, “It’s a shame that two of these teams had to lose.  Any of the four could win the state title in Division IV.”

And woe to other regions of the state.  He was probably right.

In the second match, #3-ranked New Bremen, the defending state champs, defeated #2-ranked Fort Recovery in straight sets for an even stranger twist – 25-20, 25-20, and 25-21.  The irony here is that just ten days ago Recovery beat New Bremen in straight sets in regular season play, and they don’t forget easily in the MAC, especially when there’s a title at stake.

And lest you missed something already, that’s right…all four teams in Monday’s district semi-final were ranked in the state’s Top 10 in Division IV, and were playing each other just to get out of the district.  Pity the poor losers, Marion Local and Fort Recovery, because had they survived it’s hard to imagine someone in a county other than Mercer and Auglaize beating them over the next two weeks.  But such is life in the MAC.  It’s a little bit cannibalistic!

As to the rankings themselves, Marion Local proved that on a given day someone else’s opinion is worthless, as the Flyers held St. Henry’s feet to the fire for five sets in a dramatic, exhausting exhibition that wore down both teams, as well as the packed house that watched.  Eight points turned out to be the biggest deficit of the match and it was the Marion’s winning margin in the second set. 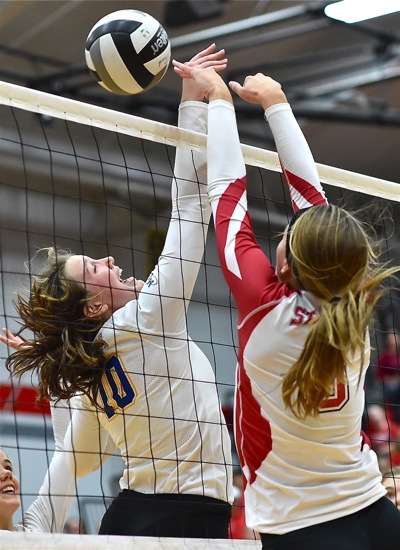 The other four sets were actually closer than the score might indicate as the athleticism of St. Henry and Marion made it hard to distinguish at times  – who was #1, and who was #5.

“It’s the tiredest I think I’ve ever been,”  said St. Henry’s Hannah Bruns, afterwards.  “I know I was huffin’ and puffin’ and I think we were all really tired in the fourth and fifth games.  But we came through and pushed our hardest because we wanted this so much.”

The pace was frenetic, as both teams went after each other at the net like Ali and Frazier.  Punch and counter-punch, and then Bruns, or Ashley Siefring, for St. Henry, would land a haymaker.  For Marion, it was largely the same, with Aubrey Thobe and Alana Pohlman (among others) landing the heavy blows.

St. Henry took a two-games-to-one lead after three sets and it appeared that they did have the edge in momentum.

But Marion came back in a gritty effort to tie the four game at 20, and then blasted their way to an eventual 27-25 win to set up the climactic fifth, and deciding game.  Their momentum carried over as the Flyers jumped out to a 5-point advantage and appeared to have things going their way.  The people in blue and gold, behind the Flyers’ bench, were smelling upset.

But St. Henry clawed its way back, point by point, to eventually tie the game at 10-10…and at that point mental and sheer physical drain seemed to take a toll on Marion Local.  The Redskins took five of the next seven point to win the match and advance. 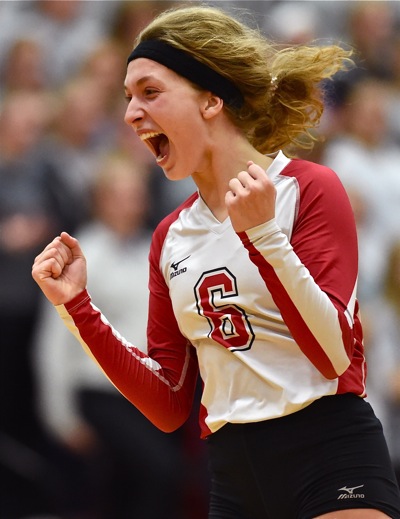 “I don’t know, we just found a way to keep fighting, and we had a chance to give up numerous times there in the fifth game and they just kept plugging away.  People kept stepping up in a big way – Addy Vaughn had some big swings and helped get us some momentum there in the fifth.  Carliegh Deitsch was serving some great balls that got them out of system.  We just found a way to fight and claw and beat a really good Marion team.”

And was fatigue actually a factor…with that much adrenalin in the house?

“I don’t know,”  added Hannah Bruns.  “Kudos to Marion because I’m pretty sure that’s the most amazing match they’ve ever played.  They were really phenomenal.  We played really good, too, but the pace was just back and forth, back and forth, and they were making shots and throwing fists at balls everywhere, diving on the floor…we were hitting our hardest and our defense really came through.  It was really crazy.”

That’s all she could say.  She had no voice left and excused herself to go join the rest of her teammates and recuperate, leaving one to believe that it’s impossible to run into another team that competitive for the remainder of the tournament. 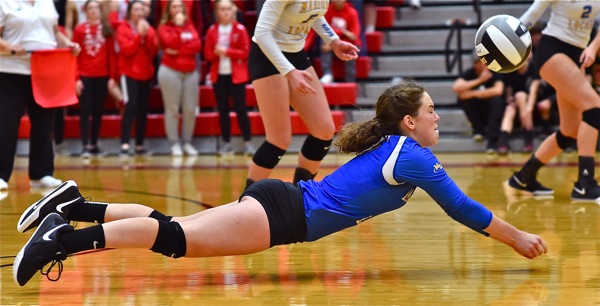 Carrie Fesenmeyer dives to save a point for the Flyers in Monday’s match with St. Henry.

And Rosenbeck would know, because Fort Recovery was one of just two teams to best St. Henry during the regular season – in five sets two weeks ago.  And to further fuel Recovery’s fire and ascent to the #2 spot in the rankings, there was that win over New Bremen five days later.  No team entered the tournament with more momentum and confidence than the Indians.

But New Bremen was prepared Monday for a rematch –  rested, and ready to protect their pride as the reigning champs.  In a shocking outcome, the Cardinals took down Recovery in straight sets, and looked every bit the part of a champion in doing it. 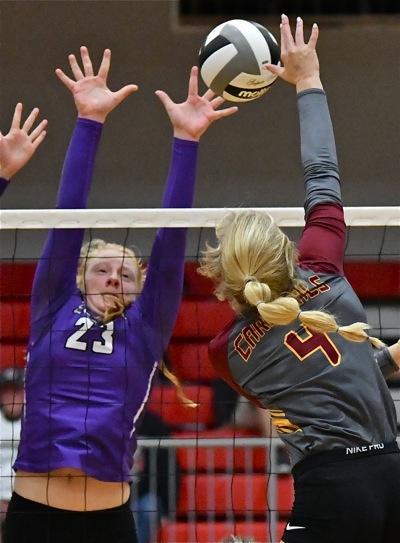 “I mean, yesterday we had our best practice of the season,” said Kramer.  “And I felt good coming into tonight’s match because I knew if we stayed aggressive and confident we could pull off [in some people’s opinion] an upset.  But we expected to win.  We expect to win every game we play.”

In deference to last year’s team, this edition of the New Bremen volleyball is perhaps even harder to prepare for, even without Paige Jones.  They spread around the the responsibility for winning, and that’s clearly evident from the box score.  Taylor Paul had 10 kills Monday…Ashton Heitkamp and Rachel Kremer each had 7…Claire Pape and Macy Puthoff each had 5.  You get the idea.  And on defense five players had five or more digs, totalling 40 as a team.

“We played with a lot of confidence tonight,”  added Kramer.  “We had nothing to lose coming in.  Literally, two weeks ago they (Recovery) just made us feel like the worst volleyball team in the world, and that’s a credit to them.  They’re a great team and they’re very well coached.  But we came out with intensity, and we responded. 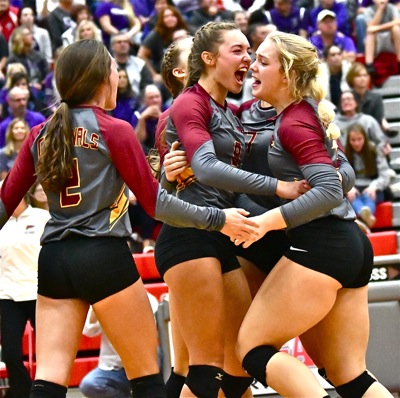 “This was really cool,” said Macy Puthoff, who probably had her most complete, and best performance of the 2018 season.

“Getting the momentum early was really important, and I think we played our best game tonight.  Our big hitters, Claire Pape and Ashton Heitkamp did a great job, and our defense was back there to back us up.  So this was a good time,”  she concluded, smiling broadly.

Of course now it’s on to Thursday, and if Monday was Ali-Frazier, then the round 2 matchup with St. Henry would be akin to Ali-Foreman – out of the frying pan and into the fire.  20 and 4 now for the season, one of the Cardinals’ losses came against St. Henry back in September (3 games to 1) in a match where the Redskins were simply better.  Aggressive in serve and receive, and athletic on defense, they played New Bremen volleyball better than the Cardinals did.  Now 22-2 on the year, and ranked #1, St. Henry stands in exactly the same spot that Bremen did a year ago.

“I can’t think of anyone who played bad tonight,” said Kramer, making a final assessment of her win over Fort Recovery.  “And that’s what it’s gonna’ take from here on out.  We have to be a really, really good team.  We can’t be individual, we have to buy into our system.

And that system is?

It worked for them last year, but it’s also worked this year for Tricia Rosenbeck and the Redskins through 24 games.  Now Kramer hopes the second time, this year, is the charm.  Having lost to them already, she has nothing to lose.

Not until Thursday, anyway, when heavyweights collide! 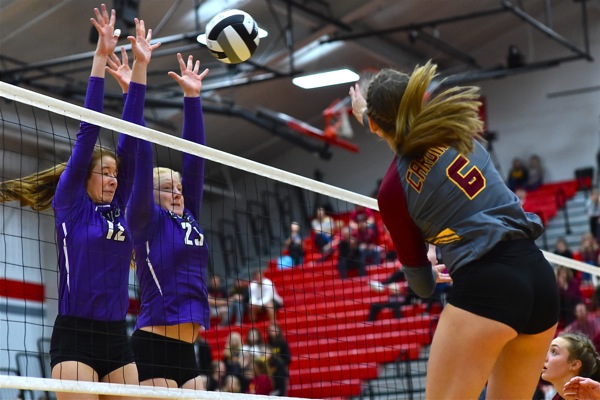 Taylor Paul (#6, above) ignites one of her team-high ten kills in Monday’s match. 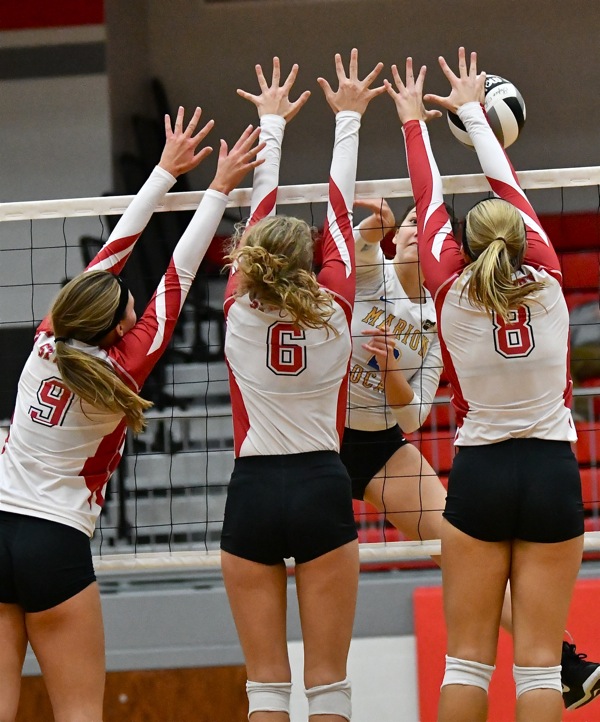