Welcome Stadium should’ve been named Flyer Stadium Saturday afternoon…for the day with all the debris flying around during the UD – Drake football game.  Everything was flying except the Flyers’ offense over Drake’s goal line. DAYTON — If the University of Dayton football team didn’t realize that the ‘D’ in Drake stands for defense, they found out the hard way Saturday afternoon in the Welcome Stadium wind tunnel.

Drake University, the defensive demons from Des Moines, arrived in town leading the Pioneer Football League in every defensive category except preventing the opposition from drinking Gatorade.

When the game was over and there was nothing left in Welcome Stadium but flying soft drink cans in the 40 miles an hour gusts, Drake owned a 28-17 victory.

The Flyers were up against a defensive wall that leads the PFL in seven categories and is second in three others.

One of their specialties is preventing first down on third down — the opposition has only a 31 per cent conversion rate on third down.

They were even better against the Flyers, who fell to 3-and-5 overall and 2-and-3 in the PFL. UD faced 13 third down situations and converted only two.

Drake came in holding opponents to 108 yards rushing per game, an amount Dayton runnin back Tucker Yinger usually piles up by himself. 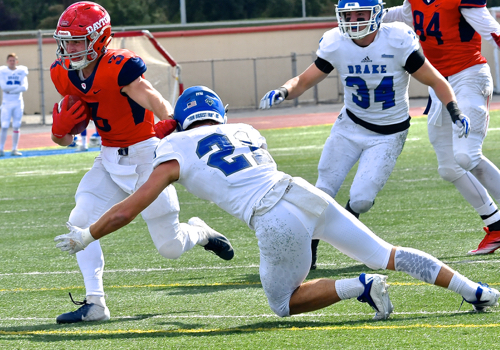 Not on this day, not against Drake. The Flyers rushed for only 103 yards on 30 tries. Yinger? He is a marked man by all teams these days and on Saturday he carried 11 times for 46 yards.’’

Drake came in giving up 170 yards a game passing. UD freshman quarterback Jack Cook threw for 194 after throwing for a school record 432 yards last week at San Diego. On this wind-blown afternoon he was 14 of 35 and didn’t throw a touchdown.

While the Flyers couldn’t buy a first down on third-and-anything if they had $100 bills pasted on their helmets, Drake converted six of 14.

They were particularly efficient on a third quarter drive that turned a 14-10 lead to 21-10. They traveled 77 yards in 13 plays, eating 6 1/2 minutes off the clock. Along the way they were four-for-four on third down.

—They had third-and-nine at their 34. Quarterback Grant Kraemer threw an incomplete pass, but Dayton’s David Leisring was flagged for interference. That gave Drake a first down at its 37. 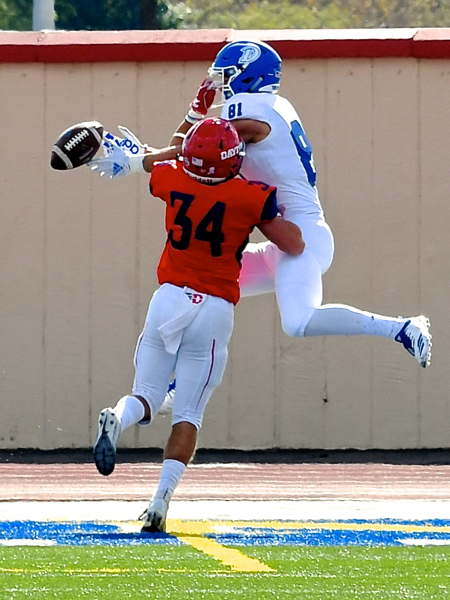 —They had third-and-three at the Drake 44. Running back Drew Lauer, a hard-pounding load, banged five yards off tackle for a first down at the Drake 49,.

—They had third-and-seven at the UD 48 and the Flyers had quarterback Kraemer surrounded, ready to put a ribbon with a bow on him and put him in a sack. Somehow he escaped right up the middle for 14 yards and a first down at the UD 34.

—Then came the back-breaker, the biggie, the game-decider. Drake was third-and-three at the UD 27. Kraemer hit Devin Cates straight down the middle for 24 yards and a first-and-goal at the three.

Early in the fourth quarter a bad snap in the shotgun formation eluded UD quarterback Jack Cook and Drake recovered the loose ball at the Flyers 12. On the next play, Lauer swept left end without a finger placed upon him, a touchdown that made it 28-10 with 14 minutes left and it was only a matter of time, about 14 minutes worth.

Lauer, a 198-pound senior, pounded away at the Flyers 28 times for 136 yards and two touchdowns. 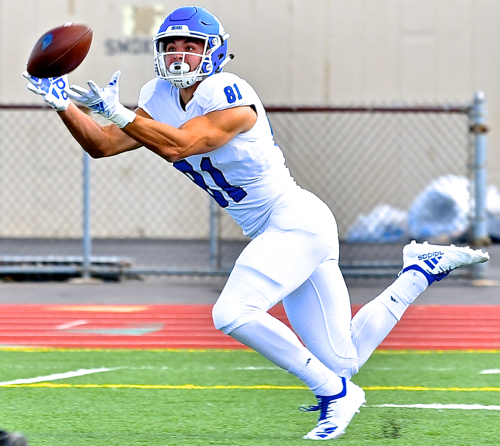 Despite the wind that so bothered Cook, Drake quarterback Kraemer was 21 of 33 for 217 yards and two touchdowns. He has 18 touchdown passes this season, second in the nation.

His primary target is 6-foot-3 senior wide receiver Steven Doran. He caught six passes for 93 yards and two touchdowns, giving him eight touchdowns on the season, which places him in the top ten in the country.

When told that his Flyers were 2 for 13 on third down conversion tries, coach Rick Chamberlin was neither shocked nor surprised.

“And they probably had a high percentage of third down conversions,” he said perceptively. “That was the difference – them converting and us not. I mean, we had them third-and-eight and third-and-nine and they were getting them. That was the tale of this game.”

On Drake’s first possession, on their 2-yard-line after UD punter Sean Smith pinned them there, on the second play they ran in the game, Flyers safety Tim Simon intercepted a tipped ball.

“We never had momentum, we never did,” said Chamberlin. “They had control over us all day. It was ugly. We did not play very well, offensively or defensively. We missed tackles and missed assignments. Guys were not in the right positions, not making plays.” 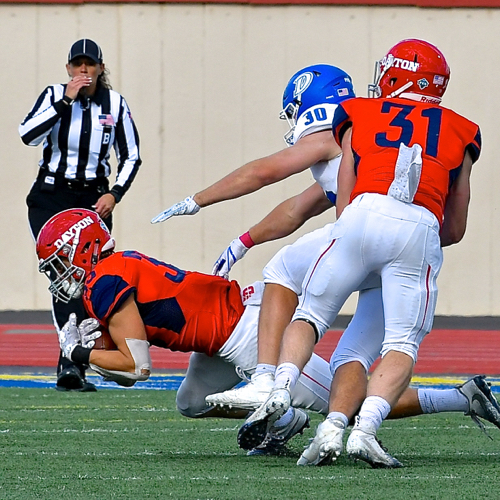 David Leisring picks an interception in the fourth quarter.

And of his freshman quarter, Jack Cook, Chamberlin said sadly, “Jack had a tough day. The wind had a direct effect on both quarterbacks, but Drake’s quarterback (Kraemer) got himself adjusted and made better throws in the second half. Jack was never able to make the throws.”

Making matters even more difficult is that Chamberlin nearly had to ask for volunteers out of the stands to play cornerback. At one point, safety Brandon Easterling was switched to corner.

And to make certain they had bodies, freshman Sam Broom transferred jerseys from No. 3 to No. 16. Wide receiver Ryan Skibinski wears No. 3 and Broom, not expected to play, was also wearing ‘3’ until the halftime switch. 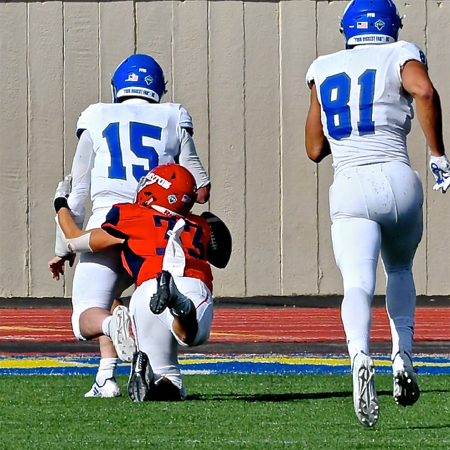 “We are running out of cornerbacks,” said Chamberlin. “Christian Kelly hurt an ankle in practice, Jason Balogh hurt his shoulder in this game. All we had left was a freshman who just practiced a little bit this week. It’s that time of year when guys are banged up and you don’t have your best out there.”

The best, defensively, on this day was safety Tim Simon, who in addition to the interception, had 15 tackles, six of them solos. Linebacker Zach Pipoly was in on 14 tackles, two unassisted.

And it is self-evident that when your punter kicks the ball 244 yards, your offense is pretty dormant. Sean Smith, one of the nation’s premier punters at any level, punted five times for a 48.8 yard average, one traveling 54 yards.

That’s an average afternoon for him. He now has 200 career punts and 77 landed inside ther 20 and he has just 20 touchbacks. 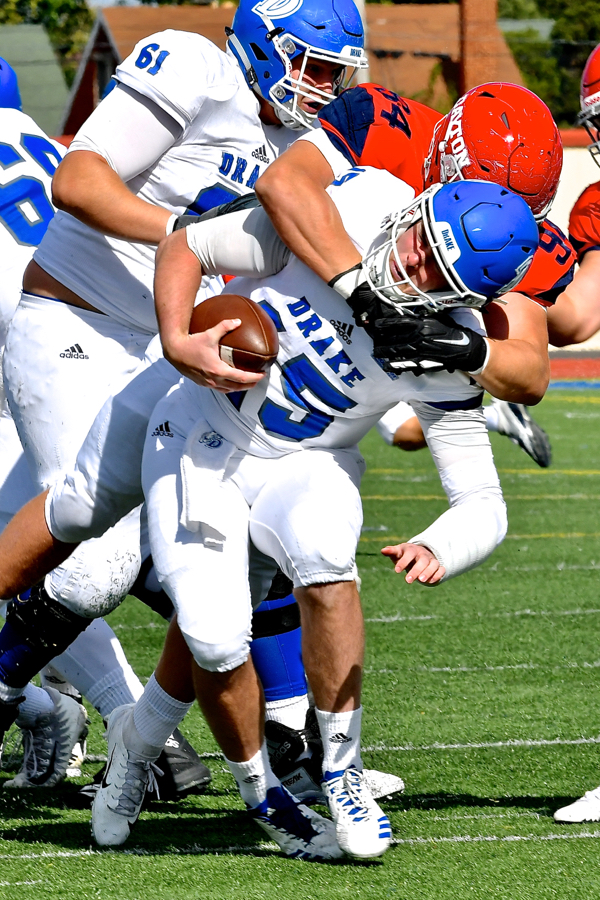 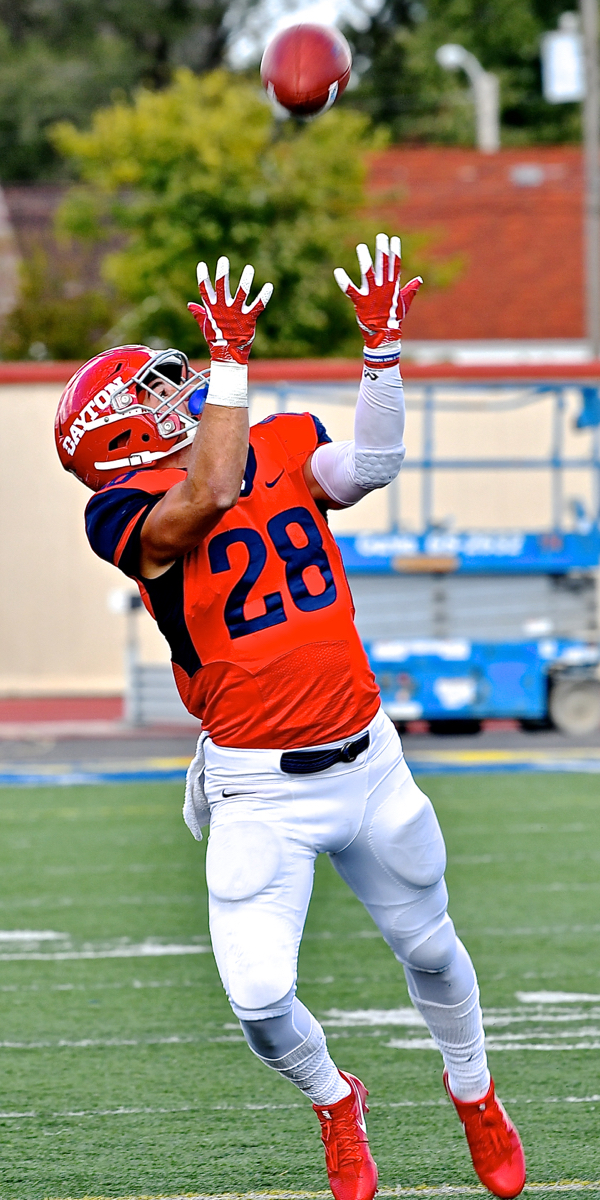